We know that diamond is the hardest, strongest form of carbon on Earth. However, under extreme pressures—similar to those deep inside giant planets such as Saturn or Jupiter—diamond becomes something quite different. In recent experiments, a team of scientists from Lawrence Livermore, Princeton University, and the University of California at Berkeley compressed diamond samples to a density greater than lead at ambient conditions. The team’s experimental results access a previously unexplored region of carbon’s phase diagram.

The research team, led by Livermore physicist Ray Smith, performed its unprecedented experiments at the National Ignition Facility (NIF), which houses the world’s largest, most powerful laser. The researchers used a relatively new technique called laser ramp compression to apply extraordinarily high pressures, up to 5 terapascals, or 50 million times ambient air pressure, to the diamond samples and compress them to almost 4 times their normal density.

Laser ramp compression joins two other methods for applying very high pressures to materials. One uses tiny anvils of diamond to very slowly compress a substance. Diamond-anvil-cell experiments can achieve pressures of 300 gigapascals, or 3 million times ambient air pressure. The other technique is dynamic shock experiments, in which a shock wave whacks a sample, much as a bat does a baseball, sending the material’s density and temperature soaring.

Shock experiments have for years been the standard method for studying the interplay of pressure, density, and temperature, which describes a material’s equation of state (EOS). Every model that explains how a material deforms at high pressures—which occurs in planetary interiors and during explosions—assumes an understanding of the material’s EOS.

However, a model of a planet’s interior cannot be based on EOS data gathered at high temperature. Compression in these bodies occurs from gravitational force over long periods. Those processes are inherently shock free, and thus, the matter remains much cooler than in shock compression experiments. Expanding EOS data into this realm of high pressures and low temperatures requires laser ramp compression, in which researchers carefully control the laser pulse shape to avoid shocking the material and thereby maintain its solid phase. 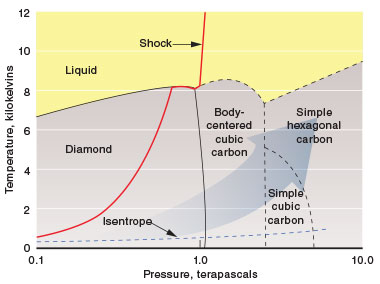 In previous experiments to study other materials at lower pressures, Smith’s team used the OMEGA laser at the University of Rochester’s Laboratory for Laser Energetics and the Janus laser at Lawrence Livermore. (See S&TR, June 2009, A Laser Look inside Planets.) The NIF laser offers unique advantages for performing ramp-compression experiments. NIF allows scientists to arbitrarily control the laser’s energy to customize the pressure wave exerted on the sample and deliver very high-pressure, shock-free compression.

In the NIF experiments, 176 of the laser’s 192 beams converge in the target chamber on a tiny cylindrical hohlraum, creating powerful x rays that ablate the back side of a synthetic diamond target placed outside the hohlraum. The ablation process drives a compression wave through the target. The front of the diamond target is “stepped” to create four thicknesses, ranging from 140 to 172.5 micrometers, to generate multiple data points. The Livermore team used the diagnostic tool VISAR (Velocity Interferometer System for Any Reflector) to record the compression wave’s arrival time and its speed at each step. Iterative Lagrangian analysis of the collected data revealed the stress, density, and sound speed of the diamond at high pressures.

The team had developed a playbook for the laser shots based on detailed modeling using LASNEX, a radiation hydrodynamics code that models the full geometry of the hohlraum, capsule, and interacting laser light during an experiment. However, shots would be occurring in an entirely new realm of pressures and densities. Although considerable experimental data are available up to about 1 terapascal, less information exists above that pressure, and virtually none beyond 2 terapascals.

In four shots, or individual experiments, the team systematically increased the ramp-compression drive from 2.2 to 5 terapascals. The pulse shape used for the first shot at 2.2 terapascals produced some shock in the diamond target. A modified pulse shape eliminated the shock and achieved higher pressures of 2.7 terapascals. The third and fourth shots also did not produce shocks and took pressures even higher to 3.7 and 5 terapascals, which is somewhat higher than the expected core pressure of Saturn. Future experiments are planned to exert pressures on diamond to 7 terapascals, which scientists believe to be the pressure in the deep center of Jupiter.

The Livermore researchers demonstrated that diamond is compressed 3.7-fold at a peak pressure of 5 terapascals. Their findings provided the first experimental data above 3 terapascals for use by theorists and in planet evolution models. The NIF experiments also provided data to improve the predictions of the LASNEX code. In preliminary experiments performed before the final four, scientists determined that LASNEX overpredicted the ablation rate and peak pressure as a function of peak laser power. “The samples did not become as dense as we expected,” says Smith. “They were surprisingly stiff and resistant to being compressed.”

Four sample thicknesses of synthetic diamond are mounted on the outside of a hohlraum capsule in ramped compression experiments at NIF. The layered diamond target absorbs x-ray energy emitted when laser beams converge inside the hohlraum. The x rays ablate the initial diamond layer, which induces ramp compression throughout the stepped sample. Measuring the speed at which each sample thickness moves during the experiment (as shown in the graph) helps researchers better understand material behavior at high pressure. 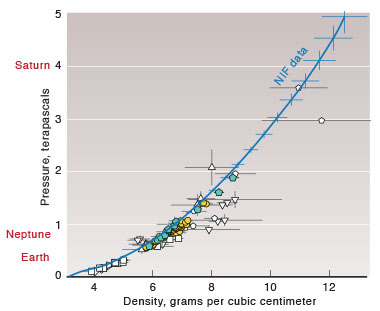 Ramp-compression experiments at NIF have provided the first stress versus density data up to 5 terapascals (blue curve), which is critical information for understanding planetary interiors and adding to the equation of state for carbon. Previous shock compression data are shown as symbols.

In the summer of 2013, a novel x-ray diffraction capability will be used to probe the samples to reveal the changes in their crystal structure at these unprecedented high pressures. The experiments may explain why the ramped samples were less compressible than expected. Furthermore, with measurements of specific changes at various pressures, scientists can begin to develop an EOS for carbon under previously unexplored conditions relevant to those found within planetary interiors.