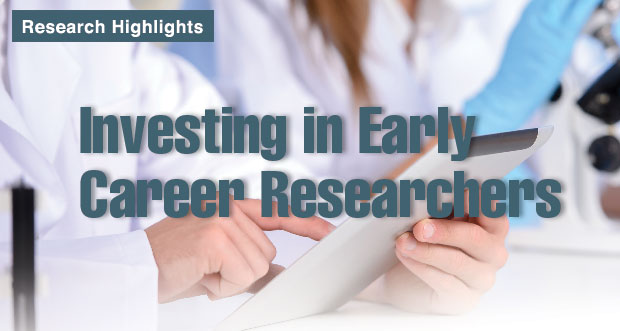 Among the forces driving innovation, scientific discovery, technical advancement, and career development at Lawrence Livermore, none have been as effective as the Laboratory Directed Research and Development (LDRD) Program. Established by Congress in 1991 to maintain the health and technical vitality of the Department of Energy’s (DOE’s) national laboratories, LDRD is the largest single source of internal investment in Lawrence Livermore’s future. Currently funded at about $81 million annually, the program supports about 150 Livermore projects selected through an extensive peer-review process.

A high-priority goal of LDRD is to advance the frontier of basic science in support of the Laboratory’s missions. LDRD-funded projects have made essential contributions to every facet of national security, including stockpile stewardship, high-energy-density matter, high-performance computing and simulation, materials science, chemistry, information systems, biosecurity, cybersecurity, and energy. Many Livermore programs trace their roots to research that began under LDRD sponsorship.

“LDRD is critical for anticipating future needs and avoiding technical surprises,” says Rokaya Al-Ayat, who oversees the LDRD Program as special assistant to the Laboratory director. “Its focus is on high-risk, high-payoff research not yet ready for a program sponsor to fund.” For example, the LDRD Program invested in research advancing biosecurity and biodetection long before they became indispensable tenets of national security.

By any measure, the LDRD Program has been a success. The projects funded by the program have frequently earned national recognition through awards, papers published in peer-reviewed journals, and patents. Roughly one-half of patents and one-half of Livermore’s R&D 100 awards have stemmed from LDRD projects. The program has also been a major vehicle for attracting, training, and retaining new technical staff.

A comprehensive peer-reviewed proposal submission process results in about 10 percent of the entries being selected for LDRD funding annually. The competition is open to all Laboratory scientists and engineers. However, early career scientists and engineers (within 10 years of having received an advanced degree), including postdoctoral researchers, are particularly encouraged to apply. Three outstanding recent recipients—theoretical chemist Heather Whitley, physicist Miguel Morales-Silva, and particle physicist Gianpaolo Carosi—exemplify LDRD-funded early career scientists who are making a difference in their fields. In addition, all three have been honored with prestigious external awards: two earned a Presidential Early Career Award for Scientists and Engineers (PECASE), and one earned a DOE Early Career Research Program Award.

Whitley came to the Laboratory in 2007 as a postdoctoral researcher from the University of California at Berkeley. She initially joined a quantum simulations group, where she used supercomputer simulations to study the properties of semiconductor nanomaterials that could eventually be applicable to solar cells and other clean-energy technologies.

Taking advantage of her supercomputer simulation expertise, Whitley collaborated with physicist Frank Graziani on his LDRD effort focused on using simulations to enhance the fundamental understanding of complex plasmas. This project allowed her to work closely with Weapons and Complex Integration (WCI) Principal Directorate scientists and engineers, and she subsequently joined WCI in 2011 as a staff member.

In 2012, Whitley received a PECASE, which is considered the highest honor bestowed by the U.S. government on early career science and engineering professionals. The award recognized her work in applying Monte Carlo techniques to produce very accurate quantum statistical potentials for use in molecular dynamics codes. She currently works to expand the understanding of dense plasma microphysics for both stockpile stewardship and experiments at the National Ignition Facility. The award is providing her with $50,000 annually for five years to continue this research.

Whitley has been a coinvestigator on two LDRD efforts. In the first, with Graziani again as principal investigator, she applied a recently developed massively parallel molecular dynamics code to investigate the validity of specific models for plasma thermal conductivity. In the second LDRD effort, led by principal investigator physicist Robert Rudd, the molecular dynamics code is being extended to include multiscale models for more accurate simulations of transport across material interfaces.

“We’re looking at the atomic level to learn about the physics of atoms, ions, and electrons with our simulations,” says Whitley. “The properties of all matter depend on what happens at this level. We are using simulations to function as a virtual laboratory to achieve high-energy-density regimes difficult to attain experimentally.” The research work will likely benefit stockpile stewardship by providing a better understanding of the physics underlying aging nuclear weapons. “An ideal way to improve codes is to make connections between theory, simulation, and experiment,” adds Whitley.

“The LDRD process is extremely competitive. Although one must devote a great deal of energy to prepare a proposal, it is very worthwhile to receive funding,” observes Whitley. “The LDRD Program provides the Laboratory with a way to bring in new talent and ideas.” 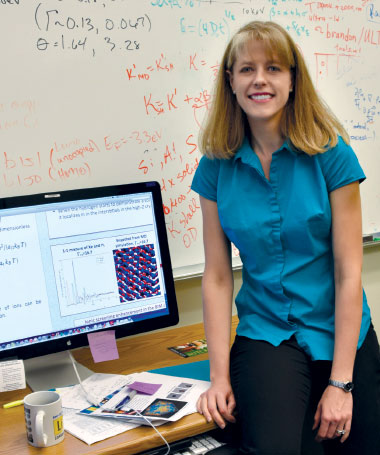 When Hydrogen Becomes a Metal

Morales-Silva joined the Laboratory’s equation of state and materials theory group in 2010 after earning his Ph.D. in physics from the University of Illinois at Urbana–Champaign in 2009. Morales-Silva is the principal investigator for an LDRD project focused on understanding metallic hydrogen.

During graduate school, Morales-Silva worked on a promising but challenging method (quantum Monte Carlo calculations) to analyze the behavior of hydrogen at high temperatures and pressures, in particular when the element exhibits metallike behavior. Livermore’s LDRD Program provided Morales-Silva the funding to pursue this method at lower temperatures (up to room temperature) and very high pressures (2 to 6 megabars). Morales-Silva’s receipt of a PECASE supported his use of advanced computational techniques to study materials at extreme conditions.

Although hydrogen is the simplest element in the universe, it possesses fascinating properties that have puzzled scientists for decades. For example, the electrons of compressed hydrogen tend to delocalize—similar to a metal. “Metallic hydrogen represents the holy grail of high-pressure physics,” says Morales-Silva. Despite decades of efforts from experimental groups, details are lacking about this novel state of hydrogen. “It’s hard to find answers about metallic hydrogen experimentally,” says Morales-Silva. “We need supercomputers for this research, but our calculation methods are lagging. We must complement experiments by improving quantum Monte Carlo methods as an alternative to first-principles calculations.” He believes the LDRD results will eventually enhance the accuracy of the Livermore codes and models used in stockpile stewardship science. In addition, this research may provide scientists with a better understanding of planet formation.

Morales-Silva says, “The LDRD Program is essential to attracting people doing basic science that will be critical in the future to Livermore programs. I am confident our work will eventually prove useful to the programs. I am doing my best science and writing my best papers.” He adds, “Without the LDRD Program, for someone such as myself who is interested in basic science, the Laboratory would be much less attractive. This LDRD project has helped me become an independent researcher and has provided an important first step in my career.” 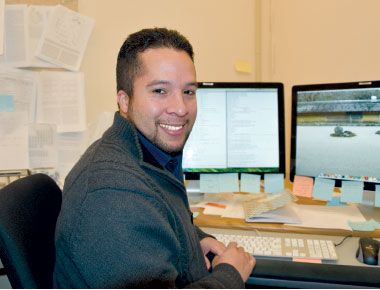 Carosi, who received his Ph.D. from the Massachusetts Institute of Technology, came to the Laboratory in 2006. Carosi was coinvestigator on an LDRD project that ended in 2009, which involved the groundbreaking Axion Dark Matter Experiment (ADMX), established at Livermore with LDRD support. The experiment is now centered at the University of Washington, and Carosi is a collaborator. 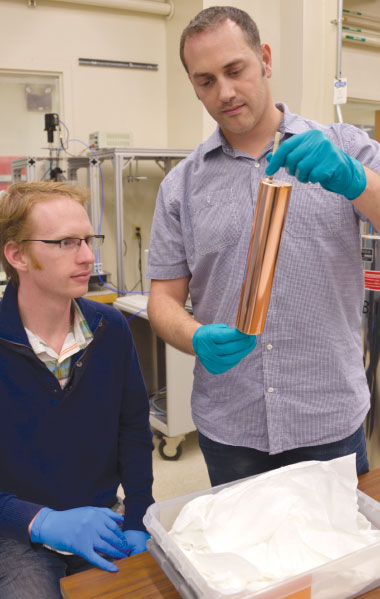 The ADMX research team seeks to detect hypothetical dark-matter elementary particles called axions. Dark matter is estimated to make up about 23 percent of the energy density of the universe, while the remainder is a mysterious, repulsive “dark energy,” which accounts for about 73 percent, and ordinary matter, which makes up only about 4 percent. ADMX is designed to find these dark-matter axions by measuring their decay into microwave-frequency photons in the presence of a strong magnetic field.

Because the expected signal from the decay of axions is so faint (about 10–24 watts), sensitive amplifiers are needed to boost the signal to a detectable level. The LDRD involving Carosi resulted in the design of microstrip superconducting quantum interference devices (SQUIDs), which are tiny rings of superconducting metal that serve as extremely low-noise amplifiers when cooled to near absolute zero. The SQUID amplifiers are designed to magnify the extremely small power signals emitted by axions in a 1-meter-tall microwave cavity structure built by Carosi. This promising approach earned Carosi a 2012 DOE Early Career Research Program Award, which consists of $500,000 annually for five years to continue this research.

“Our SQUID amplifier relies on quantum mechanics to create the quietest microwave receiver possible,” Carosi says. He compares the SQUID amplifier to an ultrasensitive radio that minimizes the static hiss from background noise to allow very weak, distant stations (from the decay of axions) to be heard. Discovery of an axion would further our understanding of dark matter, the nature of quantum physics, and the force that binds atomic nuclei. SQUIDs also have potential applications in oil exploration, brain imaging, quantum computing, and secure communications.

Carosi was also part of another LDRD effort that was led by physicist Adam Bernstein to develop rare-event detectors for nuclear science and security. This project focused on detecting neutral particles such as neutrinos and antineutrinos emitted by nuclear materials and reactors. “We eventually would like to build a worldwide neutrino monitoring program,” says Carosi. Remote nuclear reactor monitoring using advanced detectors could revolutionize global nuclear nonproliferation efforts by monitoring reactors hundreds of kilometers away and detecting fissile material from hundreds of meters away.

Carosi compares Lawrence Livermore’s LDRD process to national competitions for federal research funding. The competition is stiff, and only the very best ideas are awarded funding. He says, “It’s one of the most important factors that attracts postdocs, and it allows risky new ideas to percolate.” Al-Ayat adds that LDRD funding allows young scientists to explore basic science questions and then move on to become an integral part of Laboratory programs important to national security. For both early career and well-established scientists, the LDRD Program continues to be prized for keeping the Laboratory’s research atmosphere vital, productive, and exciting.