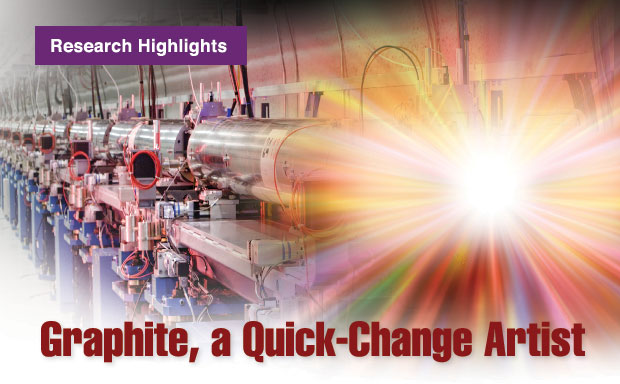 Under the glare of the brightest x-ray beam in the world, graphite crystals “melted” much faster than expected. The process took just 40 femtoseconds—40-quadrillionths of a second. In 1 second, light can travel almost to the moon. In contrast, in 1 femtosecond light can travel through a single sheet of plastic wrap.

LCLS’s tightly focused beam of “hard” x rays is 109 times brighter than previous-generation x-ray sources and 1021 times brighter than medical x rays. The laser’s pulse lengths are very short, and its wavelength is about the size of an atom. These features allow researchers to capture images of objects that are ultrasmall, such as the DNA helix or a water molecule, and that move ultrafast, such as single atoms and possibly electrons.

The laser’s fast-pulse, strobelike beam can capture stop-action shots of moving molecules, revealing details never seen before. Then, almost instantaneously after LCLS images a sample, the sample is blasted to smithereens by the x-ray beam.

Graphite, the softest polymorph of carbon, was chosen for this study in part because its structure is well known. Imaging experiments are important to better understand biological molecules, all of which are based on carbon. Proteins are of particular interest because of their importance in living cells. Scientists generally use x-ray crystallography to reveal the macromolecular structure of proteins. However, success relies on growing crystals of sufficient size, which is often not possible. LCLS offers an excellent alternative for examining many proteins as well as other types of living molecules.

The graphite experiments allowed Livermore researchers to also study materials under extreme conditions (very high temperature, pressure, and density), an effort that relates to the Laboratory’s role in maintaining the safety, security, and reliability of the nation’s nuclear weapons stockpile. A key task for stewardship of the stockpile is to fully understand and be able to predict precisely how materials behave when exposed to extreme conditions. Drawing on decades of experience with weapons, researchers have developed computer codes to model material behavior. The challenge, however, says Livermore physicist Frank Graziani, is to test the codes to ensure their accuracy.

Says Graziani, “LCLS gives us the opportunity to study material properties that are accessible to both simulation and experiment.” Experimental results from LCLS complement those at the National Ignition Facility, which has a laser system that can generate even higher pressure, temperature, and density regimes. 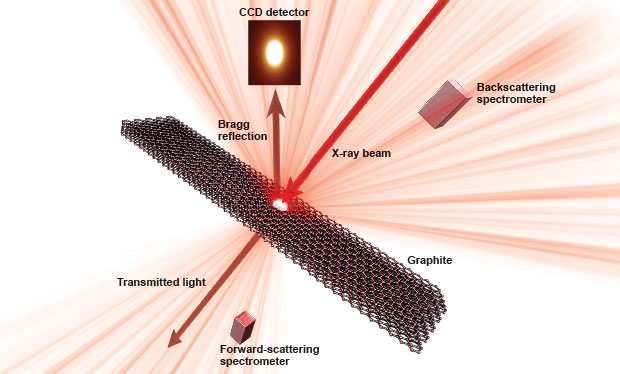 In the graphite experiments, Hau-Riege’s team measured the breakdown of the solid crystal using two characterization techniques. In one method, a charge-coupled-device detector directly images the “Bragg signal” produced by x rays elastically (without change of energy) reflecting off the graphite at an angle precisely determined by the crystalline structure. A second method uses x-ray spectrometers to measure the energy spectrum of scattered photons as the crystal breaks down.

The experiments were performed using 2-kiloelectronvolt x rays in pulses that were 40, 60, and 80 femtoseconds in duration with varying amounts of pulse energy up to 2.8 millijoules. Using the two types of diagnostics and differing pulses, the team was able to extract the time dependence of the interaction process. At low x-ray intensities, the crystal structure stayed intact, and the Bragg signal was very strong. Also, diffuse scattering was weak. With increasing intensities, the Bragg signal degraded as a result of ionization and the motion of the atoms. The diffuse scattered signal increased correspondingly. The combined measurements allowed the team to determine the speed at which the crystal melts through changes in ion temperature.

Two surprises came out of the experiments. First, the Bragg signal dropped off at unexpectedly low levels of peak fluence. For the 40-femtosecond pulses, the team observed a prominently large drop in the Bragg reflectivity (by a factor of 2.5) as the fluence increased above 0.02 kilojoules per square centimeter. A similar effect was not seen for the 80-femtosecond pulses because of a lack of very-low-fluence data. The cause of this drop in reflectivity may stem from phenomena involving the electrons and not solely from the motion of the atoms.

The diffuse scattering spectra gathered in the experiments also revealed that the rate at which the graphite ions heated up was much faster than predicted by simulation models. The elastic-scattering intensity increased with pulse energy and pulse length. The spectral intensity sharply peaked at the energy of the incoming light (2 kiloelectronvolts) because most of the scattering was elastic (a phenomenon called Rayleigh scattering). These data were used to determine the integrated Rayleigh intensity (normalized to the incoming pulse energy) as a function of peak-pulse intensity and pulse duration, and from that, ion temperature was determined as a function of time. 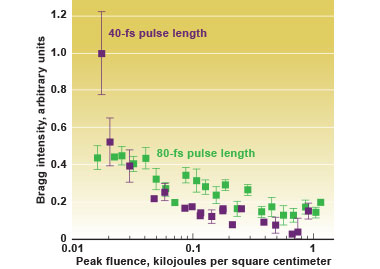 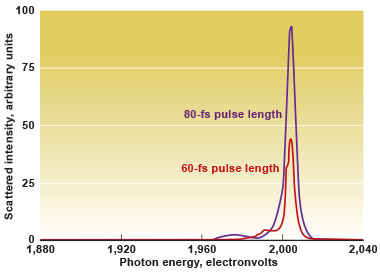 The scattering intensity increased sharply as a function of the pulse length (60 and 80 fs), indicating that rapid heating and transition from crystal graphite to warm, dense matter occurs much faster than theory predicted.

The solid graphite crystal became warm, dense matter—too cold to be a plasma but no longer solid—much sooner than expected. Results from both characterization techniques showed that the solid crystal of graphite transitioned to warm, dense matter in 40 femtoseconds instead of more than 100 femtoseconds as predicted by computer simulations. In simulations using molecular-dynamics models, graphite’s phase changes were significantly underestimated as were the timing and extent of the material’s transformation.

These results may also have introduced a wrinkle in plans to study biological molecules if LCLS disturbs the sample before it can be imaged. However, Hau-Riege is quick to note that “these experiments are just the beginning.” In fact, his team’s experiments at LCLS were some of the first to be performed. Their efforts continue with experiments using silicon.

Hau-Riege gives high praise to LCLS as an experimental tool. “The facility’s hard x-ray beam is the first available to us for experimental use,” says Hau-Riege. “We would not have had these results without LCLS because we previously had no way to detect such phenomena.”