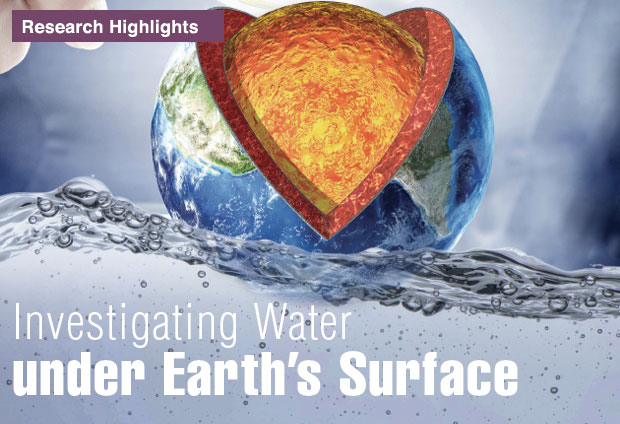 Seen from space, one of the most striking aspects of planet Earth is its vast oceans, covering more than 70 percent of the surface. Scientists have long wondered why Earth is the only known planet in our solar system to retain such large quantities of liquid water on its surface, and whether the answer could somehow be related to the large amounts of water believed to exist inside minerals formed deep in the planet’s mantle. Indeed, samples of minerals transported upwards hundreds of kilometers to the surface through volcanic eruptions have been found to contain water amounting to tens to hundreds of parts per million in weight. (The mantle mostly consists of hot, solid rock and extends from about 30 kilometers below the Earth’s surface to the planet’s molten outer core, which starts at a depth of roughly 2,900 kilometers.)

The mantle’s high pressures and temperatures are believed to force water’s constituents—mainly hydrogen ions (protons)—to become trapped inside minerals’ crystalline lattices. In particular, the presence of protons is believed to strongly influence the physical and chemical properties of mantle minerals. These hypotheses have been supported by experimental evidence that hydrogen at elevated temperatures and pressures similar to those existing within the mantle could be responsible for regions of relatively high electrical conductivity that have been detected in the mantle.

Livermore materials scientist Wyatt Du Frane and his team have provided new experimental data that demonstrate hydrogen’s important contribution to the strong electrical conductivity inside the mantle. The data support the notion that Earth’s mantle contains water—and probably a lot of it. The Livermore team included Ben Jacobsen, Peter Weber, Rick Ryerson, and postdoctoral researcher Davide Novella (now at the University of Cambridge). James Tyburczy of Arizona State University also contributed to the research. The work was funded by the Laboratory Directed Research and Development Program.

The team conducted experiments at both Lawrence Livermore and at Arizona State on olivine, the predominant mineral in the upper mantle, which reaches to a typical depth of 410 kilometers. Characteristically light green in color, olivine has been found to contain water within its crystalline structure. At higher pressures corresponding to greater depths (down to typically 660 kilometers), olivine transforms to minerals with different crystalline structures known as wadsleyite and ringwoodite, which can hold even greater amounts of water. Recently, a crystal of ringwoodite, discovered as an inclusion in a natural diamond, was found to contain about 1.4 percent water. 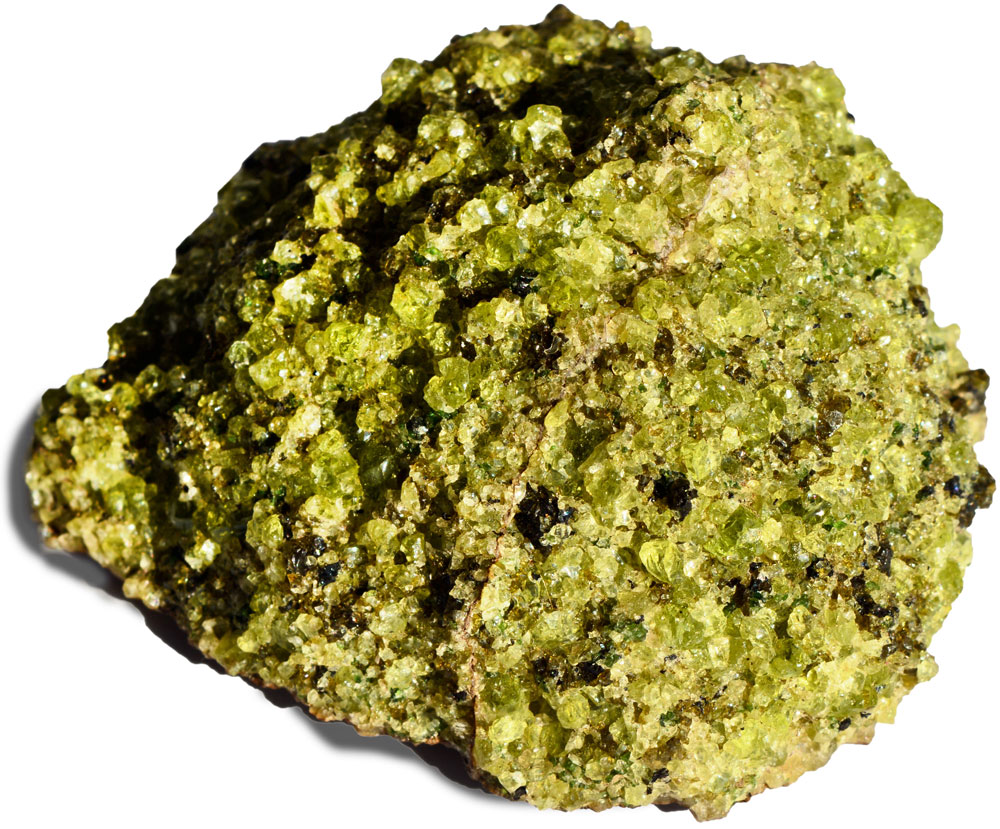 Olivine, the predominant mineral in Earth’s upper mantle, has been found to contain water within its crystalline structure.

First, a sample of olivine crystal was cut and dried at ambient pressure (101,325 pascals, or 1 atmosphere) and a temperature of 1,300°C to drive out any existing water and fix the distribution of electron holes in the ions and atomic vacancies in the crystal’s structure. Second, the crystal was placed into a liquid water bath and exposed to a pressure of 2 gigapascals (equal to 20,000 atmospheres) and temperatures between 700°C and 900°C to saturate the crystal with hydrogen. Third, under the same temperatures and pressure, the sample was placed into a liquid bath of deuterium (hydrogen atoms each consisting of one proton and one neutron). Deuterium acted as a tracer that could be easily followed as it made its way through the crystal, replacing the existing hydrogen ions. The samples were next brought to room temperature, effectively fixing the diffused deuterium in place.

Du Frane explains that hydrogen diffusion is dependent upon the direction it travels through olivine. Consequently, diffusion coefficients are needed for olivine’s three principal orientations—determined by x-ray diffraction—to accurately calculate the contribution of hydrogen ions to electrical conductivity. To attain the spatial resolution required for simultaneously resolving the multiple diffusion profiles, the team turned to the Laboratory’s nanoscale secondary ion mass spectrometer (nanoSIMS) instrument. NanoSIMS analyzes the composition of solid surfaces and thin films by sputtering specimens with a beam of ions and collecting and analyzing the ejected ions to determine composition down to a spatial resolution of 50 nanometers. 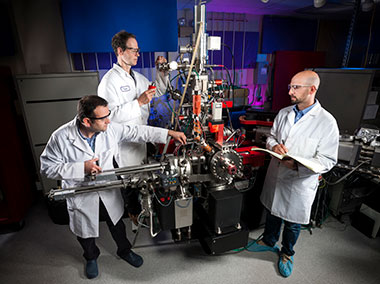 The research team—which includes Ben Jacobsen (left), Peter Weber, and Wyatt Du Frane (right)—analyzed samples with Livermore’s nanoscale secondary ion mass spectrometer (nanoSIMS), which has a resolution 100 times greater than that of conventional SIMS and is one of the few in the nation equipped to handle geologic samples. (Not shown: Davide Novella, Rick Ryerson, and James Tyburczy.) (Photo by Randy Wong.)

With a resolution 100 times greater than that of conventional SIMS, Livermore’s nanoSIMS is one of the few in the nation that can assess geologic samples. The instrument allowed the team to measure hydrogen diffusion in olivine along the three principal orientations simultaneously, showing that diffusion is highly directional—protons travel approximately 10 times more quickly in the fastest orientation than in the other two. Du Frane says, “Our nanoSIMS instrument not only measures deuterium concentrations but is capable of imaging them, as well.” He adds that the team’s development of the nanoSIMS capability to quantify hydrogen accurately is important because hydrogen’s behavior in materials is critical to many Laboratory research efforts. 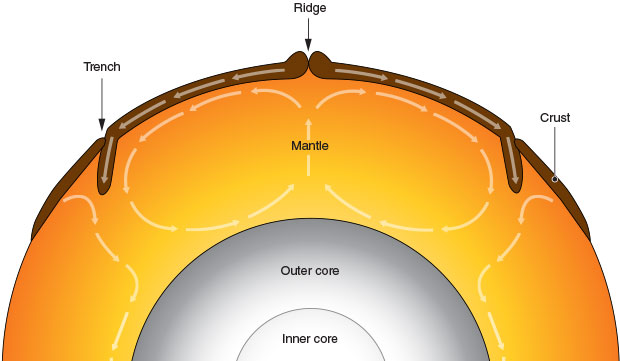 Hydrogen’s proven role in geophysical processes supports the theory that the crust’s downwelling oceanic slabs and upwelling plumes may continuously recycle water contained in minerals between surface oceans and the mantle.

The measurements showed that concentrations of water in the upper mantle can account for the high electrical conductivity values (10−2 to 10−1 siemens per meter) that have been reported by other researchers. The protons are believed to be incorporated into olivine’s complex crystalline structure, occupying vacancies (called defects) where other positively charged ions such as iron and magnesium normally reside. The vacancies are coordinated by surrounding oxygen atoms, which are negatively charged. The protons “hop” from one vacancy to another, conducting current in the process.

Du Frane states, “Our experiments on olivine show that the contribution of hydrogen to electrical conductivity is quite large at the temperatures thought to exist in the mantle.” The experimental results point to hydrogen from water as largely responsible for the physical and chemical properties of olivine and other mantle minerals, including electrical conductivity. The findings suggest that many oceans’ worth of water could be stored inside the mantle at considerable depths. Furthermore, the research is certain to provide a better understanding of water distribution in the mantle because different electrical conductivities can be an effective technique for mapping water distribution. 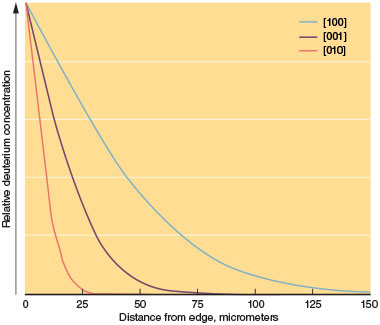 The team measured deuterium diffusion in olivine along the mineral’s three principal orientations, represented as [100], [001], and [010], which correspond to the three different faces of the mineral’s crystalline shape. The results showed diffusion to differ greatly depending on orientation. The graph shows the concentration of deuterium in the crystal of each orientation at a single point in time.

Plate tectonics are the result of deep mantle convections, evident as upwelling plumes and downwelling oceanic slabs. These convections are imaged by seismic tomography, which is similar to ultrasound imaging. Hydrogen is known to alter the physical and chemical properties of olivine and other mantle minerals, so its presence in the mantle would significantly affect large-scale geophysical properties such as plate tectonics, deep earthquakes, and volcanic activity.

“Hydrogen changes all the physical properties of the mantle,” notes Du Frane. For example, the element weakens silicon–oxygen bonds, reduces melting temperature, and moderates the flow of molten materials. Hydrogen’s all-important role in global geophysical processes supports the theory that downwelling oceanic slabs and upwelling plumes at mid-ocean ridges, volcanoes, and hotspots may continuously recycle water between surface oceans and the deep mantle. Indeed, the mantle could contain as much water as all of Earth’s oceans combined.

Du Frane states that a better understanding of present-day hydrogen distribution in Earth’s mantle could also advance scientific understanding of Earth’s origin and evolution, including how our planet has managed to retain its oceans. Livermore’s hydrogen-diffusion technique is sure to help determine the mechanism and rate of proton movement through the crystal lattice structures of olivine and other mantle minerals. With such information, researchers could infer regional water content from geophysical measurements of electrical conductivity.

Du Frane states, “Carl Sagan famously stated we are all made of ‘star stuff.’ If all planets were made from the same star stuff, why are they so different today? Expanding our understanding of the chemistry and physics of mantle minerals will help answer such fundamental questions. Although Mars and Venus exhibit evidence of water in their distant past, Earth is the only planet in our solar system that has retained its oceans and the only planet known to have plate tectonics. Planets might exist elsewhere in the universe that also possess vast oceans of water. Understanding the evolution of water on Earth therefore informs the possible evolution of other Earthlike planets.” As candidates of exoplanets that could contain surface water, Du Frane cites the recently discovered TRAPPIST-1 system, which consists of seven Earthlike planets 40 light years away. In addition, Jupiter’s moon Europa and Saturn’s moon Enceladus are thought to harbor oceans of water beneath icy crusts. Experiments in the laboratory are bringing Earth’s depths and distant exoplanets into closer focus.