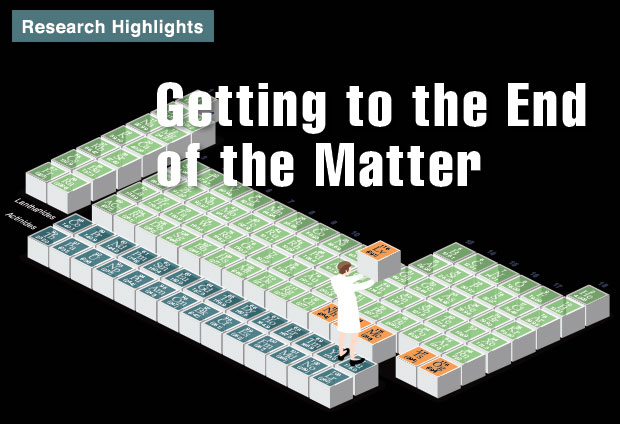 The current periodic table of the elements shows the newly named elements (numbers 113–118) in the lower right. With the naming of elements 113, 115, 117, and 118, discovered by the Livermore–Dubna collaboration, the seventh row of the table is complete. If heavier elements were to be discovered, element 119 would begin a new row.

Getting to the End of the Matter

The number 118 is higher than 117, but the search for superheavy element 117 may have tested the ingenuity and resolve of the scientific community more than did element 118. Finding these and other superheavy elements of the periodic table—those with an atomic number (Z) greater than 104—is a matter of close international scientific cooperation, experimental creativity, and pioneering and exacting data analysis. Synthesizing and investigating these elements expands scientists’ knowledge of the chemical and physical behavior of matter.

Six Russian and American research institutions, including Lawrence Livermore National Laboratory and Russia’s Joint Institute for Nuclear Research (JINR), located in the city of Dubna, collaborated on the discovery of element 117. The paper announcing 117’s detection was published in April 2010, whereas evidence for the heavier element 118 had come out four years earlier, the result of work done by Livermore and Dubna, in part because the target isotope used to generate 118 is longer-lived and easier to obtain.

Superheavy elements have very brief half-lives—the time required for a quantity of the element to decay by one-half, often measured in seconds to milliseconds. Synthesizing these elements requires accelerating beams of neutron-rich ions at a target coated with a high-Z element. Among the collisions that follow, a few—less than a dozen out of 10 billion billion (1019)—will form atoms that promptly decay by emitting alpha particles—helium ions containing two neutrons along with the two protons. For instance, an atom of element 117 decays into 115 by emitting an alpha particle, thereby losing two protons, then 115 decays to 113, and so on, until the nucleus fissions into two fragments. Each alpha particle’s position, energy, and formation time can be measured. The whole cascade produces a set of decay products unique to the element created during the initial collision. From the decay products researchers can thus determine the original element.

To generate just a few atoms of 117, the team needed to bombard a target coated with berkelium-249 with a neutron-rich beam of calcium-48 ions. Oak Ridge National Laboratory’s High-Flux Isotope Reactor (HFIR) generated the berkelium-249, a rare isotope with a half-life of 320 days, producing just milligrams. HFIR shipped the isotope to the Research Institute of Atomic Reactors, which made berkelium-coated targets and sent them to Dubna, where the experiments were performed. The clock was ticking—everything had to be completed before too much of the short-lived berkelium decayed.

Finding One Event in a Billion Billion

Now the ion beam bombards the target for months, during which the collected data are analyzed in real time. Proving a decay chain observed during an experimental run represents atoms of a new element is as much a matter of mathematical analysis and ruling out other possibilities as of observation. “In general, it takes about one billion random events before you see something that looks like the first true event,” says nuclear chemist Nancy Stoyer, a member of the team focusing on superheavy elements since 1995. “Our concern was the event’s random probability—was it real or random error? We wondered if we could use the data itself. Could it tell us the chance that the event was a random one?” Stoyer and her husband, nuclear chemist Mark Stoyer, along with other members of the Livermore team, pioneered the development of probability-based analysis methods for the superheavy element search.

“Element 117 has a long decay sequence,” says Mark Stoyer. “It decays rapidly, so its random probability is very low. One of Livermore’s most important contributions to the collaboration was the use of independent data analysis to verify the claim of discovery—a group at Dubna and one at Livermore checking each other’s results. We also introduced random probability analysis.” For 117, Livermore was joined by colleagues at Oak Ridge, Vanderbilt University, and the University of Nevada at Las Vegas. The team developed methods of simulating billions of nuclear events by generating them randomly using Monte Carlo calculations. Thanks to the careful analysis, the Livermore and Dubna groups were able to demonstrate that the decay chains observed in Dubna were real events, not random error of the detection method. Livermore’s Roger Henderson conducted the data analysis that identified element 117. 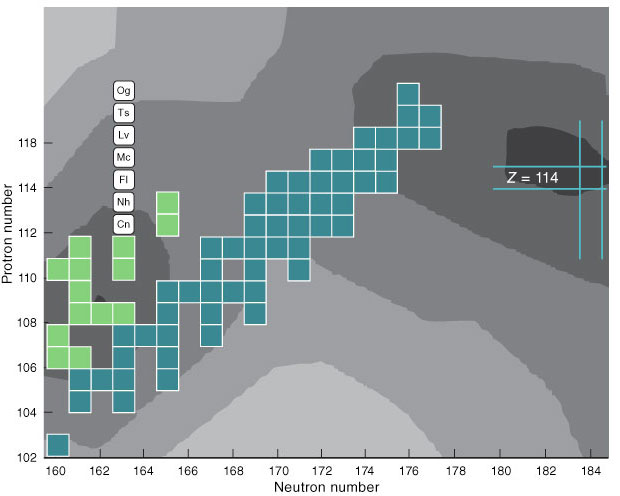 The island of stability is where nuclear chemists from Livermore and Dubna hope to find superheavy elements with half-lives longer than the millisecond timescale—perhaps long enough to be chemically useful. A portion of the table of isotopes focusing on the heavier isotopes is shown. Each colored box represents a synthesized isotope, with darker green representing the over 50 isotopes observed by the Livermore–Dubna collaboration, which was involved in the discovery of new elements nihonium (Nh), flevorium (Fl), moscovium (Mc), livermorium (Lv), tennessine (Ts), and oganesson (Og). [Copernicium (Cn) was discovered by Germany’s GSI Helmholtz Centre.] A darker gray background indicates a longer half-life. Heavier, more stable isotopes are theoretically possible near a proton number (Z) of 114.

Following a multiyear, multilaboratory process of verifying results, the International Union of Pure and Applied Chemistry (IUPAC) agreed that the evidence added up to the detection of new elements. After an IUPAC release last June listing proposed names for public comment, the elements’ new names have now become official. Oganesson, 118, is named for Yuri Oganessian, the leader of the Dubna team credited for discovering six elements altogether. Tennessine, 117, honors Tennessee, the home state of Oak Ridge, which has provided nuclear materials in superheavy element discovery for many years. Element 115 is now moscovium, also observed during the Dubna–Livermore collaboration. For element 113 the IUPAC approved the name nihonium, giving credit to a Japanese laboratory for a different isotope than that observed in the Livermore–Dubna experiments.

These four elements now join livermorium (116), named for the city where Lawrence Livermore is located, and flerovium (114), named for Georgy Flerov (the Russian founder of the Dubna laboratory), as the newest additions to the periodic table. The six elements, all discovered or observed by the Russian–American collaboration, fill out and complete the seventh row of the table.

The predominance of American and Russian names in the newest elements reflects the strength of collaboration between Livermore and JINR that began in 1989. Ken Hulet founded the group at Livermore, and over the years leadership passed to Ron Lougheed, Ken Moody, and then Dawn Shaughnessy, currently leader of Livermore’s Nuclear and Radiochemistry Group. The Laboratory Directed Research and Development (LDRD) Program funded much of the research, while the Department of Energy’s Office of Science funded some Livermore work, as well as Oak Ridge efforts to produce the isotopes needed for the 117 experiment. (See S&TR, October/November 2010, Collaboration Expands the Periodic Table, One Element at a Time.) 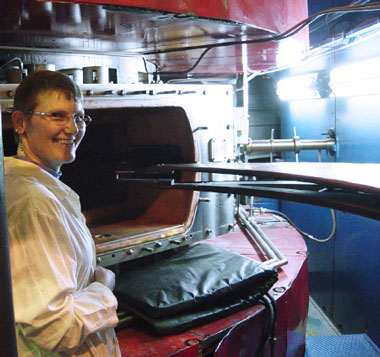 Livermore nuclear chemist Nancy Stoyer stands in front of the U-400 Cyclotron during a maintenance period at the Joint Institute for Nuclear Research in Dubna, Russia, where many superheavy elements were first synthesized and observed.

The Future of Superheavy Element Research

The discovery of these new elements is part of a larger puzzle. Many fundamental questions remain about the limitations of matter and its chemical behavior at the far end of the periodic table. Shaughnessy and her colleagues are focusing on the chemistry of the new elements. Shaughnessy says, “Element 114 [flerovium] is the Holy Grail, because of the many predictions about its chemistry—some say a metal, some say a noble gas—and because one of its isotopes has a half-life of about two seconds, long enough to enable study. Performing the experiments would not be trivial, but ways exist to do the chemistry.” In 2017, an LDRD-funded project led by Livermore postdoc John Despotopulos will study the aqueous chemistry of flerovium to establish the techniques for studying the chemistry of isotopes that are manufactured in a particle accelerator and subsequently transported into a liquid-containing reaction chamber.

“As we get to this region of the periodic table, a nucleus has so many protons that relativity affects the behavior of the electrons,” explains Shaughnessy. “The electrons move at speeds approaching a fraction of the speed of light, which increases their mass and causes them to bond differently from other elements in the group. If these predictions of relativistic quantum chemistry are correct, and 114 is not reactive, then science may need to rearrange the periodic table itself to reflect the nature of that bond.”

However, the physics also beckons. Scientists would like to know where the table ends. At what atomic number is it no longer possible to make a new element? Physicist Richard Feynman suggested the periodic table could go to element 137, whereas Finnish chemist Pekka Pyykkö calculates that the elements could range as high as 172. The elements beyond oganesson will fill out the eighth row of the periodic table, where the outermost electrons will begin to populate the eighth shell and its subshells, known as orbitals. Oganesson’s electrons populate the eighth shell’s outermost orbital, 7f, and some elements in the eighth row would have electrons in the g orbital, which has never been observed and which would introduce new and unknown chemical behaviors.

The Livermore team is working with its Russian colleagues to find more isotopes of 118, with the Russians building an additional dedicated accelerator at Dubna. “This will increase the production rate of the superheavy elements by more than an order of magnitude—from 30 to 50 atoms per year to thousands,” says Mark Stoyer. Their hope is to eventually find elements in the island of stability—a zone of the periodic table where elements with much longer half-lives may exist. However, getting there will require collisions between beams of heavier neutron-rich ions and targets coated with actinides, producing new isotopes with far more protons and neutrons, or collisions transferring multiple neutrons or protons between projectile and target—a new technique for super heavy element production. Dubna’s new accelerator will allow the collaboration to try these techniques and open up novel experiments in chemistry, atomic physics, and mass measurement—and perhaps also leading to yet more names on the periodic table.