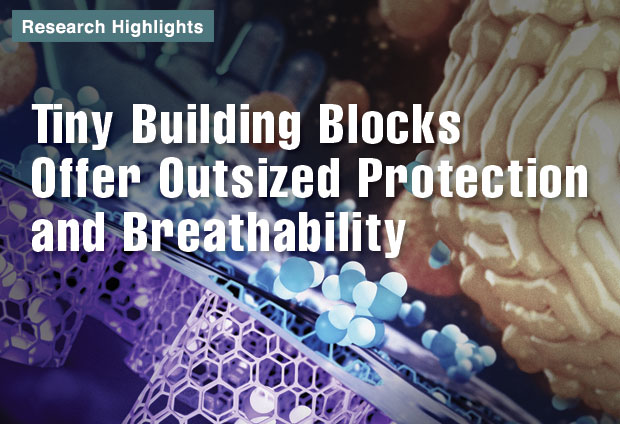 Lawrence Livermore researchers are developing a flexible membrane (purple) with carbon nanotube (CNT) openings that are 5,000 times smaller than the width of a human hair. With the ability to allow water molecules (white and blue) to pass through while keeping out larger molecules, viruses, and bacteria, materials made with this membrane can provide soldiers and first responders with breathable clothing that also allows them to work safely and for longer periods in environments where chemical and biological agents are present. (Rendering by Ryan Chen.)

Soldiers need uniforms that provide camouflage, comfort, and the best possible protection against various forms of attack. With support from the national laboratories, the U.S. military has made strides in recent years in enhancing the protection that helmets and body armor provide against conventional weapons such as explosive devices. (See S&TR, April/May 2012, A Simple Way to Better Protect Soldiers against Head Trauma; and March 2010, A New Application for a Weapons Code.) However, soldiers also need defense against unconventional weapons such as biological or chemical agents, as evidenced by the use of sarin and chlorine in the current Syrian conflict. However, uniform fabrics currently available require wearers to forfeit either protection against biological and chemical hazards or a significant level of comfort. Breathable materials—those that allow efficient transmission of water vapor (sweat) away from the skin—tend to be effective against only a narrow spectrum of threats, while materials that offer increased protection limit the amount of time an individual can work in a potentially contaminated environment without suffering heat stress.

This tradeoff may soon be a thing of the past. Lawrence Livermore researchers Francesco Fornasiero, Ngoc Bui, Eric Meshot, Chiatai Chen, José Peña, and Kuang Jen Wu are pioneering the use of carbon nanotubes (CNTs) to create a base layer material that simultaneously provides biological threat protection and permeability to water vapor and which can be paired with a “smart” surface layer that guards against chemical agents. The team, with support from the Defense Threat Reduction Agency and the Laboratory Directed Research and Development Program, has already attained a crucial milestone in developing this next-generation protective garment by demonstrating that the proposed base layer is highly protective yet remarkably breathable. 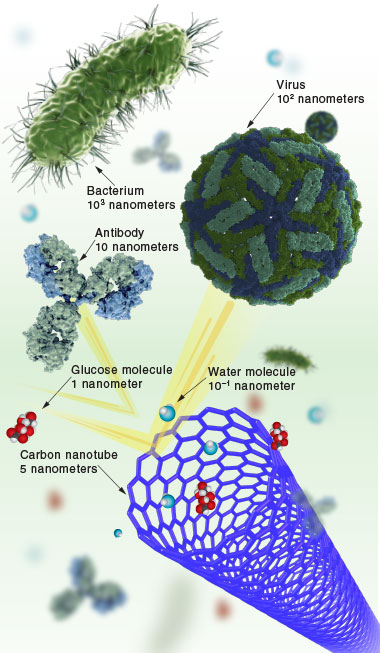 The size of the membrane’s CNT openings is significantly narrower than bacteria and viruses, whose passage is therefore blocked. Moisture—that is, water molecules—can pass through, ensuring breathability for the wearer of the material.

A Forest of Tiny Tubes

CNTs are strong, hollow graphite cylinders that typically measure tens of micrometers long and 50 nanometers or less in diameter. The extremely smooth interior walls of CNTs enable gases and liquids to flow through rapidly. (See S&TR, October/November 2010, Taking the Salt Out of the Sea; and January/February 2007, Tiny Tubes Make the Flow Go.) Thanks to their narrow dimensions, the tubes also block the passage of other, larger molecules. The CNTs used by the team have diameters of less than 5 nanometers—5,000 times narrower than a human hair, and much smaller than bacteria or viruses.

Fornasiero, the project’s lead, explains the team’s material synthesis process. “We start from vertically aligned nanotube ‘forests,’ which are tightly packed arrays of tubes 20 to 30 micrometers tall. Having a high density of nanotubes is crucial for maximum breathability. Then we infiltrate the gaps between the tubes with a vapor-deposited polymer. The deposition from the vapor phase allows the tubes to maintain a vertical orientation when forming the composite material,” he says. CNTs span the thickness of this material, creating many tiny transport channels, while the polymer fill—parylene, an impermeable material often used as a moisture barrier—blocks the passage of molecules in the gaps between the tubes. Mechanical testing has confirmed that the CNT‒polymer membrane is quite sturdy, which is important for a material intended to be worn. Bui notes, “We envision that a protective suit could eventually be made entirely of this material or be comprised of panels of this material.” 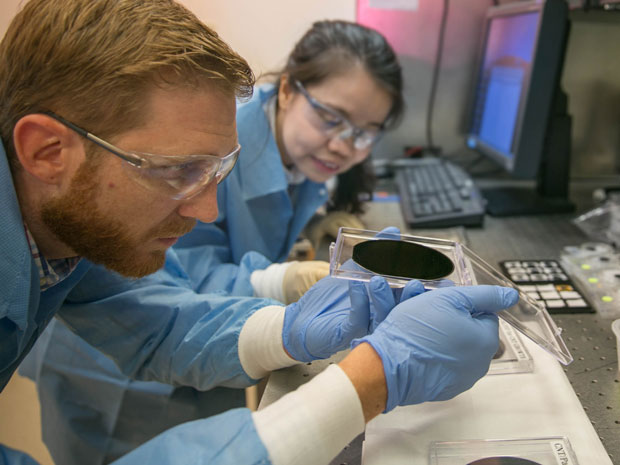 Livermore researchers Eric Meshot (left) and Ngoc Bui evaluate the uniformity of a CNT array on a 4-inch wafer. Gaps between the CNTs are filled with a vapor-deposited polymer to block the passage of any organism or substance excluded by the CNTs.

CNT openings account for roughly 5 percent of the Livermore membrane’s surface area, a higher percentage than has been achieved by most other CNT membrane synthesis projects. This density of passages, as the team has demonstrated, permits exceptionally high perspiration rates through the material. To quantify the membrane’s breathability, the researchers exposed the two sides of the membrane to different concentrations of water vapor. They then measured the rate at which the moisture traveled from the more humid to the less humid side. To allow efficient evaporative cooling of the wearer’s body through perspiration, protective gear must provide a moisture vapor transfer rate (MVTR) greater than 2 kilograms per square meter per day. Livermore’s CNT membranes provided an MVTR some four times greater than this breathability baseline, beating out popular, commercially available breathable materials. The gas-transport rates sustained by the CNTs even exceeded those predicted by gas diffusion theories by more than an order of magnitude.

Fornasiero and his colleagues also tested the material’s protective properties by assessing how well the membrane blocked the passage of different molecules. Potassium ferricyanide ions are only a nanometer in diameter, which is smaller than the CNT openings, so the team expected that these ions would travel through the membrane. However, because these ions and the CNT openings share a negative charge, only about half were let in. Negatively charged dye particles 3 nanometers wide were blocked entirely, most likely because of a combination of size exclusion and charge exclusion, while 5-nanometer-wide nanoparticles of gold coated with polyethylene glycol were too large for the openings and were therefore fully excluded, as well.

As anticipated, Dengue virus suspended in solution could not penetrate the material, either. Although on the small side for a virus, Dengue is, at 40 to 60 nanometers, far larger than the CNT openings. In contrast, the virus freely penetrated the base membrane of a commercially available breathable material, which has much larger pores for water vapor transfer. This test result indicates that such commercial materials offer little to no protection from dangerous viruses.

Illustrations show two possible approaches for a responsive surface layer that could be applied over the CNT material to provide protection against smaller chemical-agent molecules. (left) Embedded “sensors” (threadlike structures) identify a chemical threat, upon which they collapse to close the CNT pores and blocks passage of the agent. (right) A sensor material detects and destroys a chemical agent, upon which the entire exposed section of the surface layer sloughs off.

After confirming that their new membrane combines superior breathability and biological threat protection, the researchers moved on to the next scientific challenge—integrating chemical protection in the same tiny package. Chemical agents are too small for CNTs to block through simple size exclusion, but the membrane can be equipped with a dynamic, protective top layer that performs the task. Colleagues at the Massachusetts Institute of Technology and the University of Massachusetts at Amherst are exploring two alternatives, both of which rely on the concept of a sensor molecule built into the material to identify chemical threats. In one concept, the surface layer reacts to a chemical agent by destroying the threat and then shedding the affected regions. The other concept envisions a surface layer that shrinks or collapses in response to the threat to reversibly seal the CNT openings, temporarily sacrificing breathability for enhanced safety.

“These responsive membranes can effectively mitigate the wearer’s physiological burden by locally switching to a less breathable but more protective state when needed,” notes Fornasiero. The collaboration is currently focused on making this transition from breathable to protective state as effective as possible. If all goes well, U.S. troops could be wearing this “smart second skin” in less than a decade. The suit will likely also find ready adoption among civilian first responders and infectious disease caregivers. Meshot says, “The Laboratory’s mission is national security, and so our team’s goal is to push science capabilities forward to provide solutions that keep people safe, whether in a military or civilian setting.” This remarkable material could protect wearers in a truly diverse range of settings.