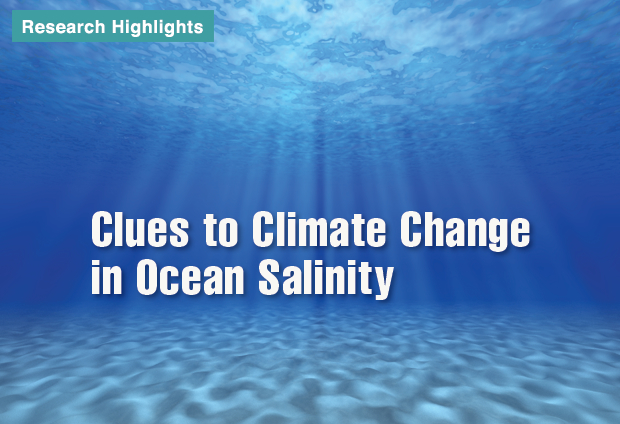 From droughts to floods to water levels in reservoirs, discussions of the effects of changing rainfall patterns tend to focus on the impact that we see on land. However, the oceans cover 71 percent of the Earth’s surface and are the ultimate source of all terrestrial water. Therefore, uncovering changes in rainfall and evaporation patterns over the oceans can provide important clues to the likely effects over land from continued climate change.

An international team of researchers led by Livermore oceanographer Paul Durack is showing how changes in ocean salinity can provide a robust method to understand observed changes in the global water cycle. The team has shown that ocean salinity levels provide a sensitive gauge for monitoring how large-scale patterns of precipitation and evaporation—the most important climate variables—are changing as a result of Earth’s rising surface temperatures, which have increased by an average of more than 0.5 degree Celsius since 1950. The long-range consequences are likely to include more violent storms, more severe flooding, and more intense droughts, which are already at problematic levels in California and elsewhere.

In a far-reaching study, the scientists combined more than 2 million observations of ocean salinity with more than 370 simulations conducted with climate models running on supercomputers to mimic atmospheric and oceanic processes, including precipitation, evaporation, and the resultant changes to ocean salinity. The findings suggest that since 1950, ongoing climate change has caused the entire global water cycle to intensify­. Intensification is characterized by greater rainfall over some ocean areas, which is locally reducing salinity, and by increased evaporation in other parts of the sea, making those areas saltier. In short, oceanic salinity is changing approximately twice as much as had been predicted by the current generation of climate models.

Funded by the Regional and Global Climate Modeling Program in the Department of Energy’s Office of Science, Durack has been researching ocean salinity since 2011 together with scientists from Australia’s Commonwealth Scientific and Industrial Research Organisation (CSIRO). The project is one of several Livermore efforts devoted to understanding and predicting climate change by combining observational data with powerful climate-simulating models developed by researchers worldwide, including Livermore atmospheric scientists.

Scientists have struggled to estimate changes in the water cycle using measurements on land, where rainfall’s sporadic nature, along with the highly variable nature of evaporation, make observing the global water cycle difficult. At the same time, the traditional reliance on oceanographic research vessels to measure ocean salinity has produced accurate but sparse readings collected with a suite of sampling bottles to determine electrical conductivity (which indicates salinity), along with temperature and depth, which are measured concurrently with onboard electrical sensors. Since 1999, however, scientists have had access to automated ocean observations with the implementation of Argo, a global array of more than 3,900 free-drifting floats that measure temperature, depth, and conductivity. These floats have radically increased the amount of high-resolution data available to scientists studying ocean conditions. 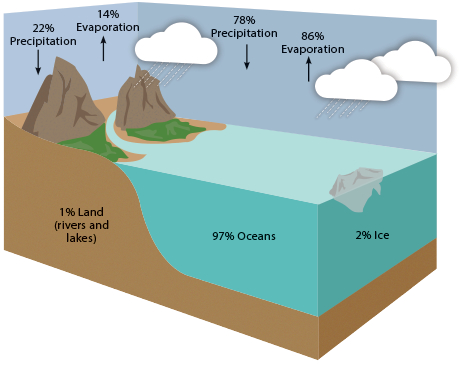 Oceans dominate the global water cycle. Precipitation and evaporation over the sea account for far greater percentages of the totals—78 and 86 percent, respectively—than they do over the continents. In addition, 97 percent of all the world’s water is found in the oceans, nearly all of it continuously moving through the global water cycle. This flow of water into and from bodies of water is being impacted by increasing temperatures and other aspects of climate change.

Salinity as an Indicator

Ocean salinity is measured in the concentration of the salts—mainly sodium chloride—that have entered the water cycle through the weathering of rocks over millions of years. (An indication of our oceanic origins, average levels of ocean salinity broadly match that of human blood.) Regional-scale ocean salinity provides a reliable indicator of long-term changes in the global water cycle because, in a globally integrated sense, it remains essentially constant throughout the 100-year periods over which climate is investigated, changing broadly only over geologic-weathering timeframes of hundreds of thousands of years.

On a local scale, patterns of ocean salinity can change quickly—over hours or even minutes—as fresh water is added by storms or removed by evaporation. However, many centuries are required to redistribute regional salinity changes evenly throughout the oceans because of the vast volumes of water involved. Meanwhile, Durack and his colleagues have reported a clear signature that changes extending deep into the ocean have occurred over the observed record.

The team is also showing how the ocean-driven water cycle is affected by changes in global and regional temperatures. Because of its great heat capacity and enormous mass, the sea has absorbed more than 90 percent of the increase in Earth’s energy associated with atmospheric warming since 1971. “When discussing global warming, we really mean ocean warming,” explains Durack. In fact, the team’s analysis shows that the water cycle has sped up about 4 percent because the ocean surface has warmed 0.5 degree Celsius. 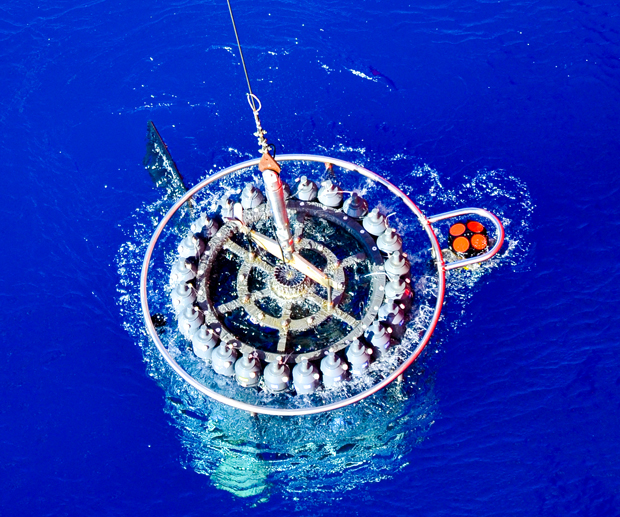 In a suite of sampling bottles, each bottle is programmed to record data at different levels of the ocean—temperature, conductivity (which is used to calculate salinity), and depth profile. This mainstay of oceanography can be deployed to depths of 6,000 meters to study far-reaching changes in temperature and salinity. [Photo courtesy of Steve Rintoul, Commonwealth Scientific and Industrial Research Organisation (CSIRO).]

To analyze current computer simulations and determine how well their results match measurements, the team used climate model simulations from the Coupled Model Intercomparison Project (CMIP) phases 3 and 5. These computer models simulate atmospheric processes, including the water cycle and the effects of human activities and natural phenomena on climate change. The researchers at Livermore’s Program for Climate Model Diagnosis and Intercomparison (PCMDI) assessed the climate models. Leading research on climate change in the atmosphere and the oceans since 1989, PCMDI plays a large role in the coordination and delivery of the CMIP suites and the model data that underpin this resource for the global research community. PCMDI researchers also inform reports issued by the United Nations–sponsored Intergovernmental Panel on Climate Change (IPCC). (See S&TR, June 2012, Seeking Clues to Climate Change.) The importance of ocean salinity in understanding the changing water cycle is cited by the 2013 IPCC report—the latest edition—in which Durack contributed to four chapters. Many other Laboratory scientists were also involved in the IPCC report, and Livermore involvement in the IPCC assessment process dates back to the first IPCC report in 1990.

Broadly matching measurement-based maps of the ocean’s changing salinity fields, the simulations clearly showed precipitation-dominated regions of less-salty water, such as the western Pacific, as well as evaporation-dominated, saltier waters in the subtropics. However, the simulations predicted only about half the measured intensification of the water cycle. Durack and others are studying the cause of this discrepancy between observations and the models. Durack points out that models are, by necessity, simplified versions of reality and may not currently capture all the details of the interaction between precipitation and evaporation and the interactions of both processes in affecting ocean salinity. 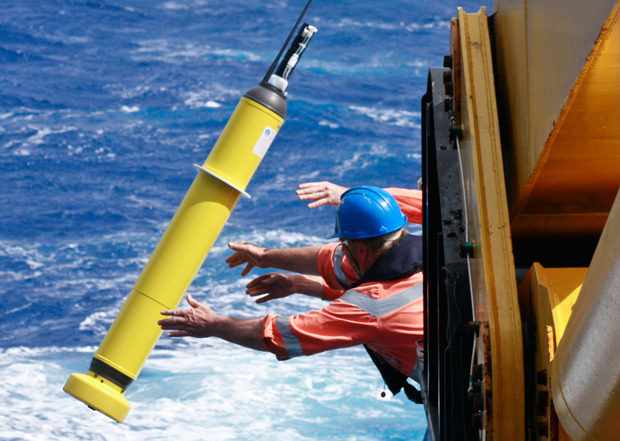 Akin to having a fleet of miniature research vessels, a global flotilla of more than 3,900 robotic profiling floats called ARGO provides crucial information on the upper layers of the world’s ocean currents. In this photo an ARGO float is being launched from a vessel. The aerial at the top transmits data directly to satellites. (Photo courtesy of Alicia Navidad, CSIRO.) 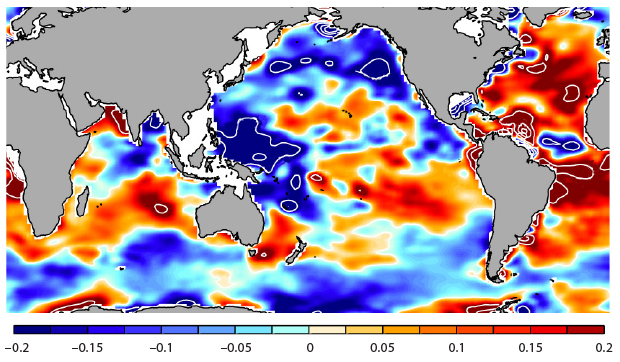 The salinity of seawater near the ocean’s surface has changed measurably from 1950 to 2000. Red indicates regions of the sea that have become saltier. Blue shows those regions where water is now less salty. The cause, suggested by research with computer models and measurements of the oceans, is intensification of the global water cycle—one manifestation of climate change. The unit is salinity change over a 50-year period as measured with the Practical Salinity Scale 1978.

At the same time, Durack notes that model simulations including only natural variability, such as fluctuations in solar radiation and volcanic activity, fail to reproduce the observed changes in global ocean salinity. Only when carbon dioxide and other greenhouse gases associated with human activities are added can the observed ocean salinity and global temperature changes be explained by the computer models. The implications of the team’s overall findings are that as the global temperature rises, an intensifying water cycle—which is already impacting ocean salinity—will also broadly effect terrestrial regions, resulting in more-severe droughts, floods, and storms, including tornadoes and hurricanes. Although precipitation will increase in the tropics and regions already experiencing heavier-than-usual rainfall, drier times are in store for many already dry regions, such as temperate Australia and parts of the United States. The implications for the planet are daunting. “These projected changes will likely affect food and water availability on a global scale,” Durack warns.

A novel and independent evaluation of ocean dynamics and the water cycle was provided by chlorinated fluorocarbons (CFCs) absorbed by the oceans. A human creation, CFCs did not exist in the atmosphere before the 1940s, so their concentrations in the ocean provide insights into how ocean-surface changes propagate into the depths of the sea. In fact, current models tend to match measurements of oceanic CFCs, verifying researchers’ understanding of how changes to net precipitation and the resulting salinity changes can also trigger effects deep in the ocean.

Durack and his team are also investigating the influence of subsurface salinity profiles on ocean density and circulation, as well as how sea level is affected by changes in water density caused by salinity and temperature changes. They are also exploring how to more comprehensively integrate into their work the global ocean-salinity measurements from Argo and two dedicated salinity-measuring satellites that provide near-global daily maps of salinity changes. Clearly, studying the oceans is increasing scientists’ understanding of the water cycle and its strong relationship to global climate change. With global temperatures projected to rise 3 degrees Celsius by the end of this century, the researchers estimate that a 24 percent acceleration of the water cycle is possible. Durack states, “We need to pay more attention to what the oceans are trying to tell us.”