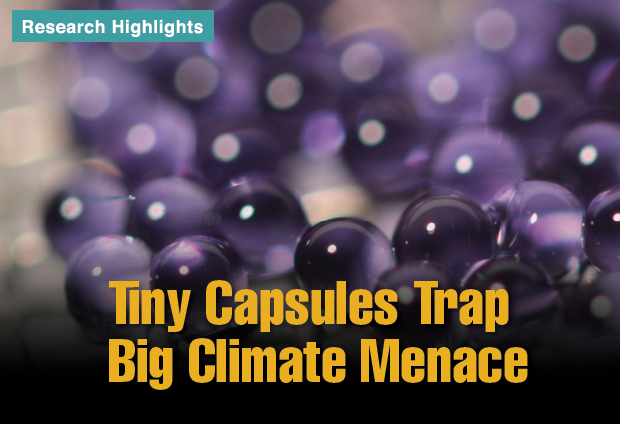 Carbon dioxide (CO2) building up in Earth’s atmosphere from human-made emissions traps more heat each year, disrupting the planet’s climate. Because CO2 is also the primary greenhouse gas emitted by coal-fired power plants, boilers at these plants will soon be required to have control devices that reduce the amount of CO2 they release into the air. (Despite the lack of such controls to date, emissions of CO2 and other greenhouse gases have been decreasing over the past six years.)

In August 2015, the White House rolled out its Clean Power Plan, which establishes the first-ever national standards to limit power plants’ carbon pollution. The goal is to reduce CO2 emissions by 32 percent from 2005 levels by 2030. To help reach this goal, Livermore researchers, in collaboration with colleagues from Harvard University and the University of Illinois, are developing a significant advance in carbon capture. Microcapsules containing environmentally safe carbon-trapping chemicals can boost the speed of capture and the ease of handling far beyond that of conventionally used bulk fluids. This innovative microcapsule technology—the first ever demonstrated for carbon capture and sequestration—is designed to remove CO2 from industrial processes, especially flue gases from coal-fired power plants. The tiny capsules are placed inside a flue to essentially filter the smoke to remove the CO2, which can then be compressed and stored underground rather than being released into the atmosphere. A microfluidics production technique developed at Harvard is used to fabricate thousands of microcapsules in a single run—a big step toward the efficiency needed for industrial deployment of this potentially game-changing technology. 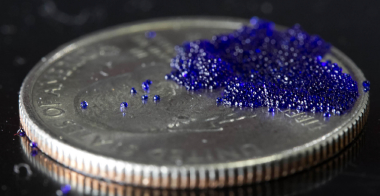 Silicone microcapsules sit on a quarter for scale. The microcapsules contain a sodium carbonate solution that traps carbon dioxide (CO2). In an industrial setting, the capsules could be placed in a flue to absorb CO2 from exhaust gas instead of releasing it into the atmosphere. Once the capsules are saturated, the trapped CO2 is retrieved in a controlled process. The capsules can then be used again.

“We don’t typically talk about it in this way, but CO2 is trash, and we’ve been dumping our trash into the atmosphere for a couple hundred years,” declares Aines. “Regardless of the mechanisms or the amounts, if you dump your trash into something for 200 years, then eventually you’re going to pay a price. And that’s what is happening today.”

Human activities release roughly 30 billion tons of CO2 into the atmosphere each year. Former Livermore engineer John Vericella, who oversaw manufacture of the microcapsules, says, “To put this number in perspective, we produce about 1 billion tons of cereal grain around the world each year. If you multiply that number by 30, that’s how many tons of CO2 gas we’re talking about.”

Compared to the 800 billion tons of CO2 currently circulating in Earth’s atmosphere, 30 billion tons may not seem like much. The problem, however, is that the overall CO2 system is “off balance,” according to Aines. He explains that that the concentration of CO2 in the air has surged greatly in the last two centuries, from 280 parts per million during the pre-industrial age in the early 1800s to more than 400 parts per million in 2015.

“Before humans started producing CO2, the amount that trees and the ocean absorbed—turning it into limestone—was in balance,” Aines explains. “The extra 30 billion tons that we put into the air every year is knocking the system out of balance, and we’re not even sure how much out of balance it is.”

Thymol blue is used as a dye to indicate, with a color change, when the microcapsules are satiated with CO2 gas and ready for swapping out with fresh capsules. These optical images show silicone microcapsules containing potassium carbonate (left) prior to absorption of CO2 gas, (center) following absorption of CO2 gas, and (right) after the trapped CO2 gas has been harvested from the capsules, which can be reused.

Over the last two decades, the traditional approach to capturing carbon at coal plants has been with fluids containing a mono-ethanol amine. This approach, however, is plagued by two fundamental problems: the chemicals not only can become carcinogenic upon release into the atmosphere but are also highly corrosive to pipes and other plant infrastructure.

The microcapsules created by Aines and his team, by contrast, are like tiny water balloons with a shell made of silicone—the same basic material used in a kitchen spatula. Each capsule contains a 200-micrometer-diameter droplet of liquid sodium carbonate, along with a catalyst to speed up the carbon-capture process and a pH sensor to indicate when the microcapsule is full of CO2. As it washes over the capsule, gaseous CO2 diffuses through the silicone shell and reacts with the sodium carbonate solution inside, forming crystalized sodium bicarbonate—otherwise known as common baking soda. The pH indicator changes from a violet-blue color to yellow to indicate when the capsules are saturated.

Like the amines, the microcapsules can be placed inside a smokestack, where each capsule will ideally capture up to ten percent of its weight in CO2. The team is aiming for a benchmark time of five minutes or less for the entire process, from start to saturation. (The faster absorption is, the sooner capsules can be swapped out for fresh ones, instead of the costlier workaround of passing the flue gas over the capsules repeatedly.) Bench and computational testing of the microcapsules suggest that they are close to reaching that mark, declares Vericella.

The team anticipates small-scale use of their microcapsule technique in three to four years and large-scale application at power plants within ten years. The path forward, however, is still not completely clear. “Nobody has used this type of sorbent before for CO2 capture, so we have to figure out the best way to use it,” explains Vericella. “Do we levitate the capsules in a fluidized bed, like ping-pong balls floating in an air-mix lotto machine, using the exhaust from the flue to mix them? Or do we rotate them in drums so they fall over each other while they absorb CO2 and then collect them at the bottom?” Another option is placing the capsules on a mesh inside the flue, similar to the way amines are used today. 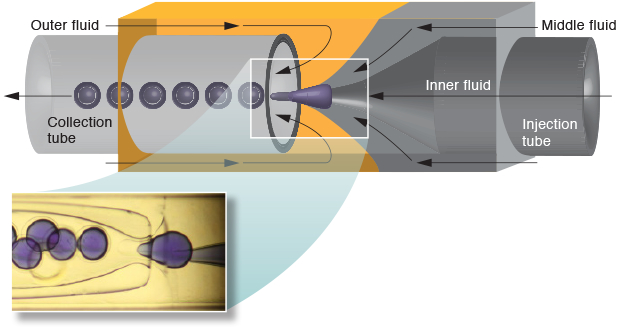 A schematic cross section indicates fluid flows and other elements in the Livermore-led team’s approach to producing many capsules in a single production run. (inset) An actual microfluidics device is shown in operation, injecting a drop of carbon-capturing mixture into individual capsules in rapid fashion.

Livermore environmental scientist Josh Stolaroff is working on the next phase of this project—large-scale industrial application, including the underground storage of captured carbon. Once saturated with CO2, the microcapsules are removed from the flue and heated to approximately 100 degrees Celsius, causing the CO2 inside to unbind and diffuse out through the silicone membrane and into a special tank designed to hold unadulterated CO2.

Through experimental carbon sequestration programs, the U.S. recently passed the milestone of sequestering 10 million tons of CO2 underground with no leaks. Lawrence Livermore has an extensive program devoted to CO2 sequestration, including the related geology. “The trick is to collect the CO2 in pure form,” Stolaroff explains. “It can then be compressed to a liquid and injected deep underground—at a depth of least 3,000 feet—so that it doesn’t affect anything on the surface.”

Stolaroff says one desirable geological formation for injecting captured CO2 is a saline aquifer, where the carbon mixes with the water and reacts with the rocks, eventually forming carbonates. “The whole idea is to keep it out of the atmosphere, but you have to be careful about where you inject it,” he notes. “If it leaked far enough into a drinking aquifer, the CO2 would acidify the water and possibly leach other minerals. But if you select your geology right, it will stay there for hundreds or thousands of years.”

The microcapsules have important advantages over other approaches for CO2 capture. The single biggest advantage is their tiny size, says Aines. This increases their relative surface-area-to-volume ratio, which increases the rate at which they absorb CO2 by an order of magnitude compared to other sorbents of equal mass. “We’ve doubled the speed that CO2 is absorbed with a capsule that’s half the size and costs half as much,” states Aines.

Another benefit is long-term sustainability. The capsule shells have been tested and shown to withstand hundreds of cycles of use, and the team’s goal is to create capsules that can be reused thousands of times before being replaced. Furthermore, the sodium carbonate inside the capsules is mined domestically and is abundant, rather than being made in a complex chemical process, as amines are. Although the capsule’s silicone membrane allows a variety of gases to pass through, the sodium carbonate reacts only with carbon. The silicone material also has no recycling or degradation issues—it can be reused indefinitely, while amines break down in a period of months to years.

“We started off trying to encapsulate the conventional solvents used—the amines—but it didn’t work terribly well,” says Aines. “We discovered that we couldn’t actually speed up the absorption rate of amine, which was already pretty fast. So we decided to see whether we could use a really safe solvent not being used because it was too slow—and that solvent was sodium bicarbonate. It’s a great choice because it’s nontoxic and a material that people are familiar with, so they understand how safe it is.”

The microcapsule technology is a solution to carbon capture that can improve efficiency while also reducing environmental risks. The team is also looking into using other materials with excellent carbon-capturing potential, such as ionic liquids and exotic nanomaterials. “Capturing the world’s carbon emissions is a huge task,” says Aines. “We need technologies that can be applied to many kinds of CO2 sources with the public’s full confidence in safety and sustainability. And that is exactly what we are striving for.”