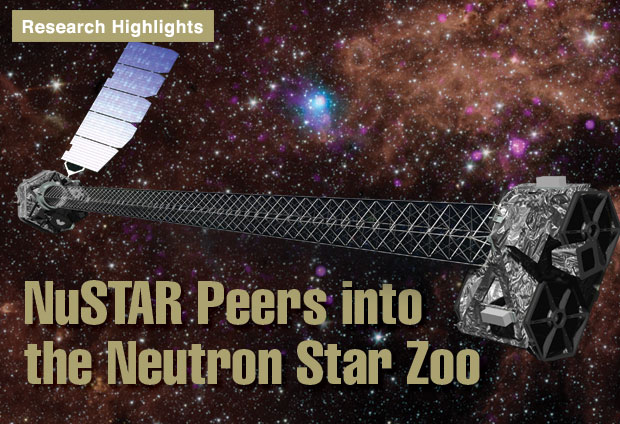 The deaths of stars are not as final as they seem. These often-violent events give rise to exotic stellar remnants that are dispersed throughout the cosmos. Neutron stars, for example, are created when very massive stars (those with a mass between 10 and 30 times that of our Sun) exhaust their supply of nuclear fuel and die in supernovae explosions. The star generated from such a spectacular event has a radius of about 10 kilometers, mass around 1.5 times that of the Sun, and density of roughly 1017 kilograms per cubic meter (close to the density of a black hole). Neutron stars are thus some of the tiniest, densest celestial objects in the known universe, and they exhibit some of the strongest magnetic fields ever observed. As they are born, they spin rapidly, and this spinning in conjunction with their high magnetic fields produces intermittent pulses of intense radio, x-ray, and gamma-ray emissions.

More than 40 years after their discovery in the late 1960s, neutron stars continue to intrigue and astonish scientists. “Neutron stars are extreme objects,” says Livermore astrophysicist Julia Vogel, who works in the Physical and Life Sciences Directorate. “Just imagine something with the mass of our Sun squeezed into the San Francisco peninsula spinning at the speed of a household blender.” Although neutron stars were initially believed to belong to a uniform, simple class of stars, research over the last decade has revealed a “zoo” of objects with remarkably diverse properties and behaviors.

The study of neutron stars has been given a significant boost with the Nuclear Spectroscopic Telescope Array (NuSTAR), a NASA Small Explorer Mission launched in 2012. The technology behind NuSTAR has its roots in Livermore-based research and development. (See S&TR, March 2006, Floating into Thin Air.) With its two x-ray telescopes and advanced semiconductor detectors, NuSTAR achieves sensitivity 100 times greater and resolution 10 times better than previous high-energy satellite observatories.

In 2013, Vogel began leading a Laboratory Directed Research and Development (LDRD) project that uses NuSTAR to study the hard x-ray emission produced by magnetars—neutron stars with extremely strong magnetic fields. Her team, which includes Laboratory scientist Michael Pivovaroff and astrophysicist Victoria Kaspi from Canada’s McGill University, are using data from NuSTAR to delve further into the energetic nature of neutron stars. NuSTAR’s ability to observe emission at higher angular and energy resolutions will help the researchers better understand how neutron stars produce x rays and whether a star’s properties are determined at birth or are influenced by its environment.

“Our goal is to develop a ‘grand unification theory’—an overarching theory of neutron star physics and the birth properties of these objects—to explain their incredible diversity,” says Vogel. “NuSTAR observations are helping us understand these ubiquitous and mysterious stellar objects, which will improve our knowledge of stellar evolution, galactic population synthesis, and the study of matter under extreme conditions.” 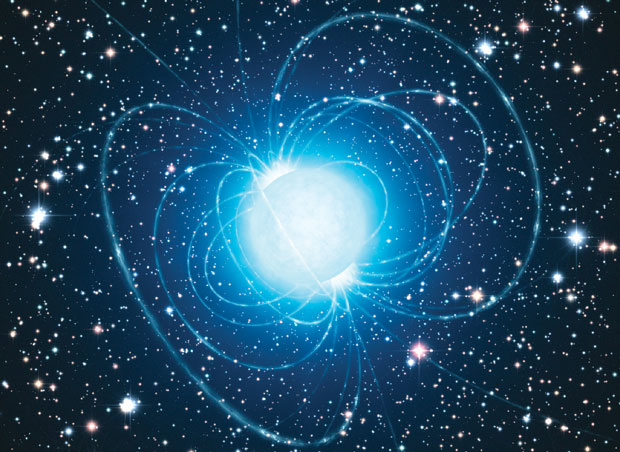 Magnetars, such as the one in this artist’s rendering, are thought to be newly formed, isolated stars that have extremely powerful magnetic fields and emit radiation from their magnetic poles. Their irregular bursts of energy affect their rotational period and visibility. (Courtesy of European Southern Observatory.)

Neutron star types are characterized by the star’s rotational period and the rate at which it slows. By measuring these two properties, scientists can derive the strength of a star’s magnetic field and its age. Most neutron stars were discovered by detecting the radio-frequency signals emitted when kinetic energy is converted into electromagnetic energy (via the stars’ magnetic braking). Because a radio pulsar’s spin axis does not align with its magnetic field, its emissions seem to pulse when viewed from Earth. Radio pulsars are thousands to hundreds of millions of years old, and they exhibit a very large range of magnetic field strengths.

Magnetars, on the other hand, are the youngest neutron stars and have the most powerful magnetic fields among pulsars, measuring up to a quadrillion (1015) gauss. Magnetars also produce emission observable as periodic pulsation, but they spin more slowly than typical radio pulsars, completing a revolution in 1 to 10 seconds instead of 1 millisecond or less. Interestingly, kinetic energy in spinning magnetars is insufficient for explaining the intensity of their energetic x-ray pulses. “Way more energy comes from magnetars than their kinetic energy alone would allow,” says Pivovaroff, whose expertise is in x-ray optics and astronomy. In addition, the temperamental stars are prone to irregular outbursts of electromagnetic radiation that can affect their rotational period and visibility. “We know their location precisely,” adds Pivovaroff. “Yet sometimes magnetars cannot be detected, and at other times, they are really bright, with intensity increasing by a factor of 10 to several hundreds.”

The current theory is that magnetars produce x-ray and gamma radiation through the decay of their inner magnetic fields, but the underlying physics and production mechanisms for electromagnetic generation are not well understood. Previous attempts to study magnetar properties in detail were hindered by the limited imaging capabilities of the available hard x-ray observatories. The hard x-ray band is important because it is a transition region from thermal processes to nonthermal ones. NuSTAR is the first focusing hard x-ray observatory deployed in orbit for measuring energies between 3 and 80 kiloelectronvolts (keV). Its two multilayer-coated telescopes image hard x rays onto a sophisticated detector array, which is separated from the optics by a 10-meter mast. The optics, which the Livermore team helped design, build, and calibrate, are key to NuSTAR’s improved resolution.

During the first year of the LDRD study, the research team created data-analysis tools, including novel algorithms based on existing codes, to interpret the NuSTAR measurements. “Prior to conducting scientific observations, we had the instrument look at well-documented stellar objects as part of our in-orbit calibration efforts,” says Vogel. “We then compared the data to our physics-based computational models, which were designed to predict what we would see in space.”

The NuSTAR team discovered that ground calibration models could not fully explain the instrument’s in-orbit measurements. This finding was not completely unexpected because simplified models were being used to describe extremely complex phenomena. “The calibration data helped us further improve the models and better understand the discrepancies,” says Vogel. “At Livermore, we were responsible for precision metrology, evaluation, and implementation of results into the ray trace modeling.” Ultimately, the NuSTAR team improved the physics models in the simulations, which reduced the discrepancies between model results and observed data to a level comparable to that achieved for other missions. 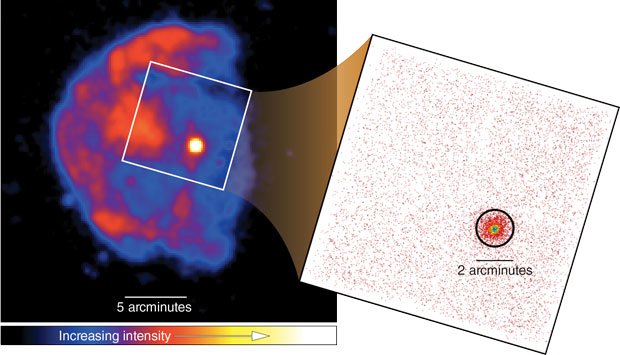 With NuSTAR, researchers can retrieve more detailed images of stellar objects by measuring hard-x-ray emissions. The ROSAT (Röntgen Satellite) Mission, which records emissions between 0.1 and 2.4 keV, captured the left image of supernova remnant CTB109 and magnetar 1E 2259+586 (bright point). The white frame indicates the NuSTAR field of view. (right) Spectroscopic data recorded by NuSTAR in the 3- to 80-keV range provide more details on the magnetar and its environment.

In 2014, the research team focused on detecting and analyzing the hard x-ray spectra from several magnetars. “We took an extensive look at one of the most studied magnetars (1E 2259+586), which prior to NuSTAR had been only marginally detected in the hard x-ray energy range,” says Vogel. Spectroscopic techniques determine what energies are emitted by the magnetars and how the spectra differ for the pulsed and constant emission. “We detected hard x-ray pulsations above 20 keV for the first time and studied the magnetar’s spectrum at higher energies than were previously accessible,” she adds. “The hard x-ray data revealed that additional spectral components, which were not required for lower energy (or soft) x-ray measurements alone, were needed to describe the magnetar’s hard and soft x-ray emission together.”

The team fit the x-ray data obtained from NuSTAR to a recently developed electron–positron outflow model called the Beloborodov model, which could explain the properties and origin of the x-ray emission. “We determined spectral parameters, pulse profile, and pulsed fractions for the NuSTAR data and were able to support the theoretical model,” says Vogel. “Even though current data do not tightly constrain the model parameters, we found that the outflow is likely to originate from a ring on the magnetar rather than from its polar cap, which is surprising.” The team’s findings also support a connection between the spectral turnover and the star’s magnetic fields, consistent with previous observations of other magnetars.

Using a similar analysis approach, the team characterized a newly discovered magnetar. “We obtained the first timing information of the star, showing that its spin-down rate increased without a glitch,” says Vogel, explaining that a glitch is the sudden spin-up or spin-down that can occur when fluid inside a neutron star rotates faster than the star’s crust. “Because no glitch was observed, the increase is likely to be of magnetospheric origin.”

The researchers also analyzed spectra from pulsar wind nebulae. These objects form when charged particles are accelerated to relativistic speeds by the neutron star’s rapidly spinning, extremely strong magnetic fields, and they are shocked when constrained by the environment surrounding the star. Observing pulsar wind nebulae will help the team identify the composition of outflowing matter and the relative amount of energy stored in the outflow particle versus the magnetic fields. “Hard x-ray studies enable us to analyze systems where soft x rays are absorbed by interstellar dust,” says Vogel. “The first observations of the Geminga pulsar wind nebula were used for spectroscopy, and the rotation-powered pulsar was detected for the first time in hard x rays above 10 keV.” 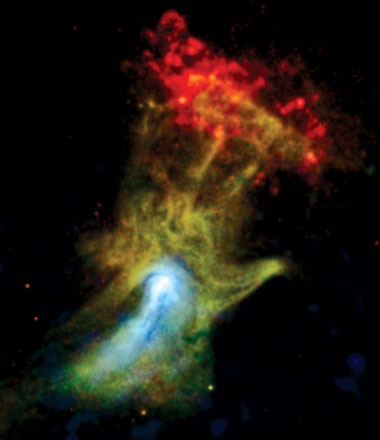 This composite image of the nebula around pulsar PSR B1509-58 illustrates pulsar wind nebulae. Data were recorded by the Chandra X-Ray Observatory at 0.5 to 2 keV (red) and 2 to 4 keV (green) and by NuSTAR at 7 to 25 keV (blue). NuSTAR’s hard x-ray view reveals the central pulsar. Similar images were obtained for Geminga. (Courtesy of NASA, JPL, Caltech, and McGill University.)

“What is being achieved with NuSTAR and Julia’s team is a culmination of more than 10 years of LDRD support,” says Pivovaroff, who worked on the NuSTAR design and helped build the instrument. “Livermore had the long-term commitment and vision to invest in early technology development. Now that it has transitioned into a satellite instrument, we are using the technology to further our understanding of fundamental science.”

As Vogel and her team continue to advance knowledge of neutron star physics, they look forward to resolving other mysteries in x-ray astronomy. “We can leverage the experience gained from NuSTAR for developing the next generation of x-ray telescopes,” she says. “By being involved in building NuSTAR and its science mission, we can gain a better understanding of what capabilities will be needed for future astrophysics research.” As this research continues, Vogel eagerly anticipates the discoveries to be made during the next year. Only time will tell whether the “animals” in the neutron star zoo share a common connection or if each is a breed of its own.