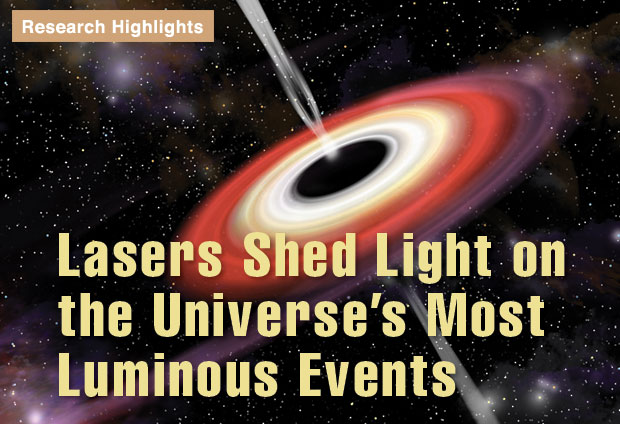 A gamma-ray burst (GRB) is the most luminous electromagnetic event known to occur in the universe, releasing as much energy in 10 seconds as the Sun will over its 10-billion-year existence. A GRB also produces relativistic shock waves, which researchers will soon be able to experimentally study in the laboratory. (cosmicvue - fotolia.com)

Lasers Shed Light on the Universe’s Most Luminous Events

In the 1960s, while hunting for illicit nuclear explosions with gamma-ray-detecting satellites, scientists first spotted flashes of high-energy gamma rays originating deep in space. These flashes are produced by gamma-ray bursts (GRBs), which are known to be the universe’s most luminous electromagnetic events. A typical GRB releases as much energy in 10 seconds as the Sun will over its 10-billion-year existence. Scientists theorize that GRBs are initiated during cosmic explosions, such as those that occur when a massive star collapses into a black hole or two neutron stars merge. However, the process by which the bursts are produced remains something of a mystery.

Scientists suspect the GRB phenomenon begins when high-energy jets of electron–positron pairs collide. (Positrons are the antiparticles of electrons. They have the same properties as electrons except that their charge is positive.) This interaction may then initiate electromagnetic instabilities that create a relativistic (moving at a velocity near the speed of light) shock wave. The wave generates twin beams—jets—of focused energy that travel through space at a similar speed, and if “pointed” toward Earth, produce the signature gamma-ray flash previously recorded by satellites. Establishing whether relativistic shocks are indeed the source of a GRB’s gamma radiation is of great interest to scientists. Indeed, validating this theory would answer one of five outstanding fundamental questions in high-energy-density physics posed by the National Research Council.

Over the last 13 years, Livermore physicist Hui Chen has been leading an effort to develop and refine experimental methods for generating jets of electron–positron pairs using high-intensity, short-pulse lasers. (See S&TR, July/August 2009, Mass-Producing Positrons; and January/February 2012, At the Frontiers of Fundamental Science Research.) Although the total energy and volume of laser-produced jets are a tiny fraction of those in a true GRB, the energy of each electron–positron pair is similar in both. However, the pair density in laboratory-created jets has been insufficient for initiating and studying electromagnetic instabilities relevant to astrophysics.

With funding from the Laboratory Directed Research and Development Program and the Lawrence Postdoctoral Fellowship Program, Chen and her colleagues at Livermore, the University of Rochester, the University of Nevada at Reno, the University of Alberta, and the U.K.’s Atomic Weapons Establishment have been exploring how pair production scales with laser parameters and how to best increase pair density. Their work is bolstering confidence that laser-based relativistic shock wave experiments will soon be achievable. 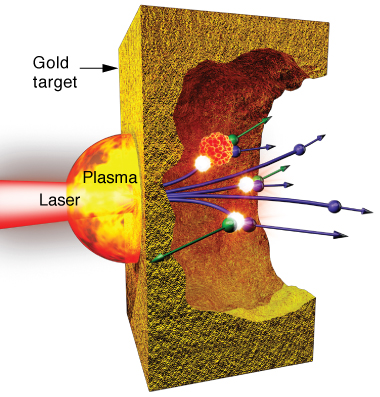 In experiments to produce electron–positron pairs, a short-pulse laser fires a tightly focused pulse at a tiny gold disk. The laser transfers energy to electrons in the plasma in front of the target. As these high-energy electrons interact with the gold nuclei, some of them transfer their energy to high-energy photons, which then interact with the gold nuclei and transform into a lower energy electron (green) and its mirror, a positron (purple). (Rendering by Kwei-Yu Chu.)

By directing short, intense laser pulses onto a millimeter-scale gold disk, Chen’s team has generated billions of electron–positron pairs in the laboratory through a pair production method called the Bethe–Heitler process. In these experiments, the laser pulse delivers energy to electrons in a plasma that forms at the front of the target. These high-energy electrons interact with the nuclei of the gold atoms, which causes electrons to lose energy and emit high-energy photons. The photons in turn interact with the gold nuclei, and some split into electron–positron pairs. The higher the electrons’ energy, the higher the energy of the photons and the greater the likelihood they will produce electron–positron pairs. Electrons escaping from the back of the target produce an electric field that accelerates the accompanying positrons to relativistic velocities. Gold’s high nuclear charge makes for a strong electromagnetic field and substantial acceleration, while the short laser pulse and small targets used in these experiments produce comparatively dense jets.

During the last five years, Chen’s team has performed experiments with the Titan laser at Lawrence Livermore; the Omega Extended Performance (EP) laser at the Laboratory for Laser Energetics in Rochester, New York; and the Orion laser at the Atomic Weapons Establishment in the United Kingdom. Each laser has different capabilities—for instance, Orion can produce the shortest pulses, while Omega EP produces the highest energies—but Chen has closely controlled experimental conditions to facilitate data comparison. Although laser availability has dictated which facilities can be used and when, the variety has had benefits, explains Chen. “Using multiple facilities helps confirm that the results we’re seeing are due to common physics at work.”

The experiments have produced large numbers of pairs—between 1 billion and 600 billion positrons from 10-picosecond (trillionth of a second) laser pulses at Titan and Omega EP and between 10 billion and 550 billion positrons from 1-picosecond pulses at Titan and Orion. The Omega EP experiments in particular set a new record for positron production, yielding 30 times more than any previous experiments. While these results still fall short of what is required for studying GRB phenomena, they have helped the researchers to assess the feasibility of experiments. Comparing the yield data from 54 different experiments conducted at the three facilities using two laser pulse lengths, the researchers calculated the scaling of positron yield as a function of laser energy. They concluded that an increase in laser energy by a factor of 10 should increase the positron yield by a factor of 100.

Particle-in-cell simulations of colliding high-speed jets of electron–positron pairs indicate that (left) creating an electromagnetic instability and (right) forming a shock should be achievable with near-future laser systems. (Color gradients represent the sign and strength of the magnetic field.)

Team member and former Lawrence Fellow Frederico Fiuza—now at SLAC National Accelerator Laboratory—has modeled the interaction of laser-generated pair jets from first principles, that is, directly from physics equations. “These simulations allowed us to understand how many positrons we need to produce to study these fundamental processes in the laboratory,” he explains. First-principles simulations, which track the individual motion of charged particles, electrons, and positrons, and the electric fields they create, tend to require significant computational resources. Fiuza’s simulations were performed on Lawrence Livermore’s Vulcan and Argonne National Laboratory’s Mira machines, which currently rank as the world’s 12th and 5th most powerful supercomputers, respectively.

Using the number of positrons calculated by Fiuza’s modeling and the experimentally obtained results, the team predicted the laser parameters needed for future studies of relativistic shocks. “I had thought we would have to wait many years, probably more than ten, to study the physics of these relativistic shocks in the laboratory,” notes Fiuza. “However, our results show that with the favorable scaling of positron number to laser energy, we may be able to start studying these processes with newly available lasers, such as the Advanced Radiographic Capability (ARC) at Livermore.”

The researchers expect that 10-kilojoule-class short-pulse lasers, including ARC, will boost the number of particles produced sufficiently to enable experiments within the desired shock-physics regime. This prediction will be tested relatively soon. The team obtained approval in December to perform experiments on ARC (see S&TR, December 2011, ARC Comes into Focus; and January/February 2014, Lighting a New Era of Scientific Discovery) in either 2017 or 2018. Chen has been involved in ARC’s commissioning, which was completed last fall, and the capabilities of the powerful and flexible multi-kilojoule short-pulse laser. However, more work lies ahead before the laser will be ready for GRB-related experiments. Notes Chen, “To get from current ARC commissioned levels to what we need for our experiments, we must shrink the pulse both in diameter and in time to create a more compact beam.” Chen is confident that ARC will meet the required levels by the time they conduct the experiments. 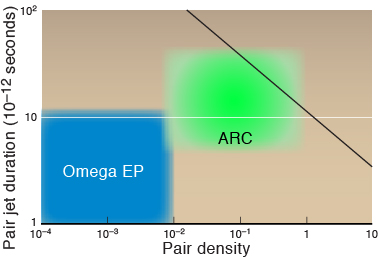 Data from experiments and simulations indicate that Livermore’s 10-kilojoule-class Advanced Radiographic Capability (ARC) laser—as compared with the Omega Extended Performance (EP) laser—may reach the physics regime necessary for studying the electron–positron pair jets thought to be central to GRB physics. (Pair density is the number of pairs per cubic centimeter divided by their relativistic Lorentz factor.) Shocks are expected to form at or above the black line.

Chen’s team is also exploring how to control jet properties and optimize experimental parameters for future studies. For example, the researchers have recently begun experiments to collimate the positrons using an externally applied magnetic field. In these tests, a small circular coil, designed by the University of Rochester, creates a cylindrically symmetric field that acts as a lens to focus the particles. As demonstrated by experiments at Omega EP, this magnetic collimation produces a much narrower beam with a divergence angle of 4 degrees instead of 20, thereby increasing the electron–positron pair density of the jets. Collimation also has other benefits, such as improving the electron-to-positron ratio by 40 fold. To reach the conditions needed for GRB research, the jets need roughly equal numbers of each particle. The team’s next steps will include using stronger magnetic fields for greater jet collimation.

Unraveling how GRBs work is taking ingenuity and time, which is fitting given the millions or billions of light years most GRBs must travel before making an appearance in our skies. Livermore researchers have made important progress by contributing new evidence that the phenomenon can be probed in the laboratory. With the help of a new generation of lasers such as ARC, researchers may gain insight into the evolution and destruction of certain types of stars. This work could also help reveal why more matter than antimatter—antiprotons, antineutrons, and positrons—survived the Big Bang at the start of the universe, when the two were thought to be in balance initially. Observes Chen, “Both the energy and the distance involved in GRBs are so extreme they seem almost beyond science fiction, and yet we are starting to better understand this phenomenon through our experiments in the laboratory, which is very exciting.”