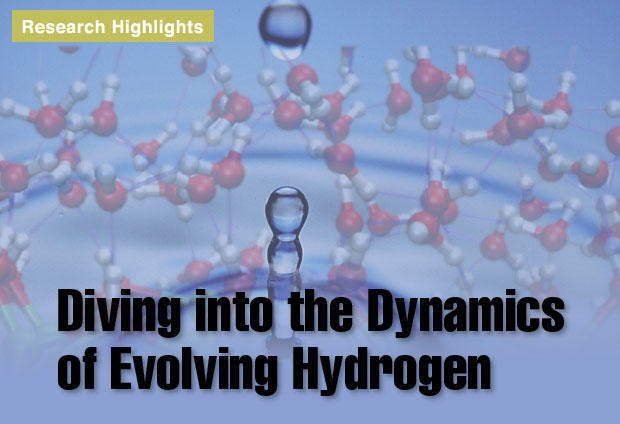 Hydrogen is the most abundant element in the universe and a basic component of water, along with oxygen. An easy, efficient way to split water into hydrogen and oxygen gas with minimum environmental impact could provide our energy-intensive world with abundant fuel for generating electricity and even powering transportation systems. Livermore scientists are studying a process that uses sunlight—another freely available commodity—as the driver for producing hydrogen fuel. In this scheme, sunlight is used to split a hydrogen atom from a molecule of water at the interface with a light-absorbing semiconductor material. The hydrogen atom then combines with another to form diatomic hydrogen gas (H2), which can be harvested as fuel. It sounds simple, but the specific chemical mechanisms that make this process possible are surprisingly complex and not well understood.

Supported by the Fuel Cell Technologies Office of the Department of Energy’s (DOE’s) Office of Energy Efficiency and Renewable Energy (EERE), Livermore scientists Tadashi Ogitsu, Brandon Wood, and Wooni Choi are working with collaborators from the University of Nevada at Las Vegas (UNLV) and the National Renewable Energy Laboratory (NREL) in Colorado to investigate the detailed workings of hydrogen evolution reactions. Ogitsu, Wood, and Choi have developed ab initio simulations to model how hydrogen atoms and ions evolve and react in solution and on various semiconductor surfaces at the atomic level. Through their analysis of the chemistry, structure, and dynamics of this complex, interactive system, the researchers are uncovering the nature of fundamental processes that can contribute to efficient hydrogen evolution, as alternatives to those leading to surface corrosion and degradation. The strategies they are devising with this knowledge are key to the development of durable and cost-effective photoelectrochemical devices that can provide cost-effective, clean energy for the future.

From Water to Hydrogen Gas

One of the goals of EERE is to develop efficient and environmentally responsible solar-to-chemical energy conversion. “It is well established that multiple steps are needed to create hydrogen gas from individual hydrogen ions in solution,” explains Ogitsu. (See the box below.) “Hydrogen atoms adsorbed on the surface of an electrode material play an important role as a reaction intermediate. Hence, we want to obtain a clear understanding of hydrogen adsorption at the atomic level and how this reaction differs from material to material.”

EERE funded the team to study the interface between water and various semiconductor surfaces, taking a close look at the chemistry and dynamics of adsorbed hydrogen on various semiconductor surfaces. In particular, the team studied indium phosphide (InP) and gallium phosphide (GaP)—two materials that are strong contenders in the search to create hydrogen fuel by hotoelectrochemical water splitting. “Solar water-splitting is hard to do efficiently,” notes Wood. “Most systems now being used have a solar-to-hydrogen conversion efficiency less than a few percent. An experimental architecture developed by NREL that incorporates both gallium and indium (GaInP2) has demonstrated a conversion efficiency of about 12 percent. We are looking for ways to pull more energy from this process and make it last much longer.”

Researchers at NREL have been exploring InP, GaInP2, and other advanced solar-cell materials for their acceptability as solar water-splitting materials. One of the challenges researchers have encountered is pinpointing what governs the efficiency of the hydrogen evolution reaction and thus the conversion of water and sunlight into hydrogen fuel. Another challenge concerns the durability of the semiconductors in an aqueous environment that is often harshly acidic. As a general rule, the most efficient materials also corrode the most quickly, often degrading after only a few hours of operation to the point where they are no longer functional.

“To really understand what is happening, we must consider all the complex chemical reactions and how the various elements interrelate over time,” says Wood. “This process had not yet been addressed computationally in any detail, so we looked at the atomic-level interactions between the surface of the solar catalyst–semiconductor materials and the water solution close to the surface.” The team needed to model all parts of the system: the atoms forming the semiconductor surface, including nearby water molecules, and the presence of ions and gas molecules at the semiconductor–water interface. The simulation also needed to incorporate effects of the system’s ever-changing dynamics and kinetics as the semiconductor interacted with the photons from the Sun and the oxygen from the environment, the constituents from the split water, and the other semiconductor atoms on the surface.

(top) Although hopping of adsorbed atomic hydrogen between neighboring surface sites occurs on both gallium-phosphide (GaP) and indium-phosphide (InP), Livermore simulations show that hopping tends to stay more local on GaP because hydrogen forms more rigid bonds with the material. (bottom) InP bonds are looser, allowing the hydrogen to cover more territory in the same amount of time. As a result, InP bonds are more efficient for producing diatomic hydrogen gas, as InP enables individual hydrogen atoms to find more favorable surface sites to interact with other hydrogen species.

The Devil Is in the Details

The team turned to molecular dynamics simulations based on first principles to better understand the hydrogen evolution process. The complex, computationally intensive simulations were run on the Laboratory’s Sierra and Vulcan supercomputers using a combination of open-source and Livermore-developed codes. What the team discovered was an intriguing link between atomic interface kinetics and the performance and durability of different solar catalyst materials. Ogitsu explains, “Our simulations showed a strong correlation between how mobile the adsorbed hydrogen atom is on a given surface and the efficiency of the system. The importance of mobility suggests that the initial adsorption of hydrogen atoms and the subsequent evolution and release of hydrogen gas molecules occur at physically separated locations. The diffusion between these locations plays a key role in reaction efficiency.”

In the simulations, a hydrogen ion extracted from solution does not always simply stick to a single site on the electron-donating semiconductor surface, as is often thought to be the case. Rather, the ion can move freely, or hop, between available sites because of a permanent, thin layer of surface oxygen and hydroxyl, which forms a network of bonds that connects neighboring surface sites. Furthermore, the adsorbed hydrogen hops more easily depending on the material. According to the simulation results, the hydrogen is far more mobile on InP than on GaP. Ogitsu says, “This result was unexpected, given that the two materials are similar in their electronic and structural properties.”

The reason for the difference lies in the nature of the bonds formed between the adsorbed hydrogen and the molecules and atoms on the surfaces of the two materials. Wood explains, “According to the results of the simulations, hydrogen binds more tightly and rigidly to gallium-phosphide than to indium-phosphide. You could think of gallium-phosphide as having a ‘stickier’ surface, such as fly-paper.” On GaP, the hydrogen makes short hops but is more circumscribed. On the other hand, an adsorbed hydrogen on InP appears to move much greater distances in the same amount of time, and is not confined to one region of the surface. “It’s similar to taking a local bus versus an express one,” says Wood. “Although you board and disembark at the same locations, the express travels much faster and makes fewer stops in between. Similarly, at the atomic level, InP molecules form looser bonds with hydrogen, facilitating their movement and allowing them to react more readily. As a result, the hydrogen has increased opportunities to find those surface regions that are particularly conducive to reactions with other hydrogen atoms to form H2, thus increasing the efficiency of the system.”

In another interesting result, the simulations indicate that the rate at which hydrogen diffuses also depends on the ease with which the adsorbed hydrogen moves into and through the aqueous solution a few atomic layers above the semiconductor’s surface. The stiffer, structured bonds at the GaP surface appear to make the water solution close to the surface more icelike and rigid. However, hydrogen mobility relies on molecular exchanges that occur faster and more frequently in the liquid–water system. As a result, the looser, lower-energy bonds between the hydrogen and InP allow the hydrogen atoms to make use of the much faster solvent rearrangements within the near-surface water layer. “In our mass-transportation analogy,” says Wood, “the hydrogen ions on the gallium-phosphide bus are constrained to the slow city streets of the surface, whereas those on the indium-phosphide bus can also choose to zip along on the faster, near-surface interstate freeway.”

Furthermore, the modeling results suggest that the differences in hydrogen mobility on various materials may also affect a material’s susceptibility to corrosion. “Why some materials corrode more readily than others, even when they have similar properties, is still a mystery,” says Wood. Some studies indicate that corrosion may occur more easily on surface areas that build up an unwanted local abundance of charge, which suggests a surface that facilitates hydrogen movement would have a natural mechanism for redistributing or neutralizing the accumulated charge, making corrosion less likely. “Our results tend to support the theory that materials with higher hydrogen mobility may be able to ‘heal’ themselves,” says Wood. 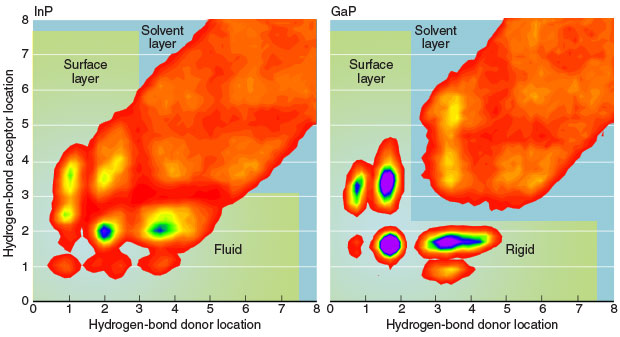 Simulations indicate the density of hydrogen bonds formed at the interface between (left) water and InP, and (right) water and GaP, based on the distances of the bond-donor and bond-acceptor species from the material surface. Purple is the region of highest density. Blue and green outline the surface-adsorbing layer and the first layer of solution, respectively. The hydrogen bonds are less structured and exhibit more topological variety for the InP–water interface, which consequently is more fluid and dynamic than the GaP–water interface.

Experimental data serve as a so-called reality check for researchers, who use the data to help validate their theories. The collaboration of Livermore, UNLV, and NREL allows theorists and experimentalists to work together to overcome the challenges associated with hydrogen evolution and accelerate research and development. NREL leads the synthesis effort on improving the durability of carefully tailored compound semiconductors based on input from the other team members. UNLV heads experimental characterization of the NREL-provided samples, generating high-fidelity x-ray spectroscopic data from its in situ characterization of different water–electrode interfaces. The semiconductor samples are analyzed at Lawrence Berkeley National Laboratory’s Advanced Light Source using x-ray synchrotron spectroscopy, which offers information about the local surface and interface structure. The spectroscopic data is directly compared to simulated spectra based on model surfaces and interfaces provided by the Livermore team, assisted by Lawrence Berkeley scientist David Prendergast as part of a Molecular Foundry project. Through this feedback cycle, the key underlying mechanisms of durability improvement are explored and identified.

Ogitsu, Wood, and Choi’s efforts were rewarded last year when their team was named a recipient of DOE’s 2014 Hydrogen Production R&D Award, presented by EERE’s Fuel Cell Technologies Office (FCTO) in recognition of FCTO-funded R&D in hydrogen production. Their groundbreaking work, which integrates advanced tools and methods in materials theory, synthesis, and characterization, is important for many areas of research, including chemical sensor development, energy storage, and energy conversion. The achievements also exemplify core tenets of the White House’s Materials Genome Initiative.

Few interactions are as fundamental as water interacting with a surface, and now researchers have a virtual window into observing these interactions at the very smallest scales. If the results on hydrogen evolution thus far are any indication, atomic-scale observations of such complex processes are bound to yield some compelling and far-reaching insights, proving the old saying that it’s sometimes the little things that matter most.