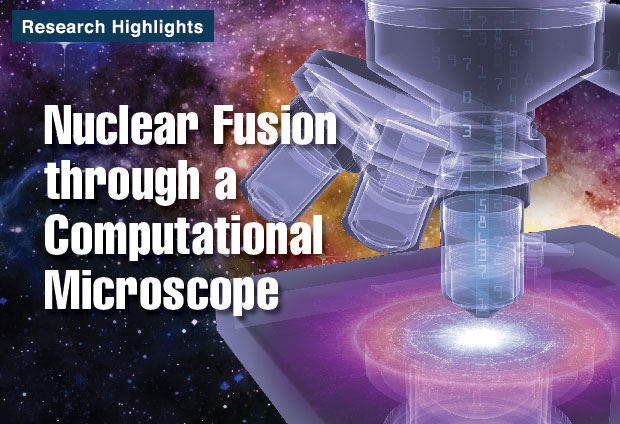 The life of a star, from birth to death, is fueled by nucleosynthesis. At the heart of this process, nucleons—protons and neutrons—come together to form the atomic nuclei of virtually all the chemical elements in the universe. Nuclear fusion is a type of nucleosynthesis in which the nuclei of lightweight elements, such as hydrogen and helium, crash into each other and fuse, releasing large amounts of energy and creating the nuclei of heavier elements, for example, carbon and oxygen. These nuclear reactions are of great interest to astrophysicists who seek to answer the most fundamental questions about the origins of the universe and the evolution of stars.

Nuclear fusion reactions are very difficult to measure at the low energies relevant to stellar temperatures, primarily because the probability of two positively charged nuclei fusing together drops steeply with decreasing energy. Typically, scientists perform experiments at the lowest energy at which fusion reactions can be observed—from thousands down to hundreds of kiloelectronvolts—and then make theoretical extrapolations to lower energies of interest. However, the resulting estimated low-energy data may be unreliable because nucleon dynamics are disregarded in those calculations.

Livermore physicist Sofia Quaglioni is leading an effort to achieve a fundamental description of nuclear fusion using an ab initio (from the beginning) approach. “We are computing the properties of a system of nucleons viewed as pointlike particles that interact with each other,” says Quaglioni, who earned a 2011 Early Career Research Award from the Department of Energy (DOE) for her work. “We consider the force between nucleons and the laws of quantum mechanics to describe these microscopic systems.” The scientific team, which includes Livermore postdoctoral researcher Guillaume Hupin and collaborators from TRIUMF in Canada and the Technische Universität Darmstadt in Germany, is developing a comprehensive framework using first-principles calculations and high-performance computing to describe dynamic processes between nuclei.

Many-body problems, such as the one studied by Quaglioni, are some of the most computationally intensive in science. To date, Quaglioni and her team have used more than 25 million core-hours on DOE supercomputers, with up to 100,000 cores per run. Those efforts have produced notable results, including pioneering work on nucleon–nucleus collisions and interactions of three nuclear fragments. The Laboratory’s 2014 Computing Grand Challenge Program has allocated the team an additional 2.5 million core-hours over the next year to further improve understanding of these complex physical phenomena.

To study nuclear systems at a fundamental level requires an in-depth understanding of a system’s wave function, which is determined by solving the Schrödinger equation. The wave function describes the quantum state and behavior of the nucleons inside the nucleus. Protons and neutrons have a wavelike nature and thus have locations that can only be described by a probability distribution. The square modulus of the wave function—its absolute value squared—provides the probability density of finding the nucleons at a given position and time.

“When I joined the Laboratory as a postdoc in 2006, Livermore was at the forefront of developing methods to describe the wave function of nucleons bound inside a nucleus,” says Quaglioni. “Since then, we have been working on the much more difficult problem of describing how nucleons behave in a system of two nuclei—a projectile and a target—with one colliding into the other.” In their model, the wave function is built as a linear combination of basis functions. A linear combination is the summation of a number of quantities, or terms. For a complex entity, such as a nucleus, the number of basis functions needed to describe all the possible states of component nucleons is very large. Correspondingly, the wave function describing the interaction of a projectile and a target, which requires multiplying the component linear combinations together, results in an expression with an enormous number of terms.

“Our model can often contain billions of terms,” says Quaglioni. “While more terms improve the accuracy of the model, they also make solving the Schrödinger equation more difficult.” Computational “superpower” is needed to antisymmetrize the basis functions so that two different nucleons do not occupy the same quantum states, which would violate the Pauli exclusion principle. Livermore’s high-performance supercomputers have opened the door for computationally intensive research such as Quaglioni’s. “Until just four years ago, an ab initio treatment of nuclear fusion was impossible,” she says. “With these powerful tools, we have begun to describe from first principles complex reactions such as the fusion of deuterium with tritium nuclei to produce helium-4 and a highly energetic neutron. We are now focused on taking this work to the next level.”

An effort led by Livermore physicist Sofia Quaglioni used a first-principles approach to describe complex reactions such as the one depicted here. In this reaction, one of the protons in a deuterium (hydrogen-2) projectile is transferred to a tritium (hydrogen-3) target, leading to the formation of helium-4 and a highly energetic neutron.

A Recipe for Theory

Fundamental interactions among nuclei are tied to the theory of quantum chromodynamics (QCD). QCD describes the “strong force” that holds quarks together to create composite particles known as hadrons, which include protons and neutrons. “Because quarks within nucleons are confined at energies relevant for nuclear physics, the nucleons themselves provide the correct degrees of freedom for the problem we want to solve,” says Quaglioni, who likens her approach to creating a recipe. “To achieve the fundamental results we are looking for, we must have the right ingredients. Applying our knowledge of how the forces that bind nucleons together emerge from QCD is a key ingredient.”

In this computational framework, the team incorporated nucleon–nucleon and three-nucleon forces, grounded in the underlying theory of QCD, via chiral effective field theory. The latter theory represents the interactions of hadrons in terms of field quantities varying in time and space. According to Quaglioni, part of what makes the nuclear many-body problem especially difficult is that the forces among nucleons have not yet been fully determined. These forces are much more complex than those of other microscopic systems such as atoms or molecules. Nucleons exert a strong attractive force between one another when they are a couple of femtometers (10–15 meters) apart, but they fiercely repel each other at even shorter distances. “Describing wave functions at these distances is challenging, because the calculations become harder to solve and require more basis states,” says Quaglioni. “Part of what makes this force especially complicated is that nucleons interact in triplets as well as in pairs.”

In the team’s first attempt at achieving an ab initio description of nuclear fusion, the researchers simplified the problem by omitting the three-nucleon force. The goal of Hupin’s postdoctoral research is to close the knowledge gap in this area by studying the effect of the three-nucleon force in low-energy nuclear reactions. Including the three-nucleon force—6 billion matrix elements that must be read and stored in memory—increases the computational burden dramatically. Another goal of Quaglioni’s team is to describe systems of three nuclei in relative motion. “Using the Laboratory’s supercomputers, we have radically improved our ability to describe collisions of two nuclei from first principles,” says Quaglioni. “With our most recent Grand Challenge allocation, we want to describe from first principles those systems that decay and emit three nuclei as well as reactions in which the target breaks apart, resulting in three nuclear fragments.”

To simulate dynamic interactions among nuclei, the team is combining the ab initio no-core shell model (NCSM) with the resonating group method (RGM). NCSM describes the internal structure of nuclei, called clusters, while RGM is a microscopic technique for describing the quantum mechanical interactions between the nuclei as well as clustering effects. With the extended NCSM–RGM, the team has accurately simulated the elastic scattering of neutrons, protons, and deuterium nuclei of helium-4 using nucleon–nucleon plus three-nucleon forces from chiral effective field theory. They have also described three-body cluster configurations of helium-6, in which a helium-4 nucleus interacts with two “halo” neutrons that orbit the nucleus at a distance. “Two-nucleon halo nuclei have fascinated nuclear physicists for more than 25 years,” says Quaglioni. “They are unstable nuclei. If we remove one of the three components—a nuclear core and two nucleons—the whole system falls apart. Because their constituents do not bind in pairs, we can better describe halo nuclei when their configuration is explicitly represented in the mathematics.” This work represents the first-ever description of three-cluster dynamics within an ab initio framework. “The extension of NCSM–RGM to the treatment of three-body clusters will allow us to study not only halo nuclei but also reactions that end with three nuclear fragments,” adds Quaglioni.

The team is leading an investigation into the unbound resonances of the helium-6 nucleus, which has already returned exciting results. “Our theory describes the first three positive-parity states of helium-6 in agreement with experiments, and it predicts the existence of new resonances that have not yet been measured,” says Quaglioni. “We are thrilled that our ambitious idea for simulating complex, three-body systems works so well.” 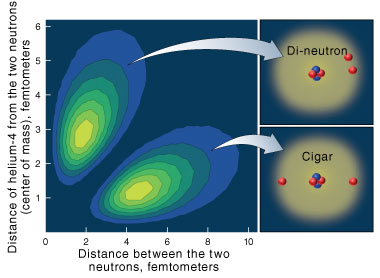 Quaglioni and her team are one of the foremost groups combining first-principles approaches with high-performance computing to describe nuclear properties and improve nuclear theory. She says, “Today, accurate nucleon–nucleon and three-nucleon interactions from the chiral effective field theory offer a much desired link to QCD at low energies, helping us discover the true nature of the forces among nucleons and their role in star formation and evolution.”

By enhancing the predictive capability of stellar modeling, this work is foundational to many Laboratory missions and supports fusion research at facilities such as the National Ignition Facility. A greater knowledge of the fundamental processes that fuel our stars enhances astrophysics research and may help reveal the secrets of elusive and enigmatic processes that have shaped and continue to form our universe.