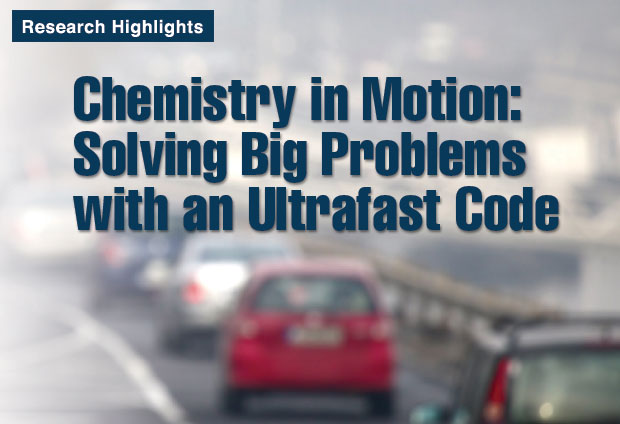 According to the United Nations Environment Programme, failure to control soot emissions leads to an estimated 2 million premature deaths per year worldwide. In the U.S. and the European Union, 70 percent of soot emissions are from diesel engines. Developing efficient, environmentally friendly low-temperature combustion engines would reduce these and similar pollutants.

As the world draws down the fossil fuel supply, “do more with less” has become a mantra in many fields, including energy and transportation. Meeting this challenge requires innovative approaches to solving some very big problems that occur on very small timescales. One important focus area is the design of efficient, environmentally friendly engines for transportation. Rather than relying on high-temperature combustion control methods, such as gasoline spark plugs and diesel injection, researchers designing next-generation engines are seeking to control the ignition process through alternate means that will enable much lower combustion temperatures.

In laboratory experiments, engines operating in low-temperature combustion modes have proven to provide high-efficiency power with low emissions of soot and nitrogen oxides. To better understand and develop these advanced concepts, engineers and designers must turn to computer codes that can resolve thousands of intermediate chemical species. Such codes exist but are, for the most part, very slow. They can require nearly a day to resolve a few seconds of reactions in a simplified simulation of gasoline combustion, thus limiting their usefulness in the engine-design process.

Livermore engineer Matthew McNenly has devised a solution to this conundrum: an innovative computational method that speeds up modeling the behavior of chemical systems by a factor of 1,000 over those methods traditionally used for internal combustion engine research. For those designing next-generation engines based on conventional transportation fuels and newer biofuels, his work will provide insight into the chemistry of fuel reactions, producing results in days instead of years.

When simulating complex systems in which many chemical reactions occur simultaneously, such as in combustion engines and nuclear reactors, the range of timescales proves to be a significant challenge. “We need to examine a host of reactions, from those faster than a femtosecond to those slower than a millisecond,” explains McNenly.

At the femtosecond (10–15-second) scale, the key combustion reactions occur when a single molecule rearranges itself (isomerization) or falls apart into two or more products (decomposition). The speed at which these unimolecular reactions evolve is generally dependent on temperature, pressure, and mixture composition. “Resolving the competition between these ultrafast unimolecular pathways is crucial to designing low-temperature combustion engines,” says McNenly.

Reactions that are slower but just as critical occur between the nanosecond (10–9-second) and microsecond (10–6-second) scales. “In this time range, fluid dynamics is a relevant process,” explains McNenly. Accurately simulating how chemical and fluid dynamic processes influence each other is a new area of research for McNenly and colleagues.

At the millisecond (10–3-second) scale, the chemical pathways of interest are affected by the piston motion of the engine. Some important nitric oxide and soot formation pathways occur over milliseconds.

Another computational challenge is studying the interaction of the hundreds or thousands of chemical components contained in conventional hydrocarbon fuels (gasoline, diesel, or jet). The oxidation of each component may, in turn, involve thousands of intermediate species interacting through tens of thousands of reaction pathways. The traditional method for solving these large, complex systems involves commercial software codes that depend on “dense matrix solvers” for the heavy-duty computing. “These matrices are used to solve a problem in many dimensions, with the goal of determining what the new composition is at the completion of each time step,” says McNenly.

Even high-performance supercomputer systems, such as those at Livermore, take a long time to “step through” the solutions for large, detailed reaction networks using these traditional methods. For some of the reaction networks developed at Livermore, a calculation can take an entire day. Researchers have long sought methods to reduce the time to perform such calculations. Typically, the focus has been on reducing the network size by tracking fewer chemical species or by shrinking the number of reactions under consideration. However, accuracy is difficult to maintain with these approaches unless users have considerable expertise.

About five years ago, while running a simulation of an engine model in support of the Laboratory’s combustion research effort, McNenly had an “aha” moment. As expected, the simulation was taking a very long time, even with the power of Livermore’s supercomputers. McNenly thought there must be a better way and began exploring concepts he had learned in a mathematics course as a graduate student. “The professor had taught us some interesting ways to solve certain kinds of linear problems,” he says. “Basically, rather than trying to solve the problem directly in its exact form, we took an iterative approach. The convergence to the exact solution is accelerated at each step by applying a preconditioner, which is a simplified form of the original problem and easier to solve.”

With support from the Department of Energy’s (DOE’s) Office of Energy Efficiency and Renewable Energy, Vehicle Technologies Program, McNenly pursued this intriguing concept for solving large, complex chemical reaction networks. McNenly notes that his involvement in the DOE Computational Science Graduate Fellowship Program also helped make this work possible. “The fellowship program focuses on training graduate students in how to use DOE supercomputer systems for scientific research,” he says. “I was exposed to a broad range of numerical methods and algorithms, which made it possible for me to pursue this line of reasoning.”

McNenly’s method involves using matrix preconditioners to form highly efficient, sparse approximations to the reaction network. These preconditioners adapt “on the fly” to represent the most important reaction pathways at specific locations in the engine and at specific times during the combustion process. “Generally speaking,” says McNenly, “this approach identifies which reaction pathways are not important at a particular time and uses the preconditioner matrix to filter them out. For example, if the original fuel has reacted to form shorter intermediate species, the chemical pathways containing the original fuel composition are no longer needed and can be ignored. Our working hypothesis is that only a small number of reactions are needed to calculate from time A to time B. The critical reactions might change for time B to time C, but at that point, some reactions can be dropped and others added.”

The important pathways are then mathematically represented in the sparse, preconditioner matrices. Because fewer pathways are represented, the simulation of reaction networks is accelerated tremendously. With McNenly’s method, a simulation that took an entire day to run with traditional methods now takes less than 30 seconds. Even when compared to sophisticated commercial chemistry packages built on sparse solvers, McNenly’s approach shows a fifteenfold improvement in time to complete a simulation. Most importantly, McNenly’s method accomplishes these simulations without a loss of accuracy. 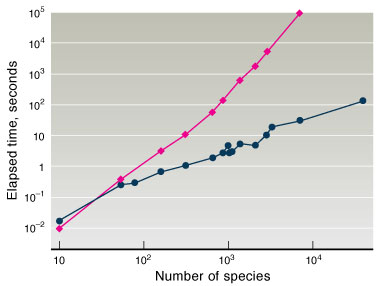 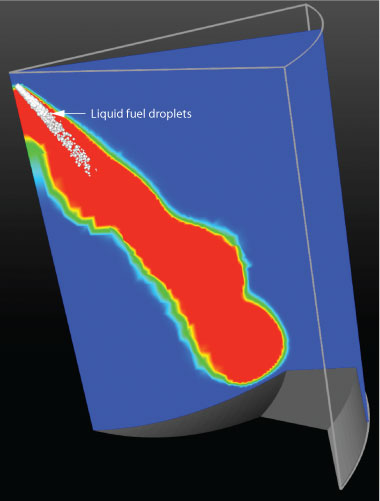 This engine design simulation shows the relative concentration (where red is the highest and blue the lowest) of iso-octane fuel after an initial injection event in a 45-degree slice of a Cummins B5.9 cylinder (each slice captures a single hole of an eight-hole fuel injector). The fuel is simulated using an 874-species mechanism, developed by Livermore’s Bill Pitz and others, with a flow resolution of 200,000 fluid dynamic cells. With the new preconditioner, this very detailed mechanism can be used to simulate one engine design iteration in less than a day on 24 processors.

McNenly’s method is perfectly suited to speed up some fuel combustion simulations developed by researcher Bill Pitz, one of McNenly’s colleagues at Livermore. Pitz and his collaborators have developed advanced hydrocarbon chemistry mechanisms that resolve the tens of thousands of critical reaction steps occurring during the combustion of transportation fuels. This level of detail is necessary to predict ignition and emission qualities in engine simulations. However, the mechanisms are too large to be used in a typical design simulation in industry, where supercomputing power and fast run times are not as readily available. “Our goal is to package these algorithms so those in private industry can easily use them to simulate advanced high-efficiency, low-emission engines during design cycles,” says McNenly.

Thanks to the efforts of Livermore’s Russell Whitesides and Dan Flowers (funded under a partner project), the solver has been implemented and licensed to one commercial software vendor. Other interested commercial entities include manufacturers of automobile and jet engines. Beyond these immediate applications, McNenly sees promise for any field in which interaction networks are paramount, including nuclear energy, biological systems, plasma dynamics, and astrophysics. He concludes, “We believe this approach can be helpful to anyone who is looking at what happens when two things collide, when the possibility of that collision is driven by concentrations.”