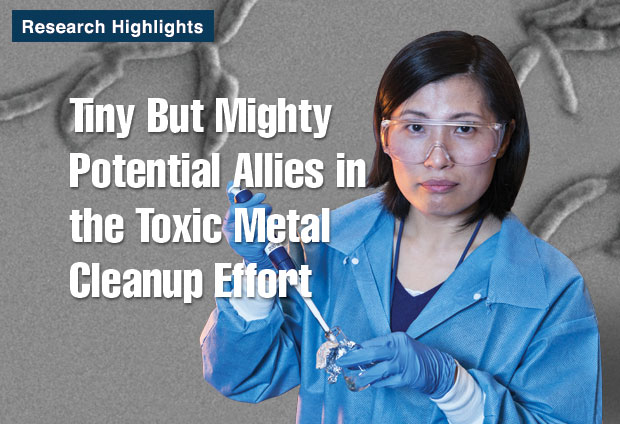 Microbiologist Yongqin Jiao is studying how some aerobic bacteria survive and even thrive in uranium-contaminated aquatic environments. (Photograph by George A. Kitrinos.)

The Department of Energy (DOE) is tasked with cleaning up roughly 120 sites in the U.S. and its territories that are contaminated with depleted uranium and other toxic heavy metals as a result of energy and weapons production activities. Without treatment, these metals will persist and accumulate in the food chain. High cost and concerns about long-term effectiveness hamper the widespread application of current chemical and physical remediation methods. Bioremediation—using naturally occurring or genetically modified organisms to detoxify hazardous substances—potentially offers an efficient, inexpensive, and environmentally friendly alternative. While even trace amounts of uranium pose a threat to human and animal health, some bacteria tolerate environments with surprisingly high uranium concentrations. Scientists are working to understand the natural coping mechanisms of these microorganisms so they can be exploited at contaminated sites.

Livermore microbiologist Yongqin Jiao is midway through a five-year study, funded by DOE’s Early Career Research Program, to investigate how certain aerobic bacteria interact with uranium in aquatic environments. She is focusing on the metabolic processes of the common bacterium Caulobacter crescentus, which tolerates low-nutrient environments, including uranium-contaminated groundwater. Because other research groups have extensively studied the genome and life cycle of C. crescentus, the bacterium serves as an ideal model system. In a series of experiments, Jiao and her colleagues found that C. crescentus reduces the toxicity and mobility of the uranium in the bacterium’s environment. Jiao’s work to illuminate the survival strategy of C. crescentus supports DOE efforts to better understand the natural processes occurring at contaminated sites and ultimately to improve uranium remediation approaches.

When C. crescentus is added to a test tube containing growth media, the bacterium normally begins multiplying immediately. However, when the Livermore team added C. crescentus to a growth medium that also included uranium, the bacterium experienced an initial period without population growth. The duration of the no-growth period was proportional to the concentration of uranium. Once C. crescentus began growing, it grew at the same rate and to the same final population density as cells not exposed to uranium. The researchers examined the cells during the no-growth phase using scanning electron microscopy (SEM) and found that the cells’ development appeared to stall.

Understanding what occurred during this period seemed essential to explaining the bacterium’s uranium tolerance. To investigate whether the reaction of C. crescentus to uranium was unique, the researchers exposed the bacterium to eight other heavy metals. Zinc was the only other metal that produced the characteristic pattern of growth arrest, followed by normal growth and yield. The team also introduced uranium into cultures of three common soil- and gut-dwelling microbes—including one known for its heavy metal resistance—to compare their responses. The researchers were surprised to find that C. crescentus had by far the shortest growth arrest period. Notes Jiao, “The other species experience a lengthier growth arrest because they are not as resistant to uranium toxicity. However, those species are likely interacting with the uranium through similar mechanisms, so what we learn about C. crescentus may be applicable to other aerobic bacteria.”

The team then explored whether the bacterium was somehow altering its environment during this phase. Researchers removed the growth media from C. crescentus cultures at different points in the growth-arrest phase and placed the media in new cultures of C. crescentus. They found that growth arrest is reduced when the growth media is reused. Arrest periods are shortest in cultures with media collected from late in the no-growth period. In collaboration with biologist Lucy Shapiro at Stanford University, the researchers also monitored expression of a C. crescentus gene region previously shown to specifically sense uranium. The team noted that the uranium sensor was highly expressed when the bacterium first encountered the uranium, but that expression plateaued and then declined by the end of the growth-arrest phase. Together, these results strongly suggest C. crescentus is detoxifying the uranium throughout the course of the growth-arrest period.

To better understand how detoxification occurs, the biologists collected media from C. crescentus cultures grown in the presence and absence of uranium at various growth stages and added those samples to new cultures with fresh growth media and uranium. Growth media gathered during or after the growth-arrest period shortened the new culture’s growth arrest and reduced expression of its uranium sensor gene—even for media taken from cultures that had never been exposed to uranium. The researchers concluded that C. crescentus produces a substance as part of some basic metabolic activity that helps to detoxify uranium. “The bacterium simply makes and secretes this metabolite throughout its life cycle,” says postdoctoral researcher Dan Park. “Our hypothesis is that the compound accumulates during the growth-arrest period, and at some point, the medium reaches levels of toxicity below that producing growth inhibition.”

Caulobacter crescentus has a distinctive life cycle during which the bacterium undergoes asymmetric cell division into a mobile swarmer cell and a stationary stalked cell. These scanning electron microscope images show C. crescentus cells grown (a) without and (b) with uranium exposure. The cells exposed to uranium have a shorter stalk length, which suggests that uranium exposure delays the cell development and division processes. 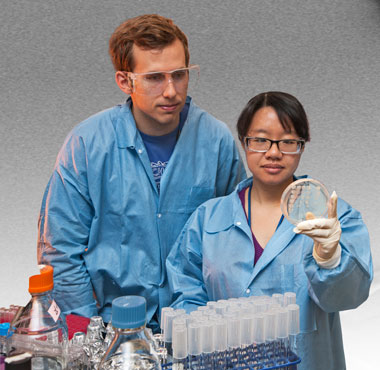 Livermore postdoctoral researchers Dan Park (left) and Mimi Yung (right) study bacteria samples that are missing a critical gene for survival in the presence of uranium. (Photograph by George A. Kitrinos.)

A Change in Expression

In addition to observing the response of C. crescentus to uranium exposure at the colony level, the Livermore scientists delved more deeply into the bacterium itself, to pinpoint proteins and genes that may play a role in uranium resistance and detoxification. In 2005, Stanford University researchers performed a series of experiments on C. crescentus to determine how RNA expression changed in response to exposure to three heavy metals—uranium, cadmium, and chromium. Jiao’s team, in conjunction with University of California at Davis researcher Brett Phinney, has since completed a complementary profiling study, looking at protein rather than RNA regulation.

Expression profiling measures the relative amounts of thousands of genes or proteins encoded by the genome at the same time. Protein expression levels of uranium-exposed cells collected during the growth phase were then compared with the levels of cells not exposed to uranium to distinguish uranium-specific expression.

While protein and RNA expression results matched in most respects, the protein study did reveal several insights. The team found that C. crescentus increased its expression of the protein phytase fivefold when uranium was present. Phytase helps C. crescentus metabolize phytate, an abundant form of organic phosphorus found in the natural environment. In addition, two regulator proteins associated with the cell-division processes exhibited lower abundance when C. crescentus was exposed to uranium. These results are consistent with SEM imaging observations and the researchers’ theory that cell development pauses as a result of uranium stress. “This study shows that the environment is affecting protein expression,” says Jiao. “Even though the bacterium eventually reproduces at the same rate as it does without uranium, the proteins are being disturbed.”

Jiao’s team has been collaborating with DOE’s Joint Genome Institute on a DNA study to ascertain which C. crescentus genes are important for uranium resistance. Using a comprehensive mutagenesis technique, the researchers engineered a large set of mutant C. crescentus cells. Each bacterium had a different single gene disrupted. Collectively, the approximately 4,000 genes of C. crescentus, except for a few hundred essential housekeeping genes, were individually rendered nonfunctional many times in the mutant pool. After exposing the mutants to uranium, they tallied the mutant survival rates using a comprehensive sequencing method. Those that did not survive likely had a gene disrupted that conveyed a survival advantage in the presence of uranium. The team is currently evaluating about two dozen gene candidates identified through the study, all of which, interestingly, are different than those found in the Stanford RNA study. 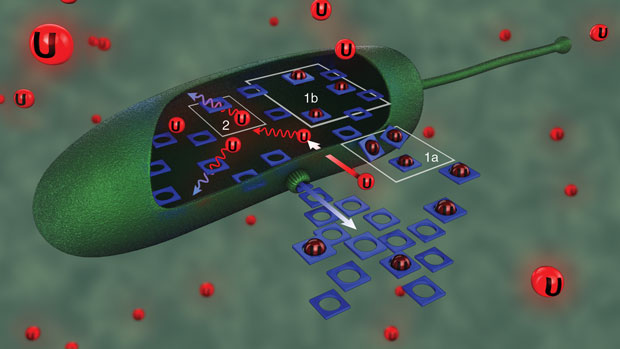 Livermore researchers propose two scenarios to explain how metabolite secretion from C. crescentus protects cells from uranium toxicity. In the first scenario, the metabolite (blue squares) interacts with uranium (red circles) directly and either (1a) excludes uranium from the cell or (1b) sequesters it within the cell, thus preventing exposure to uranium toxicity. In the second scenario, (2) the metabolite mitigates the cell’s uranium-induced stress response without physically interacting with uranium. (Rendering by Kwei‑Yu Chu.)

Because phosphorus plays a key role in the survival of other uranium-resistant microorganisms, the team explored the phosphorus-related metabolic activity of C. crescentus. The researchers exposed C. crescentus cells to uranium and examined them with x-ray diffraction and transmission electron microscopy. Imaging showed that uranyl phosphate minerals had formed on the cell surface and in the surrounding medium. The researchers surmise that an enzyme located on a cell’s exterior, called extracellular phosphatase, aids in the formation of these minerals.

Surprisingly, the researchers found that the extracellular phosphatase behavior occurs even without uranium exposure. Livermore postdoctoral researcher Mimi Yung observes, “The bacterium behaves this way naturally, and the presence of uranium neither promotes nor inhibits the activity.” Thus far, though, the researchers have been unable to link the increased phytase enzyme activity observed in the protein study to the mineral formation process.

To confirm that mineralization aided in the bacterium’s uranium tolerance and survival, the team deleted the gene responsible for extracellular phosphatase activity and uranyl phosphate formation. When the researchers exposed the modified and normal C. crescentus strains to uranium in the presence of organic phosphate, the modified bacterial cells died at a higher rate. While the phosphatase activity appears to be an innate property of the bacteria that is unaffected by uranium, the study confirmed that the cells do benefit from this activity when uranium is present. 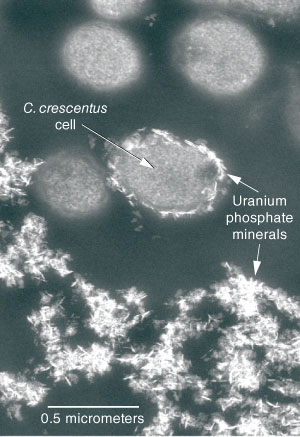 This transmission electron microscope image shows uranium phosphate minerals forming around and on the surface of C. crescentus cells, but not inside the cells (minerals appear brighter than the cells). C. crescentus produces an enzyme that aids in the formation of uranium phosphate minerals, which are less toxic and less mobile than the premineralized form of uranium.

Jiao’s team is building a convincing case for how C. crescentus metabolic activities can reduce the mobility and bioavailability of uranium. By the end of the study, Jiao, Yung, Park, and their collaborators hope to have gained an in-depth understanding of how C. crescentus interacts with uranium and changes the chemistry of its environment. The researchers expect many of the C. crescentus observations to be relevant to a broader spectrum of uranium-tolerant aerobic bacteria as well.

Research efforts by Lawrence Livermore and other institutions comprise the first, crucial step in improving uranium remediation. Once scientists understand how aerobic bacteria bioremediate uranium, they can begin to determine how to help the bacteria perform the job better, or even how to engineer better bacteria. These single-celled organisms could, in time, become formidable allies in toxic cleanup efforts.