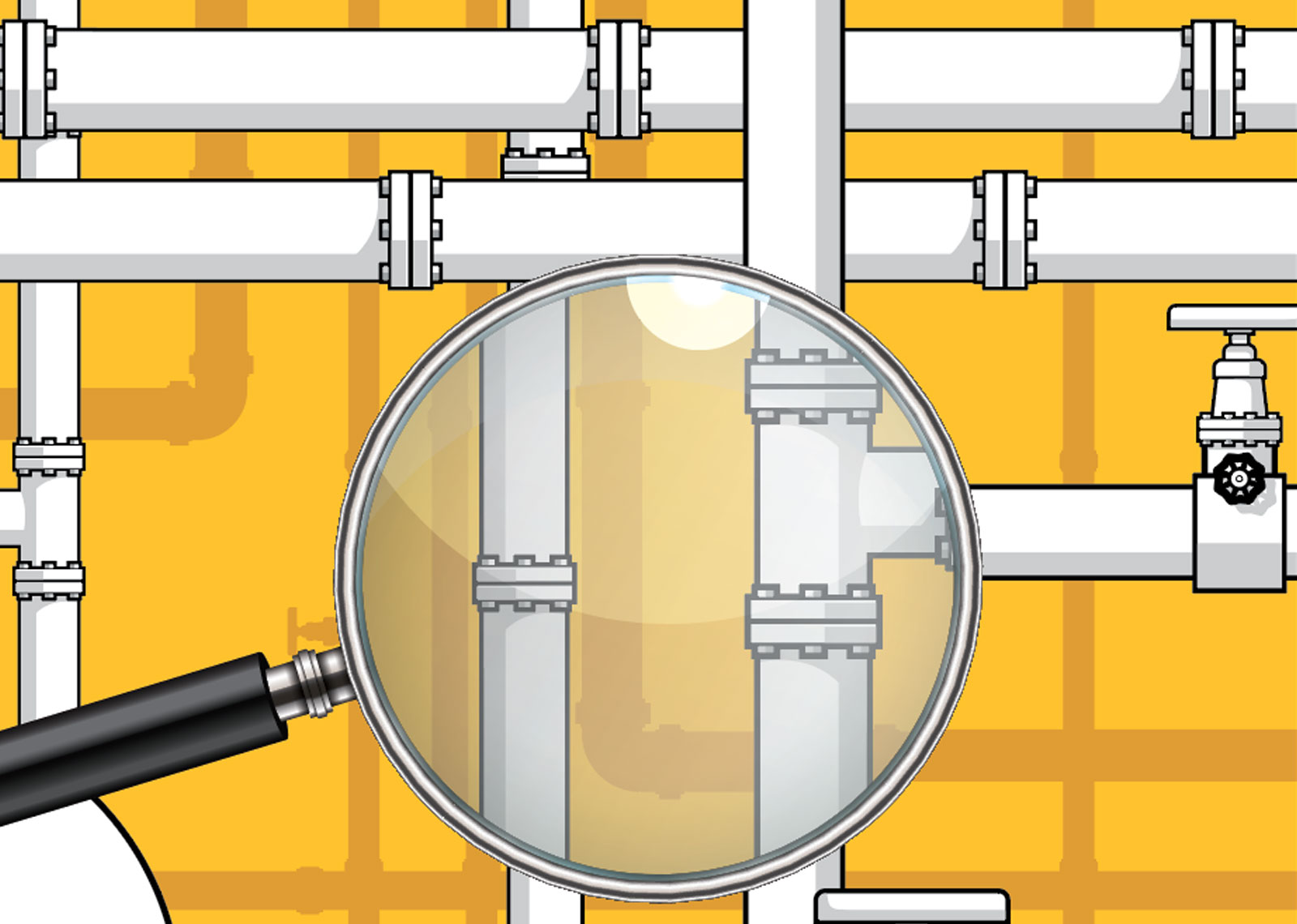 As with most mysteries, this one starts with a puzzling scene: a waterlogged field situated near Lawrence Livermore and Sandia national laboratories in Livermore, California. The property belongs to Wente Vineyards, a winery in the region, whose establishment predates the Laboratory by nearly 100 years. How the water got there and why was unclear, but the most likely suspect was a water pipeline running underneath the land—a pipeline that supplies water to both laboratories. 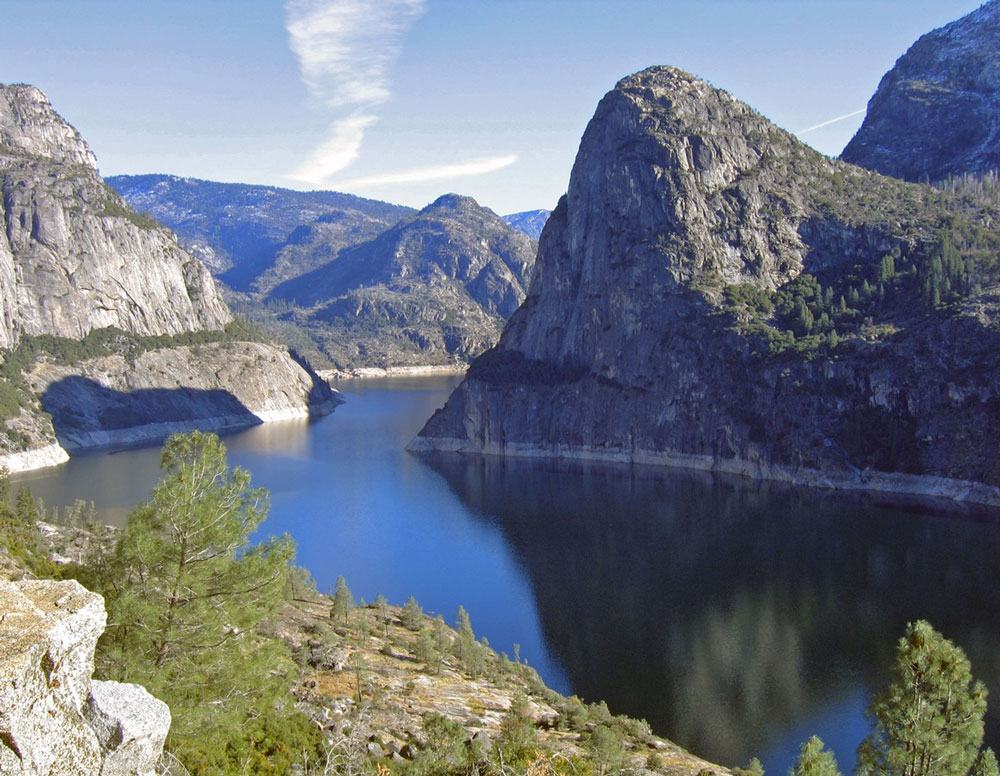 The laboratories’ pipeline taps the Hetch Hetchy Aqueduct, which supplies water to 2.6 million people in the San Francisco Bay Area and runs north several miles through the Wente property to water tanks on Sandia/California land. In February 2021, Howard Depew, leader of the Laboratory’s Mechanical Utilities Division, received a call concerning the flooded Wente field. As part of Lawrence Livermore’s Infrastructure Maintenance and Utilities Department, Depew’s division is responsible for overseeing the complex’s water, compressed air, natural gas, and sewage lines, and for fixing any leaks. Depew’s charge: investigate if the pipeline was the culprit or an innocent bystander.

A Sopping Field, No Smoking Gun

Depew’s team met with Wente officials and with their permission began digging down at several locations along the laboratories’ pipeline looking for the source of a leak. After months of fruitless digging and more than $100,000 expended, no leaks were discovered. Depew was frustrated. He was faced with the prospect of unearthing the entire pipeline to find the leak’s location, a project that would cost the Laboratory and the Department of Energy (DOE) 10 times more money. Seemingly out of options, a serendipitous connection pointed the way to a solution.

Depew’s colleague, Stephanie Bibby, group leader for Water Resources and Environmental Planning in the Environment, Safety, and Health Division, had a lead. She put Depew in contact with her husband, Richard Bibby, lead of Livermore’s Environmental Radioanalytical Monitoring Laboratory, whose group specializes in analyzing radioisotopes in environmental samples. His colleague, Erik Oerter, a scientist in the Environmental Isotope Systems Group of the Nuclear and Chemical Sciences Division, uses isotope hydrology to identify sources of water as it travels through the water cycle, from precipitation to surface water to shallow groundwater to deep aquifers, and into our food and other materials. The Bibbys thought that Oerter could determine whether water samples from the field were linked to the Hetch Hetchy system or to some other source—confirming or eliminating the laboratories’ pipeline as the perpetrator.

Early in his career, Oerter was a Colorado ski instructor and river rafting guide. He developed an appreciation for the water cycle in those jobs, and eventually obtained a doctorate in environmental science from the University of California at Berkeley. At Lawrence Livermore’s Light Stable Isotope Geochemistry and Hydrology Laboratory, Oerter measures isotopic ratios of oxygen, hydrogen, and other elements in environmental samples to gain clues as to where materials in the sample—including nuclear materials, agricultural products, and water—originated. In the case of water, oxygen and hydrogen are key elements in determining a source’s location.

Oxygen-16 (16O) contains 8 neutrons and 8 protons and is the most common stable isotope of oxygen. In fact, the oxygen in Earth’s water is 99.8 percent 16O. Oxygen-18 (18O), with 8 protons and 10 neutrons, forms only 0.2 percent of Earth’s water supply. “Oxygen-18 is heavier, so it behaves differently,” says Oerter. “Water molecules containing oxygen-16 are lighter than those with oxygen-18, so they will evaporate more readily. As a result, the vapor that evaporates from the ocean has less oxygen-18 than the liquid water from which it evaporated.” Hydrogen in water molecules can form 1H (protium), 2H (deuterium), or 3H (tritium)—containing no neutrons, one neutron, or two neutrons in its nucleus, respectively.

As rain clouds move across the North American continent from the Pacific Ocean, the rain that falls on land becomes more isotopically depleted (less 18O) as it travels east, so its 16O to 18O ratio (expressed in units of negative parts per thousand) is different than that of ocean water. Rainwater’s hydrogen isotopic ratio also shows depletion of 2H compared to 1H. The lower the ratio, the lower the quantity of the heavy isotope in the sample. Thus, water in the streams, lakes, and aquifers of different regions—from Livermore over the Sierra Nevada to the Rocky Mountains—each carry characteristic isotopic ratios. The oxygen and hydrogen isotopic ratios have been mapped in water across the United States and throughout the world, providing scientists with a way to trace the source of water should the need arise.

As water moves from the ocean to become rainwater that fills freshwater sinks on land, the isotopic ratios of oxygen-16 to oxygen-18 (δ18O) and hydrogen-1 to hydrogen-2 (δ2H) change. Each time the clouds (formed by evaporation from the ocean) travel and produce rainfall, the water becomes more depleted as it loses the heavier isotopes. The isotopic ratios are measured as negative parts per thousand, the relative depletion of the isotopes compared to a standard sample of seawater.

Earlier, Oerter and colleagues had conducted a study to better understand what water sources bioenergy crops, such as switchgrass, use to grow. Switchgrass is a potential source of carbon-neutral biofuels and a possible means to increase carbon sequestration in soil. However, commercial growers need to know how this crop, which has deep, subterranean roots that extend nearly 2 meters, could affect groundwater resources. By comparing the oxygen isotopic ratios in water extracted from under corn crops, which draw rainwater from soils close to the surface, to that of switchgrass, the researchers confirmed that switchgrass draws on the deeper, older, more isotopically depleted water underground. Oxygen isotopic ratios can also reveal the provenance of food sources, enabling agricultural officials to detect counterfeit labeling, where crops grown in regions that fetch a lower price are sometimes labeled as a more valuable crop variety from elsewhere.

Isotope hydrology also has value to the Laboratory’s national security mission. When iron rusts, it transforms chemically as hydroxide (hydrogen and oxygen) ions combine with atoms of the metal. Uranium also reacts with water to form various uranium oxide hydrates. Oerter and his colleagues have developed methods to remove the water hydrating such metals so that their isotopic ratios can be measured. This work allows researchers to identify where in the world a nuclear material may have been stored.

Oerter knew that water in Livermore is supplied by several sources. He deduced that by measuring the isotopic ratio of water in the Wente field he may be able to identify the source. He asked Depew to supply several samples from the trenches and holes in the field that were dug to find the source of the leak. He trained Lawrence Livermore utilities engineers Michael Favalora and Temple Steadman to collect samples properly. (Samples had to be clear, not muddy, with sediment allowed to settle, and they had to be sealed to prevent evaporation). Oerter measured the oxygen isotopic ratio using a cavity ring-down spectrometer, which vaporizes a sample and streams it into a chamber containing two mirrors at either end. A laser pulse shot into the chamber bounces between the mirrors. The beam decays as it is absorbed by the vapor sample, and the rate of decay provides a measure of the oxygen and hydrogen isotopic ratios.

For the Laboratory, knowing the isotopic composition of the water used in research is necessary to preserving the integrity of results. To that end, Oerter’s laboratory already had data on the isotopic composition of water at Lawrence Livermore and the surrounding local area. He had data on Hetch Hetchy water, Laboratory tap water, as well as water supplied to the city of Livermore, which comes from the San Joaquin Delta area of California. By comparing results from the field tests with the existing isotopic data, Oerter would shed light on this watery mystery.

“The samples from the Wente field had isotopic ratios that were identical to Livermore groundwater, which is similar to local rainwater,” says Oerter. “With that result, we knew that the water could not have come from the Hetch Hetchy Aqueduct, which has isotopic ratios derived from Sierra Nevada snowfall.” So, the pipeline wasn’t the problem. As any good gumshoe isotope hydrologist would do, Oerter conducted additional tests to determine whether a hypothetical “missing” water source with a sufficiently high oxygen isotopic ratio could be mixing with Hetch Hetchy water (which has a very low ratio) to deliver the same isotopic depletion observed in the Wente field water. However, no such source could be found anywhere in the region. An innocent suspect had been cleared through Oerter’s detective work. 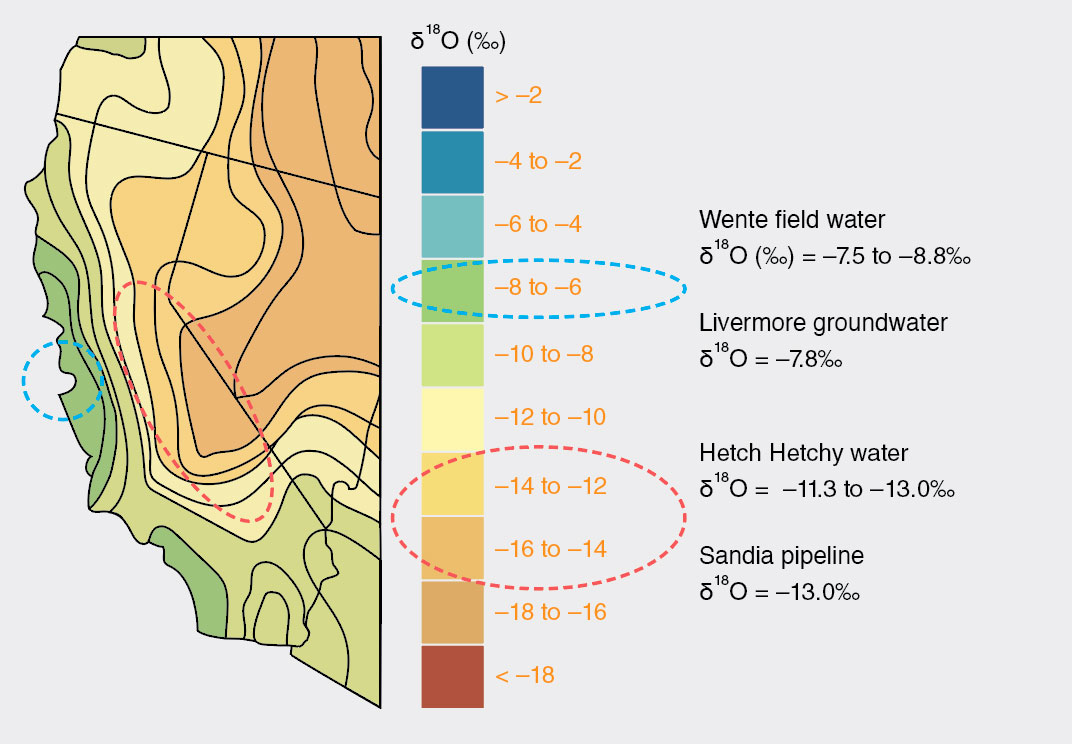 Howard Depew invited Oerter to meet with Karl Wente, the chief operating officer for Wente Vineyards, and other members of his staff, in the flooded field. Oerter gave them an explanation of his work and showed them his results. They were satisfied with his findings. Oerter later measured water samples taken from an aqueduct at the south side of the Wente field that supplied water to the city of Livermore. The isotopic ratios from this water were an identical match to those obtained from the Wente field—the true culprit was identified.

Karin King, senior technical advisor in the Livermore Field Office, which helps oversee the Laboratory for DOE, later thanked Oerter, suggesting that he may have saved DOE and U.S. taxpayers a substantial amount of money by solving this puzzle without needing to dig along the entire pipeline. Identifying the true source of the leak also allowed local authorities to fix the problem and eliminate the water loss, an important action made more necessary given the drought California faces. Although the proverb “dead men tell no tales” rings true, happily for all, water’s a high-tech stool pigeon.