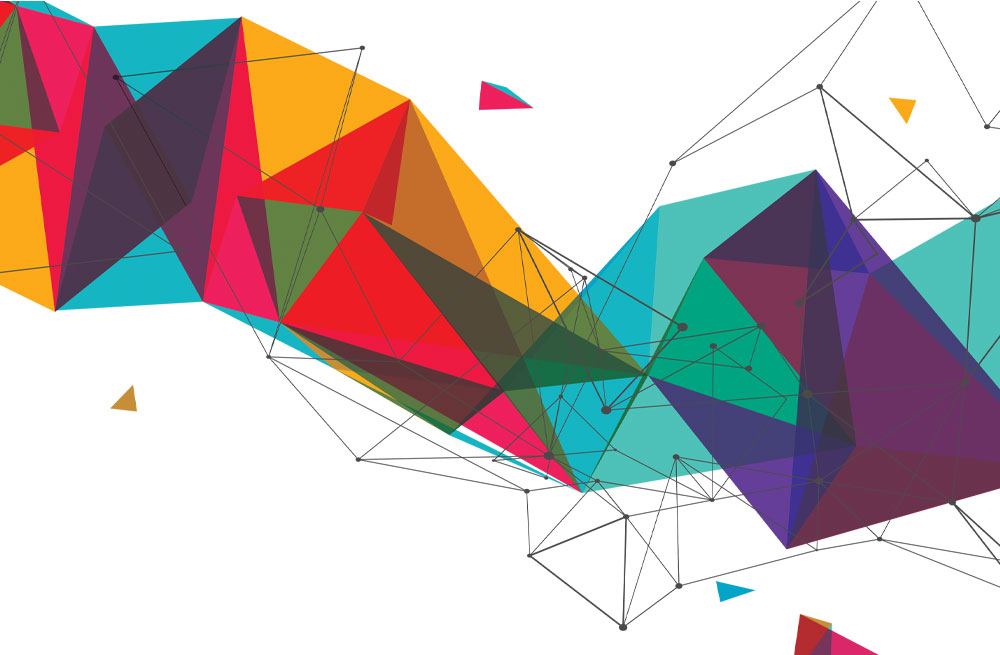 Since the Industrial Revolution, atmospheric carbon dioxide (CO2) levels have continued to rise. While oceans, plants, and soils can sequester some of this CO2 naturally, they cannot capture and remove it all, causing the excess to make its way into the atmosphere. Long-term storage solutions are needed to address the surplus—a contributor to climate change—and help the world achieve carbon neutrality. Carbon sequestration, or the capture and storage of CO2 in deep geologic formations, may offer promising solutions for preventing the release of CO2 into the atmosphere and reducing its contribution to global warming as a greenhouse gas. Once captured from stationary sources, such as power plants and other large industrial facilities, CO2 can be compressed to a dense, fluid-like state and injected deep underground into permeable, porous geologic strata for long-term isolation and storage.

In support of Lawrence Livermore’s mission to improve the nation’s energy security, the Laboratory has taken the lead on developing subsurface modeling and simulation software to support CO2 storage efforts, partnering with TotalEnergies and Stanford University in a cooperative research and development agreement (CRADA) to develop an open-source tool: GEOSX. The GEOSX software is an innovative, first-of-its-kind technical achievement, supporting industrial-scale carbon sequestration. This effort further cements Livermore’s leadership in computational geosciences—including the simulation of subsurface processes.

GEOSX and its predecessor, GEOS, were developed from the ground up with the help of experts from across the Laboratory, combining a range of disciplines including engineering, seismology, hydrology, computational geoscience, and oil- and gas-industry expertise to build a tool that can take advantage of advanced computing platforms. GEOSX lead architect Randy Settgast explains, “The code focuses on achieving performance scalability on current and next-generation high-performance computing (HPC) systems—through a portable programming model and scalable algorithms—making GEOSX ready for exascale-class systems as they come online.”

In practice, GEOSX will improve the management and security of geological repositories and support planning for the widespread implementation of CO2 storage at an industrial scale by simulating how fluids flow and rocks break deep underground. To do this, GEOSX provides 3D behavioral predictions of underground reservoirs—rock strata approximately 2 kilometers below the subsurface that either currently hold substances such as brine, oil, or gas, or have the potential to store CO2. The chosen reservoir, also referred to as the storage formation, must have a caprock, an essential top barrier that prevents buoyant CO2 from rising towards the surface once it is injected into the reservoir. GEOSX models whether the caprock can maintain the seal and if the reservoir is at risk for fracturing or leaking. 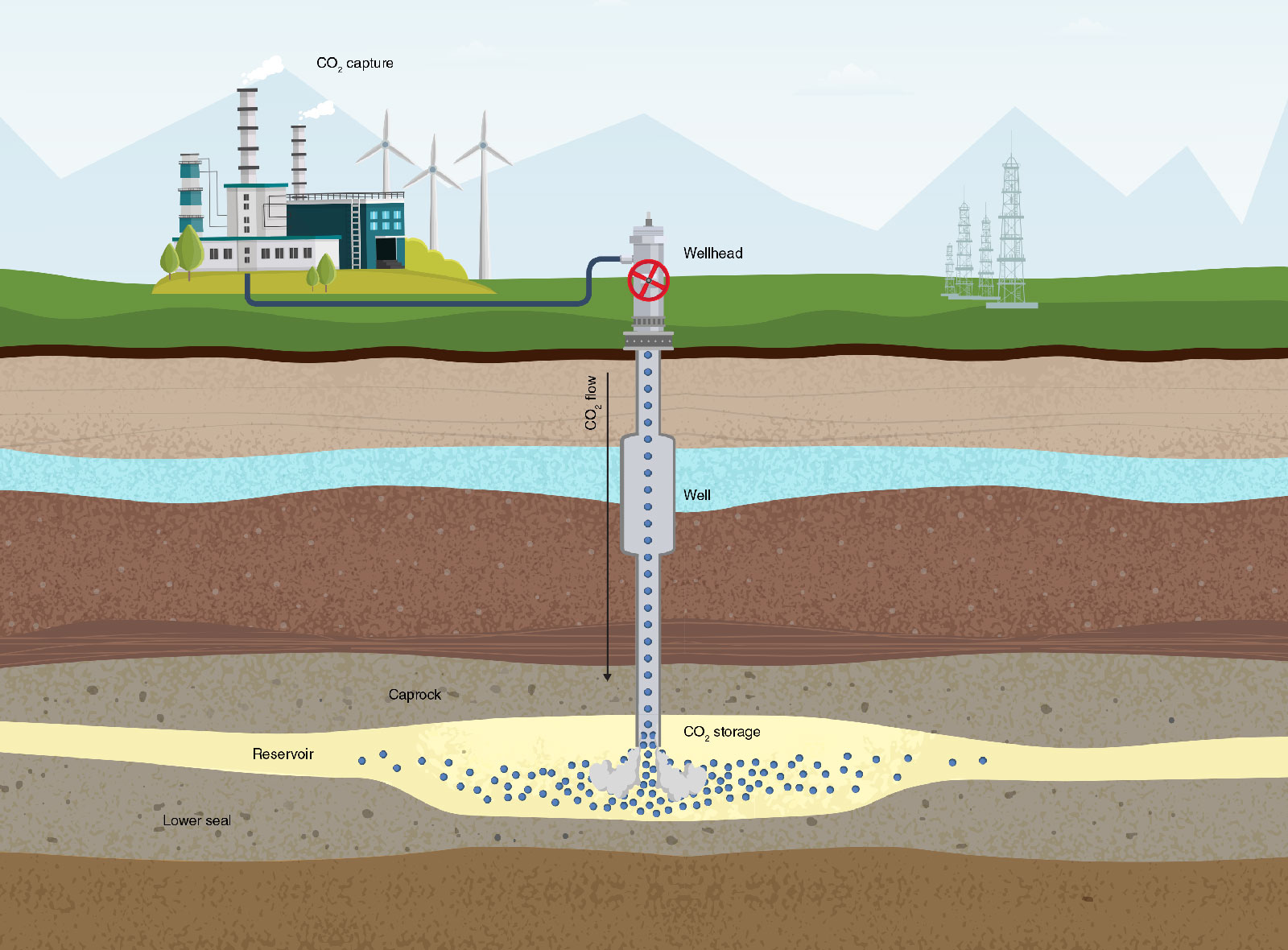 This illustration shows the process of injecting compressed liquid carbon dioxide (CO2) into a reservoir 2 kilometers underground. The wellhead regulates fluid pressure as CO2 is injected into the well. Above the reservoir is the caprock formation, which prevents the CO2 from escaping the reservoir. GEOSX simulates the migration of CO2 from its injection point and models the risk of caprock fracture or leakage, helping scientists understand how well an underground reservoir will respond to CO2 injection pressures.

To store CO2, a well is drilled down to the reservoir so fluids can be injected into the storage space. Prior to drilling, GEOSX assists scientists with creating detailed well designs, which take into account the well’s physical make up and mechanical components, in addition to the surrounding rock, fluids, and gases. When a well is drilled and formed with steel casing and cement, operators generally have limited information about potential fractures or other pathways for fluid leakage that they may create. To prevent potential leakages, GEOSX provides simulations for how a wellbore will react to pressure from CO2 fluid injection and any underground chemical reactions that could degrade well integrity. The need to understand and predict the behavior of hundreds to thousands of deep wells presents an urgent challenge, especially given the large volume of storage required for CO2 sequestration to have a meaningful impact on climate change. “Modeling the subsurface is incredibly challenging because so many disparate factors operate at different scales. GEOSX takes a unique, algorithmic approach by coupling analysis of finite elements and volumes and allowing the user to integrate multiple physics solvers with different time steps or mesh regions within a simulation,” says Settgast.

The GEOSX team has performed prospective simulations for several potential storage projects, including offshore fields in the Gulf of Mexico near Texas, and a new commercial venture underway in the North Sea off the coast of Norway. GEOSX reservoir engineer Joshua White notes, “Reservoirs in Texas and neighboring Gulf Coast states are predicted to lead the United States in terms of potential CO2 storage. Texas has an estimated capacity to store approximately 1,800 gigatons or 1.8 billion metric tons of CO2. This amount of storage, if completely filled, could hold up to 2,500 years of Texas’s CO2 emissions.” 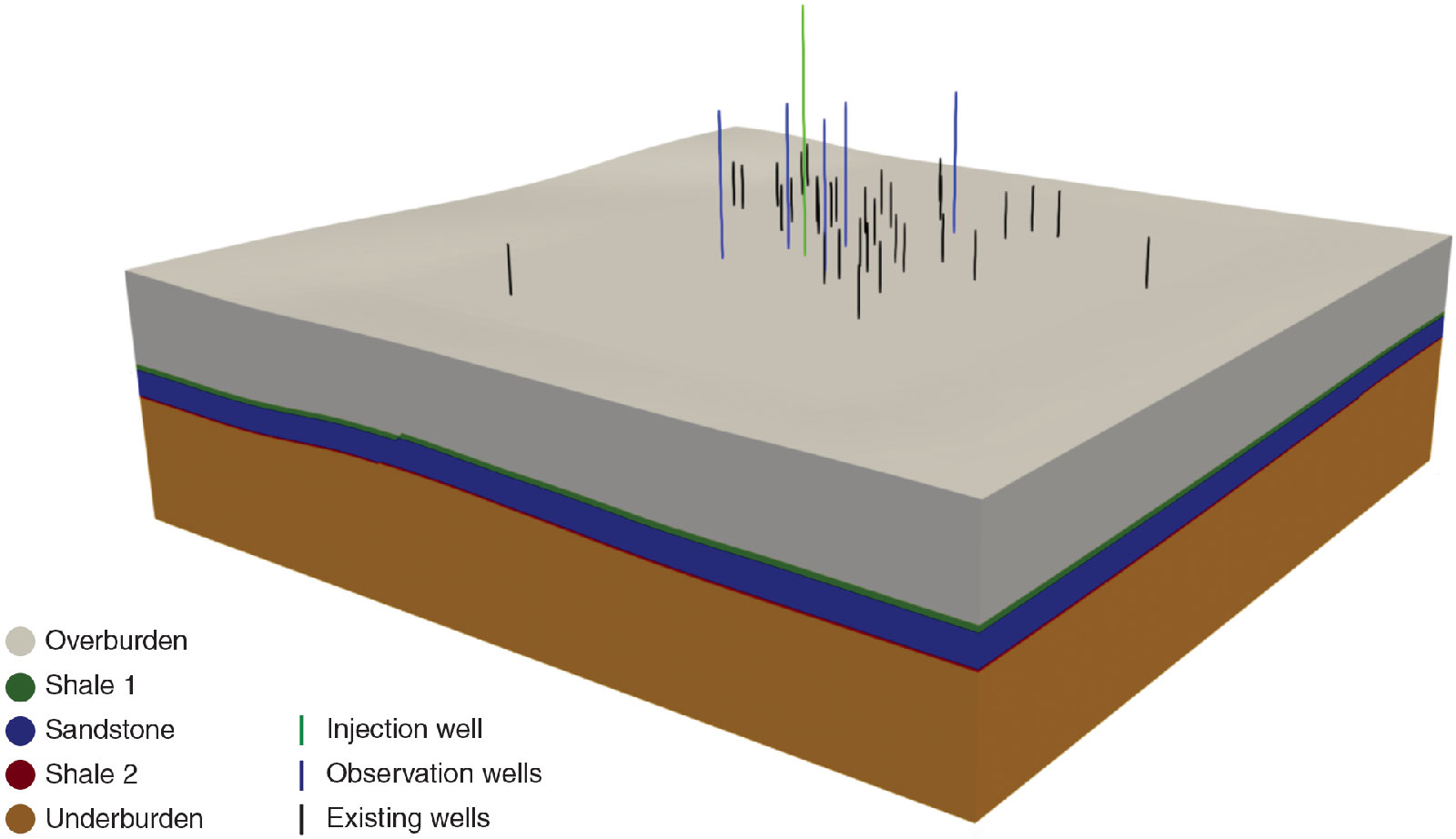 Prior to running a GEOSX simulation, geologists and geophysicists perform a site survey to create a geologic model that characterizes subsurface properties and rock layers. This model shows well locations and key geologic layers for a potential CO2 storage system in the Gulf of Mexico.

Prior to running a GEOSX simulation, geologists and geophysicists perform a site survey to characterize subsurface rock properties and layers. From this data, a computational model is built, mapping out several kilometers underground. GEOSX then uses a set of governing equations to predict how a given reservoir will react to high-pressure fluid injection. Starting from where the CO2 is initially injected near the well to where it migrates in the reservoir, GEOSX models a timescale of indefinite storage from the first few seconds to hundreds or even thousands of years into the future. The resulting simulation evaluates factors ranging from the fluid dynamics of water and CO2 to mechanical processes such as subsurface faults, rock deformations, and fractures. Ultimately, these data reveal how successfully a given reservoir could store CO2.

To generate a storage timescale, the software works to simulate reservoirs piece by piece, looking at one small section at a time and modeling how each section interacts with others nearby. Settgast explains, “If we want to simulate a subsurface volume 10 kilometers in length by 10 kilometers in width and 2 kilometers high, we break it into smaller pieces that are easier to model, coupling the individual pieces to create the larger model.” White adds, “It is like designing just the wing of an airplane versus the entire airplane—once you know how to model one piece, you can continue to build from there. This meshed model approach breaks the governing equations up into discrete elements, which produces a finite set of equations to be solved rather than an intractable number.”

Releasing GEOSX as open-source code aligns with the Laboratory’s Rapid Application Development via an Institutional Universal Software Stack (RADIUSS) Project, an HPC ecosystem created to expand software usage across the Laboratory and the open-source community through a set of libraries and tools. The open-source model and platform portability of the code support both GEOSX and RADIUSS’s mission to facilitate collaboration with external partners and the broader research community.

GEOSX depends on software packages, or multiple applications, within the RADIUSS software stack supporting its portability and memory management within supercomputer systems. Portability allows users to operate GEOSX on systems ranging from standard laptops to supercomputers and exascale platforms. Settgast says, “GEOSX has already been used on Livermore’s top-ranked supercomputers Sierra and Lassen and will run on exascale systems such as Oak Ridge National Laboratory’s Frontier and Livermore’s El Capitan, which are some of the first exascale systems.” He adds, “We are moving from petaflops (a unit of computing speed equal to 1015 floating-point operations per second) to exaflops (1018), which have 1,000 times more computational power per second.”

This GEOSX computer simulation indicates the pressure distribution in a faulted reservoir under the Gulf of Mexico. The dark red areas indicate about 2 megapascals of increased fluid pressure (more than 20 times Earth’s atmospheric pressure) near the well due to CO2 fluid injection, suggesting that the reservoir can handle high rates of fluid injection without risking caprock damage.

Currently, the code is included in the Subsurface Project, the Department of Energy Exascale Computing Project aimed at creating an exascale subsurface simulator. The effort couples Livermore’s GEOSX code and its ability to predict geomechanical stressors with Lawrence Berkeley National Laboratory’s Chombo-Crunch code, which predicts geochemical stressors. Together, the two codes form a multiphysics framework for addressing exascale computing challenges associated with the prediction of subsurface wellbore behavior and CO2 storage. Algorithmic advancements and support from the Exascale Computing Project will enable GEOSX to scale and run larger problems on the latest exascale platforms, modeling complicated physics at unprecedented resolution. This capability, in turn, will lead to better understanding of subsurface properties and characteristics, advancing current CO2 storage simulations. To validate GEOSX, the code has been compared against analytical solutions, other numerical simulators, experimental data, and field-observation data sets. The team has also incorporated uncertainty quantification, which plays an important role in engineering workflows, to evaluate GEOSX’s predictions. “Uncertainty is another reason for focusing on development of a high-performance simulator so we can run these ensemble simulations as quickly as possible,” says White. Current verification and validation benchmarks are available on the GEOSX website.

Drawing on more than two decades of experience in simulation and HPC research, Livermore, TotalEnergies, and Stanford University will enable GEOSX to become a tool that researchers all over the world can use to accelerate the development of CO2 sequestration solutions. White says, “This project is a great opportunity to combine Livermore’s expertise in earth sciences, energy systems, and high-performance computing. We are hopeful that GEOSX’s framework can play an important role in our transition towards a low-carbon future.”