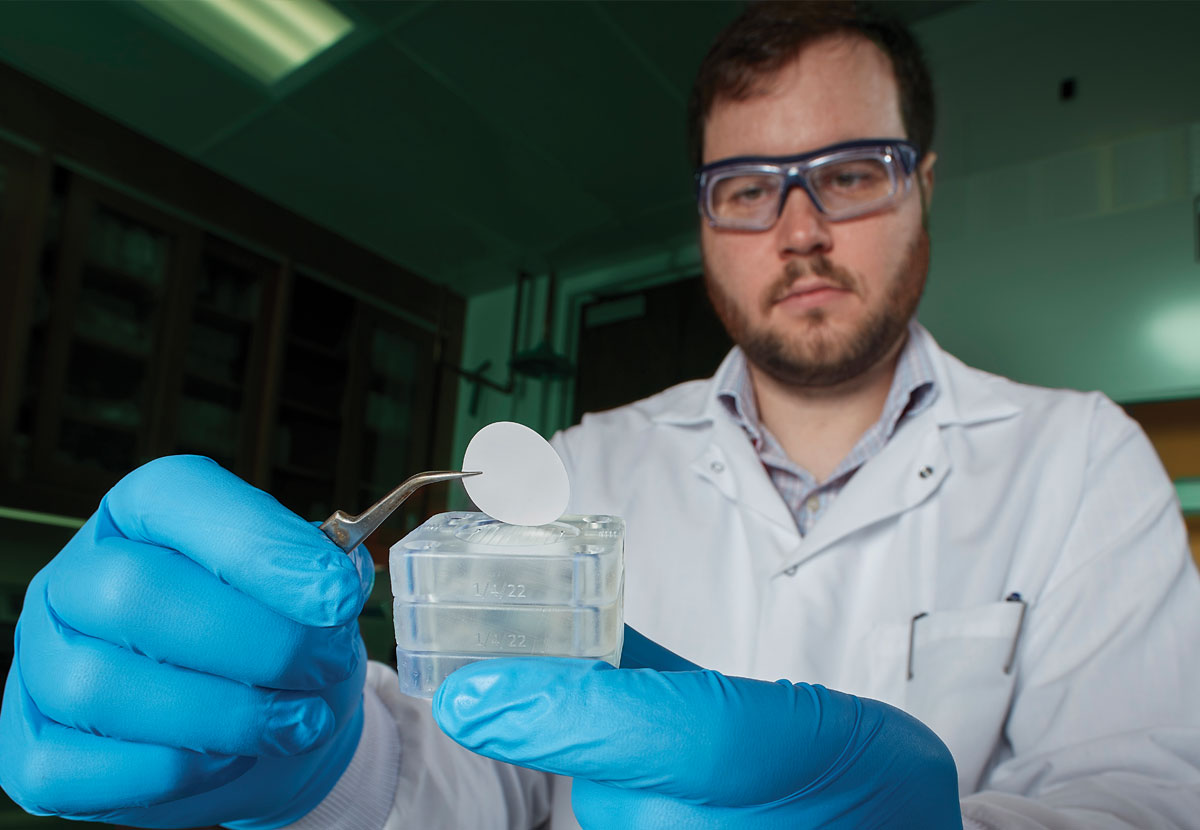 Accelerating Nuclear Forensics in the Field

Four critical questions arise immediately after a nuclear incident: What type of radioactive material was used? Where did the material originate? Could more devices or materials be found at large? And who bears responsibility? To answer these questions, nuclear forensics experts take field samples then transport them for laboratory analyses—a time-consuming method when, in the case of a catastrophic nuclear incident, time is of the essence. Recognizing the importance of faster analytical capabilities that can be conducted in real time at an incident site, a Laboratory Directed Research and Development (LDRD) Program–funded project led by radiochemist Narek Gharibyan led to development of a prototype chemistry-on-a-chip platform for field-deployable nuclear forensics. The assessment tool is designed to qualitatively identify actinides, specifically radioactive elements such as uranium or plutonium, sampled from postdetonation nuclear debris.

“Our approach allows us to use a very small sample and solution amount to quickly perform in-field analytical measurements of great forensic importance that would otherwise require a radiochemistry laboratory to analyze the samples,” says Gharibyan. Once the new platform is assembled, scientists inject a radioactive sample, and the device selectively filters the sample using a chemical extractant to separate the element of interest from the rest of the sample. After separation, scientists can quantify isotopic ratios in the separated element to determine the sample’s characteristics. 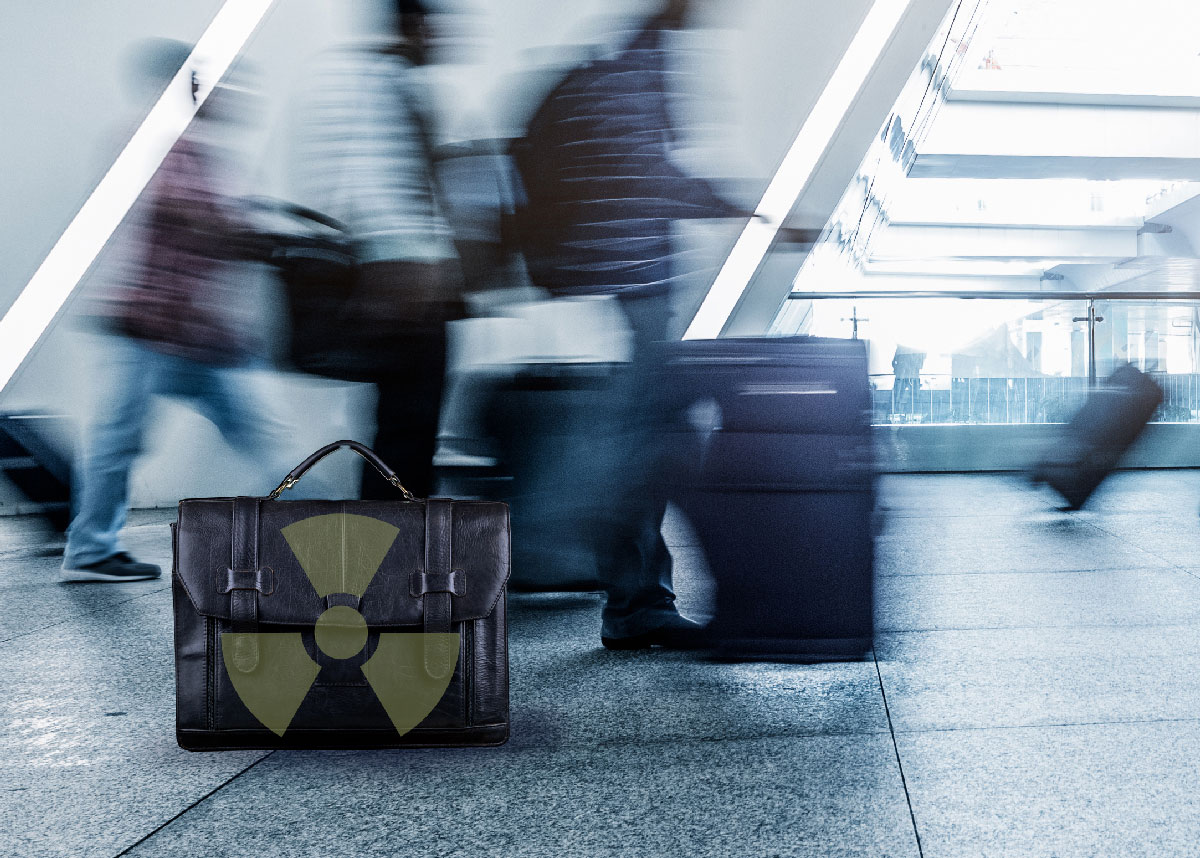 This method of extracting a radioactive element from a debris sample is comparable to preparing a cup of coffee, according to Gharibyan. “When brewing coffee, the caffeine is extracted from the grounds using hot water—the extractant—passing through a porous filter,” he says. “Imagine an additional step in which caffeine content is isolated and quantified. Our chemistry-on-a-chip platform handles all these steps in one operation.”

The chemistry-on-a-chip platform was created on 3D resin-based printers in the Livermore team’s laboratory, giving researchers the flexibility to customize the module’s design to the chemistry performed and to rapidly build and test the device using inexpensive, commercially available materials. The cost-effective design also made the platform practical for one-time use, avoiding any cross-contamination issues from sample to sample.

A flat-sheet supported liquid membrane (FS-SLM) modular design enables microfluidic capabilities similar to those in standard medical diagnostic systems. Anna Servis, a team member formerly at Livermore and now at Argonne National Laboratory, says, “To develop our chemistry-on-a-chip platform, we took the idea of a continuous-flow supported liquid membrane unit, a technology used in industrial hydrometallurgical processing, and scaled it down to process microscale nuclear samples.” The platform requires only a submilliliter microsample, yielding easier, safer analyses for scientists to perform. Additional benefits of the microfluidic platform include rapid separation times, system portability, compact equipment setup, and the potential for automated separations with minimal human intervention.

Livermore’s chemistry-on-a-chip nuclear forensic platform consists of two matching rectangular chips, 30 millimeters (mm) by 40 millimeters, with the bottom chip referred to as the “feed” and the top chip referred to as the “strip.” Each chip has a raised cylindrical element that fits inside a matching inset in the other half. Once clamped together, the two chips align and enclose a 25-mm diameter porous membrane with channels for fluid transport, creating a three-tiered mechanism through which actinides can flow. The porous membrane acts as a filter, enabling the chemical separation process of one material or substance from another. Specialized aqueous solutions added to each half of the module initiate the flow of uranium from the feed to the strip by a combination of advection (transport by bulk motion of fluid) and diffusion (movement from higher to lower concentrations). After the device performs the necessary chemistry, the chip is taken out and discarded. 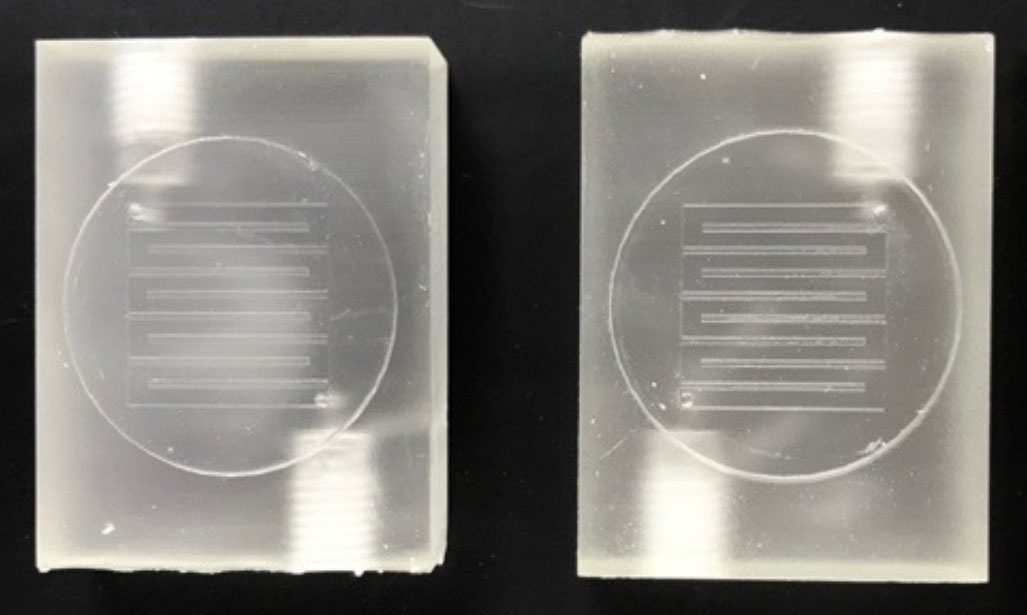 The chemistry-on-a-chip platform consists of two matching rectangular half-channels, 30 by 40 millimeters each, that, when stacked together, enclose a circular porous membrane 25 millimeters in diameter, permitting the extraction and separation of a desired material.

The team used previously acquired samples and synthetic debris to test the prototype and demonstrate how the platform would work in a real nuclear event. Computer-automated experiments controlled the quantity of solution injected and pushed through the module. Gharibyan’s team performed measurements throughout the experimental runtime, tracking the amount of radioactive material transferred to the strip. On average, the device produced results in 20 to 30 minutes, with faster processing times for materials higher in concentration and slower times for materials lower in concentration.

Gharibyan’s team performed two kinds of separation experiments: single stage and multistage. For the single-stage separation of either uranium or plutonium, an extractant called tributyl phosphate (TBP) was added to the chip’s membrane, causing the element of interest to bind to and join the extractant. TBP, coupled with the module’s aqueous conditions, permitted the flow and transport of uranium and plutonium across the membrane and subsequently the strip, separating and purifying the sample. Once separated, a detector analyzed and quantified the stripped, “clean” sample. During a real nuclear incident, this analysis would tell scientists specific details about an element’s characteristics and origin.

To separate a sample containing both uranium and plutonium, scientists used multistage separation methods and employed extra microfluidic modules for each additional separation step. First, the extractant TBP was added to the membrane, pulling uranium and plutonium away from other constituents in the sample. Since TBP extracts both uranium and plutonium, another extractant called tridodecylamine was added to pull plutonium away from uranium. The researchers repeated this second step to ensure the actinides were completely separated from each another. Once the two elements were separated and isolated on their own chip, a detector quantified each element’s mass and isotopic ratios independently. Gharibyan says, “In both single- and multistage-separation methods, once the element is purified from all other material, the radioactive decay of the element’s isotopes allows us to measure the amount of each radionuclide found, addressing parameters such as the age of the material, which can range anywhere from months to billions of years old.”

After separation, the team, which included Laboratory postdoctoral researchers Kevin Glennon and Hector Valdovinos Uribe, quantified the stripped sample using a combination of nuclear and optical spectrometric techniques. Optical spectrometry uses ultraviolet–visible light and compares the sample to a blank solution for elemental quantification of total uranium content. The more light of a given wavelength that the sample absorbs, the greater the uranium concentration. Nuclear spectrometry analyzes alpha and gamma rays emitted from the collected sample to measure the content of uranium and plutonium radionuclides. The combined data from the optical and nuclear spectrometry measurements allowed researchers to determine the actinide ratios present in the samples. 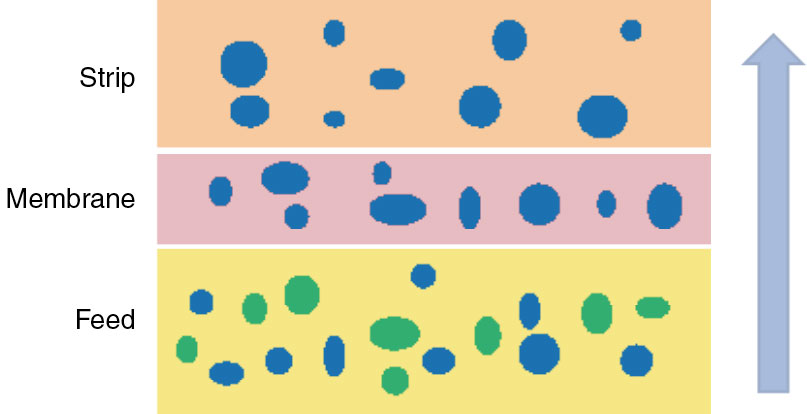 A radioactive sample is injected into the feed, and then the device’s porous membrane selectively filters the sample using a chemical extractant. After 20 to 30 minutes, nearly all of the uranium (blue) has flowed to the strip to be quantified, filtering out any debris (green).

LDRD sponsorship of the chemistry-on-a-chip platform was managed through the Laboratory’s Physical and Life Sciences Directorate with funding from Global Security’s (GS) Nuclear Threat Reduction Program at Livermore addressing nuclear counterterrorism, a core GS mission, and the need for fast-paced forensic analysis in the event of a nuclear catastrophe. With such a versatile platform, however, scientists can tailor the device for analytical measurements of actinides other than uranium and plutonium. Due to the separation capabilities of the device, a future application may include laboratory-based forensic techniques for purifying samples before they are injected into more complex instruments, so less material is needed to make high-quality measurements.

The technology also has the potential to measure fundamental extraction parameters of interest to heavy element chemists, addressing the difficulties in measuring short-lived heavy elements. “Microfluidic techniques are an underutilized tool with transformative potential in the field of inorganic chemical separations,” says Servis. “Radiochemistry is a relatively small field. At the moment, few scientists experiment with 3D printing and microfluidics, opening a field full of opportunities.”

Gharibyan’s project has transitioned to a new initiative, the Post-Detonation Rapid Response Research (R3) Venture, a multilaboratory collaboration supported by the U.S. Department of Energy’s National Nuclear Security Administration Office of Defense Nuclear Nonproliferation Research and Development. The R3 Venture microfluidics lead Jennifer Shusterman says, “Gharibyan and his team laid a strong foundation for the application of microfluidic devices in rapid, postdetonation debris chemistry. As a part of the new R3 Venture, we hope to adapt the microfluidic platform to effectively measure actinides from more realistic debris samples.”