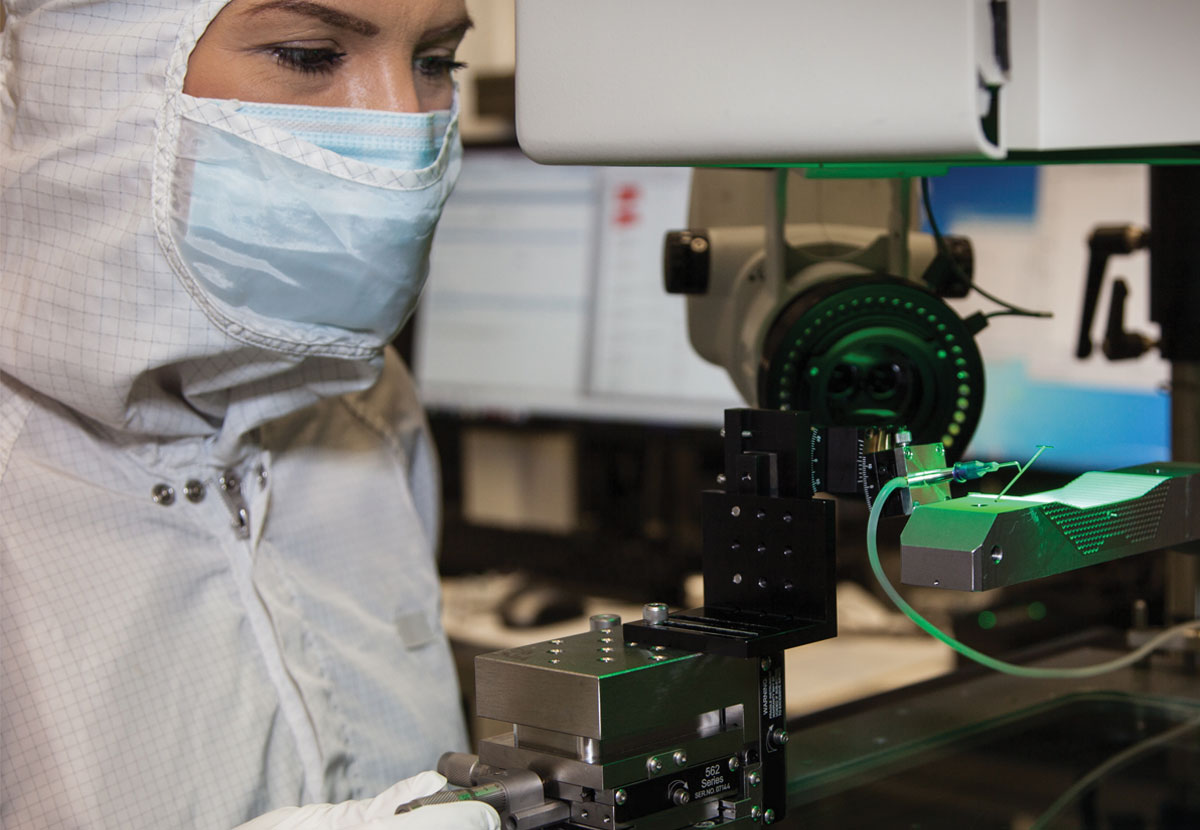 Researchers used a Laboratory-developed experimental platform at the National Ignition Facility (NIF) for the first-ever high-explosives shot at the facility. (Photo by Jason Laurea.)

How can researchers know what happens within the first few nanoseconds of a chemical reaction? Computational tools offer predictions about reaction behaviors. However, slowing time to watch a high-explosive reaction nanosecond by nanosecond and measure the evolution and phase change of solid reaction products is not possible.

To address this scientific challenge, Lawrence Livermore National Laboratory researchers aligned energetic materials knowledge and high-energy-density science expertise with experimental capabilities at the world’s most energetic laser, the National Ignition Facility (NIF). Directing NIF’s long-laser drive and two x-ray probe beams at a non-detonable sample of high explosive provided data detailing the chemical evolution of a laser-driven high explosive over less than 50 nanoseconds. Precise diagnostics developed by Livermore researchers captured, for the first time, temporally and spatially resolved data to study the formation of solid carbon products (condensates) produced by the reaction and confirm their atomic structure. “The successful shot demonstrated the diagnostics are capable of characterizing the chemistry and pressure states of high explosives, in situ, during a reaction,” says Samantha Clarke, lead scientist for the NIF experiment. “The team could not be more pleased with the outcome.” 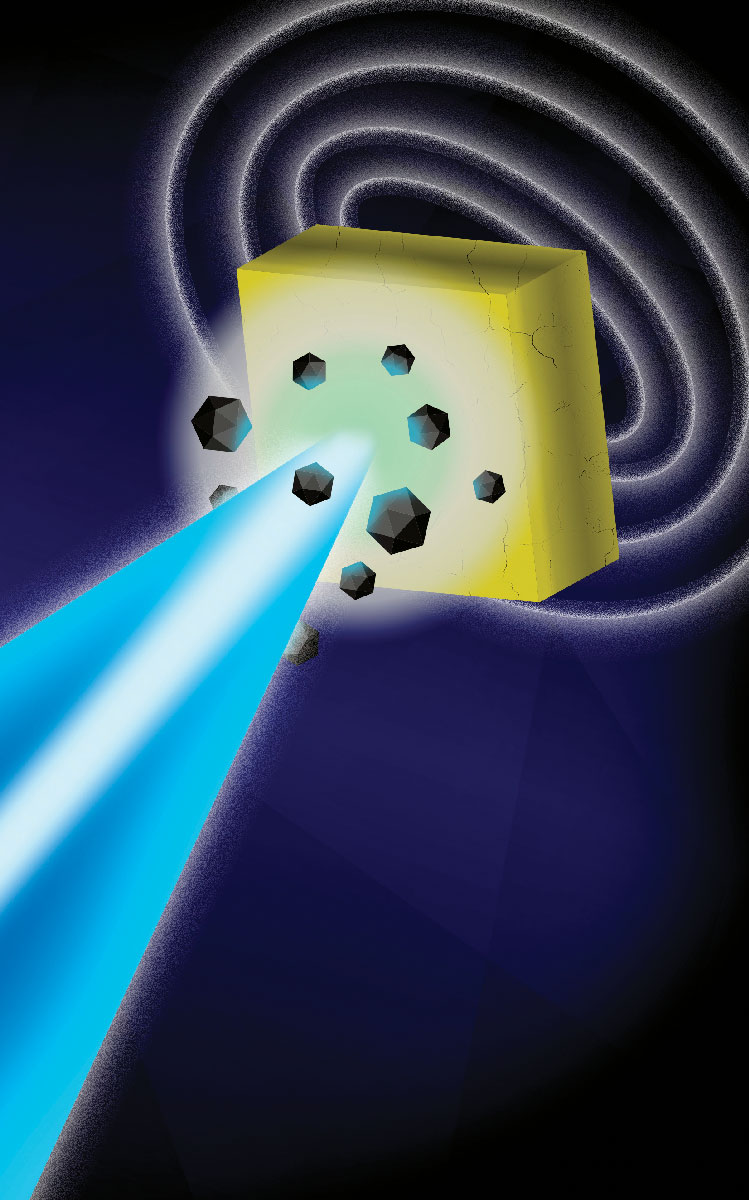 An artist’s rendering of the high-explosives (HE) shot at NIF depicts laser beams (blue stream) impacting an HE target (yellow square) and the resulting solid-carbon products (black polyhedrons). (Rendering by James Wickboldt.)

Until this experiment, the atomic structure of condensates produced by this type of high-explosive reaction had only been analyzed postdetonation or calculated by Livermore’s physics and thermochemistry codes. “The experimental data, in turn, validates and improves predictive models such as Livermore’s Cheetah thermochemical code and other hydrodynamic codes, improving future explosive simulations and analyses, predicting energy delivery for high explosives,” says Larry Fried, one of the developers for Cheetah. 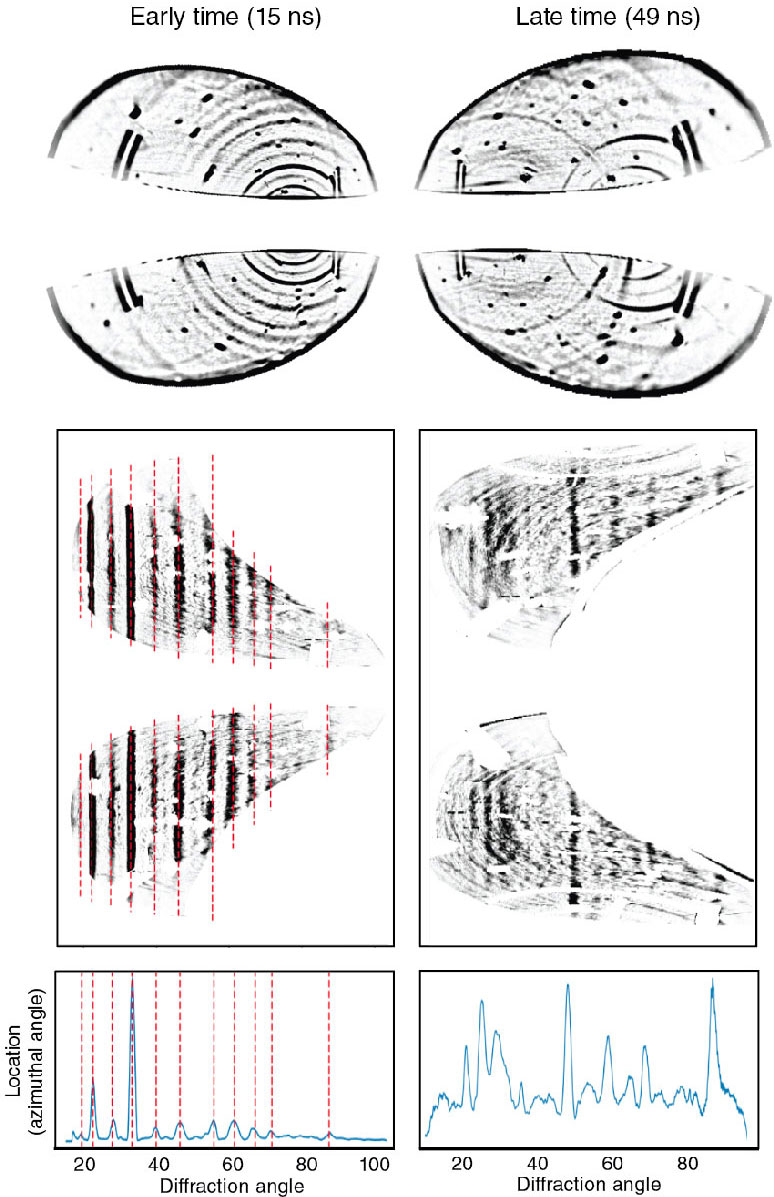 In diffraction data from the high-explosives shot at the early time point (left, XRS1 = 15 nanoseconds (ns)) and later time point (right, XRS = 49 ns), the Livermore team observed uncompressed triaminotrinitrobenzene (TATB) at early times (indicated by the dashed red lines) and evidence of reaction products, to be confirmed in future experiments, at the later time probe.

The NIF experiment represented the final step in a three-year Laboratory Directed Research and Development (LDRD) Program project. A multidisciplinary team of physicists, experimentalists, and computational experts started work in 2017 to develop diagnostic techniques that, if successful, would provide temporally and spatially resolved data of a high-explosive reaction. The team leveraged techniques from earlier LDRD projects to grow the large, single crystals of explosive needed in initial tests of new diagnostics and brought the project to scale based on experience with table-top, laser-driven experiments. “Projects with ambitious goals are based on many years of experience,” says Leininger, the project’s lead investigator.

Tests at the Laboratory’s Jupiter Laser Facility ensured the new diagnostics could measure in situ, dynamic, laser-driven, high-explosive reactions. In the next phase, the team worked to ensure viability of the final NIF experiment. A series of shots at the Omega Laser Facility at the University of Rochester confirmed the experimental configuration, diagnostic setup, and the feasibility of measuring solid products in situ using x-ray diffraction with laser-backlighter x-ray probe beams.

In year three of the LDRD project, crystal preparation marked the home stretch on the path to an unprecedented NIF shot. “We decided to use thicker crystals to look at how the carbon products form in time,” says physicist Ray Smith. “The thicker the sample, the greater the signal.” A single crystal of the high explosive triaminotrinitrobenzene (TATB) in a non-detonable quantity comprised the target for the NIF shot. TATB offers low sensitivity to friction, pressure, temperature, impact, or spark, helping to ensure the safety of devices in the stockpile. Use of the explosive passed rigorous reviews by the Laboratory’s Explosives Safety Committee and NIF Safety Program to ensure the safe execution of a high-explosive experiment. Says Ken Kasper, NIF Safety Program leader, “The advanced diagnostic systems were designed to extract experimental data from a small TATB sample. While considered thick for a crystal, the overall small sample size, less than 7 milligrams, made hazard management more straightforward.”

The LDRD project encountered an unexpected obstacle when the COVID-19 pandemic moved the Laboratory into maximum telework mode, creating project delays. “The team had worked on this project for years and wanted to see it through,” says Leininger. “Fabrication for the shot required months of preparation. Taking the shot too early would have been risky.” Laboratory managers advocated for making the necessary capabilities available and extended the LDRD project for three months, giving the team time to test and obtain results. Teleconferencing platforms became more familiar as staff adjusted to teleworking. “With in-person activities scaled back, we relied on WebEx for close collaboration with NIF staff onsite and planned to run the experiment remotely,” says Smith.

As the lead scientist, Clarke pushed ahead to coordinate all aspects of the experiment, working closely with lead designer for the shot, Damian Swift. Swift performed complex calculations to create a robust target design and laser drive to achieve the novel experiment’s desired conditions. “My background was in diamond anvil experiments,” says Clarke. “I quickly came up to speed with the skills and detailed design information required for this complex, laser-driven experiment.”

A TARDIS Just in Time

Key to the success of the experiment was the application of the Laboratory-developed experimental platform known as TARDIS, for Target Diffraction In Situ. TARDIS integrates a NIF target and x-ray diffraction diagnostic on a single platform. “For this experiment, TARDIS would tell us what we wanted to know about the inside of the explosive as it detonates,” says Fried. Although used for shorter duration experiments in the past, the team set out to apply TARDIS to a high-explosive shot with samples hundreds-of-micrometers thick and longer timescales than demonstrated previously at NIF. “We were expecting diamond formation to occur after significantly more than 20 nanoseconds, so we needed a longer drive and more time for the phase change to occur,” says Fried. As a result, the experiment used stacked pulses on NIF, requiring the longest duration ablation (vaporizing material with the laser pulse to induce high pressure) attempted to date. 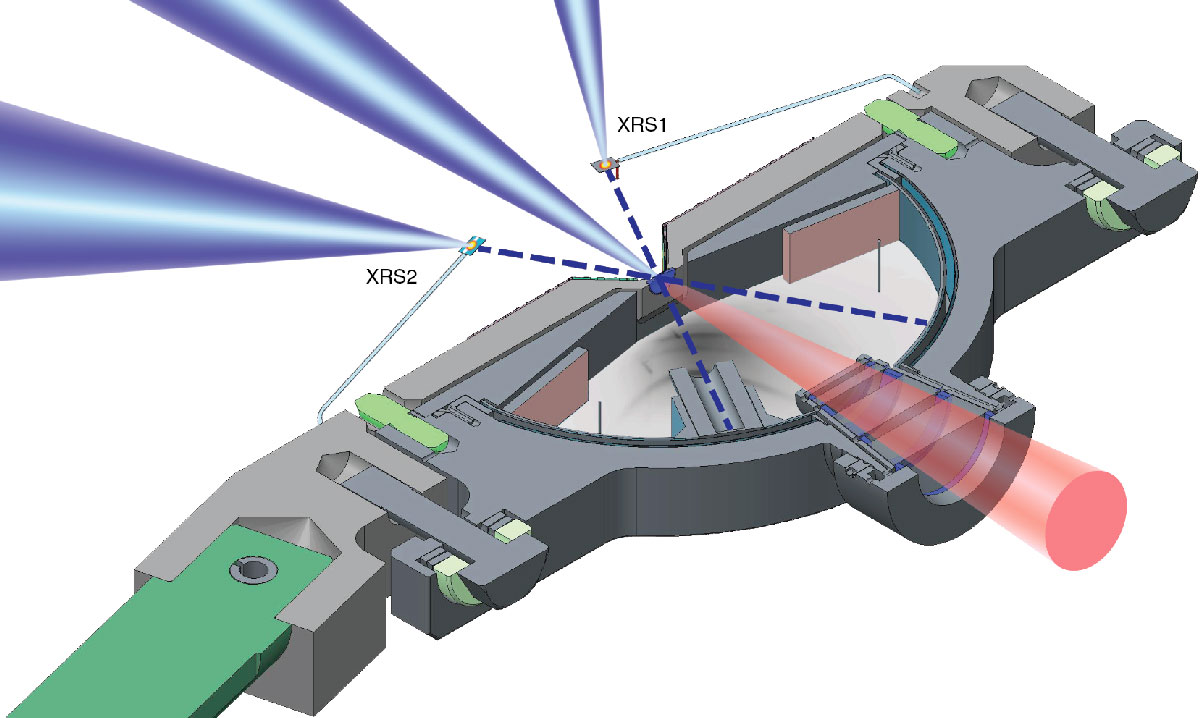 The team’s goal was to apply a carefully designed laser pulse shape to shock-compress the sample to a steady pressure. Smith adds, “This duration of shock had never been done on TARDIS. As a compression wave propagates, the spot will get smaller and smaller, so we needed a larger initial laser spot.” The team applied larger phase plates and special optical components to expand TARDIS’s typical 1.8-millimeter-diameter spot to a 3-millimeter-diameter spot. Ultimately, TARDIS was prepared for the experiment’s shock compression levels, which would exceed 150 gigapascals (1.5 million times the pressure of Earth’s atmosphere).

While the three-year project closed with the history-making shot, the successful project is just the first step in a new series of experiments to improve understanding of high explosives’ behavior. This work is continuing under the Dynamic Material Properties Campaign 2 funding, NA113. The improved diagnostics developed for the first shot will support Livermore research investigating the structure of products during high-explosive detonation and will validate predictive models. “We’re continuing work to understand the data collected in this shot, continuing to interpret the lines and structures revealed,” says Fried. “More experiments are needed for us to fully understand the chemical process behind high-explosive energy release.”

A series of follow-on experiments evaluating a range of ignition levels from low-pressure to overdriven will further expand the Laboratory’s understanding of high explosives. “We can nudge TATB to shock pressures beyond detonation conditions, speeding the dynamics to observe nanodiamond,” says Cheetah developer Sorin Bastea. “Or we can keep compressing TATB to even higher pressures until we get no condensed carbon products at all. Each experiment helps improve and further validate our models.” Leininger adds, “This work is not ‘one and done.’ Gathering more data and building our understanding will mean a great deal for chemistry and physics.”