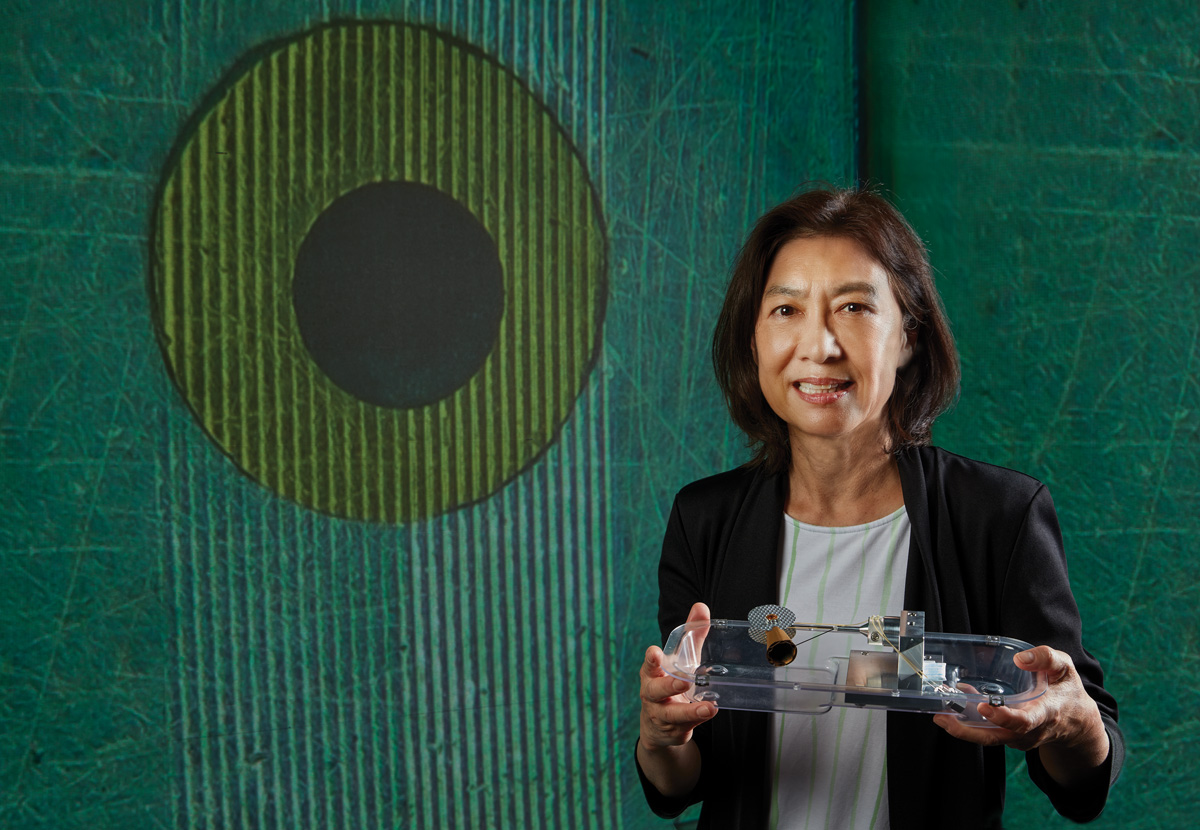 Shining a Light on Technical Excellence

Climbing the management ladder is not the only upward route on a career path, a fact long recognized by Lawrence Livermore National Laboratory. Ten years ago, the Laboratory established the Distinguished Member of Technical Staff (DMTS) program to provide a career path for advancement for those who choose to remain working in their technical fields rather than step out, full time, onto the managerial track. Livermore Director Kimberly Budil explains, “Our Lab was created to bring innovative science and technology to bear to tackle the most significant challenges facing the nation and the world. To do this well requires a high level of technical excellence, so it is critically important that we develop exceptional leaders in our science and technology ranks. The DMTS program was created to recognize these exceptional leaders from across the Lab and to shine a light on their extensive expertise and many contributions.”

Appointment to the DMTS level is the highest technical staff level achievable at the Laboratory. Those who are nominated to DMTS have a history of high-level achievement in important Laboratory programs or distinguished scientific achievements. They are often recognized authorities in their fields responsible for important discoveries with lasting impacts. Laboratory leaders nominate candidates at the request of the director, who decides when to open nominations. The last DMTS staff were named in 2019. A sample of DMTS members, from the early years of the program to the most recent induction, demonstrates that the word “outstanding” truly applies.

In 2017, physicist Hye-Sook Park was 30 years into her Livermore career and leading multiple projects at the National Ignition Facility (NIF). Among her projects was a successful campaign to develop a new “high foot” shape for NIF’s laser pulse that was more forgiving of fusion fuel capsule imperfections, the first plutonium strength experiment, and an astrophysical collisionless shock campaign. She remembers, “All of my projects were delivering incredible results, and I was in the middle of an exciting time.” Adding to the excitement that year was the notification that she received the DMTS award. “When I heard, I gave two thumbs up and shouted, ‘Yes! I did it!’ I truly appreciated that the Laboratory and my nominator recognized my enthusiasm for science and my hard work, even though I did not follow a managerial track.”

Challenging, cutting-edge science is what Park thrives on—from her early projects working on the Clementine lunar mapping satellite mission and chasing after optical counterparts of galactic gamma-ray bursts that last only tens of seconds, to studying the density evolution of metal ejecta from high explosives. “I wouldn’t be where I am now without my mentor’s and colleagues’ help,” she says. “Everything is a team effort.” Park notes that she became a DMTS without an Ivy League degree and as a foreign-born woman. She offers the following advice to young scientists: “Find a good mentor and work hard.” 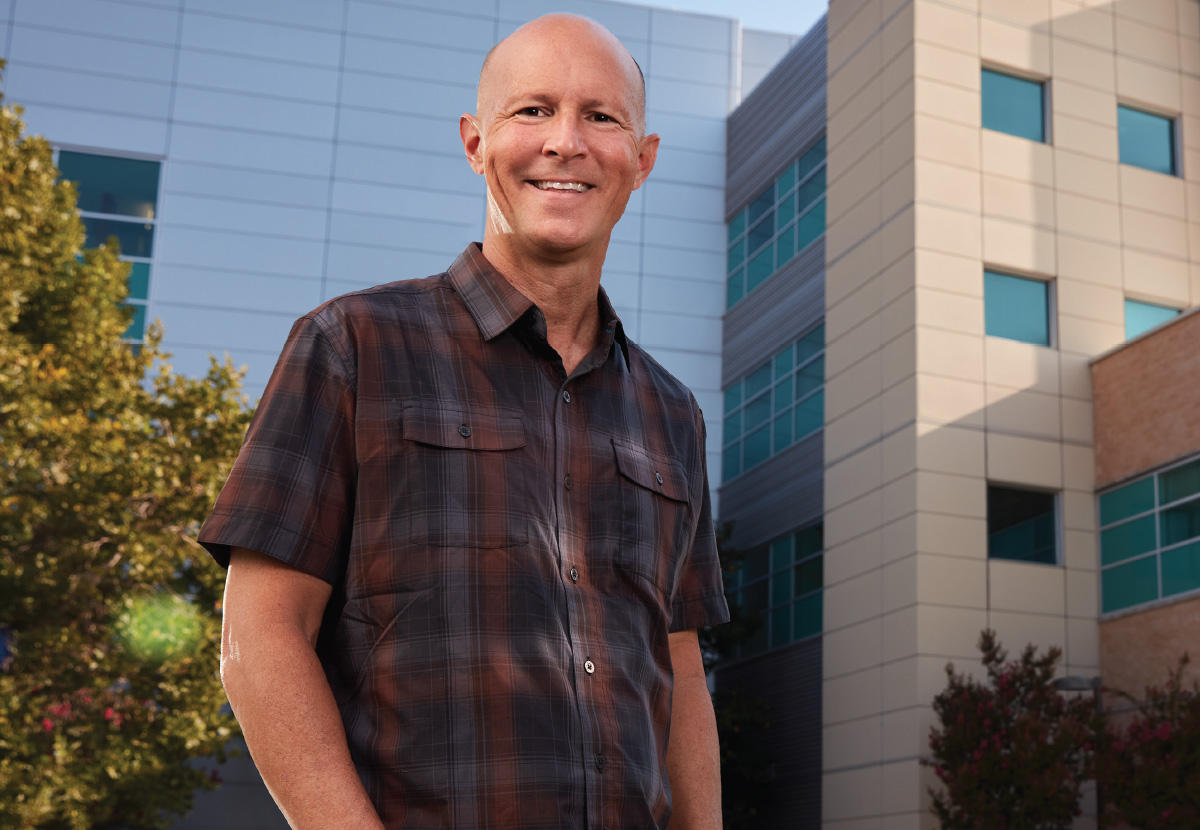 Computational mathematician Rob Falgout’s projects include developing parallel-in-time methods that can accelerate the solution process for problems such as those that arise in computational fluid dynamics. (Photo by Garry McLeod.)

Computational mathematician Rob Falgout professes he was completely surprised when he learned he received the DMTS award. “I knew my name had been thrown into the hat,” he says, “but figured my chances were slim.” When he was awarded the designation in 2018, Falgout had been at the Laboratory for nearly 27 years. One of his earliest projects involved development of the ParFlow groundwater flow code, used today to do continental-scale watershed modeling. Other, more recent efforts include hypre, a popular parallel multigrid code, and research on multigrid methods for linear systems of equations. “An area that has occupied me over the past 10 years is the development of parallel-in-time solvers,” he adds. “This research has led me to work on solving nonlinear problems, not just linear ones, and getting involved in new application areas.”

Recently, he has been developing parallel-in-time methods for hyperbolic and chaotic problems such as those that arise in computational fluid dynamics. Falgout appreciates that, through DMTS, the Laboratory supports a technical track that is on par with the one for management. He says, “I have the highest regard for people who prefer doing management work. Management is so important, but the role just doesn’t fit my personality. I believe I’m more effective leading smaller research teams and staying active in the technical work.” 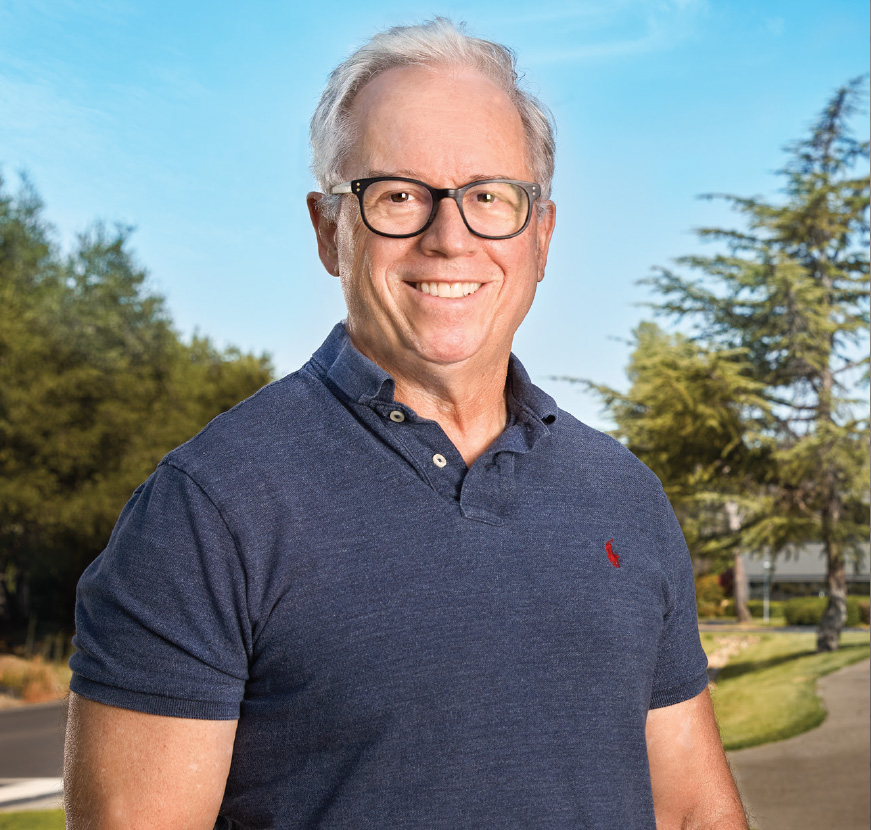 Director of the High Energy Density Science Center Frank Graziani continues to engage in research in the field of quantum hydrodynamics. (Photo by Garry McLeod.)

In 2017, when physicist Frank Graziani achieved DMTS status, he was juggling roles as computational physics associate division leader and lead for the National Boost Initiative—a multidisciplinary, multinational laboratory effort aimed at answering scientific questions underlying nuclear weapons operation—all while conducting research in high-energy-density science (HEDS). He recalls feeling honored at being accepted into the program. “Two of my mentors, George Zimmerman and Robert Tipton, had previously been selected for DMTS, as well as several colleagues such as Juliana Hsu and John Castor. Being considered in the same category as these excellent scientists was humbling.” Graziani notes that everyone he has worked with in his 32-year career has made him a better scientist. “The support and encouragement by management to pursue simultaneous paths in research and technical leadership was of great help to me. In many ways, my education began when I came to Lawrence Livermore. At 65 years of age, I am still learning.”

Graziani joined the Laboratory in 1989 as a code physicist before engaging in research in boost science and computational approaches in HEDS, becoming a verification and validation manager, among other roles. Today, he is the director of the High Energy Density Science Center. He also conducts research in quantum hydrodynamics—a hydrodynamic description of the quantum many-body problem useful for warm dense matter studies—and is developing quantum computing algorithms for solving many-body quantum systems and solving radiation diffusion problems. “Throughout my career here, I have worked hard to balance research and technical leadership so I could do both simultaneously,” he says. “There is no other place in the world, other than a national laboratory, that I could have this type of career. The DMTS program is a wonderful way to reward an individual for a lifetime of technical contributions to Livermore’s mission areas.” 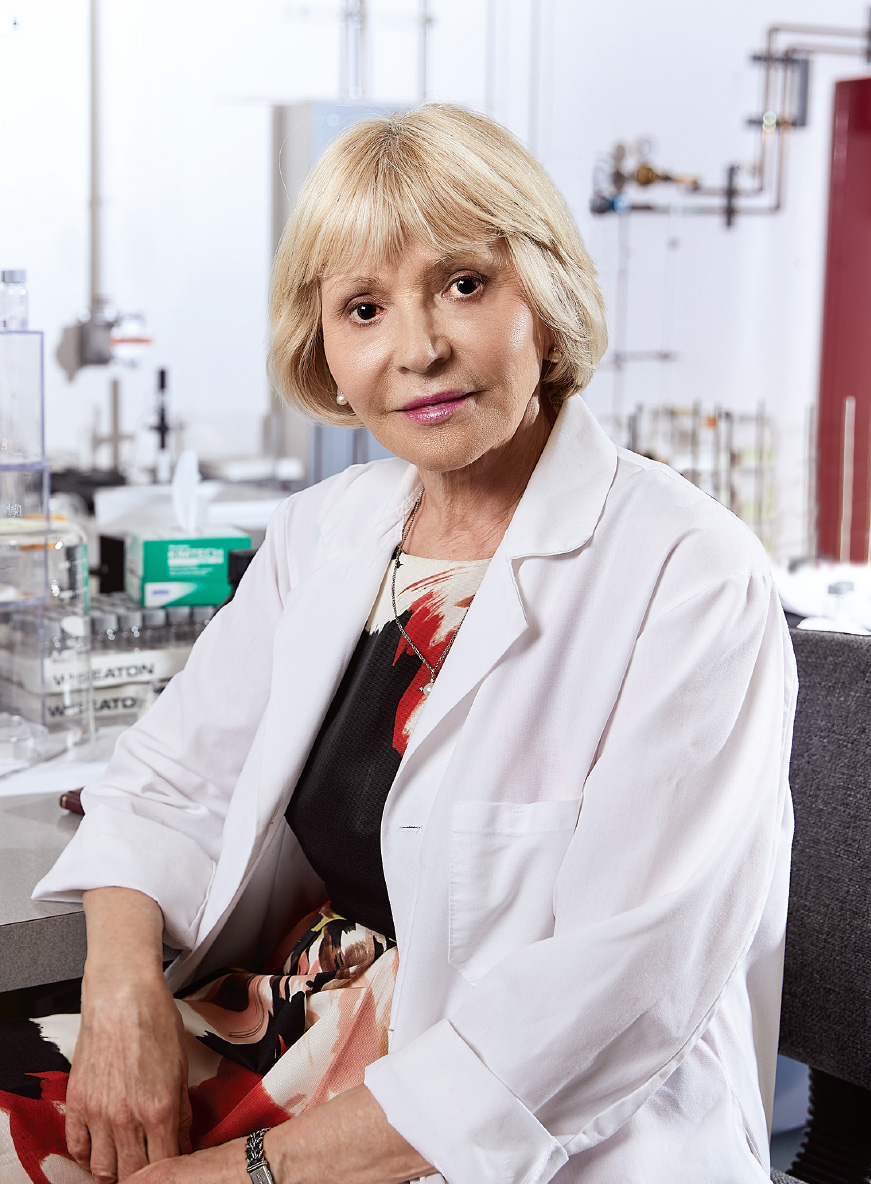 Natalia Zaitseva’s research on the growth mechanisms and physics properties of single crystals grown from low-temperature solutions has revolutionized the fields of crystal growth and radiation technology. (Photo by Garry McLeod.)

Reflecting on receiving the DMTS award in 2015, Natalia Zaitseva says she was honored by the recognition, adding, “Any accomplishment I’ve been a part of became possible only because of the hard work and devotion of the people I’ve been privileged to work with.” Her research, which focuses on the growth mechanisms and physics properties of single crystals grown from low-temperature solutions, has revolutionized the fields of crystal growth and radiation technology.

Her early work at the Laboratory included developing methods for rapid growth of super-large crystals for the NIF laser system. More recent research on developing new organic scintillation materials for radiation detection led to the development of the first plastic scintillators that differentiate between neutrons and gamma rays as well as a novel method for quickly growing organic single crystals, which was subsequently transferred to industry.

Zaitseva continues to develop new materials resulting in crystals with unique properties, including crystals that are the basis of solid-state organic scintillators that can be used for neutron spectroscopy and differentiation between fast and thermal neutrons. “I am glad for the DMTS recognition, but it hasn’t changed how I work or the work that I do,” she says. “The Laboratory provides an excellent research environment for scientists. I feel privileged to work with an outstanding team and great colleagues and appreciate the opportunity to continue doing the work I love.” 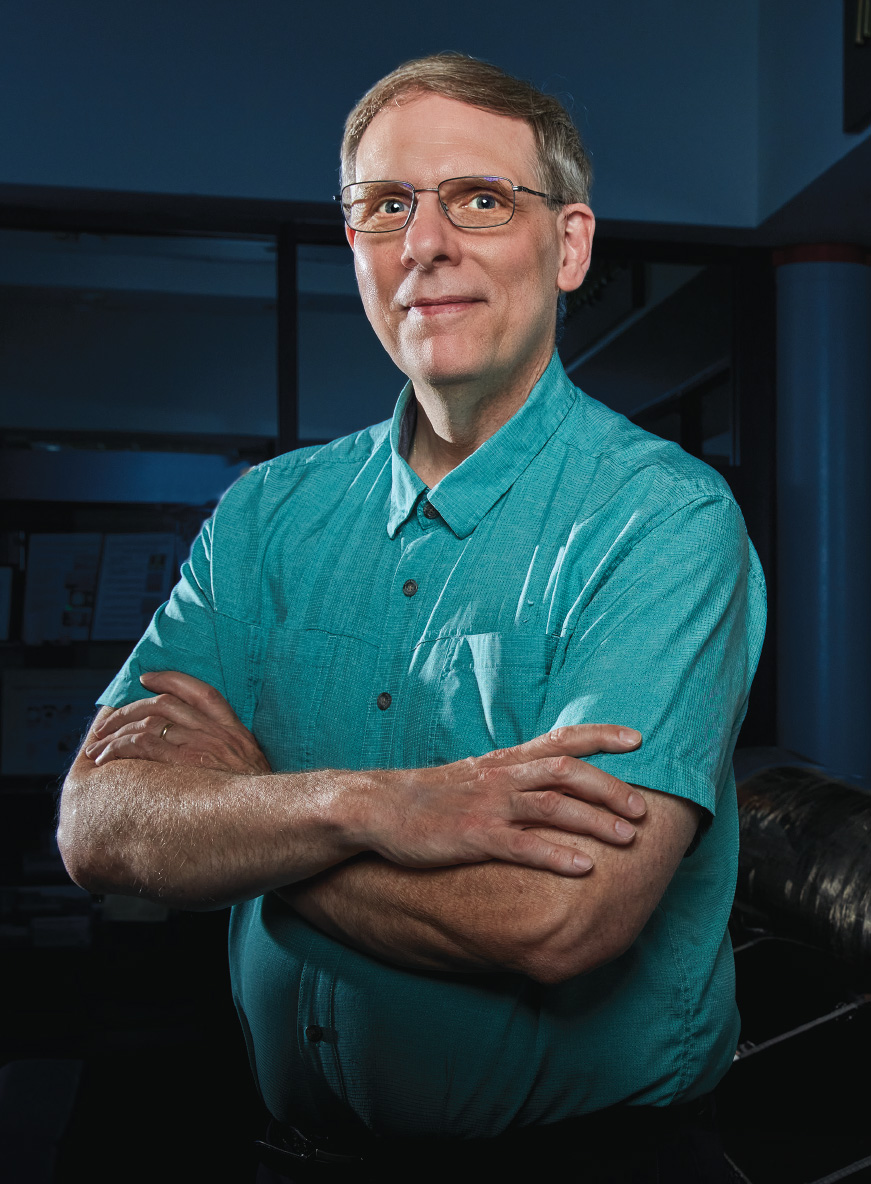 In 2019, Larry Fried was hard at work with the Cheetah thermochemical simulation code team when he was notified of his appointment to DMTS. “Since the nomination process considers your contributions across your entire career,” he says, “being elevated to DMTS is a great affirmation that a researcher has provided value to the Laboratory in an area of expertise.”

An internationally recognized leader in high-explosive science and high-pressure chemistry, Fried started at the Laboratory in 1992 as a postdoctoral researcher. By 2019, he was splitting his time between project management and technical work, including overhauling Cheetah, an advanced model based on the fundamental chemistry of detonation. “Cheetah was originally developed in the mid-1990s to run on central processing unit-based (CPU-based) computer systems. By 2019, we were working on ways to make it run on next-generation, graphics processing unit-based computing platforms, such as (Livermore’s) Sierra,” he says. A recent breakthrough now allows Cheetah to run on a Sierra node 15 times faster than on CPU-based nodes.

Fried is also part of a team that is investigating new techniques for predicting the chemical reactions of explosives and other organic materials. “Technical work is what I enjoy most,” says Fried. “Besides working with codes, I also talk with experimentalists and people who do molecular simulations. The DMTS program shows that the Laboratory has two demonstrable career ladders—one managerial and a second that is technical—with DMTS being the apex of the technical ladder. Receiving the DMTS recognition encouraged me to continue focusing much of my energy in the technical direction, doing the work I love to do.”

TRegarding DMTS staff, Patricia Falcone, the deputy director for Science and Technology, notes, “Laboratory scientists and engineers who are recognized as DMTS are truly distinguished. Each one has delivered extraordinary accomplishments in science and engineering in support of the Laboratory’s missions. Each one is widely recognized within their scientific disciplines and the academic and sponsor community. Each one is a Laboratory role model for discovery and innovation. I know I benefitted in my career from opportunities to work with the most distinguished technical people in my research community; I hope all our staff take advantage of opportunities to work with these outstanding people.”