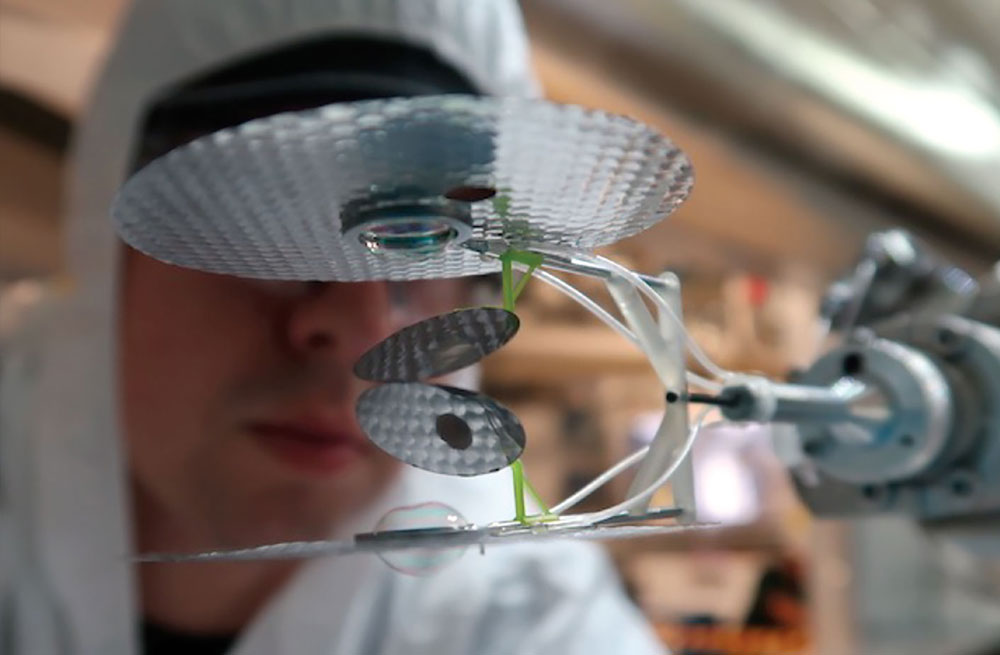 A target assembly for plasma amplifier experiments combines beams inside a plasma created within each of two gas-filled bags situated at the center of shields to block stray light. The combined beams impact the tantalum disks in the center, and the resulting x-ray emission is used to measure beam intensity.

The Department of Energy's Laboratory Directed Research and Development (LDRD) Program has been an engine of discovery for almost 30 years, investing in research that strengthens and advances Livermore's core competencies, develops future scientific leaders, and grows Livermore's intellectual property catalog. In 2018, the Laboratory initiated a pilot program for Disruptive Research (DR) projects to support the pursuit of exceptionally innovative ideas with the potential to open new research directions.

“All LDRD projects are high-risk, high-reward,” says LDRD Program Director Doug Rotman. “In designing the DR pilot, we sought even more unconventional ideas, motivating the entire Laboratory to embrace scientific and technical risk to achieve mission-critical, transformational results.” An interdisciplinary committee developed the pilot and crafted a call for proposals focused on disruptive ideas and high-risk tolerance. DR proposals identify the largest barrier to project goals and a strategy to surmount that barrier as early as possible, while also charting go-no-go decision points along with way.

After down-selecting from the more than 80 white papers received, the committee selected nine proposals for the initial round of DR funding—between $400,000 and $2 million per year for up to three years. Project mentors meet with each team quarterly to discuss ideas, challenges, solutions, and exit strategies. “As scientists, we're trained to look for risk-mitigation strategies,” says Materials Engineering Division Leader Chris Spadaccini, DR committee chair. “When designing the DR program, however, we took a different approach to managing risk. We hoped to inspire culture change at the Laboratory by investing in high-risk ideas and, if appropriate, accepting that researchers move on when results point in a different direction.” The following projects, now in their third year of funding, represent the breadth and creativity of Livermore researchers selected for the pilot program.

Outside the Black Box

Historically, physicists have described fundamental knowledge using equations from which they derived follow-on discoveries. “From a simple physics equation like 'force equals mass times acceleration (F = ma),' you can, by inspection, glean insights and understanding about the underlying physical process,” says computer scientist Brenden Petersen, who leads one of the DR projects. Artificial intelligence (AI), however, generates data without providing any interpretation. Deriving a mathematical expression to fit a data set—a problem known as “symbolic regression”—presents a challenging task for AI.

Petersen's team has developed and tested an algorithm that uses a recurrent neural network (RNN) to randomly generate mathematical expressions as sequences then train the model to generate better-fitting expressions. Each item in the sequence—whether a variable or a mathematical operator such as cosine—is drawn from a library of tokens. The algorithm samples expressions and trains the model using fitness to the data set as a learning signal. A paper describing the team's work ranked fifth out of nearly 3,000 submissions to the 2021 International Conference on Learning Representations.

The algorithm has broad applications such as learning interpretable strategies for optimal control or designing antibodies to bind to a particular pathogen. In this application, different amino acids take the place of operators like sine and cosine, and the algorithm uses binding affinity as a learning signal. In the project's final year, the team will test their framework for other discrete optimization problems. 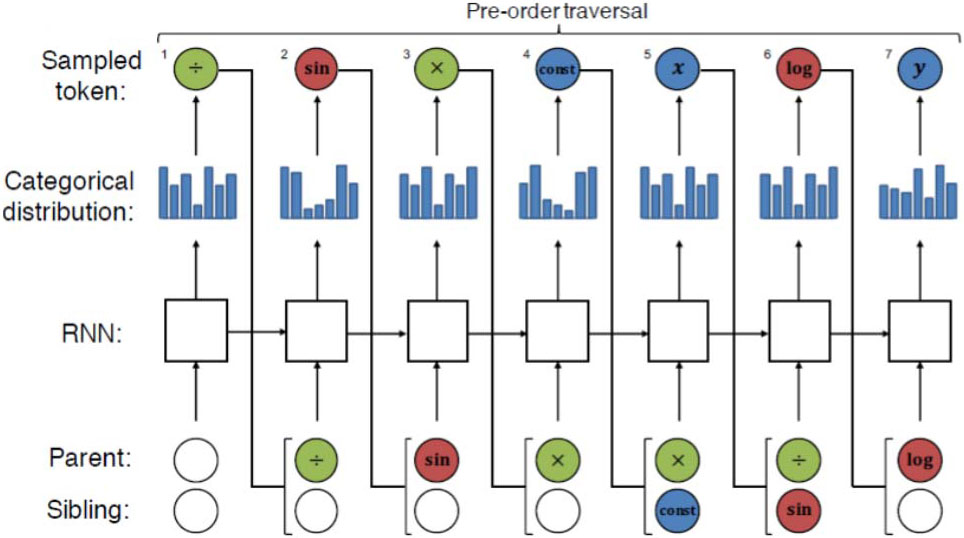 In this potentially disruptive approach to generating simple equations that describe highly complex data sets using a recurrent neural network (RNN), each term in an equation such as a variable or mathematical operator is represented as a token (shown as circles, above). RNN emits a distribution over tokens, a token is sampled, and the parent and sibling of the next token are used as the next input. Subsequent tokens are sampled until the tree representing the mathematical expression is complete.

The collisions of atomic nuclei, and their constituent neutrons and protons (collectively called nucleons), power the evolution of stars and other astrophysical phenomena, create most of the universe's elements, and inform nuclear weapons stockpile stewardship. However, even with today's most powerful high-performance computing (HPC) machines, nuclear dynamics simulations add a high degree of difficulty as one additional particle can increase the number of equations exponentially. Livermore researcher Sofia Quaglioni leads a DR project to develop methods for performing complex nuclear calculations on a prototype quantum computer.

Livermore's Sierra computer, one of the world's fastest systems at 125 petaflops (125 quadrillion floating-point operations per second), represents a giant step over the Laboratory's first supercomputer, the Univac, installed in 1953. The jump from classical to quantum computers could be as great a leap in computing power. Quantum computers use quantum states known as qubits to encode and process an exponentially larger amount of information than classical computers using bits, making them ideal to simulate nuclear dynamics. “However, quantum computers are still very experimental and, like the vacuum tube circuits of the 1950s, prone to error,” says Quaglioni.

Sources of noise from uncontrollable physical processes in the equipment and in the environment around the quantum processor perturb and disrupt the operational fidelity of the qubits. Quaglioni's DR project set out to establish an unconventional protocol resilient to the quantum noise and then demonstrate nuclear dynamics simulations on Livermore's quantum computing test bed. The protocol employs a minimal number of continuous gates—discrete, preset quantum-logical operations—customized to realize the desired nuclear dynamic interaction rather than long sequences of gates typical in quantum computing. The team has tested its approach, demonstrating the evolution, with time, of two interacting neutrons. “Our simulation achieved more than 99 percent fidelity and a one-hundred-fold improvement in simulation time—500 timesteps versus less than six—compared to previous simulations on digital quantum computing platforms,” says Quaglioni.

The relatively simple two-particle simulation benchmarks the method's performance. The protocol developed will increase quantum simulation capabilities by multiple orders of magnitude, enabling near-term quantum computing platforms to address a broad class of problems. “Quantum computers offer the promise of a unified approach to nuclear dynamics simulations from 5 to 250 nucleons,” says Kyle Wendt, a staff scientist working with Quaglioni. “The same simulations would require hundreds of millions of hours of computer time on a classical, digital HPC system.”

The first lasers used crystals to generate beams of coherent light, earning a Nobel Prize for the inventors. By the late 1960s, lasers reached intensities of 1015 watts per square centimeter (W/cm2). With the invention of chirped pulse amplification, ultrashort laser pulses can be amplified up to 1023 W/cm2. (Donna Strickland, who worked at Livermore, shared the Nobel Prize for this development.) Further intensity increases have stalled because forcing more energy through solid laser optics damages the optics material or causes it to shatter. A DR project led by Patrick Poole aims to significantly increase laser power and intensity using plasma as the amplifying medium.

Plasma optics can be generated and manipulated, replacing conventional solid optics that have reached damage thresholds. Poole's work takes a new approach to optics that builds on recent research at Livermore's National Ignition Facility (NIF). A team of investigators combined several laser beams within a plasma (a high-temperature gas of ions and electrons) to create a single beam of 10 times higher energy than the original seed beam. Plasma optics advanced the power and intensity of lasers, boosting their ability to probe the physics of matter and energy.

Poole's team has developed a plasma optic using a 10-millimeter plastic balloon filled with C5H12 (pentane) gas, irradiating it with a cluster of laser beams in a prescribed sequence, heating the gas to a plasma, generating a high electron density, and then producing the output beam. In experiments at NIF, the researchers combined 21 laser beams into one with almost three times the intensity a single NIF beam could produce without damaging its solid optics. The team has demonstrated that the combined beam maintains its focusing properties after amplification, meaning it can be used for high-energy, single-beam applications, such as those where the target is too small to allow many beams inside.

With project milestones already reached—to create a higher energy beam with the high focus required for experimental use—the researchers will model and execute an experiment that produces a second plasma optic to reduce pulse time to below 88 picoseconds and use more plasma to boost the shorter pulse to even higher power. By focusing this amplified light at about 1024 W/cm2, the research team hopes to demonstrate the possibility that beams can exceed the thresholds anticipated for next-generation, high-intensity laser facilities. “A number of applications at NIF could use a beam of this intensity to unlock new physics,” says Poole.

Following the success of experiments to combine laser beams without damaging plasma optics, Laboratory researchers plan to use the original beam combiner (left) to produce a 1-nanosecond (ns) seed pulse that will feed into a second plasma amplifier to produce a shorter, more intense pulse of 88 picoseconds (ps) and further expand experimental applications.

More Results on the Horizon

Beyond the potentially high-impact results of the LDRD Program's inaugural DR projects, the researchers' work has attracted follow-on research at Livermore. Project teams have also gained important information from the experimental paths that do not go as planned.

“Disruptive research involves risk, and we understand that some projects will not attain their original goals,” says Rotman. “Our message to investigators, and everyone at the Laboratory, is that pushing the envelope is great, and we should applaud efforts to spark transformative change. The teams leading our first group of DR projects have embraced these values to achieve truly disruptive research and results.”