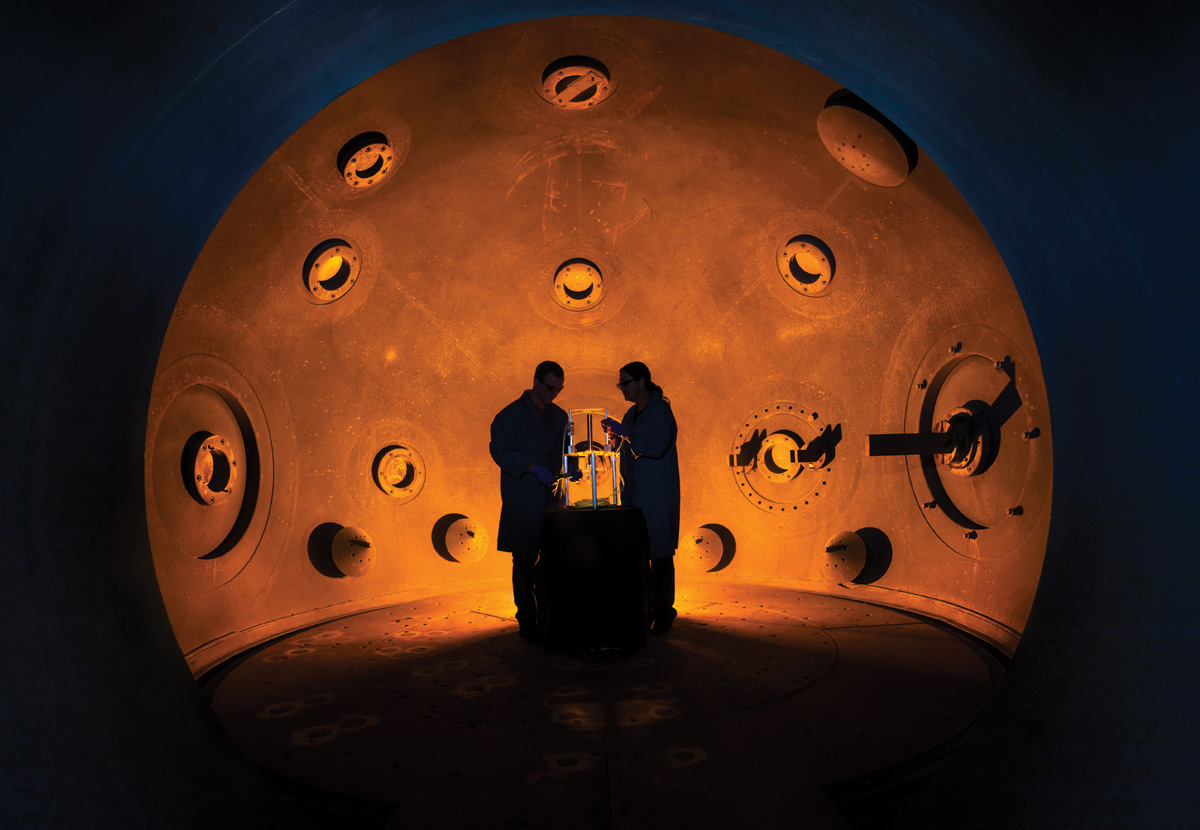 Since Lawrence Livermore’s inception in 1952, Laboratory researchers have been among the nation’s leaders in understanding, synthesizing, formulating, testing, assessing, and modeling the initiation systems and energetic materials (EM) that play an integral role in the U.S. nuclear deterrent, conventional munitions, and homeland security. The Laboratory’s Energetic Materials Center (EMC), founded in 1991, continues to build upon that critical expertise, enabling scientific investigation in support of the nuclear deterrent and keeping the nation safe from emerging explosives and nuclear proliferation.

EMs—explosives, propellants, and pyrotechnics—store energy and release it precisely as needed, making them foundational to many Laboratory programs. This family of substances can morph from solid to gas nearly instantly, reaching temperatures of thousands of degrees Celsius, and move matter several miles per second. EMC has been the focal point for EM research and development at the Laboratory, launching many of the innovations that have strengthened the national security enterprise and national security efforts around Lawrence Livermore. After 30 years, the center’s work is more important than ever as the nation faces increasingly complex nuclear and nonnuclear threats. EMC scientists apply their expertise to develop solutions for Department of Defense (DOD) conventional weapons, explore new ways to detect and defeat homemade explosives for the Department of Homeland Security, and develop strategies to counter the threat of improvised explosive devices for nuclear counterterrorism and counterproliferation.

EMC came to life at the end of the Cold War. Former EMC Director Randy Simpson recalls, “The Laboratory had contributed enormously to deterring the Soviets, and we were now shaken by their collapse.” At the same time, an anticipated transition away from nuclear testing required weapons scientists and engineers to develop and use more advanced experimental, modeling, and computational capabilities to better understand not only how EMs perform in today’s stockpile, but also how the materials’ aging processes might affect weapons performance in the future. “People at the Laboratory and nationwide worked to reimagine the nuclear-weapons complex. At Livermore, we strategized how to build upon our best-in-class capabilities to replace underground testing,” says Simpson.

Recognizing that expertise in high explosives (HEs)—a type of EM used, among other applications, to trigger nuclear devices—would remain vital to national security, the Laboratory proposed an organization in which chemists, engineers, and physicists would apply broad and deep wells of expertise and resources. The core disciplines of energetic materials maturation would combine with experimentation at world-class facilities, such as the High Explosives Applications Facility (HEAF) and the more remote Site 300, and high-fidelity modeling and simulation to provide the basis for scientific advances in EMs. Thus EMC was established to sustain ongoing HE research and serve four strategic goals: maintenance of needed capabilities for the nuclear-weapons program; development of strategic partnership programs with DOD; the transition of technology to industry from Department of Energy national laboratories; and the advancement of EM science in partnership with universities.

Over the decades, the center has transitioned from a component of stockpile sustainment to an essential player in modernizing the U.S. nuclear, conventional, missile-defense, industrial-capability, and other deterrents. As former director Ron Atkins put it, EMC has become “the country’s most important repository of energetic materials expertise.” The defense, oil-exploration, mining, and explosives-detection industries benefit as well, using EMC science and technology to optimize materials efficiency for applications as varied as warheads and oil well stimulation, improve operational safety, capitalize on novel materials, and improve radiographic and chemical detection.

New experimental platforms, advanced diagnostics, utilization of next-generation light sources, and techniques for enhanced in situ chemical and physical characterization of HE materials are also being developed. Advanced manufacturing methods aid material discovery to reduce development cycles for scale-up of feedstock materials and improve the responsiveness of manufacturing HE components. The proposed Energetic Materials Development Enclave at Site 300—a partnership between Lawrence Livermore and the Pantex Plant—will drive a new approach to accelerate the adoption of new explosive materials and production capability within the nuclear security enterprise. By working directly with Livermore’s production agency partners, the enclave will enable concurrent design and production development and move from concept to production-ready materials seamlessly. 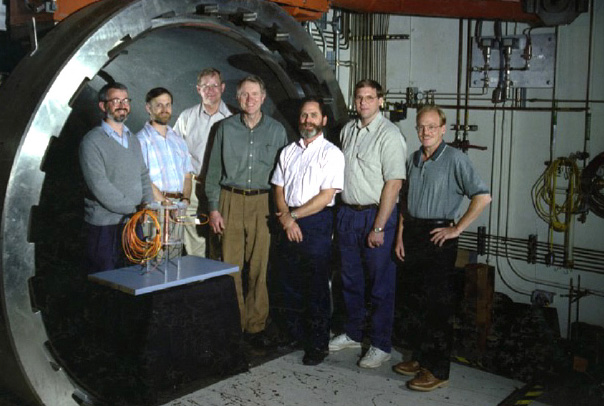 Since the mid-2010s, EMC has embarked on its greatest challenge yet with the launch of nuclear modernization efforts at Lawrence Livermore, beginning with the arrival of the W80-4 Life Extension Program (LEP) in 2014, and more recently with the W87-1 Modification Program in 2019. With the W80-4 LEP, the Laboratory leads the charge to develop means to remanufacture PBX 9502, an insensitive high explosive not in production at scale since the early 1990s.

EMC researchers also shepherded development of the novel explosive LX-21, the first new explosive to be introduced into a nuclear warhead without full-scale underground testing. From explosives development and scale-up to production, Laboratory scientists have diligently moved forward. In the last decade, the Lawrence Livermore HE enterprise has earned the HE R&D Center of Excellence distinction, and EMC researchers play a critical role in maintaining the peak level of performance.

“You could say we’ve been waiting for this moment in time,” remarks Lara Leininger, current director of the EMC. “The center has responded to address the magnitude of the challenges faced today. Our collaboration with colleagues in both the Weapons and Complex Integration and Global Security Principal Directorates has been excellent.” 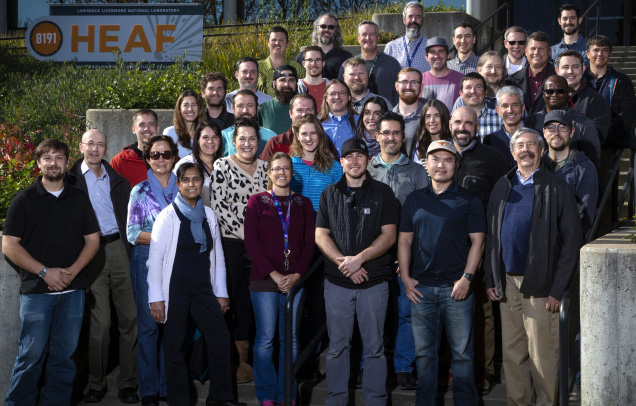 Looking toward the 2030s and beyond, the center aims to enable the study of a reacting material at nanosecond resolution and micrometer-length scales not previously possible. Future advances require scrutiny of predictive codes, taking advantage of graphics processing unit architectures and applying machine learning and data science. Other priorities include diagnostics to measure the temperature and product set of chemical reactions in situ at these shorter time and length scales; accelerated materials development through responsive and agile manufacturing and data science techniques; and development of new HE molecules by leveraging high-performance computing, computational chemistry, and scalable manufacturing processes.

Aggressive schedules have called for increased testing at a pace not seen for decades, and EMC plans to remain the first place the National Nuclear Security Administration, DOD, and other government agencies think of when they need energetics expertise. Says Leininger, “After 30 years, the Energetic Materials Center is ready and agile for whatever comes next.”