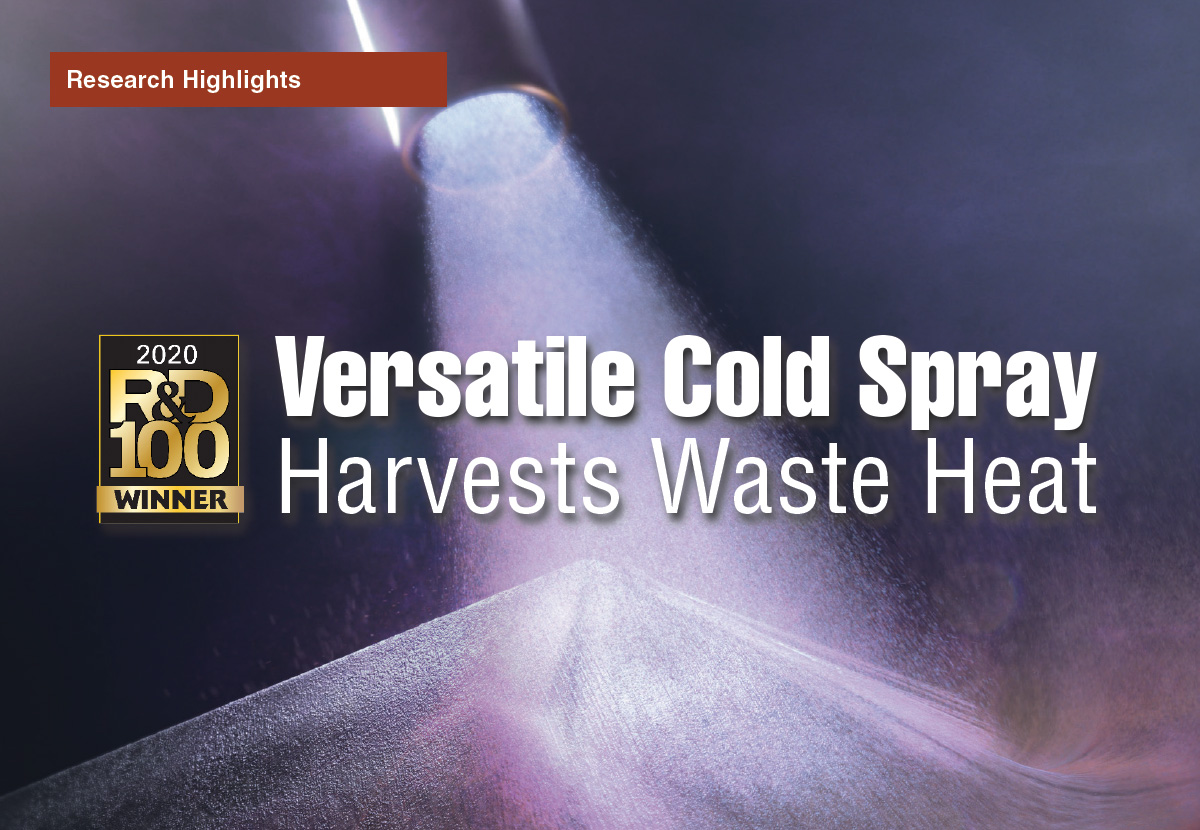 Any device that uses energy—from a refrigerator to a car to a turbine engine—loses heat to the surrounding environment. In the United States, up to 50 percent of the 23 quadrillion British Thermal Units (quads) of energy used by the industrial sector is lost to waste heat. To illustrate the significance of this energy loss, consider that 8 quads of energy would meet the nation’s total energy needs for a month, based on Lawrence Livermore National Laboratory’s 2019 energy use data. Finding a viable way to collect industry’s waste heat would harness a significant, yet virtually untapped, energy resource.

Thermoelectric materials may be the answer. The materials exhibit both high electrical conductivity and low thermal conductivity. Therefore, they generate electricity in response to changes in temperature. Coating heat-emitting surfaces, such as cooling fins and transfer pipes in industrial settings, with thermoelectric materials would create a means to capture heat otherwise lost to the surrounding air and then convert it into electricity. Ordinary manufacturing parts and components would become mini-generators making beneficial use of once-wasted heat. This resourceful concept falls short, for now, because techniques used to apply inherently brittle thermoelectric materials to the shapes and types of surfaces found in a typical manufacturing setting destroy the materials’ unique heat harvesting qualities.

Versatile Cold Spray (VCS) injects micrometer-scale materials downstream of an innovative nozzle. The result is gas–particle flow at a supersonic, uniform speed that slows just short of the coating surface, as indicated in the computer simulation (bottom image). The gas–particle mixture then conforms to the surface rather than deflecting at right angles.

Versatile Cold Spray (VCS), an additive-manufacturing technology developed through a partnership between Lawrence Livermore and TTEC, LLC., solves the problem of maintaining thermoelectric function in materials applied in place, opening the door to capturing waste heat in industrial settings. “VCS stands apart from other additive manufacturing techniques by preserving the crystal structure and functional properties of brittle materials such as thermoelectrics,” says Livermore physicist Harry Radousky, the project’s lead investigator. “This feature, combined with VCS’s portability and capability to achieve greater than 99 percent coating density, regardless of the surface type or shape coated, means that we can transform heat-emitting parts into working thermoelectric generators.”

For this significant step forward in additive-manufacturing innovation, VCS received a 2020 R&D 100 Award. R&D World selects 100 new technologies worldwide for its annual award from nominees in categories including software, batteries, analytical instruments, security devices, and robotics, among others. “We are honored to win this award in partnership with Lawrence Livermore,” says Richard Thuss, TTEC president. “We are even more gratified to have developed an easy-to-use device that can make beneficial use of the country’s industrial waste heat and maximize our nation’s energy resources.”

VCS builds on conventional cold spray, a technique used to apply malleable materials such as steel, copper, and chrome, by spraying micrometer-scale material particles traveling at supersonic velocities onto a surface. “Cold,” in the case of cold spray, is relative, referring to the fact that the gas is delivered at a temperature below the material’s melting point. However, conventional cold spray cannot create functionality. The older technique only repairs materials, with the exception of adding corrosion- or abrasion-resistance to surfaces.

The particles in brittle, functional materials such as semiconductors, including thermoelectrics, and permanent magnets tend to shatter or deflect on impact rather than build a high-density deposit when applied using conventional cold-spray technology. Other additive-manufacturing technologies such as plasma spray, direct metal writing, and laser powder bed fusion (LPBF) either require extensive post-processing to recover functional properties of coating materials or they destroy the crystal structure altogether. 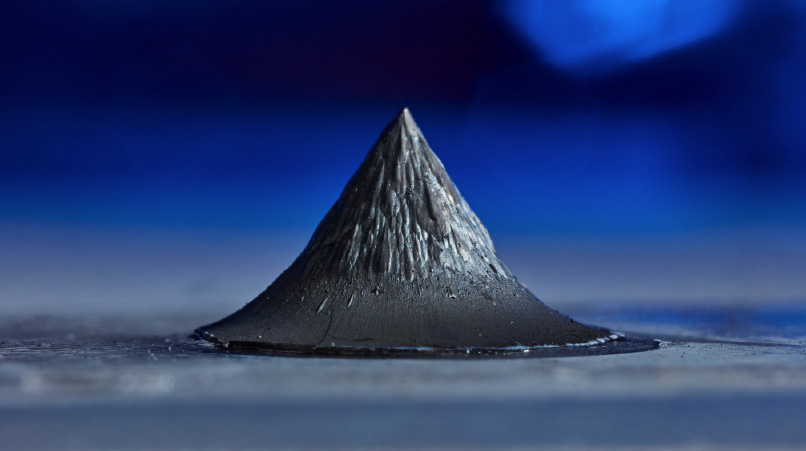 VCS can deposit dense layers of brittle thermoelectric materials, such as the bismuth telluride layers shown here, that would shatter on impact and lose function if applied with conventional cold-spray technology. (Photo by Garry McLeod.)

Controlling the size of the material particles in the coating feedstock further improves particle consolidation from becoming damaged or shattering. Additional coating layers build the concentration of the material on the surface to achieve greater than 99 percent coating density—a high mark for any additive manufacturing technology. The Livermore–TTEC team successfully tested VCS to deposit uniform coatings on metals, ceramics, glass, and some foam materials and in a range of shapes including the inside and outside of pipes.

Deployed as a lightweight spray unit and controller, VCS can coat components already installed in manufacturing facilities, unlike larger or fixed-in-place tools such as LPBF. The spray unit could be mounted on a robotic arm as well for greater coating efficiency. The streamlined design, low energy demands, and operation using primarily nitrogen, instead of expensive helium used in other cold-spray techniques, keep operating costs low.

Thermoelectric materials harvest waste heat and convert it to an electric current (left). Coating a transfer pipe or other heat-emitting component with p- and n-type thermoelectric electrodes creates a thermoelectric generator (right). Thermoelectric coatings—p-type and n-type bismuth telluride—have been applied in this example. VCS is capable of uniformly coating any shape component in place, such as the copper pipe pictured, and achieving greater than 99 percent density.

To test the possibilities for reusing industrial waste heat as an energy resource, the Livermore–TTEC team created a prototype thermoelectric generator. They used VCS to coat the outer surface of a copper pipe with bismuth telluride, a thermoelectric material, creating parallel p- and n-type electrodes. In spraying the material, VCS achieved close to full density and was nearly free of pores on the pipe’s surface. The team measured output current and then compared the results to that of a prototype in which bulk bismuth telluride was simply adhered to a pipe using conductive epoxy. The output current for the VCS-coated pipe increased dramatically at high temperatures, indicating VCS’s ability to maintain the functional thermoelectric qualities of the coating material. In addition, VCS’s ability to coat without using binders ensures excellent mechanical and thermal contact between the coated surface and thermoelectric material and sufficient electrical contact at the electrodes.

Comparing the performance of the thermoelectric generator created using VCS (red data points) and bulk material (bismuth-telluride, "Bi2Te3") adhered to a pipe (black data points), the materials maintain a similar temperature gradient between hot and cold sides (left graph). The VCS-applied material, however, outperforms the bulk application at higher temperatures (right graph) due to a combination of enhanced Seebeck coefficient—the thermoelectric response to temperature differences across a material— and improved thermal contact with the hot pipe.

The Livermore–TTEC team has also demonstrated VCS’s effectiveness in depositing other functional materials, such as magnets for motors or generators and insulation that serves as a protective layer for energy harvesting and energy storage devices. By adding different materials in sequence, VCS can create complex devices combining semiconductor, magnetic, thermal, and electrical isolation functions. This capability will dramatically simplify the manufacturing of entire thermoelectric generators by reducing the process to a single technique rather than a series of separate steps. 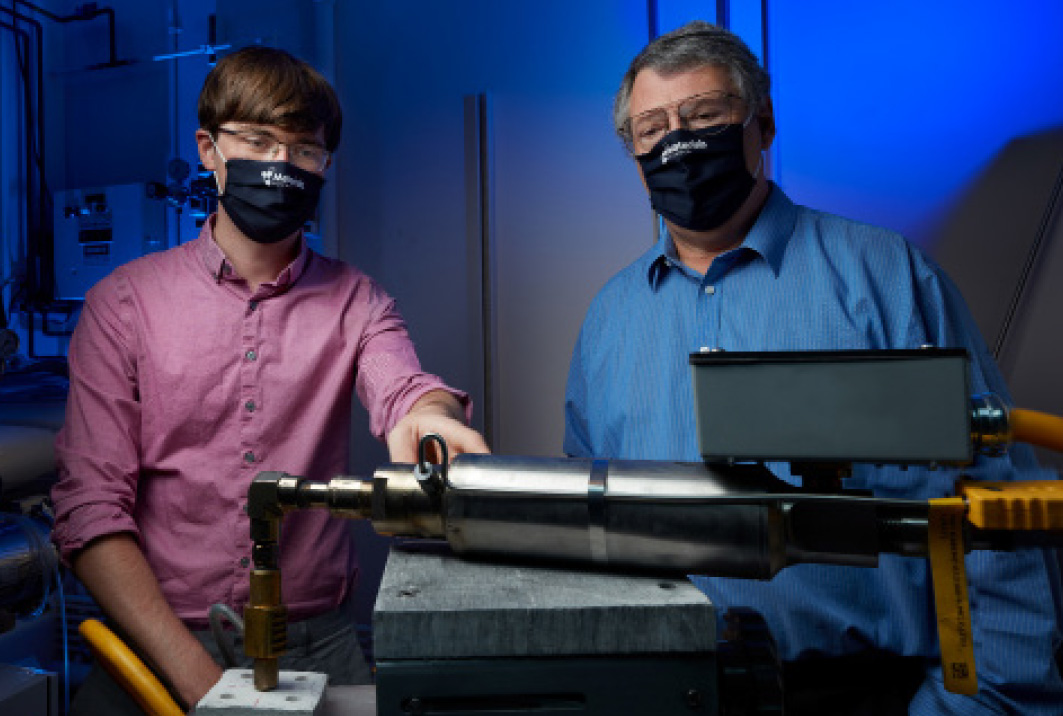 Livermore physicist Alex Baker led a collaboration with TTEC to install TTEC’s VCS system in a glove box at the Laboratory and apply advanced diagnostics to further understand all the process can offer. “The next step for VCS will be controlled-atmosphere deposition of air-sensitive materials, which our team needs to study more closely here at the Laboratory,” says Baker.

Since winning the R&D 100 Award, the Livermore–TTEC team has discussed possibilities to expand the use of VCS with thermoelectric generator manufacturers and integrated systems. “The use of VCS for energy harvesting devices, magnetic materials, and electrical and thermal insulators provides an unmatched level of versatility,” says Baker. A next step will be developing prototypes that can only be fabricated using VCS, creating a strong business model for the technology. Adds Radousky, “We’re excited to see what new ideas come along now that we can run experiments onsite at Livermore. We’re open to collaborations, keen to test a wide range of materials, and ready to demonstrate that VCS really lives up to the ‘versatile’ in its name.”