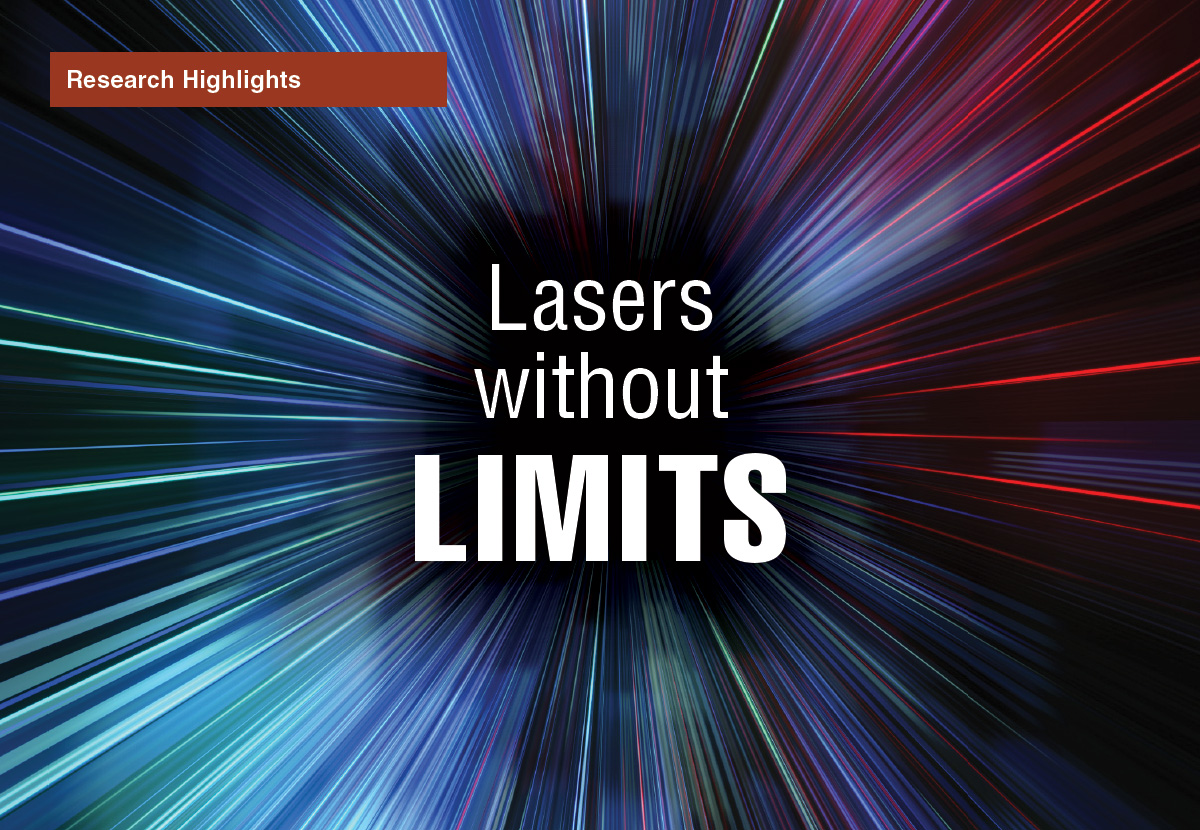 Since opening in 2009, the National Ignition Facility (NIF) has helped scientists produce dizzying amounts of cutting-edge research and brought the Department of Energy (DOE) closer to producing a self-sustaining nuclear fusion reaction. With precision diagnostics, targets, and a carefully managed maintenance schedule, NIF fires its 192 beamlines at close to full capacity, gathering data from approximately 400 experimental shots per year. What would happen if scientists could shoot NIF more powerfully, more often?

Livermore scientists and engineers are anticipating the next generation of laser technology: very-high-average power short-pulse lasers. Designed, developed, and constructed by Lawrence Livermore, the High-Repetition-Rate Advanced Petawatt Laser System (HAPLS) at the Extreme Light Infrastructure (ELI) Beamlines facility in Dolní Břežany, Czech Republic fires up to 10 hertz (Hz) or 10 times per second. “While not yet the scale or energy of the NIF’s Advanced Radiographic Capability (ARC), HAPLS can perform about 40,000 experiments in the time it takes ARC to perform one, which means you can potentially get 40,000 times more data,” says Tammy Ma, the Advanced Photon Technologies (APT) program element leader for high-intensity laser high-energy-density (HED) science at Lawrence Livermore. High-repetition-rate short-pulse facilities such as HAPLS are the next frontier in laser technology, and Livermore has the expert know-how to take them to the next level. 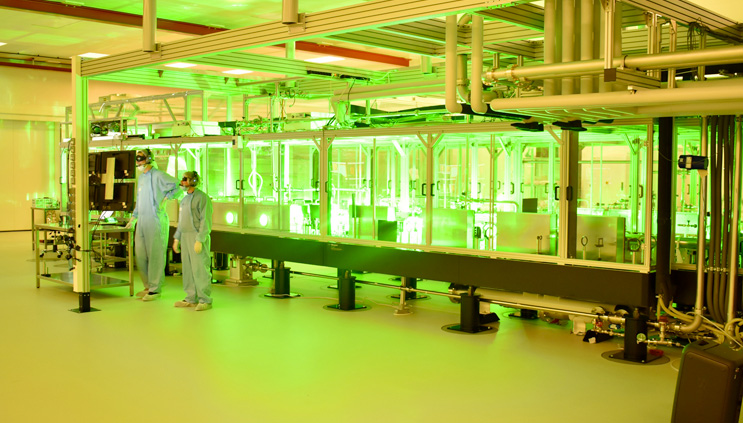 Underground nuclear testing was once the backbone of Lawrence Livermore’s stockpile stewardship mission. When the Comprehensive Nuclear-Test-Ban Treaty took effect in 1996, focus shifted toward evaluating the reactions that take place inside nuclear weapons using detailed computer simulations and powerful laser systems. NIF was a genuine game-changer for the scientists and engineers performing this work, as it allowed for the controlled study of materials at high-energy-density conditions similar to those inside nuclear weapons.

At NIF and other mid-scale laser facilities around the United States, how often the laser can shoot limits the number of experiments that can be performed. In a March 2020 article for Scientific American, Ma wrote that a good day in the lab 15 years ago might produce no more than eight data points. With a high repetition-rate extremely high-power laser in the DOE complex, in a single second, scientists would be able to produce large amounts of valuable data and perform more experiments. These experiments will increase the phase space of high-energy-density plasmas that can be explored and accelerate advancements in HED science. “The entire culture of photon science will have to be altered. The paradigm completely changes,” says Ma.

Around 20 years ago, science conducted with Livermore’s Nova petawatt or quadrillion watt laser set the stage for short-pulse laser experimentation around the world. In the intervening years, U.S. leadership in short-pulse, high-power laser capability slipped away, while Europe and Asia honed their expertise, deploying 80 to 90 percent of new high-intensity laser systems. With its APT program within NIF, Livermore continues to innovate and lead in the development of next-generation laser architectures with the potential to push petawatt-scale lasers beyond 10 Hz and even up to the kilohertz (kHz) rate (1,000 shots per second). “It’s important to think big. Enabling the next generation of HED science at 10s, 100s, and 1,000s of Hz repetition rates requires major advances in high-energy laser technology, and this really forms the core of APT’s mission,” says Tom Spinka, APT’s program element leader for laser development.

A Series of Feedback Loops

Making high-repetition-rate lasers a reality requires the simultaneous advancement of multiple experimental subsystems or competencies that exist at the Laboratory—one of the few places in the world where all the pieces of this puzzle come together. For example, now that high-power lasers can shoot at the Hz level, diagnostics must be able to collect data at that tempo, and the experimental facility must accommodate increased levels of debris, radiation, and electromagnetic pulses. Ma and her team have envisioned a fully integrated HED experiment infrastructure that capitalizes on high-repetition-rate lasers and a series of feedback loops to simultaneously accelerate both empirical discovery and computer model development. These loops would include a laser control loop, an experiment performance loop, and a modeling and simulation loop intricately integrated to provide intelligent experimentation. “These high-repetition-rate lasers are not going to unlock their full potential unless you have all the subsystems working in sync,” says Ma.

While many facilities focus on increasing the rate at which they can fire laser shots, the Livermore high-repetition-rate team is investigating how those shots will be most profitably distributed. Brian Spears, director of Livermore’s Cognitive Simulation Initiative, describes the selection of the next experiment as a central challenge. “Once you can take data on the hertz time scale, the real question becomes, ‘How do I avoid firing blindly? How do I choose the smartest experiment to execute when I only have 100 milliseconds to think about it?’ The integrated loops give us the framework for answering these questions.”

The Advanced Radiographic Capability (ARC, right) at the National Ignition Facility (NIF, left) is a “laser within a laser,” using four petawatt-class beams to utilize short-pulse techniques within NIF. Although the new short-pulse, high-intensity lasers coming online today are not yet the scale or energy of ARC, they are capable of firing at hertz rates or greater.

The laser control loop would monitor laser performance via machine learning (ML) trained with data from experiments and modeling, including the input–output of each amplifier and compressor, beam profile at places with high risk of optical damage, energy measurements, and control points for spectral shaping and seed energy variation. Using the predictions from ML, the laser control loop can reduce the impact of environmental perturbations on the output of the laser by adjusting various laser parameters to compensate. “Higher repetition rates actually benefit this type of prediction because the environmental conditions are less likely to change between shots. But we’re also dealing with variables that affect laser operation. Being able to train an algorithm to compensate for all of them will be a challenge,” says Tom Galvin, an APT staff scientist working on the laser control loop of the infrastructure. “This project removes bottlenecks in data processing and optimizes pulse parameters.”

The experimental performance loop will select targets at delivery speeds that will match the repetition rate of the laser with a closed feedback loop, allowing the system to navigate optimized target production, such as bright photon sources. New advances in additive manufacturing could mass produce complex targets “on-demand” to deliver targets designed to optimize outcomes. Derek Marsical, an HED scientist in APT, is working on the experimental performance loop and has been converting existing film-based diagnostic detector media to electronic media. “In general, passive media have worked well due to the extreme radiation and electromagnetic pulses generated and compatibility with typical shot rates. In less than one year, many of the workhorse diagnostics have been updated so they can accommodate the current generation of high shot rate lasers, and more are on the way,” says Marsical.

In the past, experimental design and analysis relied on time-consuming, human-operator dependent processes that were subject to individual bias, intuition, and error. “To truly have a high-repetition-rate diagnostic that can be integrated into a fully self-driving system, the system must be able to distill the data into quantities of interest on a time scale shorter than the experimental rate. Machine learning is ideal for this task and a neural network can be taught to accurately deduce these quantities by training on large sets of experimental and simulated data,” says Marsical. The modeling and simulation loop will use real-time, high-performance computing models coupled with contemporary artificial intelligence tools to assimilate observations from high-repetition-rate diagnostics to analyze multi-modal data in real-time, compare simulated predictions, and utilize inverse modeling where synthetic diagnostics enable the reconstruction of the full state of plasma from incomplete and noisy observations. This capability could give scientists access to experimentally constrained estimates of fundamentally unobservable quantities, like the internal electron distribution from a laser-accelerated particle beam experiment. 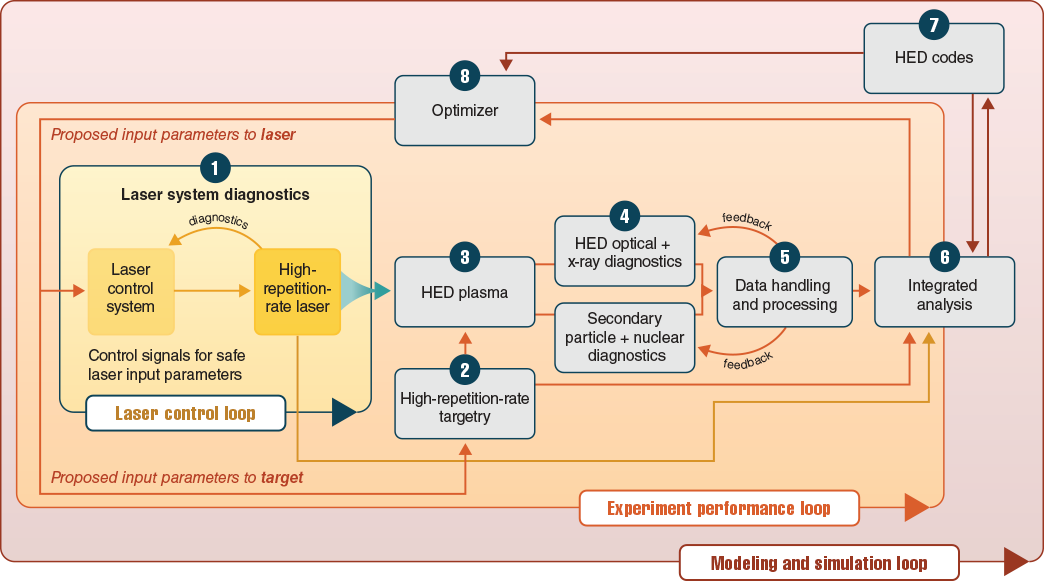 Lawrence Livermore’s core competencies provide the ideal environment for encouraging the development of a next-generation, short-pulse, high-power, high-repetition-rate laser system. Laser diagnostics help to preserve and improve the laser itself (1), new targets are built using advanced manufacturing techniques (2), high-energy-density (HED) plasmas are generated at the rate the laser fires (3), the shots produce experimental data recorded on a suite of diagnostics (4), that then feed into data handling and analysis (5 and 6). With the analysis provided from each experiment, researchers and engineers can improve codes and create models and simulations (7 and 8) in real time that can provide increased physics understanding and guide the next experiment.

With a high-repetition-rate, short-pulse, high-power laser, experiments can happen more often and more efficiently with tremendous flexibility in experimental design and execution. It offers a substantial number of potential scientific milestones in optics, advanced manufacturing, machine learning, and plasma physics. “Developing these systems requires that experimenters, modelers, and computer scientists learn each other’s languages. This more tightly integrated approach to problems will not only result in accelerated progress, but a wider and deeper understanding of the physics,” says Marsical.

“When we finally bring all the subsystems together, we’ll figure out our limitations,” says Ma. “Our current rate of learning is really only limited by how fast we can conduct and assess our experiments.” To target this challenge, a set of several projects funded by the Laboratory Directed Research and Development program and the Office of Science over the next few years will support the development of novel repetition-rate compatible diagnostics, accelerated cognitive simulations to advance high-energy-density physics, and the coupling of machine-learning techniques with streaming experimental data to create an automated system that continuously adapts and optimizes a laser-plasma experiment. These capabilities developed at Livermore will also be mapped to other Office of Science laser facilities.