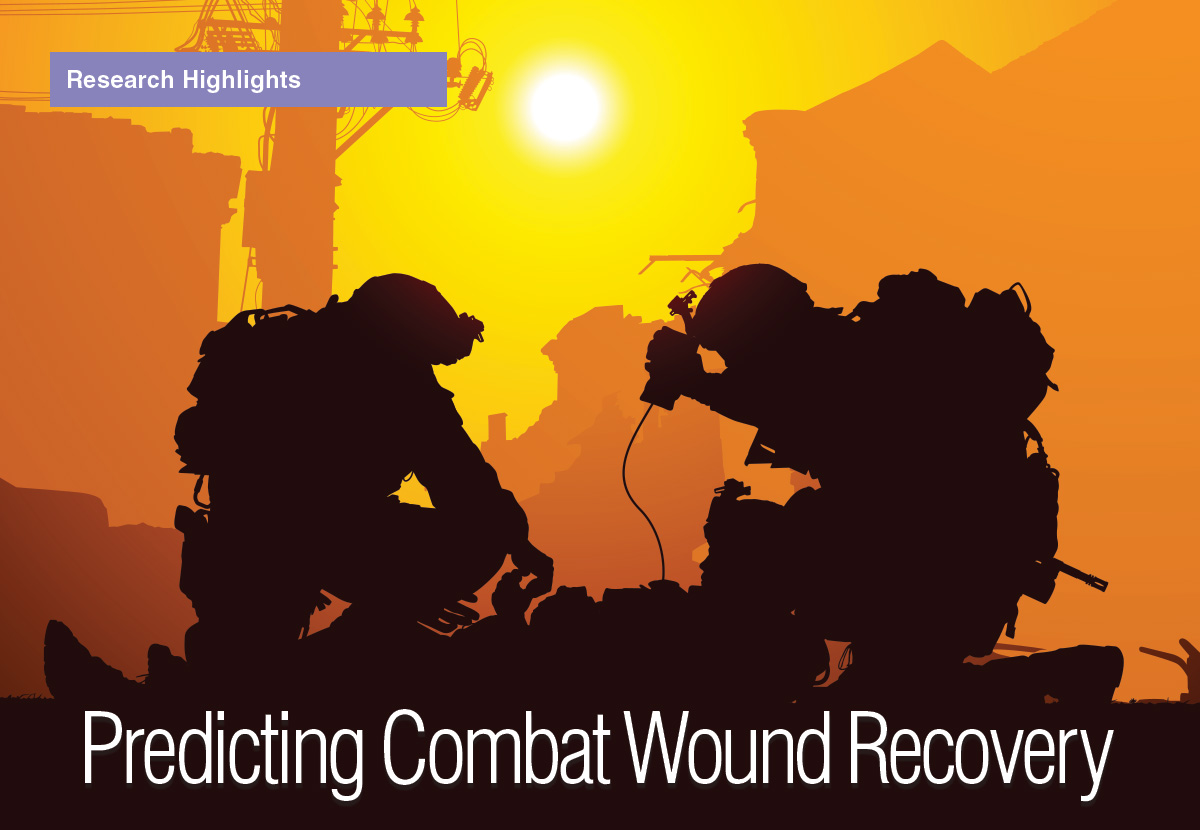 Recent advances in body armor and other battlefield damage control strategies have increased the proportion of survivable blast-related combat injuries. Over the last few decades, treatment of warfighters surviving increasingly severe injuries has created new challenges across the Department of Defense’s Military Health System. The nature and extent of trauma from improvised explosive device blast injuries and high-energy ballistics, including traumatic amputation and open fracture, are fundamentally distinct from civilian wounds such as a gunshot or soft tissue injury caused by a car accident, and push the limits of physiological recovery and existing technology to facilitate healing. Moreover, the extent and size of these wounds, with large surface areas of vulnerable open tissue, extended wound care procedures, and the presence of environmental contaminants embedded in tissue and bone, contribute to a high likelihood of microbial contamination, colonization, infection, and increased morbidity.

“In today’s combat environments, soldiers are surviving unthinkable injuries. Clinicians work hard to treat wounds our human bodies just haven’t evolved to handle,” says Nicholas Be, Livermore molecular biologist. Traditional, culture-based assessments of wound colonization underestimate the foreign microbes in a wound, but Be’s previous research suggested that having a healthy mixture of microbes could assist the healing process. (S&TR October/November 2015, Two-Part Microbial Detection.) “We thought, ‘What if we could help clinicians know the exact microbiome of a wound?’ Then they would be able to provide personalized, precision medicine that would remove clinical guesswork, save time, avoid unnecessary treatments, and hopefully save lives,” says Be.

To assist clinicians with critical guidance for wound infection care, Be and his team work with the Uniformed Services University (USU), the nation’s federal health professions academy dedicated to cutting-edge, military-relevant research. Together, they have leveraged a multidisciplinary approach, integrating experimental and computational analyses, to detect and identify genetic markers for virulence and antimicrobial resistance (AMR) in microbes, and to predict a wound’s likely healing outcome using machine learning and statistical analysis based on these genetic markers. 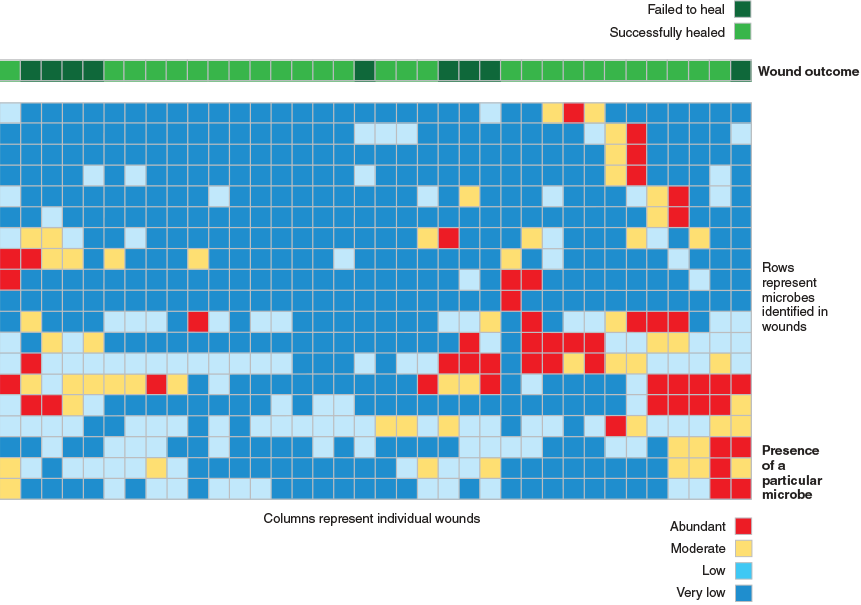 For the project, USU provided tissue and wound effluent samples from combat-injured patients, including wounds that successfully healed and those that did not. The samples were subjected to whole metagenome and targeted antimicrobial resistance gene sequencing, yielding a comprehensive portrait of the bioburden across the samples. “One of the challenges of this project,” says Be, “is identifying the sheer breadth of microbial species that could be present in a wound. We needed more than just taxonomic information. We also needed to know what those microbes are capable of doing. So, we focused on identifying the genetic markers that signal resistance to antibiotics, as well as virulence, meaning how likely the bacteria will successfully colonize and cause infection. Once we found the most common, relevant genetic sequences that indicate AMR and virulence, we could optimize the parameters for identifying those factors and, in essence, catch the most fish using the fewest lures.”

Nisha Mulakken, bioinformatics software engineer at Lawrence Livermore, designed the target enrichment panel and performed data analysis of the experiment’s results. “Before creating this gene panel, we only had a targeted amplicon sequencing panel containing primers for detecting AMR genes from bacteria,” says Mulakken. “The enrichment panel designed for this wound project contained an updated set of AMR genes from the Naval Research Laboratory as well as additional types of probes for organism detection and gene virulence.” To create the organism detection probes, Mulakken extracted about 11,900 fungal and bacterial probes from the Lawrence Livermore Microbial Detection Array and selected a subset based on organisms important to the project, such as hospital-acquired, or nosocomial, bacteria. To minimize the number of probes needed to detect about 3,000 virulence genes across 32 pathogens, she identified well-conserved regions common to all available sequences for each gene. 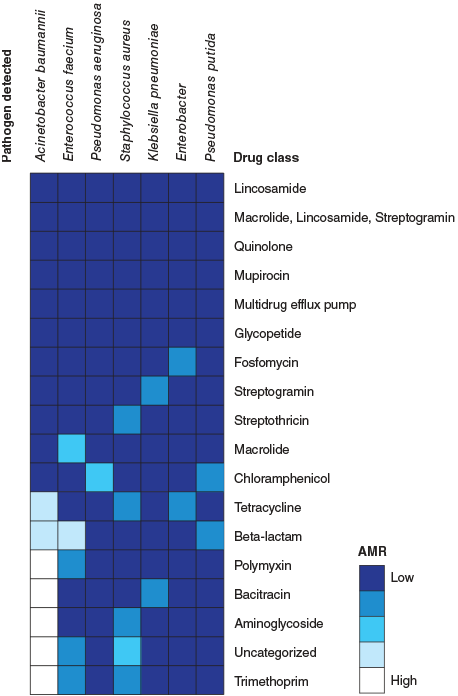 The results of the study’s logistic regression models indicate resistance to drug classes and detection of nosocomial pathogens. The lighter the box, the stronger the evidence for a correlation between the presence of antimicrobial resistance (AMR) and pathogen species abundance.

The small number of genetic samples for this project presented a paradoxical challenge for the Livermore scientists. “The project only included data from 56 patients, but we were also working with extremely high-dimensional data: patient immune biomarkers, inflammation, patient blood loss, wound size and location, treatments administered, and then synthesizing that clinical data with tens of thousands of microbial genomic data points,” says Mulakken. “The disadvantage of having too many variables is also the advantage of this project. Rarely are we able to look at so many different aspects of the patients’ health in one study. The fact that the patients were also all physically fit, in about the same age group, and living under the same conditions before getting injured, provides some semblance of controlled factors, and makes the project unique.”

Once the metagenomic and targeted functional identification had been performed, the first step in the data analysis was to reduce the number of variables by looking for highly correlated variables and selecting one variable per correlated group. “We began by identifying the bacteria and fungi in a wound and then determined which resistance genes were associated with a particular healing outcome based on the clinical data. That’s where machine learning comes in,” says Livermore chem-bio data engineer Aram Avila-Herrera, who provided exploratory data analysis for the project. The team used random decision forest analysis to get an idea of the important variables associated with healing results. They also grouped genes into higher-level classes, organizing antimicrobial genes according to the drugs they interfere with and virulence genes with mechanisms and pathways. “In an iterative feature selection process such as this, something important pops up early on,” says Mulakken. “Then you remove correlated features that don’t add insight, group genes by function, and down select important features.” The team used a battery of machine-learning approaches including logistic regression, neural networks, support vector machines, and penalized logistic regression to sift through and examine potential predictors such as the onset of pneumonia, infection, wound closure timing, blood clots, and abnormal bone growth. This created an overall characterization of the bioburden, clinical variables, and wound healing or failure across the samples that could be investigated for possible medical interventions to improve healing outcome.

“As with many projects using big data and data science, interpreting results and applying techniques to cut through the statistical noise common with biological data sets presented a challenge,” says Seth Schobel, scientific director for the Surgical Critical Care Initiative at USU and collaborator in the project. “We put together a team of experts who developed a set of methods to demonstrate the value of a targeted sequencing panel sensitive enough to detect the same types of microbes commonly seen in wound infections from cultures, but also capable of identifying antimicrobial resistance and virulence factors associated with wound healing. Lawrence Livermore has access to great computational resources unavailable to USU, as well as incredible expertise in microbial genomics, which helped drive this project forward.” 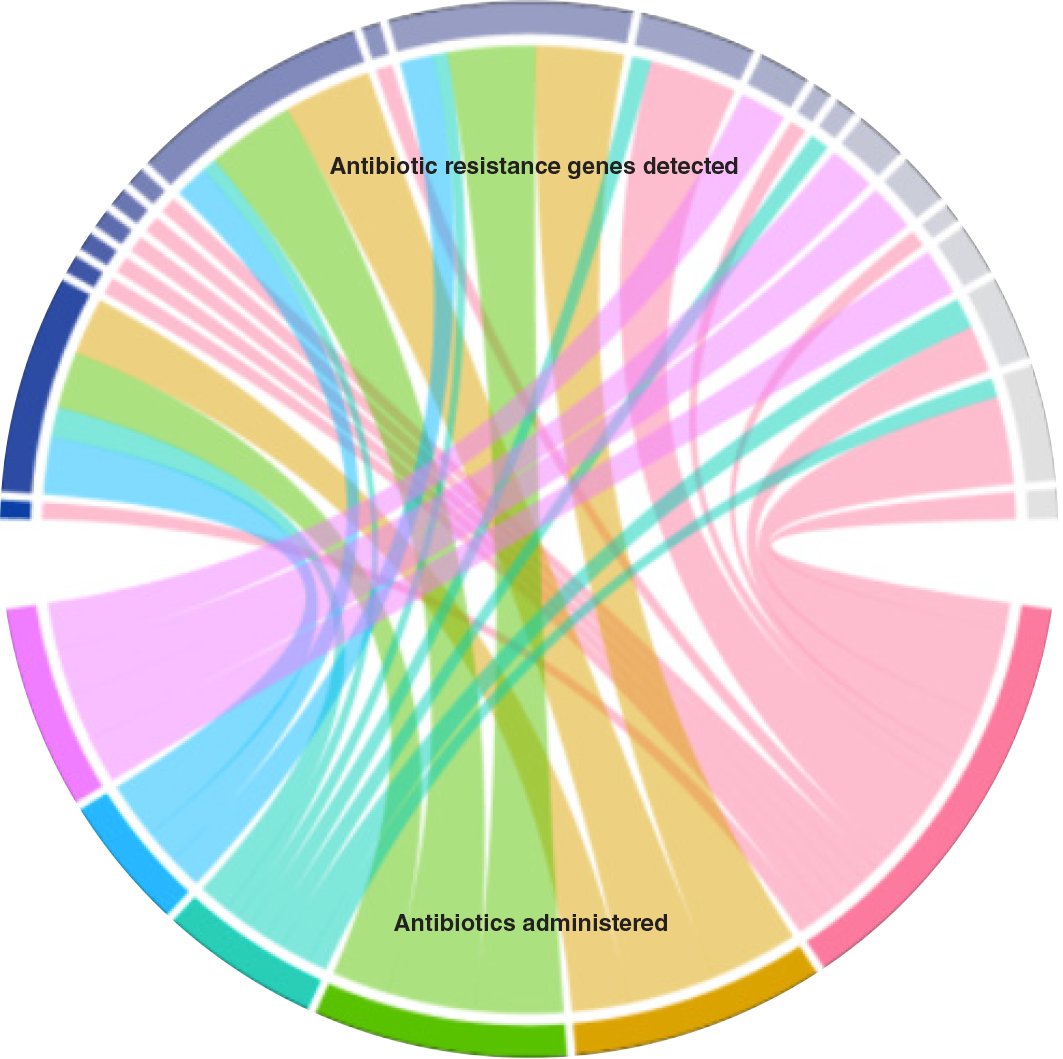 “We weren’t expecting to get as much information as we did,” says Be, “But given the depth of data we have, it’s a nice surprise.” The team’s analysis suggests that wound success or failure doesn’t come down to one common microbial profile. Adding a molecular microbial layer to the information typically collected for these wounds offers value, and using both microbial and non-microbial factors, the results of the study indicate that a majority of wound failures could potentially be predicted from these variables. The project uncovered patterns like the association of multiple genes conferring resistance to the same administered antibiotic in failed wounds. The team also observed distinctions across separate wounds at comparable progression points in the healing process, revealing that predictive values may shift over time.

The project is in the early, proof-of-concept stage due to its small sample size, but if the data is found to be representative in the next research stage, the project could lay the groundwork for a clinical diagnostic tool. The team hopes that their findings will motivate funding for larger studies to validate and further explore this potentially lifesaving work. “We’re working with a complicated data set,” says Be, “Biomedical data can be extremely difficult to harmonize. We hope to zoom in on a few key components and patterns and design specific experiments to see what holds up. Then we can understand what microbial factors trigger mechanisms relevant to wound healing or what microbial genetic signatures suggest that healing will be impeded.”