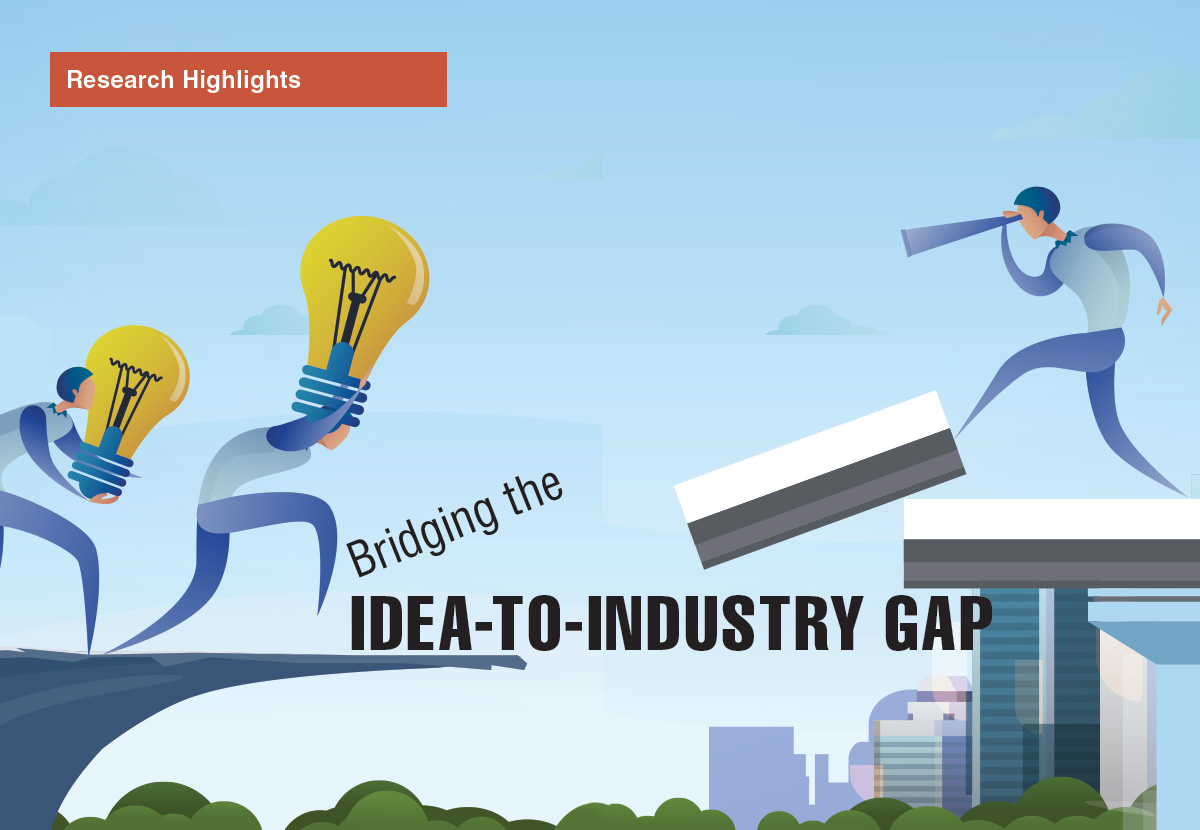 To this day, Lawrence Livermore continues to live up to its original mission as the “new ideas” laboratory. Ideas sparked at Livermore generate technologies for national security and publications about advancements in fields from biosciences to high-performance computing to manufacturing. Many Livermore ideas have commercial potential as well. With investment, they can be developed into products that benefit consumers, industry, and the U.S. economy.

Ideas are not in short supply, but funding for Department of Energy (DOE) national laboratory research often ends when a new scientific principle is proven experimentally. Industry partners and startups with the capacity to move technologies into the marketplace seek a high level of proof that an invention has commercial potential. As a result, efforts to connect a promising early-stage technology with a capable commercial partner often stop at the steep edge of the laboratory-to-market resource gap.

Money for additional development, such as building a full-size prototype or testing across a range of operating conditions, has not been easy to obtain. “Technology maturation funding has long been the bane of technology transfer at national laboratories,” says Rich Rankin, Director of Livermore’s Innovation and Partnerships Office (IPO).

DOE, recognizing the need to bridge the gap between national laboratory research and industry investment, created the Technology Commercialization Fund (TCF). Unlike funding for basic science research, the TCF supports projects that demonstrate the potential of energy-related technologies to successfully reach the marketplace. DOE dedicates 0.9 percent of its applied energy research, development, demonstration, and commercial application budget each fiscal year to support the program, which is managed by its Office of Technology Transition.

In six funding rounds, from 2016 through 2021, the TCF program has awarded more than $140 million to 399 projects across the national laboratory complex. The 29 projects awarded at Livermore include energy harvesting products, grid security systems, batteries, advanced manufacturing, and carbon capture technologies, among others. “The energy space may not seem like our primary focus, but applied-energy applications touch on many aspects of Livermore research such as materials and networked systems, in addition to fossil fuels and nuclear energy,” says Rankin.

The TCF Program funds projects at two levels. Topic Area One projects, lasting 6 to 18 months, receive up to $250,000 for technology maturation specifically designed to attract an industry partner. Topic Area Two projects receive up to $1.5 million for a one- to three-year collaborative project with an industry partner. These longer-term, joint research and development efforts further boost a laboratory-developed technology’s chance to reach commercial users.

Rankin stresses that the groundwork for a commercial partnership takes time to build. “Seeking a partner willing to commit $1.5 million right before proposals are due is not a good idea,” says Rankin. “The first step is to develop a relationship with the IPO BDE working in the researcher’s area of expertise.”

BDEs build industry contacts for their technology portfolios by attending conferences and regional development forums, hosting company visits, and leveraging relationships with investors and research institutions such as the University of California and Stanford. “Commercialization is a contact sport,” says Rankin. “Interactions with industry are what lead to the next big thing.” 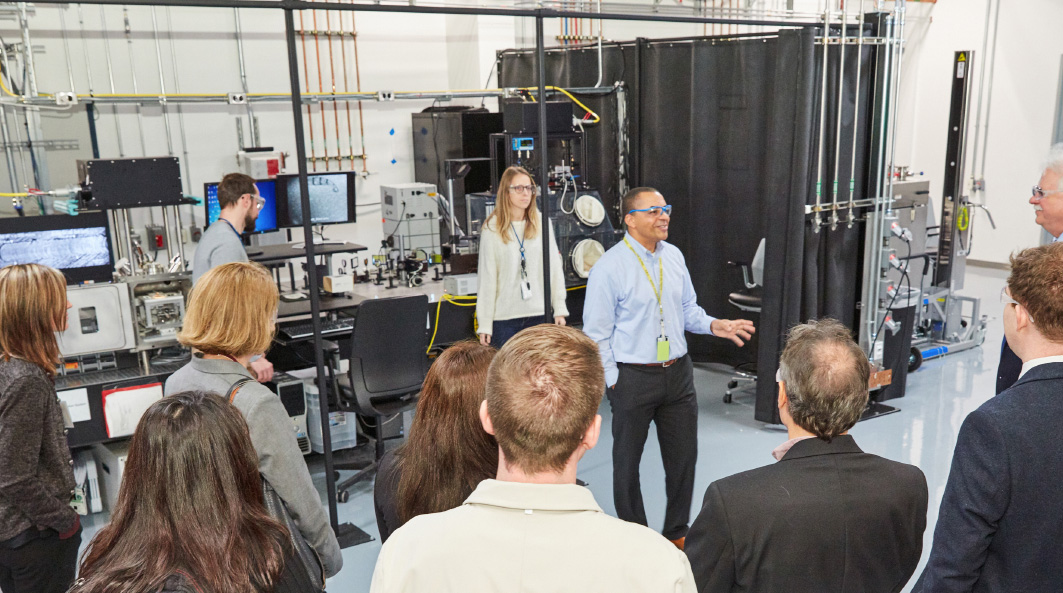 During a tour of Livermore’s Advanced Manufacturing Laboratory (AML), Materials Science Division leader Manyalibo ”Ibo” Matthews (center) highlighted collaborative research conducted at the AML, such as a partnership with GE Global Research to explore new metal additive manufacturing processes. GE-supplied machines used in the project are now available for future research by Livermore and its partners.

In addition to paving the lab-to-market path for national laboratory technologies, the TCF Program forges partnerships between national laboratories and industry. “Many researchers are intrigued by the possibility of commercializing their research,” says Elsie Quaite-Randall, IPO’s deputy director. “The TCF Program helps scientists learn about what industry is doing, commercially, in their area of research. This adds to scientists’ sense of satisfaction in their work.” 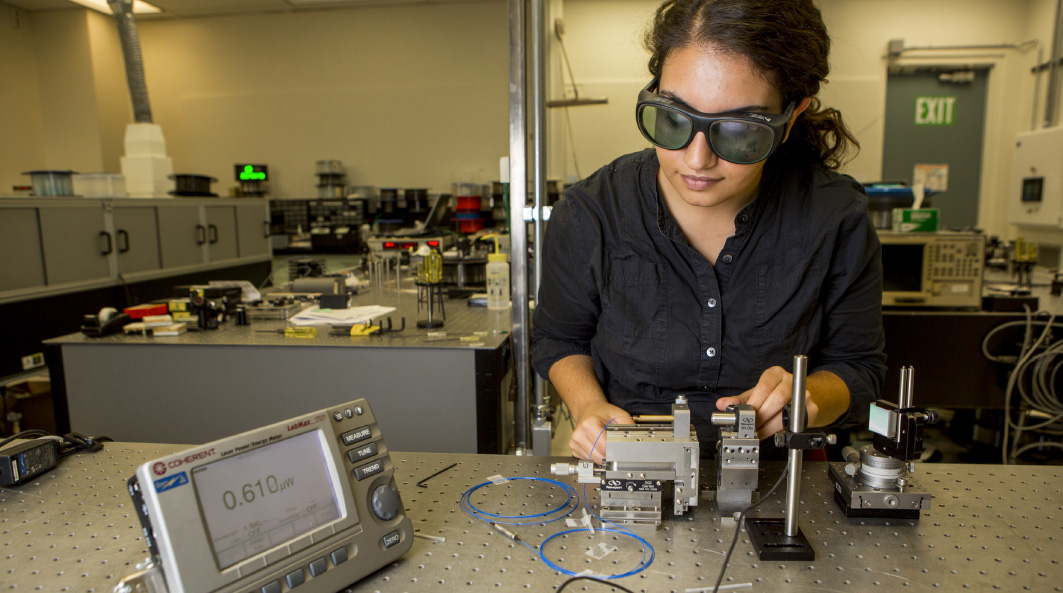 Leily Kiani’s work focuses on increasing the capacity of fiber-optic cables with the help of the Department of Energy’s Technology Commercialization Fund.

Although smaller in scale, Topic Area One projects can help Laboratory-developed inventions make significant progress towards commercialization. Livermore researcher Leily Kiani, a physicist in the NIF and Photon Science Principal Directorate, has championed a neodymium-doped fiber amplifier that could double the capacity of information-carrying fiber-optic cables. This would improve internet bandwidth, an important proposition given the growing dependence on internet connectivity for work, school, and personal interactions. The amplifier research, initially funded by Livermore’s Laboratory Directed Research and Development program, identified the potential for optical fibers to operate in a different transmission region, called the E-band, and double their information-carrying power.

To build on the technology’s basic research, IPO awarded Kiani an Innovation Development Fund (IDF) grant. IPO’s competitive IDF grant provides between $35,000 and $150,000 to develop technologies with commercial potential. With this boost, the fiber group reached the proof-of-concept stage, making their work more attractive for a TCF award. Kiani successfully applied for a Topic Area One TCF award and received $150,000 for a one-year project to develop a prototype fully compatible with existing telecommunication architectures. “The TCF has been critical for us to demonstrate viability for a commercial product based on E-band amplifier technology,” says Kiani. “Building a module with the features and performance that match conventional C-band amplifiers shows the technology can be taken out of the lab for real communications.”

Entrepreneurial training from the National Lab Entrepreneurship Academy, managed by Livermore’s IPO, has helped the researcher hone her pitch to potential investors. Telecom company input has informed Kiani’s next stage of development—additional amplifying-fiber improvements to match commercial expectations. “IPO worked with our group to make invaluable connections to potential industrial partners, strengthen our proposals, and secure training in commercialization and entrepreneurship,” says Kiani. “That support will pay dividends when we present a clear picture of the commercialization path to new contacts.”

For the latest round of TCF awards announced in June 2021, five Livermore projects received a total of more than $3 million in federal funding. “The program is about more than money,” says Rankin. “The TCF advances DOE’s goal to benefit society and the U.S. economy in a real way by improving our technologies’ chances to reach the marketplace and by building long-term, mutually beneficial relationships with industry.”