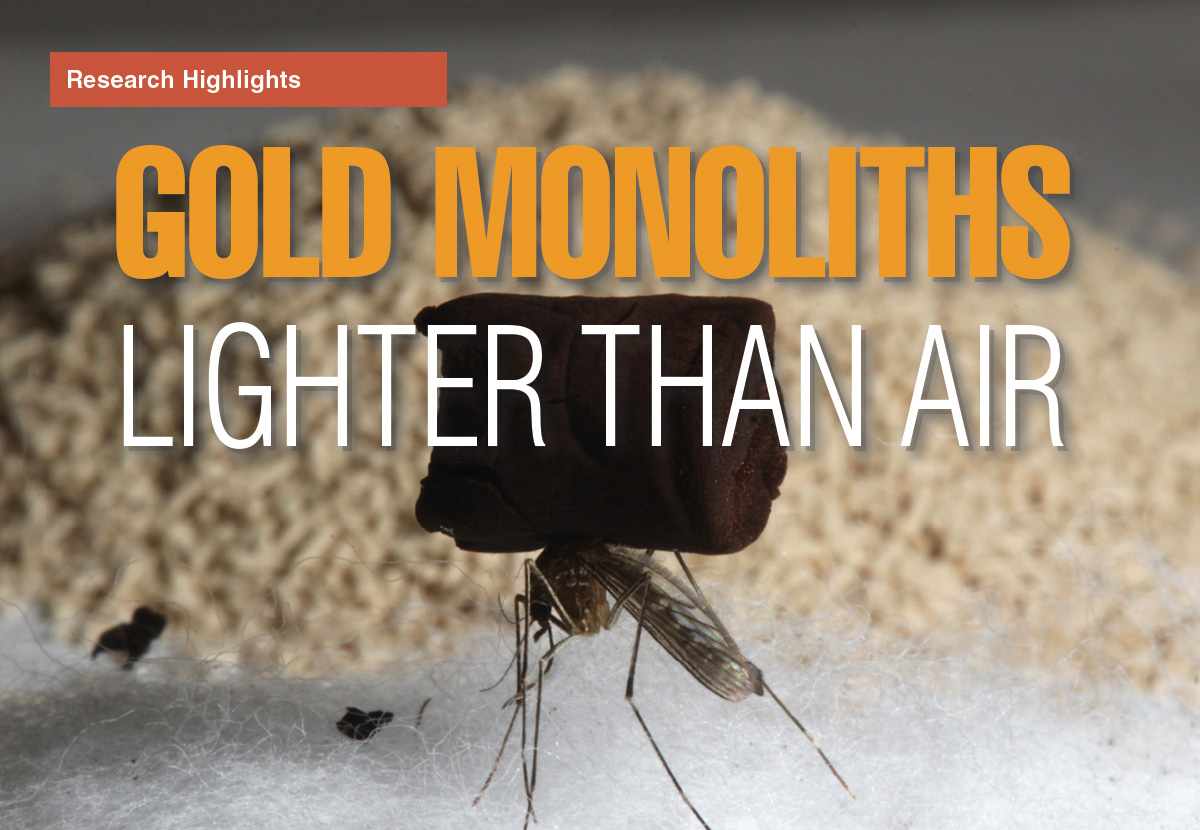 A mosquito standing on cotton fibers carries a sample of the Livermore team’s ultra-low-density gold aerogel, which is literally lighter than air. (Photo by Joshua DeOtte.)

Gold, that dense but soft metal, is more than a raw material for making jewelry. One of the least chemically reactive and most malleable of the noble metals, gold’s high electrical conductivity makes it ideal for applications in electronics, medicine, and scientific research.

Over the last decade, Livermore materials engineers working at the nanoscale have uncovered techniques for generating metal aerogels: a unique, emergent class of lightweight, low-density, super-porous but durable materials that present huge potential advances for scientific research and industrial applications. Now, a team of Livermore researchers has given gold a new incarnation as an aerogel “foam” that is literally lighter than air. 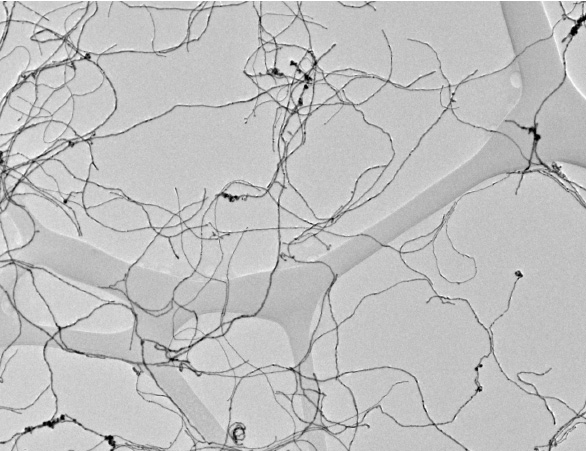 Lawrence Livermore scientists have fabricated gold aerogels with incredibly low density, with strong, spaghetti-like threads called nanowires forming a lattice throughout the material. Each nanowire is approximately a thousand times thinner than a human hair.

Researchers have developed experimental metal aerogels of nickel, cobalt, copper, and silver in order to initiate, facilitate, and speed up chemical reactions, as well as assist in filtration. With their high mechanical rigidity, they can also serve as microscopic support structures for enzymes and other proteins embedded within their micrometer-scale pores as they react to other biomolecules. As scientists have realized the significant advances these aerogel metals present, researchers at Lawrence Livermore and around the world have been competing to uncover an efficient and inexpensive method to produce large quantities of these aerogels—while still predictably controlling their nanoscale architecture, surface area, and pore size.

To create the first aerogels, researchers used “sol-gel” chemistry: a process that synthesizes solids from a colloidal suspension by converting molecular precursors into nanometer-sized particles that link up, forming a spaghetti-like three-dimensional liquid-filled network. Freeze-drying removes the liquid, leaving behind a porous low-density aerogel that looks like a stale marshmallow, but is referred to as a “monolith.” The sol-gel method, however, did not produce the robust, high- quality ultralight monoliths the researchers needed. A radically new approach was required.

In 2016, a Laboratory team led by materials scientist Fang Qian reported a simple method for growing and purifying copper nanowires. “The research problem was how to purify these materials at a large-enough scale to manufacture nanofoams,” says Qian. As the building blocks of metal aerogel, nanowires need to be produced in large enough batches to serve as raw material for producing monoliths of aerogel. Nanowires are typically on the order of 20 to 30 micrometers (μm, millionths of a meter) long and just 20 to 30 nanometers (nm) in diameter—about a thousand times thinner than a strand of human hair. Once the purity and quantity riddle was solved, another Lawrence Livermore team developed a method of forming low-density copper nanofoams that same year. And in 2018, a Laboratory team announced the development of a method for fabricating ultra-low-density (less than 10 mg/cm3) monolithic silver aerogels.

Gold, however, was the most difficult of noble metals to fabricate into an ultralight aerogel. By bringing together an interdisciplinary team from Lawrence Livermore that included experts in freezing physics, organic and inorganic chemistry, surface science, and nanoscale materials characterization, ultralight gold aerogel finally materialized. The team’s pioneering fabrication method combined chemical techniques with industrial freeze-drying and freeze-casting. “Gold foam has been made before, but nowhere near the low density, high purity, and controlled pore geometries of ours,” says Livermore materials scientist and principal investigator Michael Bagge-Hansen. “Our recipe is totally unique.” 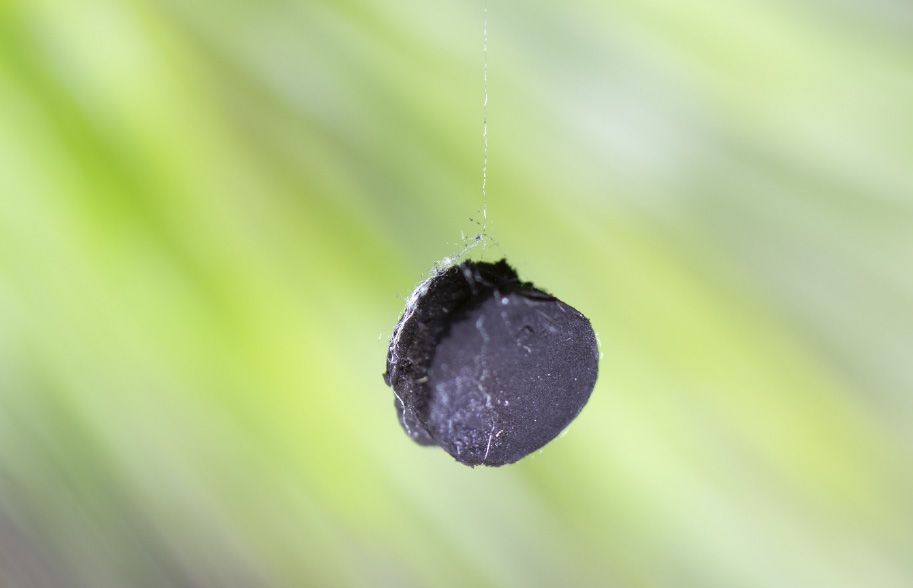 A sample of a gold aerogel hangs from a single thread of spider silk, illustrating its unusually low mass. (Photo by Joshua DeOtte.)

The method begins with immersing negatively charged gold nanoparticles (AuNPs), and positively charged silicon wafers in a solution. The silicon wafers’ positive charges attract the AuNPs, which uniformly coat the surface of the wafers, creating seed sites. AuNP atoms then deposit only at the seed sites, growing roughly perpendicular to the wafer into nanowires with the same length and diameter. The researchers then detach the gold nanowires from the wafers using ultrasonication or soundwaves. The result is a black liquid filled with gold nanowires.

Then, researchers use liquid nitrogen to freeze the gold nanowire suspension. “The ice crystals form and enlarge as the freezing starts,” says Qian. “As they do, they push the nanowires into networks of pores, creating a highly uniform pore structure.” As the solution vaporizes or sublimes away during the freeze-drying phase, it leaves behind a self-supporting network of gold nanowires that form the aerogel.

“By varying the concentration of nanowires in the suspension, we can fine-tune or custom-design the density of gold aerogel,” says Bagge-Hansen. “We’ve achieved a range of densities, from 6 to 23 mg/cm.” To control pore size, the team has several tools. They vary the speed of freezing: faster freezing results in smaller pores; slower freezing yields larger pores. They can also change the solvent liquid, and add inactive substances known as “excipients” that alter the freezing properties of the solvent without becoming part of the aerogel, so the purity of the aerogel remains high. Adding an excipient called tert-Butanol (tBA) to the suspension creates dramatically smaller ice crystals of uniform size.

The lowest gold foam density the team achieved is 6 mg/cm3, or only 0.03 percent density, relative to full-density gold—19.32 g/ cm3. The foam’s atomic density is 1.8 × 1019 atoms/cm3, lower than the atomic density of air (2.7 × 1019 atoms/cm3) at room temperature and atmospheric pressure. “Producing millimeter-scale gold aerogels at this low density was quite unexpected and underscores the opportunities presented by freeze-casting metal nanowire solutions,” says Bagge-Hansen. “It adds another capability to our toolbox.” The final product looks nothing like lustrous gold, because its physical properties metamorphize as the size of the gold particles approach the nanoscale. “A gold nanoparticle solution changes colors from purple to green to red as the nanoparticles’ size and aspect ratio change,” says Qian. “The nanowires have a unique structure that changes their light-scattering properties, ultimately giving the aerogel its black hue.” 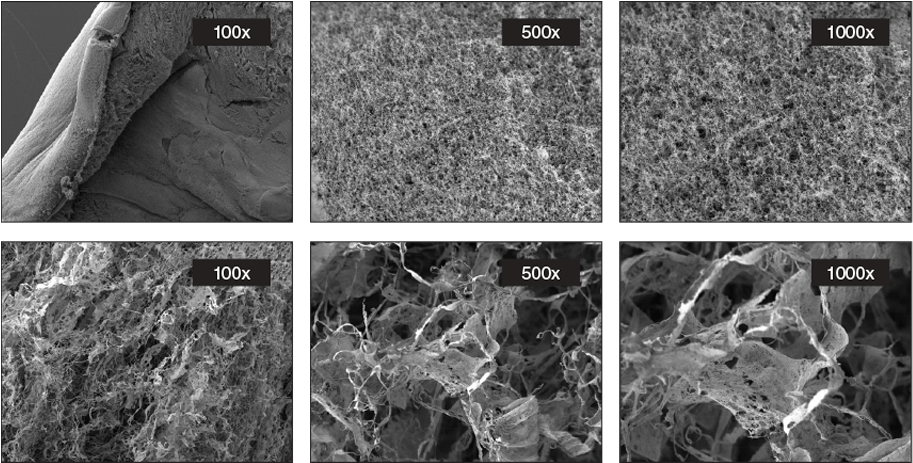 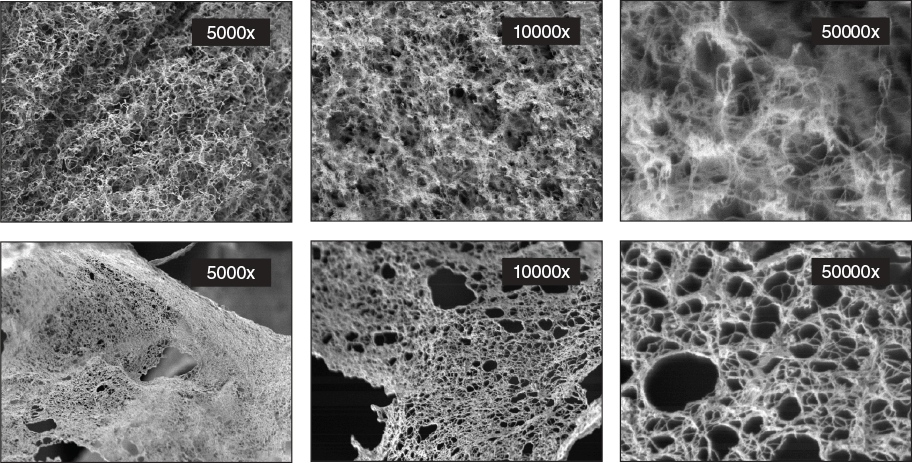 Electron microscope images at different magnifications of gold aerogel generated from nanowires suspended in a water-based solution. Gold aerogel was generated in a mixture of water and tert-Butanol (tBA) (top row). It shows a more uniform pore size than those grown without tBA (bottom row).

Initial samples of the ultralight gold aerogel had a frustrating tendency to fall apart or drift away with the slightest breath or change in air current, which presented a legitimate challenge. Eventually, the team determined how to create an aerogel that stays in place on the target when the laser burst hits. “These (next-generation) gold foams are mechanically stable, compared to early samples that were similar in strength to a long cigarette ash,” said Brent Blue, the National Security Applications program manager. “They can be squeezed or dropped, and they bounce back and hold their shape very well, which is a critical quality for use as a bright x-ray source. This is an amazing feat given that, even though they look solid, they are 99.9 percent void, or 0.1 percent solid.”

Now, the research team has turned their focus to developing new methods for transforming any metal into an aerogel. “We’ve been working on tin for a while,” says Bagge-Hansen. “Making tin into nanowires and aerogels is a huge challenge. Its chemistry is so different from gold. The process will be even more difficult as we move from tin into the other transition metals of the periodic table.” The team has had discussions with potential private-sector partners to further explore industrial uses of metal aerogels. For all their insubstantiality, these mini metal monoliths stand to become bona fide heavyweights in scientific research and industrial materials of the future.