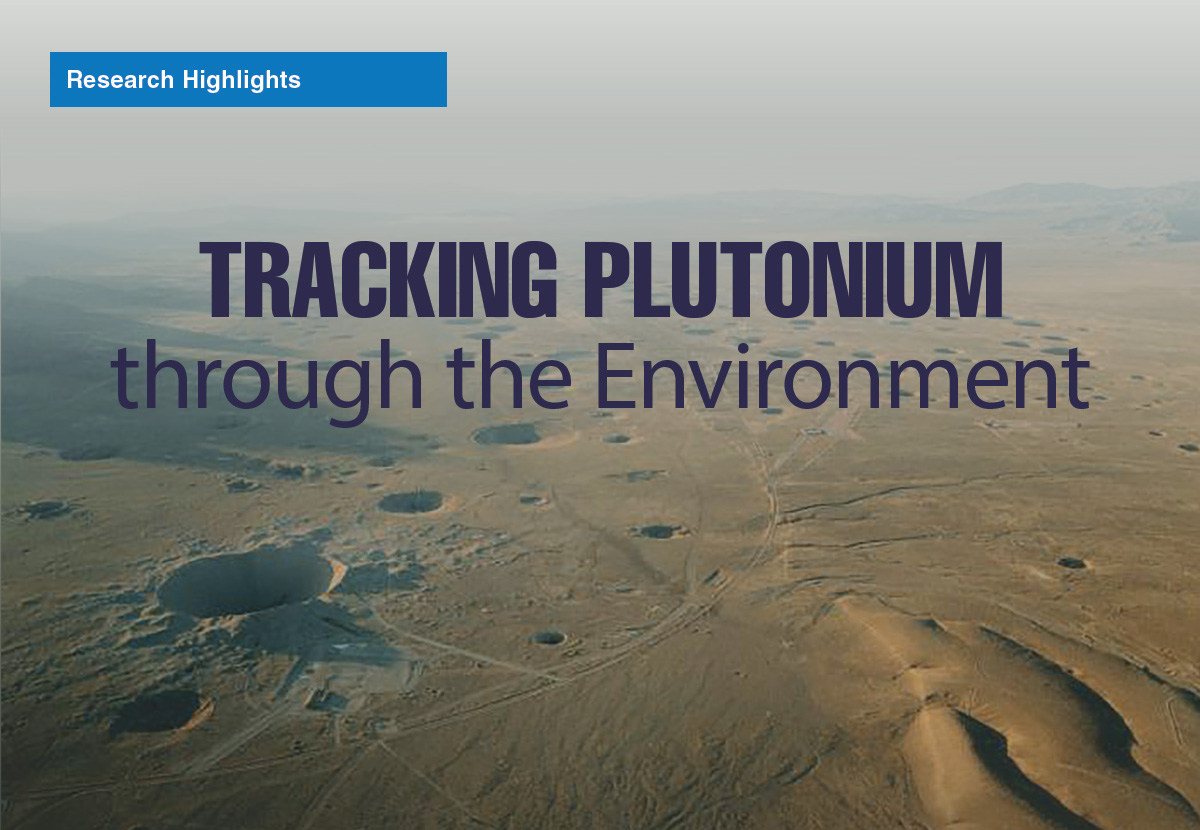 Roughly half of worldwide nuclear detonations took place during the era of nuclear testing at the Nevada National Security Site (NNSS), formerly called the Nevada Test Site. Approximately 2,775 kilograms of plutonium are dispersed underground at the NNSS.

Tracking Plutonium through the Environment

PRIOR to World War II’s Manhattan Project, plutonium existed naturally only in trace amounts on Earth. Today, the worldwide inventory of this element, a component of nuclear weapons and a byproduct of fission reactors, is estimated at 2,850 metric tons. About one percent of this amount has been released into the environment. Some of the released plutonium has been deposited underground at nuclear test sites around the world, where weapons were detonated during the nuclear testing era. Plutonium also resides at sites of reactor accidents such as Chernobyl and Fukushima, in accidental releases from nuclear waste reprocessing facilities, and in radioactive waste dumping from the early nuclear era.

The transport and fate of plutonium in the environment is an ongoing concern. Will it stay confined to the immediate surroundings of contaminated areas? Or does plutonium move? If so, how far, how fast, and at what concentration? Researchers at Lawrence Livermore’s Glenn T. Seaborg Institute have been studying these questions for more than 20 years and have developed insights into the natural biogeochemical processes governing plutonium’s migration.

Plutonium sits in the lowest row of the periodic table, home of the actinide elements, the heaviest and most persistent elements in the universe discovered to date. Plutonium is both highly toxic and long-lived, therefore needing to be safely isolated from the biosphere. For example, plutonium-239 has a half-life of 24,100 years, so it will be present in the environment for millions of years.

Commercial nuclear reactors produce some 70 metric tons of plutonium per year as nuclear waste and, along with the plutonium from the U.S. nuclear legacy, serves as motivation for ongoing research. “As a National Nuclear Security Administration (NNSA) laboratory, we have a knowledge of the inventories and chemistry of actinides in the environment, and we have always been at the forefront of monitoring actinide concentrations for NNSA programs in nuclear safeguards and nonproliferation,” says Mavrik Zavarin, director of the Seaborg Institute. Zavarin is also principal investigator on a Department of Energy (DOE) Office of Science Biological and Environmental Research Program studying the behavior of plutonium in the environment. The Institute has engaged over a ten-year effort to identify and quantify the biogeochemical processes and underlying mechanisms that control mobility of plutonium and other actinide elements to reliably predict the cycling and migration of actinides in the environment. Seaborg Institute staff conduct collaborative research with universities and encourage students and postdocs to develop careers in actinide environmental chemistry. 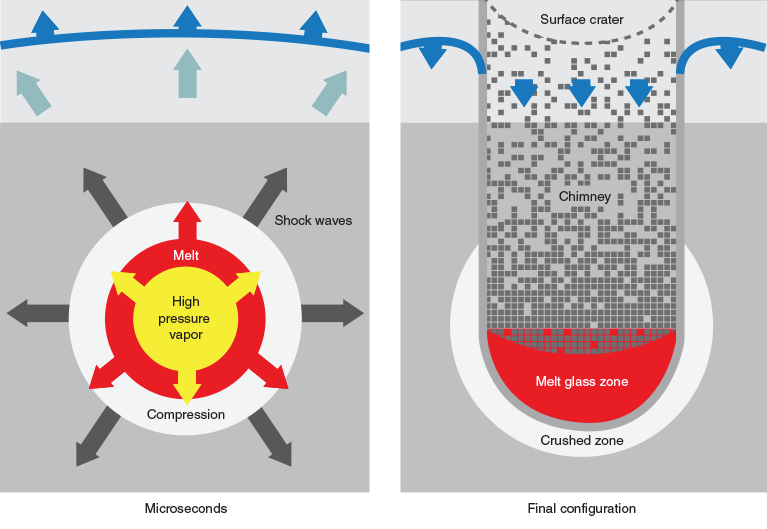 Schematic of a nuclear test and the subsequent formation of nuclear melt glass.

In 1998, Annie Kersting, former director of the Seaborg Institute, now Livermore’s director of University Relations and Science Education, analyzed contaminated groundwater collected downgradient from a nuclear test at the Nevada National Security Site (NNSS, formerly the Nevada Test Site). Kersting’s research team found low levels of plutonium and associated isotopic ratios that uniquely matched a test 1.3 kilometers from the contaminated well. During a detonation, residual plutonium is thought to be trapped in melt glass that forms when the heat of the explosion vaporizes surrounding material that then solidifies into a glass. As a result, actinides such as plutonium were thought to remain isolated from the environment. Kersting’s work was the first documented proof that plutonium can migrate significant distances and associates with small, naturally occurring particles, called colloids, in the groundwater. The results surprised scientists in the field. “Everyone had thought plutonium was relatively immobile,” says Kersting. “It has low solubility in ambient groundwater and sticks strongly to minerals and organic material of the host environment.” Other research groups working in contaminated locations worldwide have now confirmed the plutonium transport phenomenon under varying biogeochemical conditions. Colloid-facilitated transport is now accepted as an important mechanism that allows plutonium to migrate in the environment. The NNSS effort was supported by the long-standing LLNL Underground Test Area program, currently led by Andy Tompson, focused on the fate of radionuclides from underground nuclear testing at NNSS.

In recent years, Seaborg Institute staff have focused on understanding the biogeochemical mechanisms that associate plutonium with colloid surfaces, whether mineral, organic, or microbial, as well as identifying the conditions of potential mobility under different hydrologic and geologic environments. The figure below shows several possible mechanisms the team has investigated using a combined field, laboratory, and modeling approach. 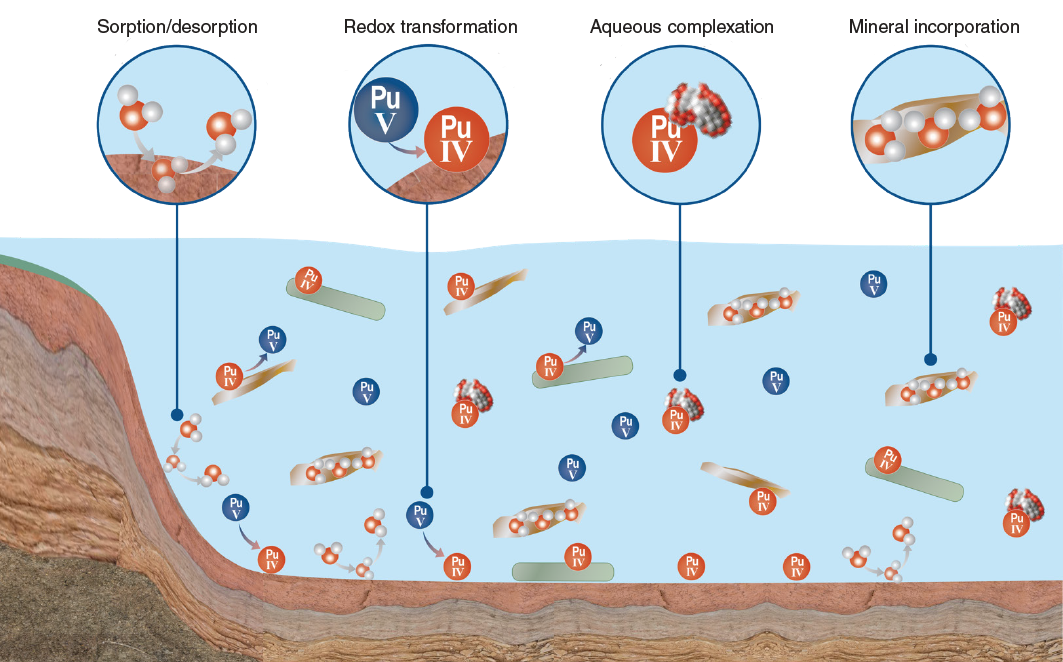 At least four processes govern how plutonium interacts with its environment (from left): its sorption to and desorption from micron-size particles in the water; its chemical transformation between more and less mobile chemical species; its ability to form complexes with other species dissolved in water, including organic molecules; and its tendency to be incorporated into minerals that have broken down through the action of high-temperature geothermal fluids. Many of these processes may be mediated, directly and indirectly, by microbial activity.

In recent years, the Seaborg Institute research team has been exploring the mechanisms by which plutonium can adsorb (attach) to and desorb from common minerals such as clays and iron oxides. In specialized flow-cell reactors, researchers pumped water with different concentrations of plutonium into cells containing clay colloids and monitored the rates of reaction between plutonium and the colloids. These experiments showed that plutonium will desorb from colloid particles over a timescale of years to decades. The research helped resolve key issues that have frustrated the DOE’s Underground Test Area Environmental Management project at the NNSS.

In addition to plutonium adsorption–desorption, plutonium forms chemical complexes with large organic molecules in water through aqueous complexation. Results of a 2016 Seaborg Institute study showed that a strain of Pseudomonas bacteria isolated from well water at the NNSS can generate a complex residue of organic material called extracellular polymeric substances that can react chemically with and adsorb plutonium.

Seaborg Institute researchers also investigated direct incorporation of plutonium into minerals. In research published in 2019, Zavarin and colleagues studied how hot hydrothermal fluids can alter nuclear melt glass at NNSS by placing samples of nuclear melt glass into pressure vessels with hydrothermal fluids heated to 25°, 80°, 140°, and 200°C for up to three years to study long-term colloid formation. Follow-on experiments led by Enrica Balboni, a geochemist who began as a postdoc with the institute and is now a staff scientist, demonstrated that in the 140°C samples, plutonium desorption rates matched previously measured colloid desorption rates, suggesting that simple adsorption–desorption could be the mechanism. However, in the 200°C samples, the desorption rates were significantly slower. This suggests that plutonium may be incorporated into the mineral structure as the colloids form and, as a result, be transported much farther in the environment. 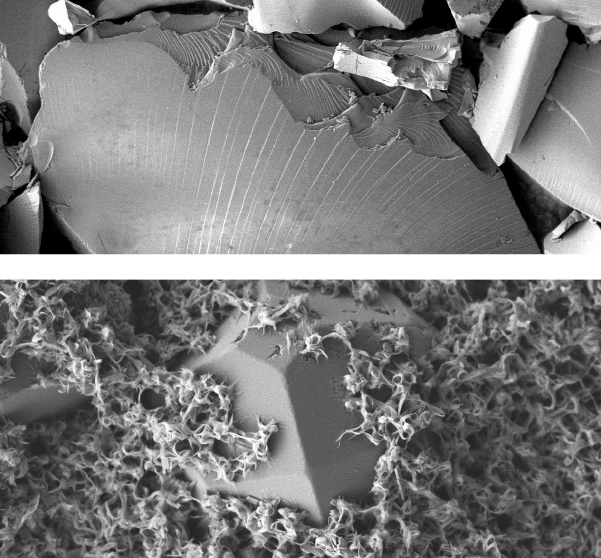 A complex picture of interrelated processes governing plutonium’s disposition is emerging. “How do we grapple with these multiple mechanisms and long timescales in a lab setting?” asks Zavarin. “One way is to rely on field observations where contaminated sources have evolved over decades.” Extending the research to additional field sites with longer timescales is a current focus of the institute.

Seaborg Institute researchers are heading to new field sites. Balboni is working on a project at the Ravenglass Estuary on the Irish Sea, near the U.K.’s Sellafield nuclear site. Samples will provide insights into how plutonium and other radionuclides interact with their environment in coastal wetland sediments, a very different environment from that of the NNSS. “We’re going to new sites to apply what we’ve learned in the lab and look at plutonium’s behavior at various field conditions and longer timescales—years instead of weeks to months,” she says.

Postdoc Nancy Merino studies plutonium migration and its association with microbes at the DOE’s Savannah River site in South Carolina. She observes, “With an element as complex as plutonium in the environment, you must expect that many factors will affect its mobility.” The next generation of actinide scientists in Livermore’s Seaborg Institute are leading the effort to untangle its complex behavior and persistence in nature.