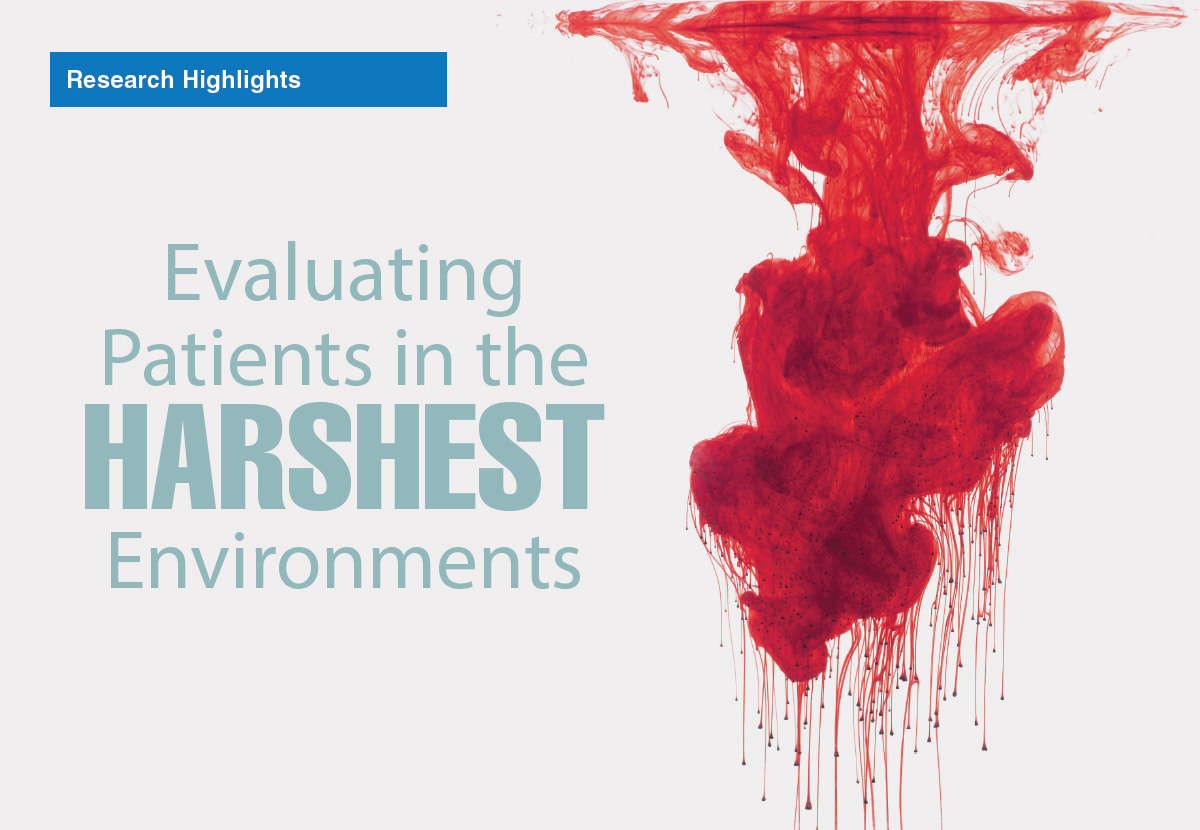 Evaluating Patients in the Harshest Environments

As NASA prepares to send astronauts beyond low-Earth orbit for the first time since 1972, scientists are working to better understand and mitigate the potential health risks associated with long-distance space travel. Rapid medical diagnosis will help ensure astronauts stay healthy and productive. To that end, Lawrence Livermore and NASA researchers, with colleagues from Uniformed Services University; University of Arizona; Michigan State University; the University of California at Davis; Sandia National Laboratories; and Travis Air Force Base, are developing a hand-held diagnostic instrument that can rapidly evaluate the effects of radiation exposure, weightlessness, and other astronaut health concerns.

David Loftus, medical officer for the Space Biosciences Research Branch at NASA’s Ames Research Center and Lawrence Livermore collaborator, notes, “The International Space Station (ISS) is close enough to Earth that it’s easy to bring people back if they get sick, so we don’t need to do much health monitoring, but we will need monitoring devices for missions to the Moon, Mars, and beyond.” While a rescue from ISS can be executed within a day, Mars is eight months away, and travelers will need to be equipped to manage on their own.

This work was supported by Livermore’s Laboratory Directed Research and Development Program and builds on Laboratory strengths in radiation effects research, additive manufacturing, and bioengineering along with NASA Ames expertise in astronaut health research and nanotechnology. Researchers ultimately envision the low-cost, easy-to-use, accurate, and robust tool’s use in other austere environments as well, such as disaster sites, developing countries with limited medical resources, and on the battlefield.

Biomarker targets developed at Lawrence Livermore will be used as part of the microarray panel for blood plasma analysis.

Taking It for a Spin

Flexibility is central to the device’s design. While “blood is the gold standard for understanding a person’s health,” according to Livermore bioengineer Erik Mukerjee, volunteering a breath sample is simpler and less invasive, so this tool will be engineered to harvest data from either or both sources. Further, while the team’s initial focus for blood analysis has been establishing a capability for identifying radiation exposure biomarkers—building on previous Laboratory efforts to characterize biomarkers that could inform and improve radiation-based cancer treatment—the device could be used to search for almost any set of biomarkers. (Biomarkers are any measurable biological characteristics that provide information about current or future health status.)

Hampered by stringent limitations on power usage and instrument size and weight, most medical diagnostics intended for extreme environments focus on identifying a single biomarker. This device could thus be among the first multifunctional health diagnostic tools used in space. The team’s innovative spinning cartridge design for blood and saliva analysis is mechanically simple, robust, and has modest power requirements, as it uses only centrifugal force to manipulate fluid. “Typically, such devices will have pumps and valves—two types of mechanical parts,” explains Mukerjee. “We have just one mechanical part, the motor, so if the motor works, the system will work.” Importantly for an instrument destined for space, the design does not depend on gravity to function.

The standard laboratory process for collecting and analyzing blood (lower row) is more complicated than the simplified system developed by the research team (top row).

It Only Takes a Drop

The tradeoff for mechanical simplicity is the complexity of the microfluidics—the network of channels and nonmechanical valves only tens to hundreds of micrometers wide—on the cartridge itself. These channels function like tiny test tubes and work in conjunction with the motion of the cartridges as they spin around a central axis to move, control, order, and layer elements of the fluid sample. “By changing the speed at which the cartridge spins, we can move fluid in specific ways and perform different analysis steps. The design of the valves means that we can temporarily control the location of all fluids with just one parameter,” notes Mukerjee.

The researchers’ design efficiently separates the liquid and solid elements of blood so they can undergo different tests. Measurements of the relative quantities of blood’s cellular components—the red blood cells, various types of white blood cells, and platelets—can provide critical information regarding inflammation, infection, radiation exposure, and cancer. The liquid portion, the plasma, is shuttled to the microarrays for identification of metabolites and proteins of interest. (Certain metabolites form as a biological reaction to environmental conditions, like exposure to radiation or a pathogen.) Searching for a different set of biomarkers will be as simple as switching to a cartridge targeting another set of metabolites and proteins.

One of the many attractive features of microfluidics systems is that they require far smaller samples than conventional clinical assays—200 times less than the amount needed for a standard panel of blood tests, for instance. Laboratory radiobiologist and project principal investigator Matt Coleman says, “For our project, we aim to work with less than 100 microliters of blood. That’s just a drop or two. Clinically, it’s easier to get the blood from a finger prick rather than finding a vein. It limits the trauma, pain, and inconvenience.” Further, the biomarker assay tests can be performed in just 15 minutes, far faster than conventional tests. “The beauty of this technology is that it’s at the point of care—the analysis happens where the patient is,” adds Coleman. “That’s more efficient.” 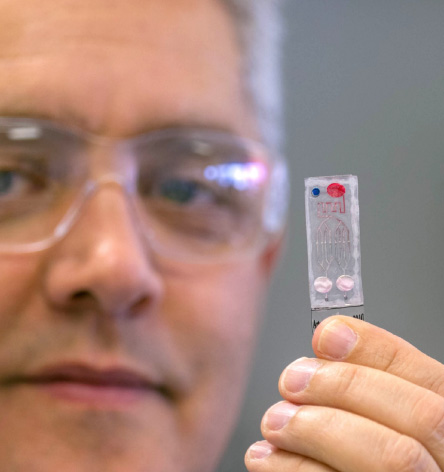 Radiobiologist Matt Coleman displays a disposable protein detection assay similar to those that will be used in the medical diagnosis instrument he is helping to develop. (Photo: Julie Russell)

(Not) Breaking the Mold

Livermore scientists and engineers—Coleman, Mukerjee, engineer Michael Triplett, physicist Matthias Frank, and graduate student Kristen Reese—have taken the lead on designing and refining the system’s microfluidics. Given that everything about the material and dimensions of the cartridge and channels affects performance, this has proven challenging. The team has made major strides, though, thanks to the Laboratory’s rapid prototyping capabilities. “We can revise and print a new design in one day,” says Triplett, “and new technology enables complex microfabrication shapes.”

After generating a cartridge design, the Livermore team employs a 3D printing technology—stereolithography—to create a reverse mold of it from a fairly stiff plastic. They then fill the reverse mold with a softer silicone rubber to create a stamp and press it into a heated, harder plastic. The rubber shape serves as the actual stamp for the cartridges. This method of pressing a flexible stamp into a hard surface to create a three-dimensional structure is known as hot embossing, and the team hopes to incorporate it into future microfluidics projects. Before adopting this approach, the team struggled with making high-resolution parts without the mold breaking. After test printing a design, the team sends it to University of Arizona technicians, who manufacture larger quantities of the cartridge for testing and analysis.

The prototype cartridges are integral to animal model studies performed in conjunction with the Air Force, which supplies the team with baseline samples of healthy subjects for comparisons between standard assays and assays performed with the microfluidics system. Future studies will validate system performance for subjects with injuries, environmental exposures, or disease. Eventually, the project team will conduct human clinical trials. 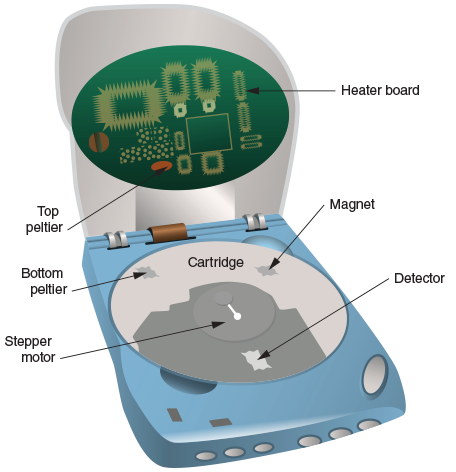 Early concept for the portable microfluidics-based analysis tool, which uses centrifugal force to move and separate sample components. The design originally called for disposable discs for fluid analysis, but the researchers have since moved to rectangular cartridges arrayed around the center like spokes on a wheel. The cartridges weigh less and are interchangeable for a more customized assessment.

Excitement Is in the Air

The researchers will ultimately integrate automated data analysis technology, the microfluidics element, and instrumentation for analyzing breath biochemistry into one compact, simple-to-use unit. The latter diagnostic, which has been under development for 15 years, employs carbon nanotube-based sensors to capture and separate breath and saliva for biomarker analysis. Liquid components will be passed to the microarray, while a miniature spectrometer will identify individual chemical compounds in exhaled breath.

Says Coleman, “E-nose is a NASA technology we’re very excited about. It’s a gas-phase chemical analyzer that detects volatile compounds in breath. If an astronaut needs urgent evaluation, it’s easier to have them breathe into the device than to take a blood sample.” However, because biomarker research for breath is still in its infancy compared with blood, explains Loftus, “the integrated device is key. We can take advantage of the best of both analysis approaches and share specimens across platforms.”

The research team hopes to have a diagnostic platform ready for NASA moon missions in the late 2020s—or possibly even sooner for the ISS, where it could help expedite ongoing animal research. But their vision is broader than that. The researchers recognize that rapid analysis of radiation exposure effects, for example, would be as valuable for first responders after a nuclear accident as for astronauts en route to Mars, and they are eager to explore and encourage other such uses for their new diagnostic tool. “The more we think about terrestrial applications for this technology, the more excited we get,” says Loftus.