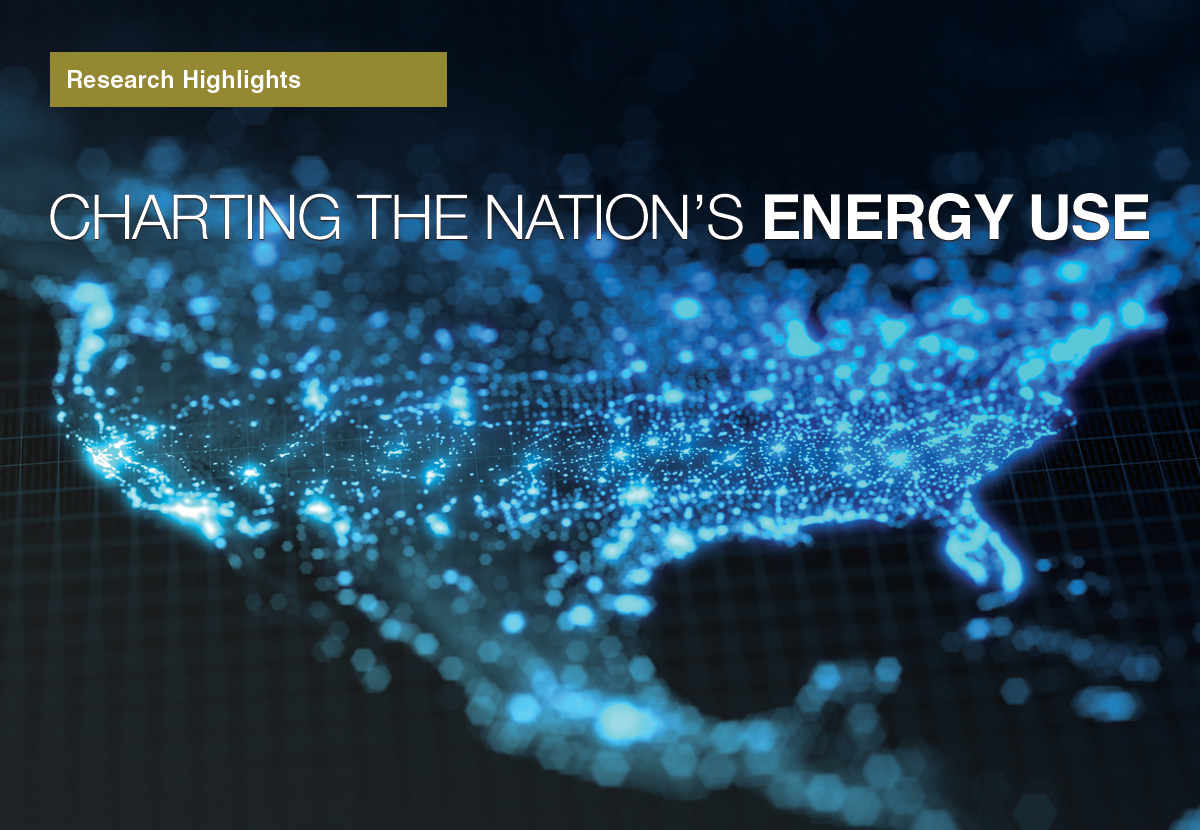 
ENERGY powers the nation, flowing from resources such as oil, the Sun, and natural gas to our homes, industries, businesses, and infrastructure in a complex, interconnected web. The multifaceted nature of U.S. energy supply and demand can yield complicated answers to simple questions: Which resources provide the most power? What sectors still rely on coal? Is geothermal energy on the rise? How much energy do we consume as a nation, and how efficiently is it used?

In the mid-1970s, Lawrence Livermore National Laboratory began developing a way to visualize answers to questions about energy use, creating easy-to-understand energy flow charts—one-page diagrams of U.S. resources and their consumption over a one-year period. Each flow chart draws upon immense data sets compiled by the Department of Energy’s Energy Information Administration (EIA), presenting the information in an easily understandable form.

Nearly 50 years of diagrams chronicle the nation’s energy use and how its dependency on different resources has changed as new technologies emerged and national priorities changed. The energy flow charts, released each spring and available in a searchable format at Energy Flow Charts, help scientists, analysts, and the nation’s decision makers visualize the complex interrelationships involved in powering the nation. By bringing clarity to these important issues, this ongoing project provides information critical to national energy and resource security.

Lawrence Livermore’s A.J. Simon, the project’s principal investigator, notes that part of the Laboratory’s national security mission is to explore ways to help achieve U.S. energy and resource security in an evolving energy and climate landscape. Part of that work requires knowing the flow of energy in the here and now, and how that compares to the past. Mapping the energy flow through the national economy relates to that mission. “The project feeds directly into the Laboratory’s energy security and climate resilience mission to secure and expand the supply and delivery of affordable, clean energy,” says Simon. “This mission requires us to understand and communicate the ins and outs of energy production, distribution, and utilization.”

Project analyst Hannah Goldstein creates the energy flow charts, which take the form of Sankey diagrams. Sankey diagrams are used for data visualization in process engineering, energy management, manufacturing, and other areas. The energy flow charts, reading left to right, present material, energy, and cost flows from resource to final disposition. Goldstein explains, “The size of each box and width of each line provide a general correlation to the amounts of energy involved. Thus, the bigger the box or the thicker the line, the larger the energy flow.”

Raw energy resources fall into one of three categories: renewable (solar, hydro, wind, geothermal, and biomass), nuclear, and fossil (natural gas, coal, and petroleum). The energy amounts for the resources are represented in quads—a quadrillion (one thousand trillion) British Thermal Units (BTUs). For comparison, 20 million passenger cars consume about a single quad of energy in a year.

In the center of the diagram, the flow lines split and recombine, showing how portions of energy from different resources move through the energy system to fulfill the needs of various sectors of the nation’s economy and infrastructure. All of these resources contribute some fraction of their total energy to the production of electricity—from nuclear energy, which contributes 100 percent of all 8.46 quads to electricity generation annually, to petroleum, which is primarily used for transportation but still contributes 0.19 quads to niche electricity generation applications.

Whether from generated electricity or directly from the raw resources, energy flows continue to boxes representing economic end use sectors: residential (houses and apartment buildings), business (including office buildings, retail, restaurants, stores, and hospitals), industrial (including manufacturing, agriculture, and construction), and transportation (cars, trucks, planes, trains, ships, etc.). To the far right, a set of boxes indicates the total energy expended by these sectors, from keeping cars on the road to heating and cooling homes.

The final box on the right side of the energy flow diagram represents rejected energy, energy released back into the environment. As Simon notes, the first law of thermodynamics states that energy cannot be created or destroyed. “The second law says that whenever we transform energy from one form to another, we lose some energy along the way. This lost or ‘rejected’ energy is often released as heat. For example, when driving a car, approximately 20% of the energy from the fuel reaches the wheels. The rest goes back into the environment in the form of heat released through the radiator or the tailpipe.” 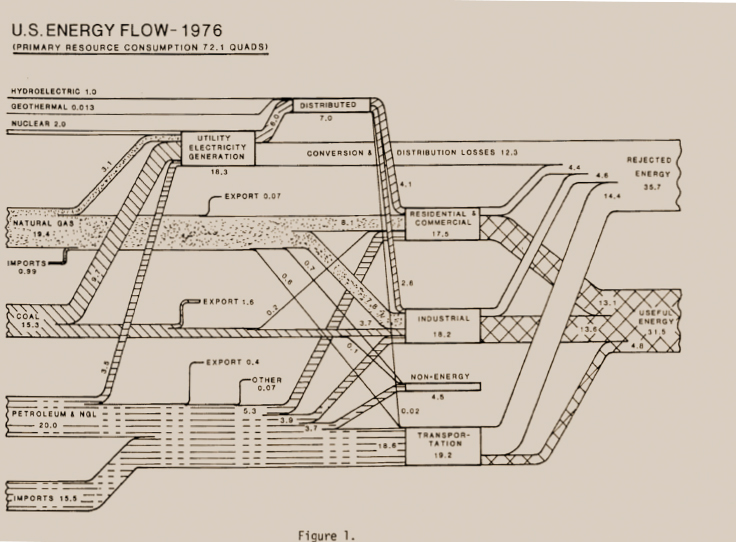 Many of Lawrence Livermore’s early energy flow charts were visually complex, showing myriad details such as this one for 1976, which includes information on imported and exported energy. Charts created in the ‘70s and ‘80s were hand-drawn, whereas later versions were created with various software tools.

Early charts were visually complex, including details such as imported and exported energy resources. “The results sometimes had the unfortunate characteristic of looking like a plate of tangled spaghetti,” says Simon. Today’s charts are streamlined, with a focus on the data and presentation. “We zero in on what the audience wants to know and how best to portray that information,” says Goldstein. “For example, we look at whether some of the resources can be bundled together or if more details are required. We also consider how best to lay out the lines of flow to make the chart easier to read.”

Livermore’s energy flow charts show, over time, how the country’s energy use has changed. “For instance,” says Simon, “when the oil crisis hit in the 1970s, the country began shifting away from its heavy reliance on oil for generating electricity to using more coal and natural gas, which were domestically abundant fuels at the time. In the late 1980s, nuclear power became a significant source of electricity. Starting in the mid-2000s, the charts show solar and wind becoming meaningful contributors. Before then, the lines representing these renewable resources were barely a pixel in width. In the earliest charts, they aren’t even listed.”

Just as utilization of resources has changed over time, so have the production and appearance of the energy flow charts themselves. Originally, a researcher reviewed sparsely published estimates of energy use, and a graphic designer drew the chart by hand, using rulers and ink. In the decades following the energy crisis of the 1970s, the EIA and its predecessor organizations developed more sophisticated, comprehensive, and accessible data products describing energy resources, conversion, and use. Graphics programs became available in the 1990s, and the project team built their own Javabased desktop program in the 2010s.

With the introduction of commercially available Sankey diagram software, production and updating became even easier. Goldstein notes, however, producing the charts requires more effort than pouring data into the Sankey software. “Creating a final chart is an art,” she says. 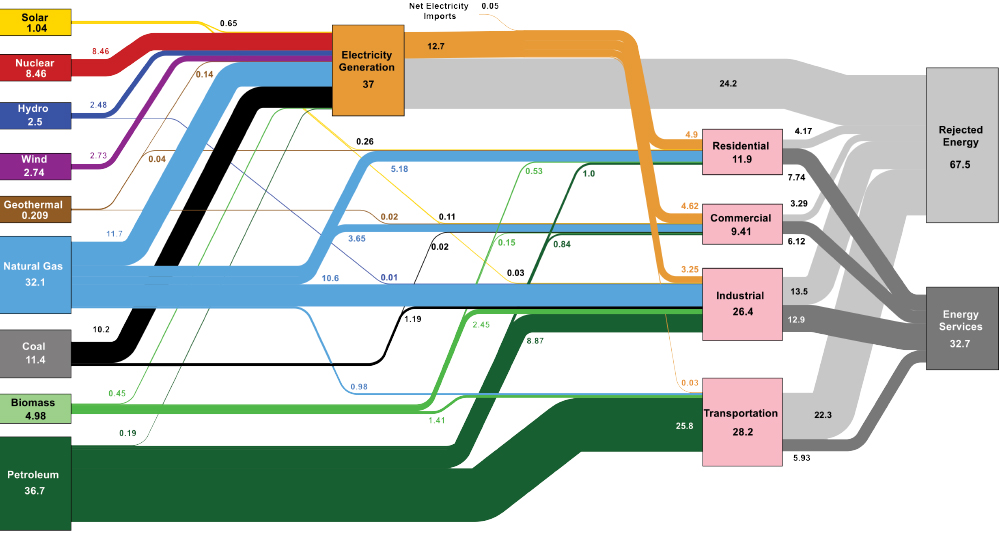 Energy flow charts produced by Lawrence Livermore researchers present a wealth of information about (left) where the nation’s energy comes from, (center) how much of each resource is used in various sectors, and (right) how efficiently that energy produces end-use services.

As the project has garnered more attention and interest over the years, the researchers have tackled requests for custom charts such as the 2010 introduction of a flow chart focused on energy use in the U.S. transportation and residential sectors. Such analyses provide insights that can be used, for instance, in identifying underused resources or opportunities for better technology. In 2010, the Laboratory worked with DOE’s Office of Energy Policy and Systems Analysis and the National Energy Technology Laboratory to produce an atlas of hybrid energy/water Sankey diagrams depicting energy use and water flow in each state.

Simon and Goldstein continue to respond to organizations such as the Department of Defense and others as they seek to better understand different energy scenarios. “We don’t build models of energy futures, but we do help other researchers visualize them,” says Simon.

Some requests for diagrams go beyond simple energy use, seeking charts that present the complex relationships among energy, water, and carbon. Goldstein notes, “We recently released carbon dioxide emission flow charts up to the year 2018, nationwide, and up to the year 2017 statewide. All these charts are now on the website as well.” Goldstein has also drawn on data from the International Energy Agency for international energy charts.

The usefulness and visibility of the Laboratory’s effort continues to expand. The production of the charts and their level of detail may have changed, but the effort has real staying power. “The Lab has been producing these for almost half a century,” says Simon. “Clearly, they are valued. We keep seeing new users show up and previous requesters return. They understand that these diagrams are great snapshots that help explain our nation’s complex energy systems in single, very visual images.”