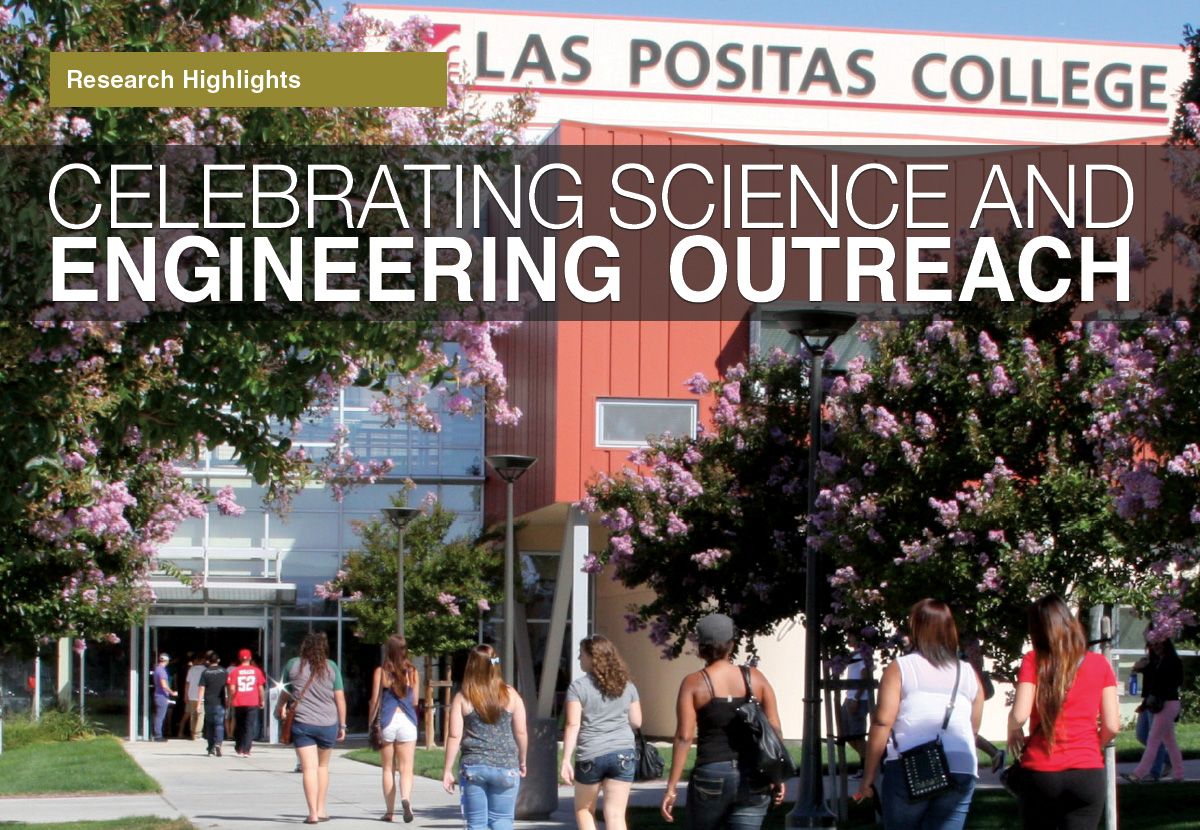 Lawrence Livermore National Laboratory and Las Positas College (LPC) have jointly hosted a science and engineering seminar series on the LPC campus for over 10 years, cultivating connections between the Laboratory and LPC students. (Photo courtesy of Doug Jorgensen, The Independent.)

IN the summer of 2010, an event hosted by the Lawrence Livermore Science Education program left a lasting impression on Nan Ho, a biology professor at Las Positas College (LPC). Richard Farnsworth, then the science education program manager, had organized the presentation “Engineer vs. Scientist” with physicist Chris Eberle and engineer Rick Cross, both from Lawrence Livermore. “Listening to these two people exchange ideas, after years of working together, I was fascinated by how they approached the same, complex problem in different ways but engaged with each other as team members,” says Ho. “That richness of perspectives seared into my memory. I also realized that I would not have been able to learn how much exciting work happened at the Lab if I had not been ‘past the gate.’”

As a Department of Energy Academies Creating Teacher Scientists (DOE ACTS) program fellow, Ho had the opportunity to attend presentations and observe Livermore’s research firsthand. DOE ACTS, designed by the department’s Office of Science, aimed to create outstanding science and math instructors armed with scientific information and research experience to serve as positive change agents and leaders in their teaching communities.

Ho asked Farnsworth to explore cultivating a connection between Livermore scientists and LPC students and faculty. At the time, the only way for those without a Livermore badge to learn about the Laboratory’s work was by attending Science on Saturday lectures. Beth Vitalis, a Livermore biomedical scientist, adjunct biology professor, and colleague of Ho’s at LPC, introduced the joint seminar concept to her colleague Kris Kulp, then a group leader in the Biosciences and Biotechnology Division and now the division leader. Ho also recruited Neal Ely, LPC dean of Math, Science, Engineering, and Public Safety, to join Vitalis, Kulp, and Farnsworth to launch the LLNL/LPC Science and Engineering Seminar Series. 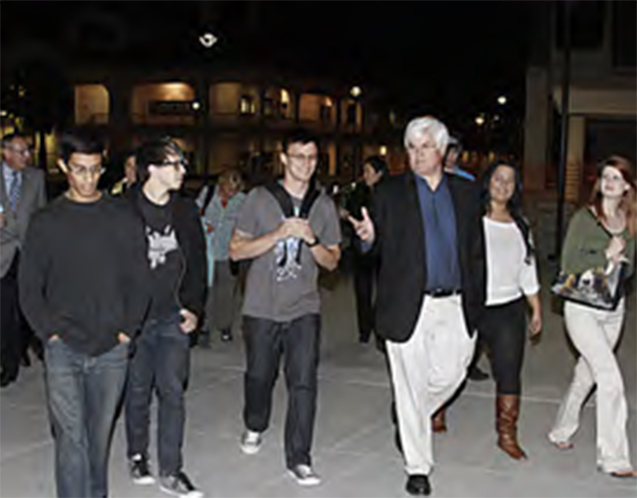 The first presentation, in October 2010, featured Kulp and physicist Kuang Jen Wu in “Biology as a Team Sport: How Physicists, Chemists, Statisticians, and Biologists Work Together.” Kulp and Wu discussed using time-of-flight secondary ion mass spectrometry to image biological samples. Kulp recalls, “The speaker series was a perfect idea, and the seminar was great fun. We really emphasized team science. Kuang Jen and I each gave a piece of the presentation, so that the students could see how the two different disciplines worked together to tackle the same problem. The auditorium was standing room only, and the students were enthusiastic and engaged.”

Over the next 10 years, approximately 70 scientists and engineers presented their work to the LPC community. As the speaker series evolved, so too did the topics. “Some topics were really technical, but we found speakers who we knew would appeal to college students and the local community,” says Ho. From micro- and nanotechnology and bioengineering to experimental plasma physics, seismology, and public safety, scientific divisions from the Laboratory have presented to a packed auditorium at LPC. A highlight of the series came in fall 2012 when then Laboratory Director Parney Albright presented “Running a National Lab and What It Takes to Succeed at One.” Albright provided an overview of the Laboratory missions and his personal take on how to succeed in a science career, emphasizing the need for expertise, breadth of experience, and a commitment to excellence.

In addition to lectures, the series offers an exclusive opportunity for select science and engineering students to meet in small groups with the Livermore scientists and show them around the LPC science facilities. “At first, the students can feel somewhat nervous about talking to the Livermore scientists,” says Ho. “But someone always asks, ‘How did you become a scientist or engineer? Do you have any advice?’ And the common response is that everyone has a unique professional journey loaded with unexpected twists and turns. Having scientists speak to the LPC students gives them a better sense of what a career in science or engineering involves, and that it is attainable. These experiences remove some of the mystery. The students aren’t intimidated; their horizons expand. And the connection between the students and the speakers is really powerful.” The seminar series has facilitated many professional networking relationships over the years that have yielded internships and even full-time employment positions at the Laboratory. 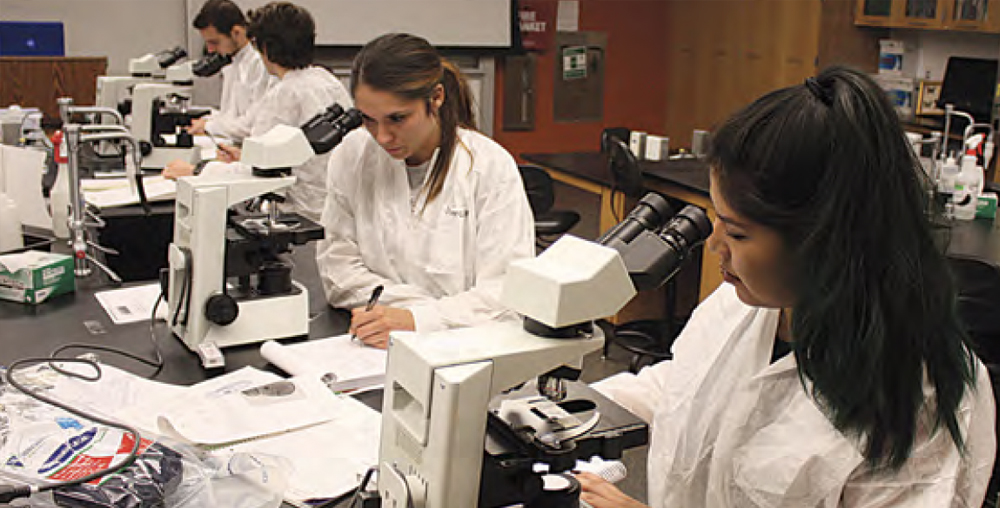 The seminar series, attended by thousands of students over the last decade, supports and inspires students attending LPC to build science and research skills. (Photo courtesy of LPC.)

In spring 2017, Javier Alvarado, just completing an internship in Livermore’s Materials Engineering Division, decided to take classes at LPC to refresh his math skills and explore biology and computer-aided design. Seeing posters for an upcoming LLNL/LPC lecture, “The Science behind 3D Printing,” part of the Theory to Practice: How Science Gets Done series, Alvarado spotted an opportunity he knew he could not miss. “I was entering the field of 3D bioprinting and wanted to know more about 3D printing aspects—the materials, the challenges,” says Alvarado. “I thought, ‘The speakers could be people I work with in the future.’” 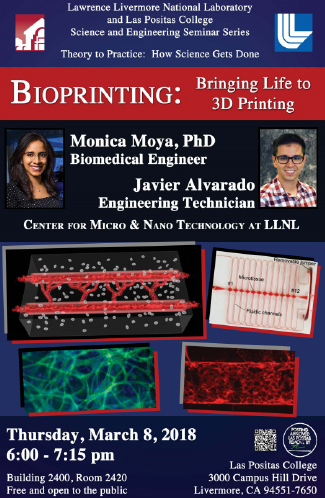 The March 2018 event “Bioprinting: Bringing Life to 3D Printing” featured the work of LLNL’s Monica Moya and Javier Alvarado, who had been an LPC student the year before.


Then, in March 2018, Alvarado, now a full-time employee, was invited by his mentor, Monica Moya, to co-present with her at the LLNL/LPC seminar to discuss his work in 3D cell culture, biomaterials, and applying 3D bioprinting techniques to model the neurovascular environment in vitro. The prospect of speaking about his research in front of 300 people initially terrified Alvarado, but three words into the talk, he loved the experience.

During Alvarado’s portion of the presentation, “Bioprinting: Bringing Life to 3D Printing,” he demonstrated how diversity in thought, knowledge, and process can come together to answer big questions. Alvarado described in simple, accessible terms how he applies the scientific method and the engineering design process together to tackle problems, saying, “I have an idea. Let me try it and keep troubleshooting until I figure it out.”

“After the presentation, and after talking to the students, I felt great seeing how my work can have a positive impact,” says Alvarado. “If underserved students can get a better sense of what it takes to be an engineer, maybe that visibility will attract them to a career in science and engineering they might not have considered.” Alvarado’s family sat in the crowd that day, including his grandfather who was suffering from dementia. “Having recently lost my grandfather to COVID-19, the experience of presenting at LPC has even more significance to me and my current path,” says Alvarado, who is pursuing his master’s in Bioengineering at UC Riverside with support from Livermore’s Education Assistance Program while working full time at the Lab. He went on to present a second time in Lawrence Livermore’s Science on Saturday lecture series for middle and high school students in 2019. 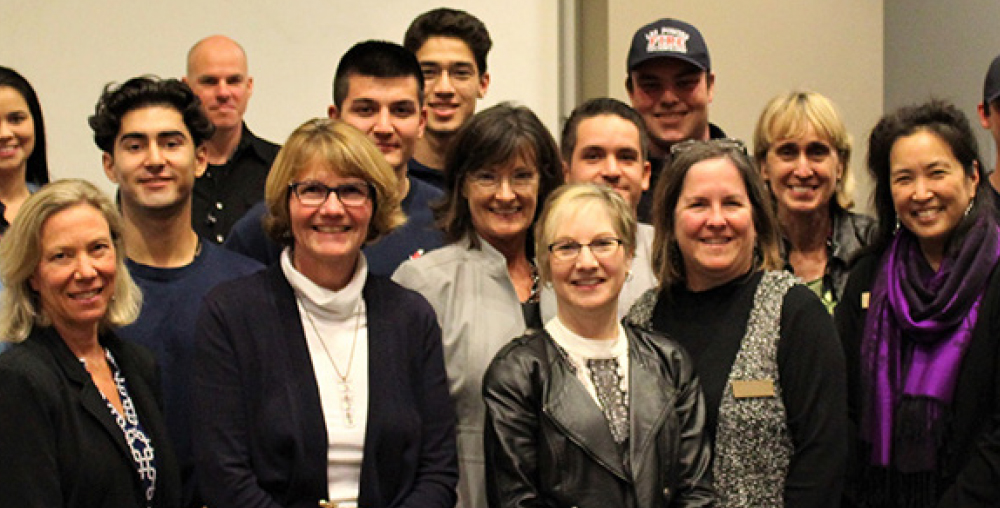 Over the years, many people have worked behind the scenes on the collaboration. “The seminar series provides a great opportunity for LPC students to see the variety of science and engineering research efforts going on inside the Lab, and to learn about internships and future career opportunities,” says Joanna Albala, Livermore’s Science Education program manager. “Sadly, Dick Farnsworth passed away last March, but he would be so proud to know that his work continues.” Albala credits LPC team members including Adeliza Flores, Barbara Zingg, Caryl Shill, Jean O’Neil-Opipari, Mike Ansell, Robin Rehagen, and other faculty and staff who have supported the series and encouraged students to attend. “From running the video cameras to designing fliers and accompanying the Livermore guests on tours of the LPC campus labs, the series is an authentic team effort, energized and sustained by Laboratory members as well as faculty, students, and staff,” says Albala.

To kick off the seminar series’ tenth year in October 2019, Jessica Osuna, an operations scientist at the Livermore’s National Atmospheric Release Advisory Center spoke about interdisciplinary science in support of public safety. The following month, Carolyn Koester, associate director of the Forensic Science Center, presented “Responding to Chemical Warfare,” and Kulp was honored for her 10 years of service on the seminar planning team with a plaque presented by Ho. “The enduring nature of the seminar series is a testament to its importance,” says Kulp. “Engaging and inspiring the next generation of scientists and engineers is vital to the Lab’s pursuit of scientific excellence. Interacting with talented students is a great way to start! We hope to sustain the seminar series well into the future and see more success stories like Javier Alvarado’s.” LPC interim president Roanna Bennie also honored the partnership with Albala accepting the award on behalf of the Laboratory. The wording on the plaque captured the spirit and mission of the two partners: “Creating a Vibrant Celebration of Science and Engineering for the Community.”

The seminar series continues to engage audiences despite moving to a virtual format in response to COVID-19 restrictions. Ho, now dean of Science, Technology, Engineering, and Mathematics at LPC, still possesses the same passion for educating and inspiring the next generation of scientists and engineers while showcasing the opportunities and capabilities Lawrence Livermore offers. “Thousands of students have attended these seminars over the last decade,” says Ho. “The fact that the series is entirely volunteer-based and has lasted for over 10 years is remarkable. How often do you get that kind of commitment and connection? I would love to see it celebrate another 10 years.”