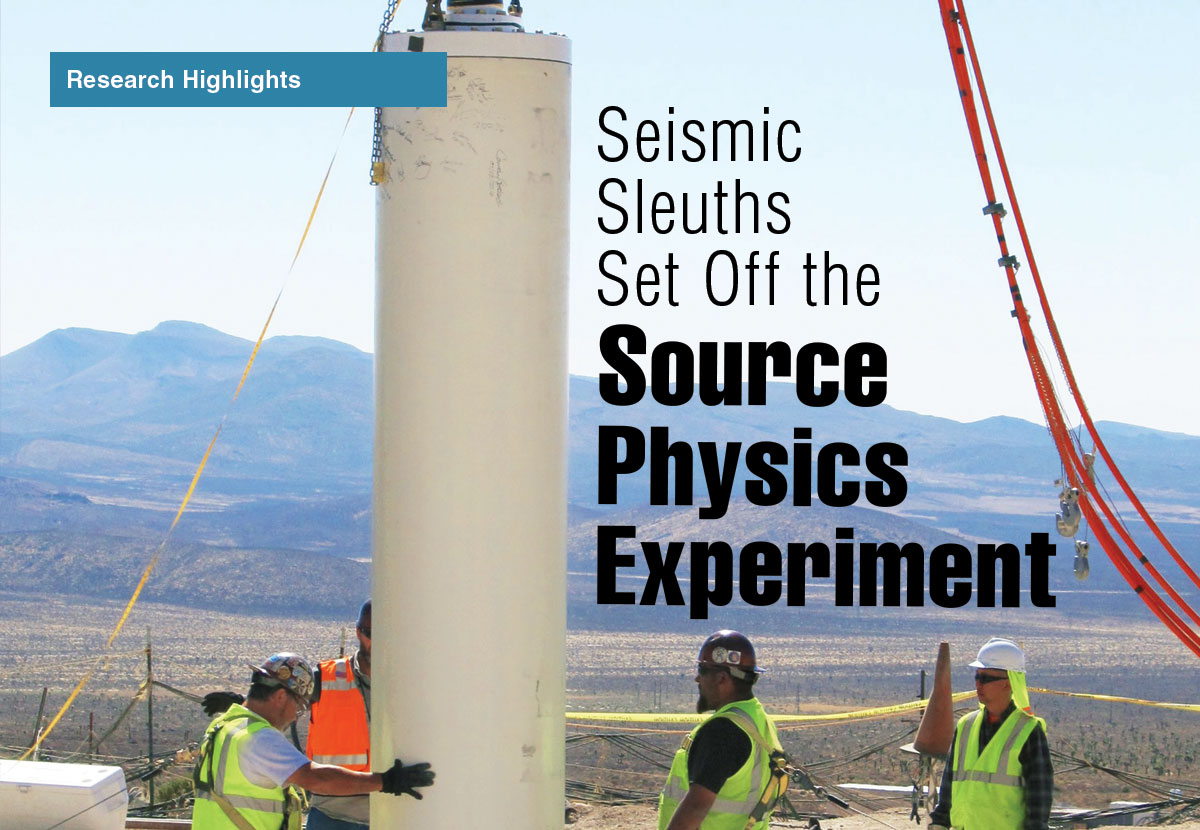 The ground rumbles and seismic waves radiate away from an underground chemical explosion less than 100 meters below the Earth’s surface in southwestern Nevada. The waves travel through granite at speeds of two to eight kilometers per second depending on the type of wave. Above ground, more than 100 seismic instruments record every nuance of the waves’ frequencies, travel times, and amplitudes, while additional instruments record acoustic, electromagnetic, and visual data. Planning for this test took months, but the results, which will yield vast amounts of data in a matter of seconds, will provide important, new insights.

The data will help the scientists of the Source Physics Experiment (SPE) discriminate among the seismic fingerprints of a small, illicit nuclear explosion, an earthquake, a mine disaster, or any of the other noises, squeaks, and geophysical undulations that a variety of human activities and natural phenomena generate. The results of the SPE will make a difference half a world away—or anywhere throughout the world—where adversaries try to surreptitiously develop nuclear weapons. The SPE data will also help characterize the yields of declared underground nuclear tests—the most recent of which were conducted by the Democratic People’s Republic of Korea (North Korea). “The purpose of the Source Physics Experiment,” says William R. Walter, Lawrence Livermore geophysicist and chief scientist for several of the SPE series experiments, “is to provide the data to develop, test, and validate software codes used to monitor for nuclear explosions and characterize any that are detected. Now that nuclear testing is no longer performed, we need physics-based methodologies to perform validation.”

Massive Undertaking of Many Partners

A considerable endeavor involving Lawrence Livermore, Los Alamos, and Sandia national laboratories; the Nevada National Security Site (NNSS) and its operator, Mission Support and Test Services; the University of Nevada, Reno; the Air Force Technical Applications Center; the Defense Threat Reduction Agency; and the National Nuclear Security Administration (NNSA), SPE improves the identification of nuclear events, and the ability to tell them apart from non-nuclear occurrences, as well as bolsters the ability to estimate the yields of nuclear explosions in different types of rock and to model underground detonations.

Phase I of SPE occurred between 2010 and 2016 as a series of detonations at the NNSS, formerly called the Nevada Test Site, where many U.S. nuclear tests were performed before the cessation of testing in September 1992. SPE Phase I consisted of six detonations at varying depths between 31 meters and 87 meters in a borehole drilled into the area’s granite “basement” rock. The chemical explosions’ yields ranged from an equivalent of 80 kilograms to 5,000 kilograms of trinitrotoluene (TNT). 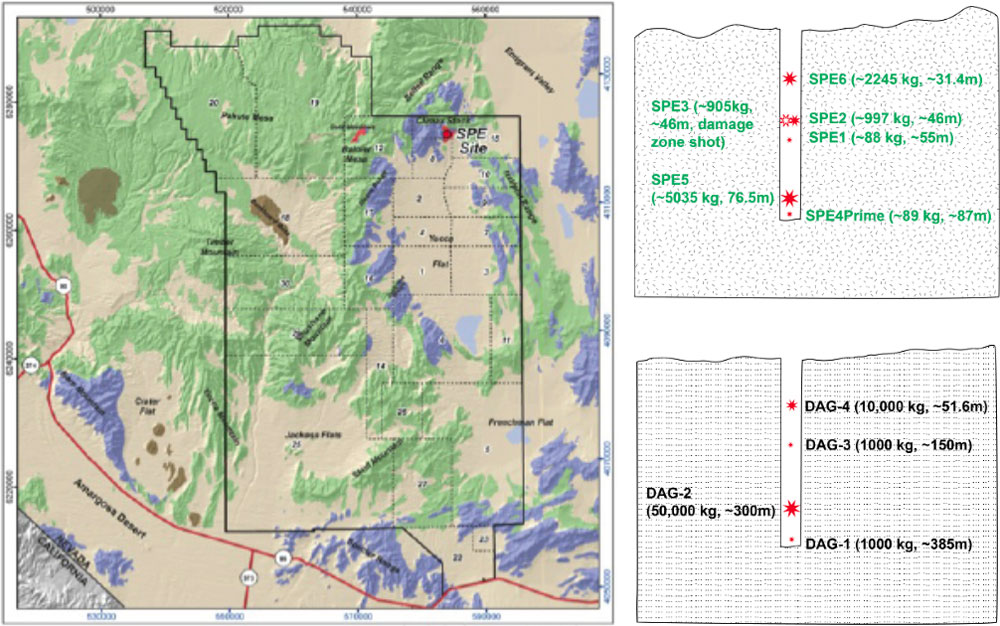 The locations of the SPE experiments at the Nevada National Security Site (NNSS). The insets show the depth and explosive yields of each detonation of SPE Phase I in granite, and SPE Phase II DAG (Dry Alluvium Geology).

The SPE team carried out Phase II, the Dry Alluvium Geology (DAG), between 2017 and 2019. These four explosions were emplaced in a hole drilled into sandy, rocky, and boulder-filled sediments in another area of the NNSS. The geologic opposite of Phase I, the Phase II DAG shots ranged at depths from 50 to almost 400 m, with two explosion yields of 1,000 kg, one at 10,000 kg, and one at 50,000 kg. The Phase II blasts were designed to be 10 times larger than those of SPE Phase I to produce the same degree of shaking in alluvium as in granite. More than 1,000 seismometers recorded seismic data from the surface and from underground boreholes near the detonation, while other instruments collected surface and airborne acoustic data of sound waves above the site, as well as low-frequency infrasound waves generated by the quakes, electromagnetic measurements, and video footage.

Correctly estimating the yield of shots and modeling them with high-performance computers requires understanding how seismic waves propagate in different geologies. “The geology of the detonation site matters a lot,” says Walter, “The geology in Nevada is very different from the Russian test site and the former Soviet test site in Kazakhstan.” As a result, seismic recordings of U.S. and Soviet tests from the nuclear testing era are not directly comparable, so back in 1988, the U.S. and Soviet Union agreed to monitor each other’s underground tests to assist treaty verification.

Earthquakes produce several types of waves, including primary or pressure (P) and secondary or shear (S) waves. P-waves are similar to sound waves, and the medium through which they travel compresses and expands in the same direction the wave travels. P-waves travel faster than S-waves, which are produced as the medium oscillates perpendicularly to the wave’s direction of travel, producing a shear force. The ratio of the heights, or amplitudes, of P-waves to S-waves (P/S ratio) varies between explosions and earthquakes at high frequencies, providing a generally reliable way of differentiating the two. In explosions, measured P/S wave ratios are usually greater than one, but earthquakes produce higher-amplitude S-waves, resulting in very low P/S ratios. Sometimes, however, this method produces inconsistent results. For example, researchers do not understand why the P/S ratio of one recorded, unusually deep nuclear detonation was more like an earthquake rather than a nuclear test. Anomalies like this, and the lack of seismic models for explosions in dry alluvium, have motivated the SPE program to gather data from different types of geology.

With the SPE Phase I and II shots complete, the team is now analyzing the voluminous amounts of data they have collected. Already, the data have revealed discoveries. The DAG shots display distinct differences from explosions in granite, including major differences in the size and frequency content of the seismic amplitudes that will provide helpful methods for evaluating yields in different geologies. 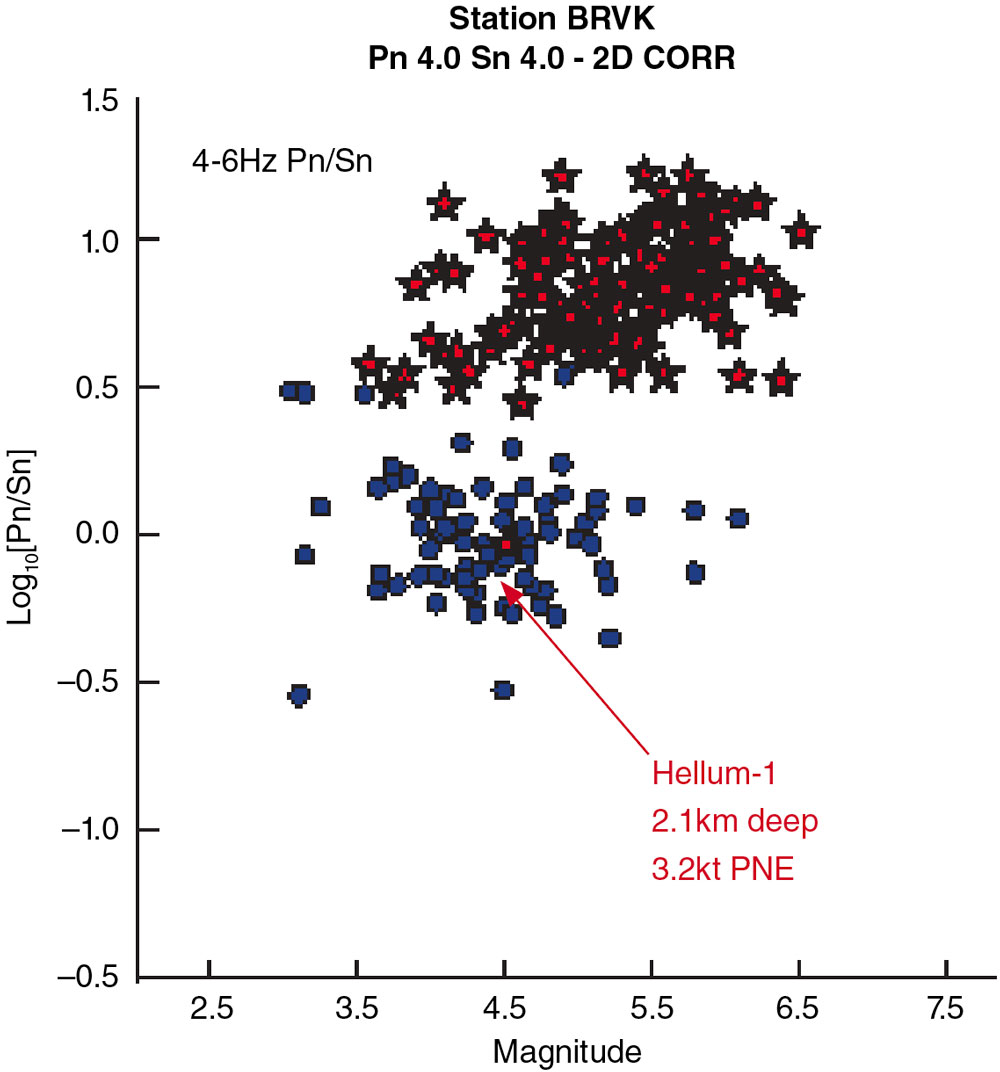 A nuclear explosion usually generates a ratio of P-waves to S-waves amplitudes (red stars) greater than one (Note that 0.0 = Log (1), 0.5 ~ Log (3) and 1.0 = Log (10) ), while earthquakes generate far more powerful S-waves than P-waves (blue circles), resulting in lower P/S ratios. But the P/S ratio of one unusually deep nuclear test, Hellum-1, looks like an earthquake. Explaining anomalies like these motivated the SPE’s research program.

Although earthquakes generate both types of waves, explosions theoretically should not generate S-waves as the energy emanates radially. In fact, explosions often create S-waves, but how they are generated has been poorly understood. “No one had a good model for how chemical explosions in the alluvium generate S-waves, but the DAG data shows in great detail how they do,” says Walter. “Now there will be a push to revise the monitoring models used for these explosions to correctly predict S-wave generation and propagation.” The SPE team also saw evidence that S-waves were generated very close to the explosion, indicating that multiple mechanisms appear to contribute to what previously could only be monitored from a distance.

Another effect revealed in the DAG data was the conversion of P- and surface waves into S-waves as they travel. The transformation happens quickly, within about one or two km from the explosion. The SPE data led to significant improvements and validation of the modeling codes. Two wave modeling codes are used: GeoDyn-L, which models the nonlinear hydrodynamic behavior of rocks under strong shock, and SW4 (Seismic Waves 4th Order), which models seismic wave propagation in three-dimensions. Both codes leveraged institutional Laboratory Directed Research and Development investments, and together they represent the state of the art in modeling seismic wave generation and propagation in complex earth structures. 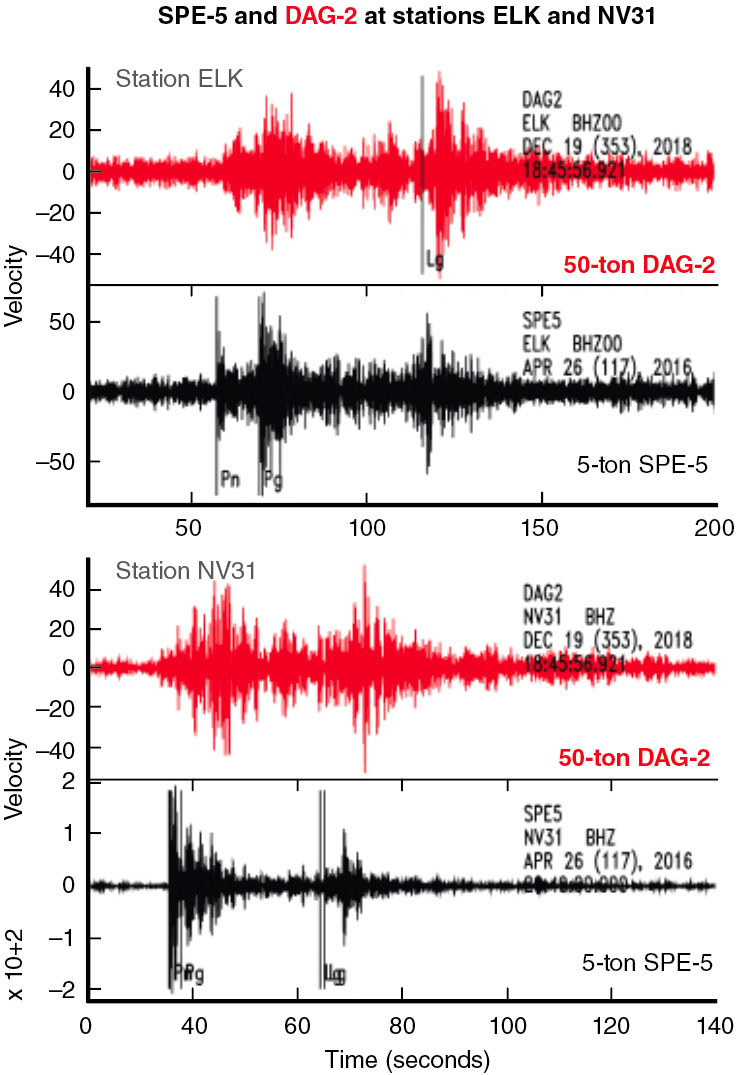 Examples of data collected during an SPE 5-ton shot in granite (black waveform) vs. a 50-ton DAG shot in alluvium (red) show similar amplitudes despite their large yield difference and more subtle difference in their relative P- and S-wave amplitudes. These differences will help the SPE team develop better methods to model detonations in different types of geology.

A third surprise in the data was the presence of aftershocks in the alluvium shots. Aftershocks were observed following some nuclear tests, but were fewer than typically observed after earthquakes. As a result, the number of aftershocks measured after an unknown event could help determine whether it was an explosion or an earthquake. The team recorded few aftershocks after the SPE shots in granite, but to their astonishment, they saw many tiny aftershocks in the alluvium shots following the largest 50-ton DAG-2 test. The mechanisms behind the generation of these aftershocks is still being studied, but the answer could help explain why induced earthquakes sometimes occur where fracking for oil and gas in porous or sandy rock formations takes place. One explanation is that an explosion gradually drives pressurized gases through the sediment to the surface, causing tiny tremors. 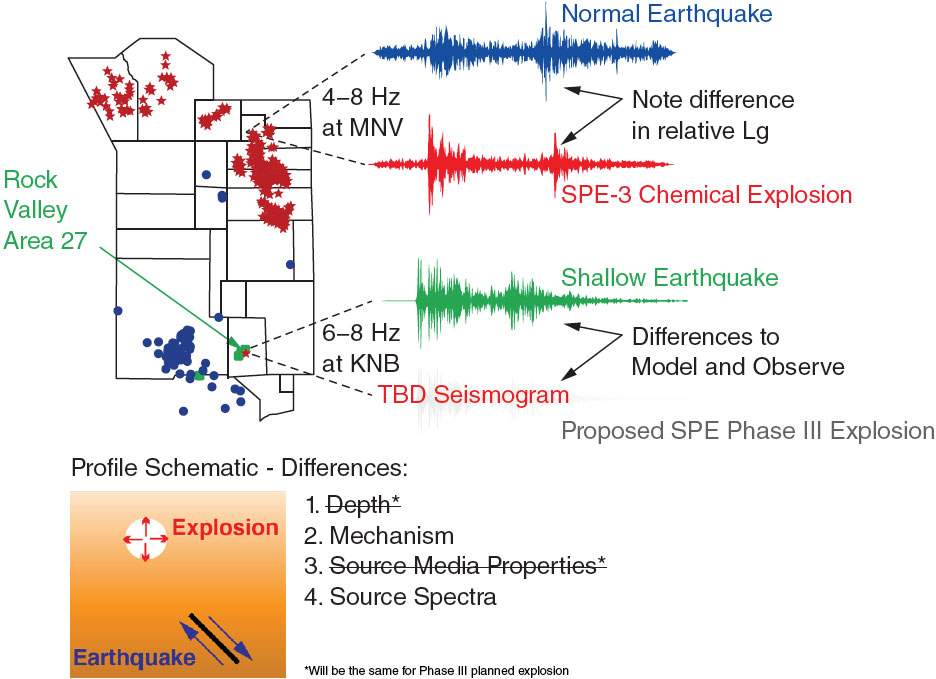 SPE Phase III will directly compare the relative P/S wave amplitudes of a new chemical explosion with earthquakes in the same media and at the same depth in a region of the NNSS where unusually shallow (1–3 km depth) earthquakes (green) have occurred. This will improve understanding of the P/S differences observed between normal depth (5–15 km) earthquakes (blue) and SPE-3 chemical explosions (red).

Releasing Data to All Users

Since the SPE began, the multi-institutional team has produced more than 40 peer-reviewed publications and in January 2021, the SPE Phase II DAG team received the Department of Energy’s Secretary of Energy Achievement Award. In addition, all of the data from SPE Phase I shots are publicly available now, and the Phase II DAG shot data will eventually be made accessible on the Incorporated Research Institutions for Seismology website: www.iris.edu. SPE data and results provide valuable resources to the world’s nuclear nonproliferation community. For the United States, the SPE data and scientific results equip experts with better tools, such as high-performance computer modeling of explosions to discern the signals of actual illicit nuclear tests from other natural geophysical phenomena. Yet some uncertainties remain between deciphering explosion and earthquake signatures, which SPE scientists hope to resolve in SPE Phase III. For this next phase, the team is exploring ways to obtain a direct comparison of the two kinds of seismic waves in the exact same media at the same depth by drilling into the location of a previously recorded earthquake, setting off explosions, and recording the explosive test data at the same stations that recorded the naturally occurring earthquake. “Explosion monitoring is a nice problem in geophysics,” says Walter. “You get to use every tool in the toolbox, including many types of field data, algorithms, and lab experiments. And there is satisfaction in knowing that the work helps make the world a safer place.”