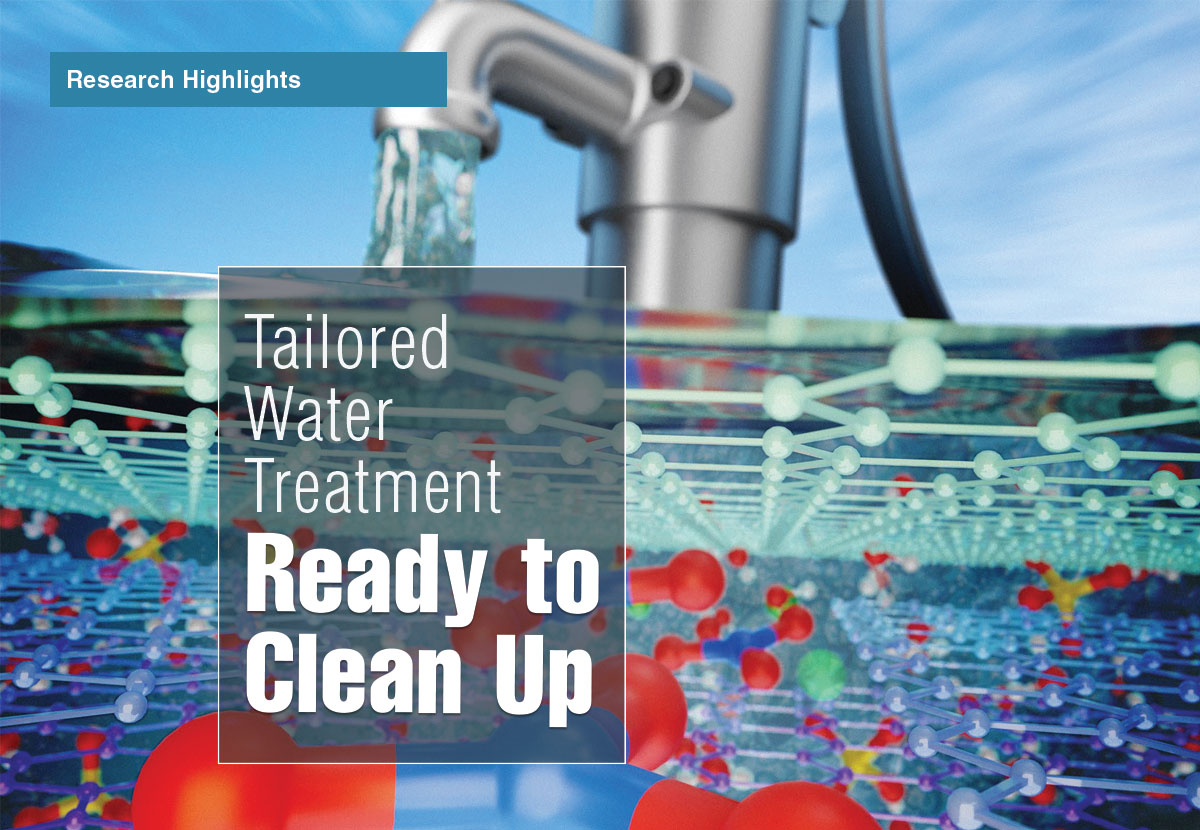 The carbon aerogel material used in Livermore’s Flow Through Electrode Capacitive Deionization (FTE-CDI) device is optimized for disk-shaped nitrate ions, represented in red and blue in the illustration.

A homeowner would not brick up her patio door, eliminating a natural light source and access to her garden, just to eliminate an ant infestation. Nor would she select furnace filters that required daily replacement to ensure clean air. Yet many water purification technologies on the market operate in similar all-or-nothing terms. To guarantee that treated water is free of targeted contaminants, reverse osmosis devices nonselectively remove almost all ions and other constituents from a water stream, even the calcium, magnesium, and fluoride ions desirable for taste and health. Ion-selective membranes and resins that bind specific ions for removal also require frequent disposal and replacement and can unintentionally remove beneficial ions as well.

Livermore scientists working alongside Stanford University researchers have made headway toward a new generation of tailored, reversible water treatment. The research team used an electrode of ultramicroporous carbon aerogel, an ultralight, high-surface-area material, for capacitive deionization (CDI), in which ions adsorb to the charged electrode surface, to selectively remove nitrate from water containing a mixture of contaminants. Device-scale modeling and atomistic-scale simulations indicated that Livermore’s Flow Through Electrode CDI (FTE-CDI) device can be tailored by tuning the electrode’s pore-size distribution to be selective for particular ions. The process is completely reversible, ending when electrodes are no longer charged.

Tuning for Environment and Industry

Selecting the contaminants a water purification system removes could simplify environmental cleanup and enable reuse of industry wastewater, saving operational costs and resources. Tuning a device to eliminate arsenic in well water or nitrate from agricultural water, for example, could be a scalable solution to boost availability of drinking water, particularly in disadvantaged areas of the world. Rare-earth elements could be extracted from geothermal water sources to provide new channels of materials needed in consumer electronics, health care equipment, and automotive catalysts. “We can tune this material to address a variety of selective removal applications,” says Patrick Campbell, a Livermore climate and security materials synthesis researcher.

Selectivity in Livermore’s FTE-CDI platform was first observed during a 2012 research project in which a porous carbon aerogel electrode used for CDI yielded faster, more efficient desalination than reverse osmosis. A remarkable feature struck the lead scientist, Michael Stadermann. “We observed selective removal of nitrate not only over ions of equal valence or charge, but also over divalent ions, which was unexpected,” says Stadermann. “Even in well water containing 10 times the sulfate and chloride of the nitrate portion, nitrate removal exceeded the other removal rates: 65% nitrate removal compared to 12% for chloride and 16% for sulfate.”

Stadermann and his team could not explain the preference for nitrates at the time. The opportunity to revisit selective ion removal, however, arose with the award of Laboratory Directed Research and Development funding to a new project led by Campbell. The project, which kicked off in 2017, zeroed in on nitrate removal using the same carbon aerogel electrode material Stadermann had studied earlier. The research team continued the focus on nitrates, observing that the concentration of nitrate in groundwater has increased in recent years due to industrial agricultural practices. Nitrate limits, regulated by the U.S. Environmental Protection Agency (EPA), gave researchers a clear target to measure success, with the goal of branching out to other ions in future studies.

Ultramicroporous carbon aerogel is the electrode material in Livermore’s FTE-DCI. The material, shown at high (top) and low (bottom) magnification, can be activated to achieve pore distribution suited to adsorbing specific ions.

The How and Why of Selective Removal

Properties of ions such as size, charge, mass, and mobility are factors in all ion separation options, and sometimes combine to make a technology ineffective. For example, a filtration material that excludes an ion based on membrane pore size may not differentiate between differently charged ions of similar size. The researchers set out to define characteristics that affect adsorption on the FTE-CDI material.

In the first phase, they validated an existing “continuum” operational model capable of computing the flow-through device’s performance with variable ion mixtures, flow rates, current, pH, and other factors by changing one characteristic at a time. Selectivities that the operational model could not predict were marked for evaluation in the next phase, calling on high-resolution, quantum-scale computer simulations. “The continuum model represents how the device performs, how it should be removing ions in an engineering sense,” says Campbell. “The quantum simulations in the next phase helped explain why the device performs this way, so we can deliberately tune the operation and optimize the electrode material.”

The second stage of the project called on Livermore’s strength in simulations of electrochemical interfaces, powered by high-performance computing, to investigate specific interactions of the ions and solvent with the carbon aerogel electrode. To accurately model how ion characteristics influence selectivity, the team combined ab initio or first-principles techniques and high-performance computing resources to perform quantum mechanical simulations. Quantum simulations determined the relationship of interfacial (electrode surface) capacitance, specific adsorption, and charge transfer on factors that determine selectivity, such as surface chemistry, confinement, and composition of the solution to be treated. “The quantum simulations leveraged Livermore’s high-performance computing resources and novel algorithms to describe the electrochemical operating environment with unprecedented realism and fidelity,” says Campbell. Livermore’s Brandon Wood and Tuan Anh Pham, both two-time participants in Livermore’s Computing Grand Challenge Program, supported the FTE-CDI team.

Information from the quantum mechanical simulations was incorporated into the bulk operational model to re-evaluate ion selectivity, this time considering more complicated ion mixtures. The combined approach created a multiscale modeling framework that integrated the strength of quantum methods with the scalability and flexibility of a classic physics model to simulate device operations.

In the case of nitrate, the team found that the solvated (acted on by solvents) ion takes on a flattened disk shape, which is a perfect fit for the aerogel’s natural pore structure. For this reason, nitrate adsorption is preferred when compared to other spherically shaped contaminants. “This was only revealed in the quantum simulations,” says Steven Hawks, a Livermore staff scientist on Campbell’s team, “The simple view of ion size would not predict selectivity, but the detailed simulation did. The modeling made the difference.” In CDI, selectivity can be achieved through a combination of the ion’s characteristics and the electrode’s pore-size distribution and chemical functionality. In follow-on research, the Livermore researchers demonstrated fully tunable monovalent/divalent ion selectivity based on pore-size distribution control. These results verified the team’s analysis and examination of nitrate selectivity and established that the research can be expanded for a range of results.

The weakly hydrated axial region around the nitrate molecule enables it to fit in the narrow, slit-shaped pores of the carbon aerogel electrode (a). Projection distributions indicate the asymmetrical solvation of nitrate in planes parallel (b) and perpendicular (c) to the plane of the anion. The color scale represents the spatial distribution factor—from low (0 - blue) to high (100 - magenta)—an indication of the relative density of the surrounding water.

Campbell and Hawks were accepted into Cohort 10 of Energy I-Corps, a Department of Energy entrepreneurial training program helping researchers build a business case for their emerging technologies through customer discovery interviews. The team believes that the technology is expandable to several water purity concerns beyond nitrates such as mineral buildup or scaling, water hardness, and industrial wastewater and recirculated process water treatment.

“We’re looking for the best application to enter the market,” says Campbell, “Answering the question, ‘Who is the first customer?’ tells us what ions we will target.” Stadermann, a past Energy I-Corps participant, understands the entrepreneurial challenge. “The team must match perceived need and willingness to purchase,” says Stadermann, “The problem of high nitrate concentration is widespread, yet the technology’s first customer is somewhat unclear at this time. The driver for commercialization may lie in another application, another ion.”