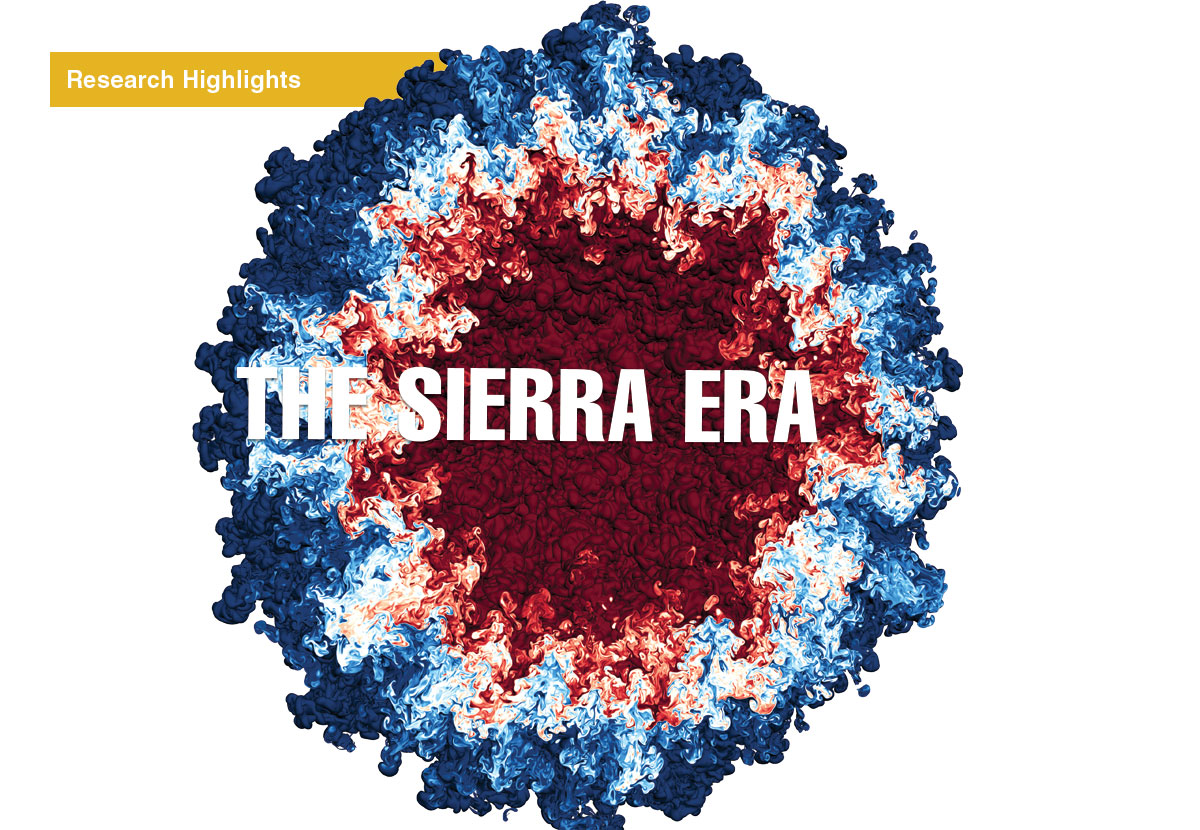 Sierra was formally dedicated in October 2018 and opened to NNSA users for classified work in the spring of 2019. Leading up to those milestones was a yearslong effort by CORAL—a collaboration of Oak Ridge, Argonne, and Lawrence Livermore national laboratories—and Livermore’s Sierra Center of Excellence to prepare applications for the first major heterogeneous system at the Laboratory (see S&TR, March 2015, Gearing Up for the Next Challenge in High-Performance Computing; and March 2017, A Center of Excellence Prepares for Sierra). Through CORAL, the Department of Energy (DOE) requested proposals for extreme-scale computing systems. After hardware vendors were selected, the Center of Excellence provided resources to modify Livermore’s large code base for execution on the new machine’s architecture.

Likewise, Sierra had to be optimized for DOE workloads. “We have been continuously engaged with HPC vendors to help steer development of future computing systems,” explains Chris Clouse, Livermore’s acting program director for Weapons Simulation and Computing. “Collaborating with other DOE laboratories helps capture vendors’ attention so they can appreciate the larger context of the country’s scientific computing needs.”

When the Sequoia supercomputer came online in 2012, it put Lawrence Livermore squarely in the petaflop (1015 floating-point operations per second) era of computing (see S&TR, July/August 2013, Reaching for New Computational Heights with Sequoia). It had taken a decade of computing innovations to achieve the factor of 1,000 gains in performance from the first teraflop (1012 floating-point operations per second) systems. All that extra computing power, and resulting computing gains over the last decade, have come at the expense of increased power demands. Looking ahead to the next generation of computers, Laboratory researchers knew a more energy-efficient approach would be needed. “Any extreme-scale machine must balance operating costs with computing performance gains,” says Clouse. “More powerful regimes cannot be achieved by simply scaling out current, heavyweight core technology. We need a new approach that offers an affordable electricity bill.”

Sierra’s advanced heterogeneous, or hybrid, architecture uses more than one type of processor or core. It combines 17,280 NVIDIA Tesla V100 (volta) graphics processing units (GPUs), which increase parallel processing power, and 8,640 IBM Power9 central processing units (CPUs). Clouse says, “Some parts of our large multiphysics applications simply will not run well on a solely GPU-based system.” Sierra’s GPU-to-CPU ratio helps balance the machine’s application workload. Sierra’s 100-gigabit-per-second network swiftly transfers data between these processors, and its memory capacity for data-intensive calculations reaches 1.38 petabytes. In comparison to other GPU-based machines at the Laboratory, Sierra also has significantly more high-bandwidth memory per processor. “Performance is heavily tied to the high-bandwidth memory associated with the GPUs. The more data we can fit into that type of memory, the better our codes will perform,” states Clouse. 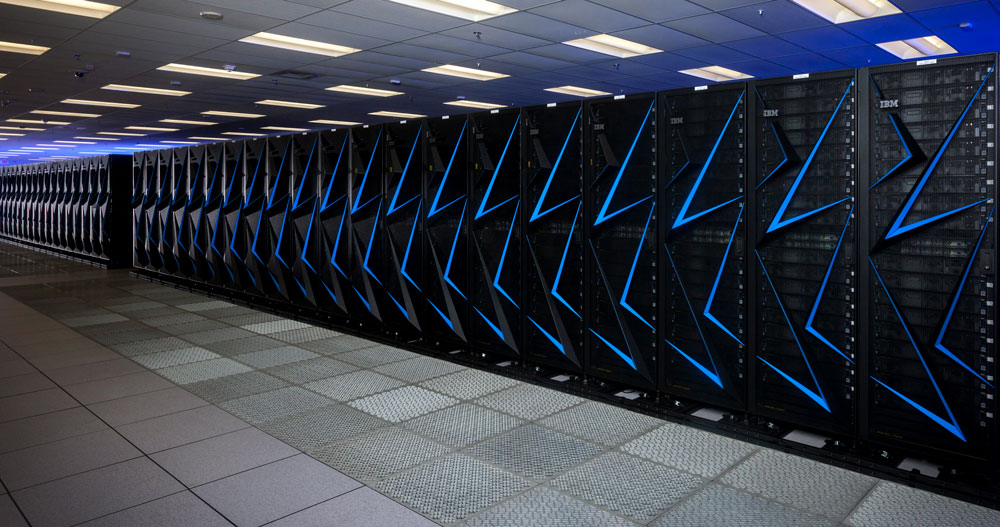 Sierra’s sophisticated architecture enables the machine to register a peak performance of 125 petaflops using only 11 megawatts of electricity. In other words, Sierra is six times faster than Sequoia but uses only one-third more wattage. Terri Quinn, associate program director for Livermore Computing, explains, “GPUs sip energy compared to traditional server processors. With leading HPC systems incorporating tens of thousands of processors and consuming multiple megawatts of power each year, GPUs keep power consumption in check, require a smaller footprint, and cost less than a CPU-only system of comparable performance—if you can take advantage of them.” (See Global Distinction below.)

According to Quinn, pursuing Sierra’s hybrid architecture was a difficult decision. She says, “The ASC teams have put in an extraordinary amount of effort, often with IBM and NVIDIA experts alongside, to ready our codes (which did not run on GPUs) for Sierra.” Clouse adds that NNSA has led the advancement of portability solutions for new architectures. He says, “Rather than completely rewrite these complex codes, we are working to make codes run well on a wide range of platforms with relatively small, isolated modifications.”

Livermore computer scientists and software developers explored numerous portability and optimization solutions during the years leading up to Sierra’s installation (see S&TR, September 2016, Laying the Groundwork for Extreme-Scale Computing). For example, new algorithms exploit data parallelism and memory access to help ensure that codes capitalize on GPUs. Novel tools combine simulation and visualization routines to maximize data processing while in memory, and innovative memory-management models automate data movement between memory locations with minimal disruption to the source code. Clouse adds, “Small parts of each code were ported over and optimized to the new system before the entire code was considered ready for Sierra.”

One key GPU-portability innovation is Livermore’s RAJA abstraction layer. Large multiphysics codes typically contain millions of lines of code and thousands of calculation loops. RAJA provides abstractions at the loop level, separating platform-independent and platform-specific code for streamlined execution. Many of Livermore’s production codes have adopted RAJA, and codes under development will include abstraction layers from inception. 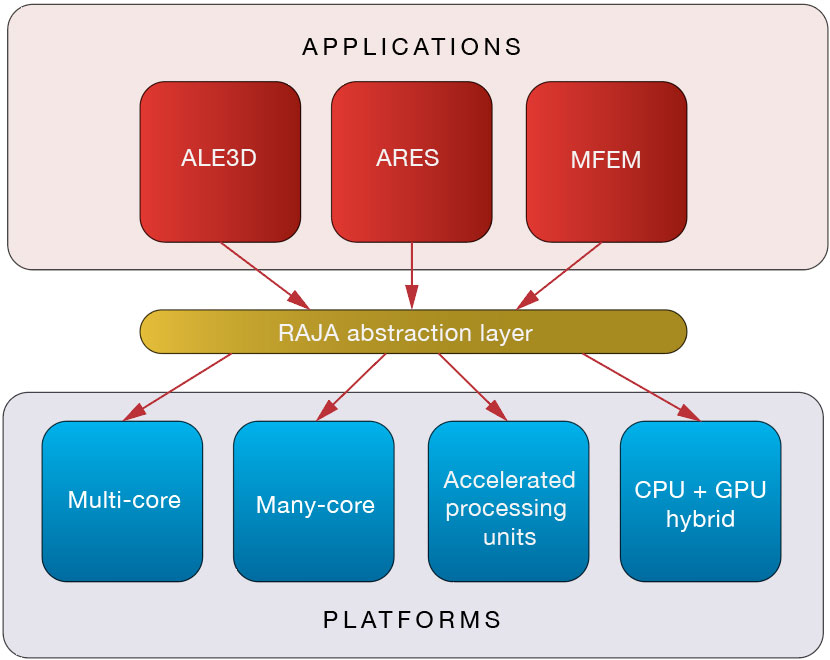 The Livermore-developed RAJA software abstraction layer systematically isolates machine-specific optimizations without disrupting the source code, enabling the latter to run on different platforms. For example, ALE3D and ARES are two of Livermore’s proprietary hydrodynamics codes, and MFEM is a high-order finite element library.

Memory-allocation tools, such as the Livermore-developed Umpire and CHAI (Copy-Hiding Application Interface), are crucial partners of abstraction layers. Memory movement between Sierra’s GPUs and CPUs is coherent, which means that both processor types share and communicate any changed values in memory regardless of which processor recorded the changes. Clouse elaborates, “In this setup, GPUs and CPUs remain in sync when they access data from memory.”

Tools such as CHAI and Umpire allow more control over Sierra’s memory allocations to improve its performance. “They also provide portability on machines that, unlike Sierra, do not guarantee memory coherence,” says Clouse. Together, abstraction and memory management simplify how codes run on Sierra. Programmers do not need to explicitly allocate data on GPUs because these software tools do it for them.

Clouse explains, “For many of our 3D applications, Sierra’s architecture brings speed-ups on the order of 5 to 20 times what our (older) commodity clusters can do. With its extraordinary resolution, we can begin replacing our daily 2D workload with 3D simulations.” In one example, Sierra produced a 3D inertial confinement fusion simulation in 60 hours compared with a 30-day estimate on Livermore’s multi-core CPU system, Sequoia. The resulting data set provides further understanding of turbulence models.

With Sierra, Livermore scientists are seeing significant impacts on programmatic work. For the W80-4 life-extension program, simulations run on Sierra help assess the warhead’s new and refurbished components in 3D (see S&TR, October/November 2018, Extending the Life of a Workhorse Warhead). In another effort, a research team runs machine-learning algorithms on Sierra to analyze data from simulations and experiments (see S&TR, March 2019, Machine Learning on a Mission). Researchers at NNSA’s other national laboratories, Sandia and Los Alamos, also use Sierra for stockpile stewardship applications. Quinn notes, “Users tell us they can run calculations they would never have dreamed of running before Sierra.” 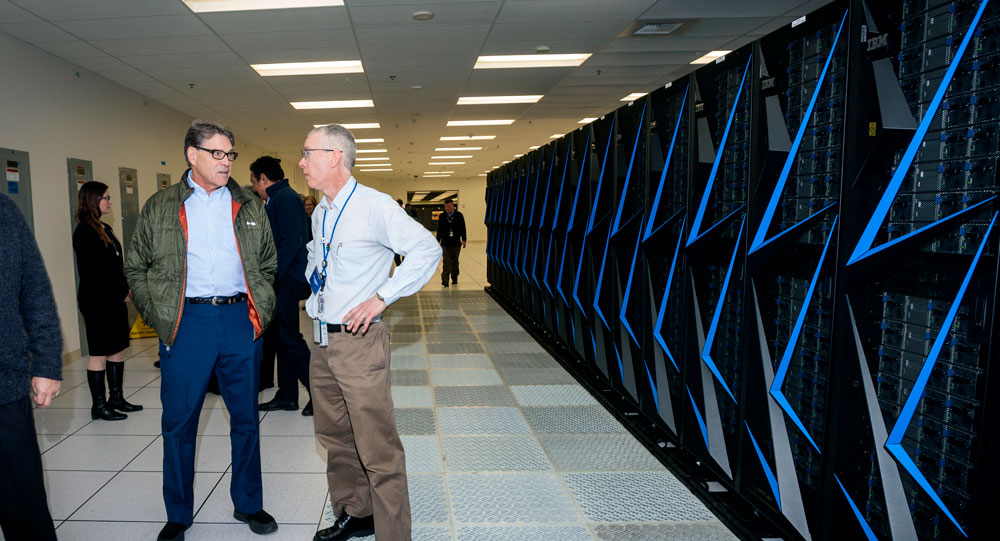 From Petaflops to Exaflops

Today’s fastest computing technologies will be considered slow tomorrow. In August 2020, DOE announced a partnership with Cray Inc. (now Hewlett Packard Enterprises), to build NNSA’s first exascale computer at Livermore. El Capitan is expected to come online in 2023 with a new peak performance standard of at least 1.5 exaflops, or 1.5 quintillion (1.5 x 1018) floating-point operations per second, ushering in the next factor of 1,000 gains in computing power. Clouse states, “El Capitan will also have a GPU-based architecture. Our portability and optimization work for Sierra will benefit us greatly when the time comes, but no doubt El Capitan will present unique challenges.”

Quinn points out that DOE’s first three exascale-class supercomputers—El Capitan, Argonne National Laboratory’s Aurora, and Oak Ridge National Laboratory’s Frontier—will use GPUs. She states, “GPUs are becoming more popular for scientific and engineering workloads, and I expect this trend to continue for the remainder of this decade.”