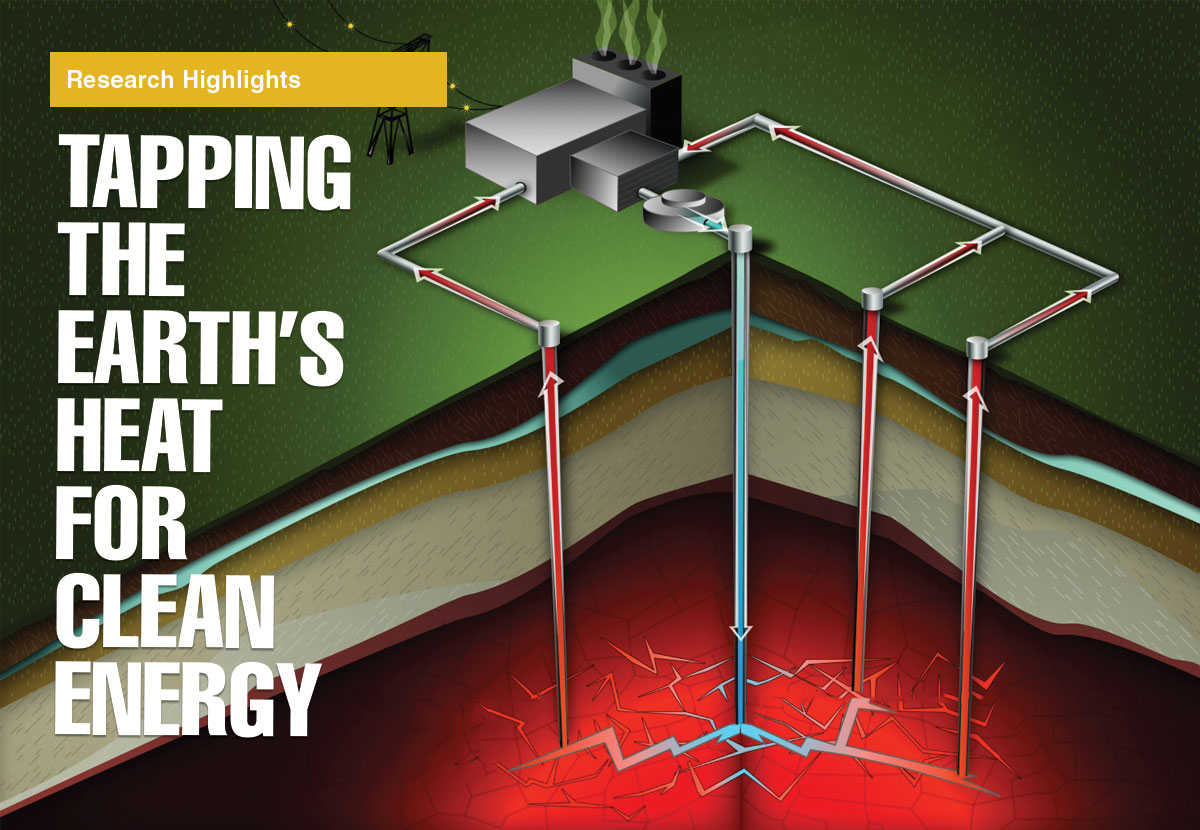 In an enhanced geothermal system (EGS), water is pumped underground through an injection well (blue pipe) into hot “basement” rock. Heated water and steam pumped back to the surface are used to propel turbines that generate electricity. The water is continuously recycled in a closed loop. (Image courtesy of the Department of Energy’s Geothermal Technologies Office.)

Deep in a tunnel at South Dakota’s Sanford Underground Research Facility (SURF), workers inject pressurized water through a 60-meter-long borehole drilled into the Earth’s interior. Within a couple of hours, the water migrates through rock fractures “stimulated” by the water’s pressure and returns, warmed by the rock, to another borehole drilled parallel to the first. Back in the tunnel, automated systems collect, process, and then transfer incoming data from an array of instruments to team members around the United States, who help monitor and analyze the experiment’s progress in real time.

As part of EGS Collab, Lawrence Livermore is lending its expertise in high-performance computing (HPC) to design experiments, build integrated data sets from observations, and perform simulations that compare experimental data to models of fluid-induced fracturing of the subsurface rock.

Some geothermal power plants, such as those at California’s Geysers Geothermal Field, generate electricity by tapping into hot water located in permeable, porous rock deep underground. The hot water and steam pumped to the surface from drilled boreholes propels turbines that generate power. The water can then be pumped back into the rock below to close the loop. However, most of Earth’s subsurface consists of relatively impermeable rock that contains plenty of heat but is not as accessible. 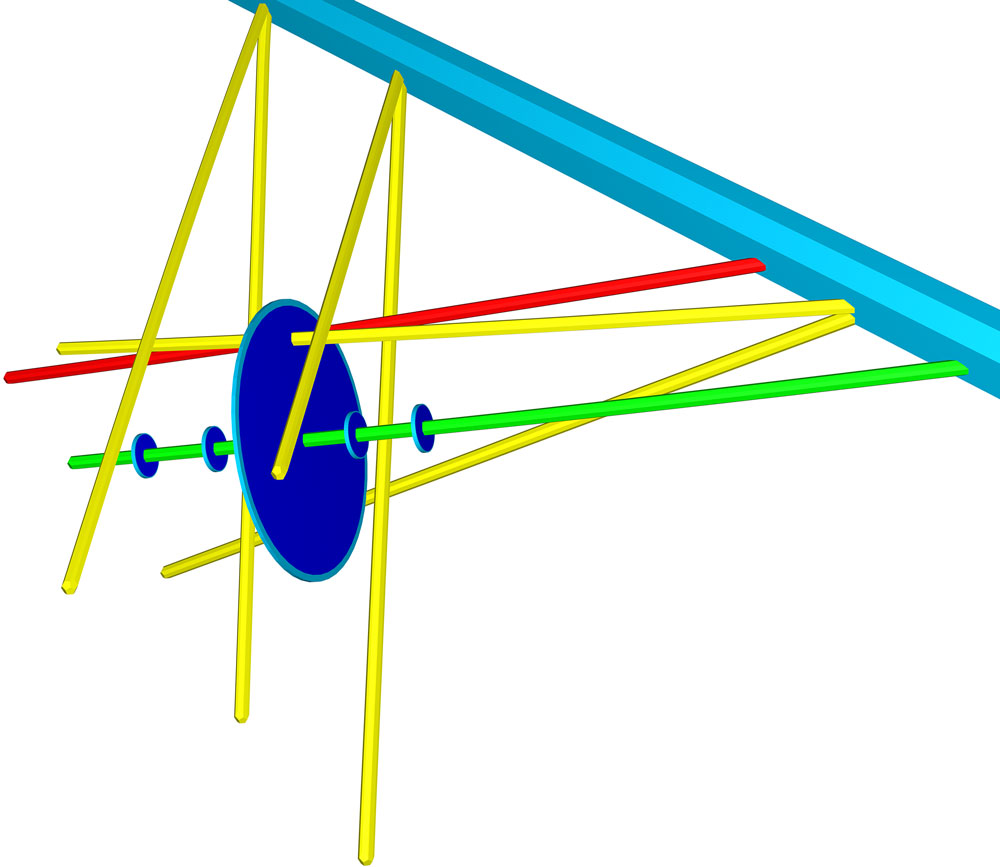 A schematic of EGS Collab’s first experiment illustrates the setup of the test. The light blue shaft (upper right) indicates the tunnel where the experiment took place. The green tube represents the injection well connected to the tunnel. As the water induces fractures (blue disks) in the surrounding basement rock, some of the water flows to the production well (red tube). Yellow tubes represent boreholes that have instruments for taking measurements of the experiment in real time.

In 2006, a study led by the Massachusetts Institute of Technology estimated that EGS could provide 100 gigawatts of cost-competitive electricity over the next 50 years and that the total amount of extractable energy from EGS reservoirs in the United States was about 2,000 times the nation’s annual total energy consumption. “It’s embarrassing to think of how much geothermal energy is sitting below us that we just can’t access,” says Joe Morris, associate program leader for the Laboratory’s Fossil Energy Solutions and Nuclear Effects Research and Development program areas.

EGS offers a method that could prove effective in liberating the energy stored in impermeable rock, by pumping cold water from the Earth’s surface through sufficiently hot basement rock located 3 to 5 kilometers underground. The pressure of the water from the injection well creates a network of induced fractures throughout the rock. As the water migrates through the fractures, it heats up, is pumped out of a recovery well, and then is transported to the surface to generate electricity. However, to make EGS an operational reality, researchers need to better understand and predict how a network of induced fractures forms in the rock as well as how fracture permeability changes as water migrates.

Experiments at SURF enable the EGS Collab team to compare and validate EGS reservoir models with experimental data to improve fracture predictions. Instruments placed within the boreholes collect acoustic, resistivity, and seismic data as well as measurements of water quantity, temperature, and flow rate. By combining these measurements, researchers can discern the orientation of the rock fractures and the direction of the water flow.

“This project is unlike any underground monitoring project I have worked on before,” says Morris. “We can monitor the progress of the experiment in real time, discuss incoming results, and even control the experiment remotely using videoconferencing and an information sharing platform.” Morris adds, “We can have the entire EGS Collab community engaged in figuring out the next step of the experiment at a single moment.” 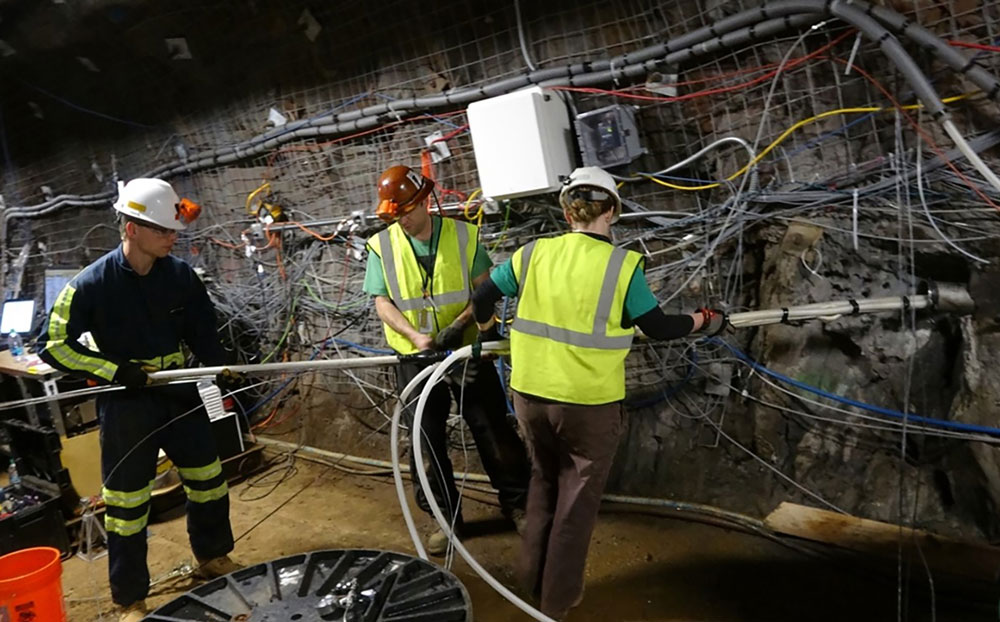 EGS Collab team members work together to add instrumentation for monitoring water injection through the borehole.

Material characterization of rock core samples also provides key information about critical aspects of the experiment. Livermore’s Megan Smith, deputy group leader for the Subsurface Transport Group, says, “The cores show preexisting faults, rock textures and composition, and other features. We can correlate our data with the appearance of the rock.” Using a wide range of analysis techniques, including computed tomography scans, the research team can study the lithology, composition, and fracture geometry of samples and take measurements of the rock’s elastic properties, magnetic susceptibility, gamma-ray intensity, chemical element ratios and abundance, sample microbiology, and seismic wave velocity.

Over the last few years, the EGS Collab team has made notable progress. In May 2018, the researchers achieved a hydraulic connection between the injection and recovery wells and observed, for the first time, the movement of water between the two. Later that year, the researchers circulated fluid through the fracture system continuously for one month and recovered more than 90 percent of circulating fluid for several days—a promising development as commercial-scale plants must continuously circulate and recover water through their EGS fields. In February 2019, the team began long-term test bed monitoring and conducted tracer tests, in which a harmless compound was added to the injected water to map its flow through the fracture system. A new set of experiments is planned during 2021.

Prior to experiments at SURF, Livermore’s Pengcheng Fu, acting deputy group leader of the Computational Geosciences group, used Livermore’s GEOS code to accurately model fracture initiation and growth. Livermore’s predictions of fracture propagation matched well with the experimental results. “Since the initial experiments, fluid recovery has been stable, and we’ve observed a rich set of flow system behavior that will be useful for future modeling,” says Fu.

The extensive geophysical measurements and recorded data pouring in help to constrain the models and reduce the level of uncertainty. “For example, we can measure fracture propagation direction, fracture interaction with the wellbores, and the temperatures and microseismic data, all of which confirm our maps of fracture orientations,” says Fu. “With this information, we can do near-real-time modeling of how the fractures propagate, supporting the project team on how the experiment should proceed.”

Simultaneously collecting many types of data, such as pressure, leak rate, and injection temperature (shown here from top to bottom), allows researchers to verify critical processes related to fracturing.

In one effort, Fu and Hui Wu, a postdoctoral researcher in the Computational Geosciences Group, combined chemical tracer data with HPC simulations to produce millions of fluid transport models of the water through the rock to determine which models were the likeliest match to the field data. The models revealed the role that the structure of the rock plays in fluid transport. This knowledge will be important to commercial EGS plant managers when determining where to drill recovery wells to maximize the flow of return heat.

Fu is organizing EGS Collab’s terabytes of data into easily used data sets on OpenEI, a publicly accessible data repository. He is presenting the information in ways that reveal the intrinsic connections between the many data types so that more researchers can interpret the data and contribute to scientific analysis. “We’re collecting all the data in one place and creating a derived product to push out to the user community,” says Morris. “The project has generated data from the subsurface of unprecedented completeness.” Looking forward, EGS Collab’s efforts may one day lead to an enhanced geothermal system that efficiently taps the Earth’s heat to produce clean, low-carbon-emitting power.