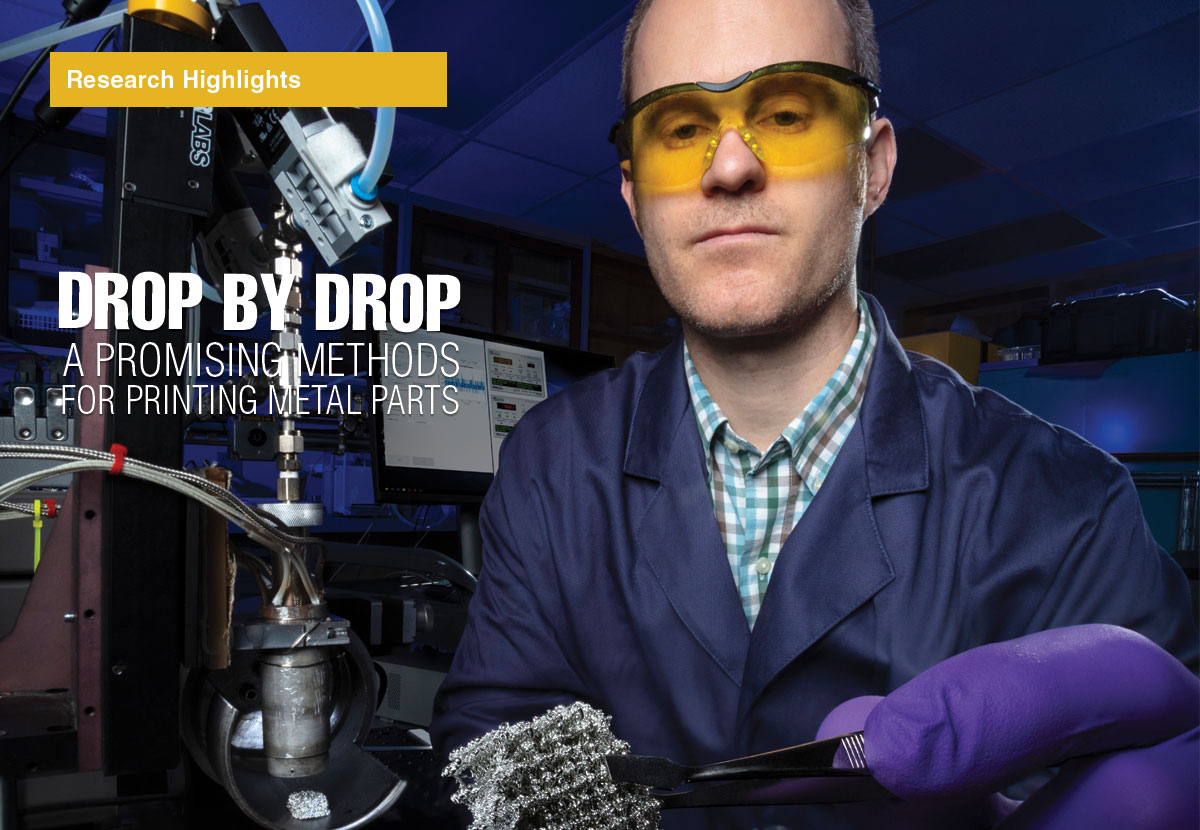 Drop by Drop: A Promising Method for Printing Metal Parts

Over the past decade, Lawrence Livermore researchers have been involved in a significant effort to develop advanced materials and manufacturing processes to meet the requirements of the National Nuclear Security Administration and the broader needs of the Laboratory as well as U.S. industry. Livermore scientists’ goal is to design and deliver materials and components with tailored properties on an accelerated schedule and at reduced cost, with a special focus on national security applications. The effort centers on a fast-growing technology called additive manufacturing or three-dimensional (3D) printing, a technique that builds precise parts in sequential layers thinner than a human hair. The resulting specialized materials and components offer previously unattainable shapes; interior structures; and mechanical, optical, and electrical properties not possible with traditional manufacturing methods.

In recent years, liquid metal jetting (LMJ) has been developed as an additive manufacturing process for producing 3D metal parts through the control of tiny droplets of metals heated to 2,000°C. The droplets fall onto a substrate to produce 3D parts from a stack of two-dimensional digital patterns. Upon solidification, each layer of jetted droplets acts as a new substrate onto which new droplets are dispensed to create the subsequent layer. As the process repeats, complex 3D geometries can be printed with extremely fine detail.

As an advanced manufacturing concept, LMJ is barely 10 years old—largely studied in universities and yet to make commercial inroads. Although in its infancy, LMJ offers Lawrence Livermore researchers an alternative to the more prevalent and commercial selective laser melting technique used to additively manufacture metal parts. In selective laser melting, a laser melts and fuses metallic powders, but this method has high equipment costs, requires specialized spherical metal powder feedstock, and may necessitate expensive safety infrastructures. In addition, the choice of metals is limited to commercial metals like steels or titanium alloys. As a result, 3D printing currently relies almost entirely on polymer materials, which often cannot duplicate the required properties of metals. 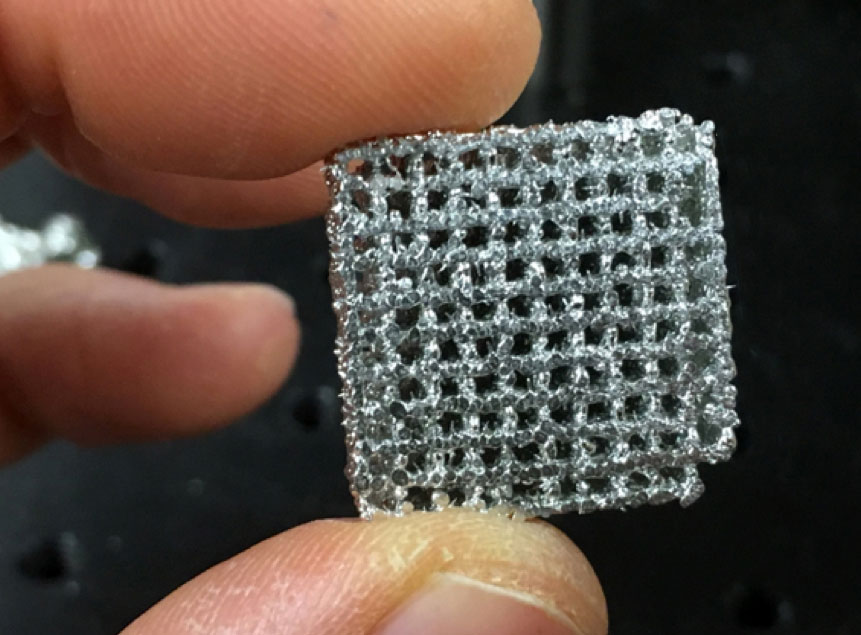 Livermore physicist Jason Jeffries explains, “Selective laser melting limits what metal feedstock can be used because many metals become highly reactive when they are converted to a powder.” For example, titanium powder exposed to air becomes flammable. “We get around that problem with LMJ,” he says. Furthermore, the use of fine powders can cause splattering, which may inadvertently contaminate a part, or the powder can get trapped inside a part and vaporize, resulting in an unwanted void in the finished build. “LMJ is a much gentler and more localized process,” says Jeffries. LMJ also offers cost advantages because it uses raw feedstock, bypassing the extra processing step of converting it into powder.

Jeffries leads a multidisciplinary effort to determine LMJ’s capabilities and analyze how its various components (including the nozzle that produces the molten metal droplets) affect the build speed and quality of parts. The team includes researchers in physics, materials science, mechanical engineering, and computational engineering. The team is also working with researchers at the University of Nottingham in the United Kingdom.

The dearth of commercial LMJ machines led the research group to build its own unit in 2018. The Livermore machine offers two printing modes: drop-on-demand (DoD) mode, which produces discrete droplets ejected from a nozzle, and a continuous stream mode that offers a way to build a part (or section of a part) faster but with less resolution than the DoD mode. “With a fast-streaming mode and a high-resolution mode, we don’t need two different machines,” says Jeffries. An object could be manufactured by combining both modes. Jeffries offers the example of printing a metal table: The table legs would be manufactured with the DoD mode, while the table top could be made using the continuous mode for a more rapid build without sacrificing quality.

The team is combining simulations and experiments to optimize printing objects with pure tin because of its low melting point, average viscosity, and average surface tension, which together make it an easy-to-work-with material. The largest tin part so far weighs about 100 grams. The builds use 1 to 5 grams per minute for individual tin droplets, and 10 to 15 grams per minute for continuous streaming.

Most of the effort has gone toward understanding and optimizing the DoD process, in particular examining the relationship between the machine’s operating parameters and the object’s resultant microstructure and physical properties. Jeffries says that most studies previously focused on the metal jetting head and analysis of molten metal droplets. However, very few previous studies have analyzed the relationship between microstructure and properties (structural strength, for example) of an LMJ-made part.

During the DoD process, metal is heated to between 30 and 50 degrees above its melting temperature. Tin melts at 232°C, so the droplets are heated to around 260°C. Droplets measure 300 micrometers in diameter and their size is dependent upon the size of the nozzle orifice. During the printing process, 100 droplets per second are ejected with a velocity ranging from 0.2 to 1.5 meters per second. The distance from the nozzle to the starting build plate varies between a few millimeters to a centimeter.

As the droplets descend, the substrate moves back and forth (the nozzle stays in a fixed position) to accommodate deposition of discrete layers. Modeling indicates that the larger droplets cool little during flight before impacting the underlying stainless steel substrate or a previously applied layer. (However, there is a risk that droplets can freeze as they descend if they are too small.) Upon impact, droplets cool within tens of milliseconds. The build plate is typically made of stainless steel so that the finished part can be removed easily. If desired, droplets forming the first layer can stick to a build plate made of identical material as the feedstock metal. It takes just a couple minutes to build the smallest parts and up to 20 minutes for the largest parts.

The research is guided by simulations that model droplet ejection, flight, and deposition to optimize the as-built part. The simulations show, for example, that aspherical droplets can be caused by the material cooling at the nozzle’s exit, an effect that alters the resolution of the final part. The simulations also help the researchers determine how much of the underlying structure should melt from the drop above it. “We want the molten drop to bond to the metal underneath it, and not just physically rest upon it,” says Jeffries.

According to Jeffries, controlling the cooling rate of the microstructure is necessary to attain optimal mechanical properties. Otherwise, voids in build formation, unwanted phases (orientations of atoms in a crystalline lattice), dislocations (atoms out of place), various artifacts, and high residual stress can occur. The cooling rate can be controlled by modifying the droplet ejection velocity, size, and frequency, or the substrate temperature. Toward that end, Livermore researchers have studied the operation of the liquid metal reservoir, nozzle, and the pneumatically driven pressure pulse that sequentially forces droplets from the nozzle.

The team has produced a number of small tin parts and then examined their internal structures through a combination of roughness, density, and x-ray diffraction (XRD) measurements. The microstructures of the tin pieces have shown minimal stored strain or deformation, low to no voids, and only the most common phase (the same phase as the feedstock tin). The parts exhibit characteristics identical to metal parts produced by conventional machining or casting–techniques used for many decades. 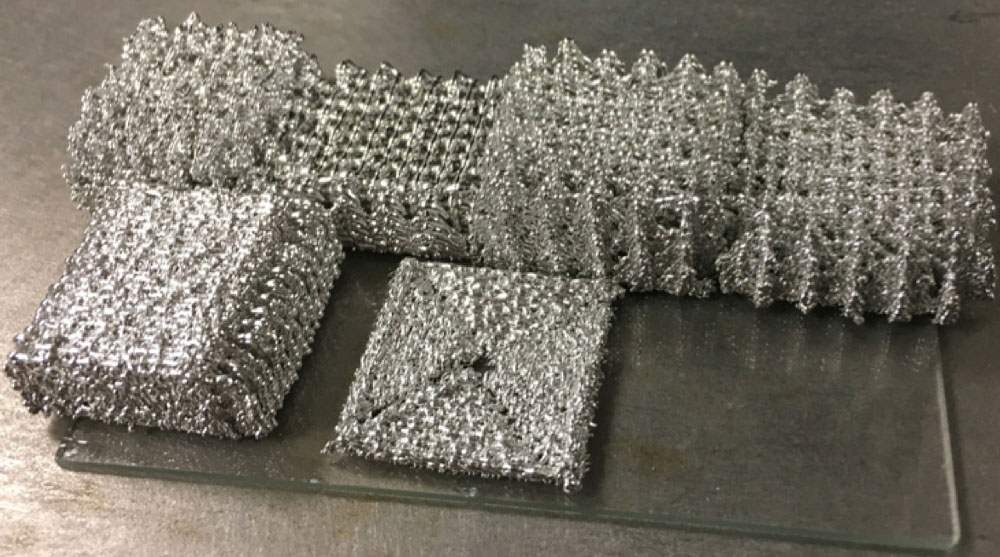 LMJ-manufactured tin parts (all measuring about 3 centimeters to a side) are examined using a combination of roughness, density, and x-ray diffraction measurements. The parts’ microstructures have shown minimal stored strain or deformation and exhibit characteristics identical to metal parts produced by conventional machining or casting.

“We are building a foundation to seed programmatic investments,” says Jeffries. Team members have made presentations to national subject matter experts and have received valuable feedback. He says the team’s work may prove critical for nuclear stockpile stewardship because of the limited availability of certain manufacturing technologies and materials or the prohibitive costs involved.

As the work progresses, interest is growing at the Laboratory for using LMJ for national security applications, where the ability to print inexpensive metal parts is needed. These parts will also have unique attributes such as varying metal matrices and functionally graded materials, features that are not possible with conventional machining or casting or current 3D metal printing. “We’re showing LMJ works,” says Jeffries. “We haven’t overcome all the problems, but we’re making important progress.”