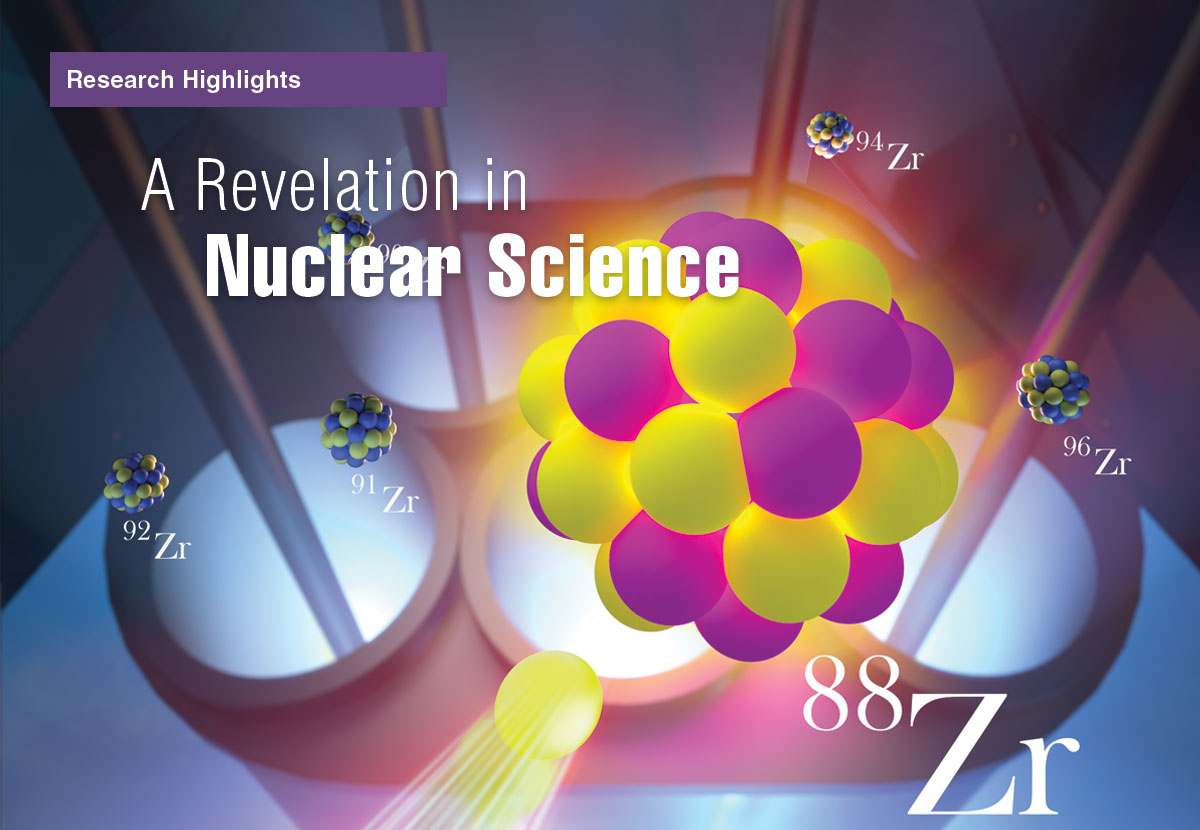 An artist’s rendering depicts a zirconium-88 (88Zr) isotope about to absorb an incoming neutron. (Rendering by Adam Connell.)

A Revelation in Nuclear Science

When it comes online in 2022, the Facility for Rare Isotope Beams (FRIB) at Michigan State University (MSU) will give scientists an unprecedented capability to produce and “harvest” rare, or exotic, isotopes—highly unstable nuclei that are not typically found on Earth. Such investigations are essential to better understand fundamental nuclear science and could give rise to new applications in areas ranging from astrophysics to national security.

In anticipation of FRIB, scientists are conducting preliminary experiments at established accelerator facilities, including MSU’s National Superconducting Cyclotron Laboratory (NSCL). At this facility, beams of heavy ions are accelerated toward and collide with a target material. The collisions cause the nuclei in the ions to break apart, shedding neutrons and protons, and the resulting nuclear fragments yield different types of radioactive isotopes. Many nuclear scientists are interested in searching for the limits of nuclear stability by studying isotopes with the greatest neutron-to-proton imbalance, but researchers are also looking into how to collect the copious other products for basic and applied science research. “For each extremely exotic nucleus that is created, vast quantities of long-lived radioactive nuclei are also produced,” says Livermore nuclear physicist Nicholas Scielzo.

In an experiment conducted at NSCL in 2018, Livermore researchers, in collaboration with several university partners, successfully used a water-based harvesting apparatus to collect zirconium-88 (88Zr) atoms, which under normal operations would have been “filtered out” from the more exotic products. Scielzo, who leads the Livermore research team, says, “We are developing the techniques needed to harvest isotopes such as zirconium-88 that are closer to stability, and we are demonstrating that these harvested samples can then be used for direct neutron-capture measurements.”

An isotope’s neutron-capture cross section—the likelihood that a nucleus will absorb a neutron—is important to many scientific processes, such as the forging of elements in the cosmos, and to applications of nuclear science spanning reactor performance, nuclear medicine, and stockpile stewardship. Although cross sections have been established for most stable nuclei, almost no data exists for radioactive isotopes, including 88Zr, which serves as an important radiochemical diagnostic for nuclear security applications. In pursuing this data, nature handed the research team an incredible surprise: the second largest neutron capture rate ever measured. 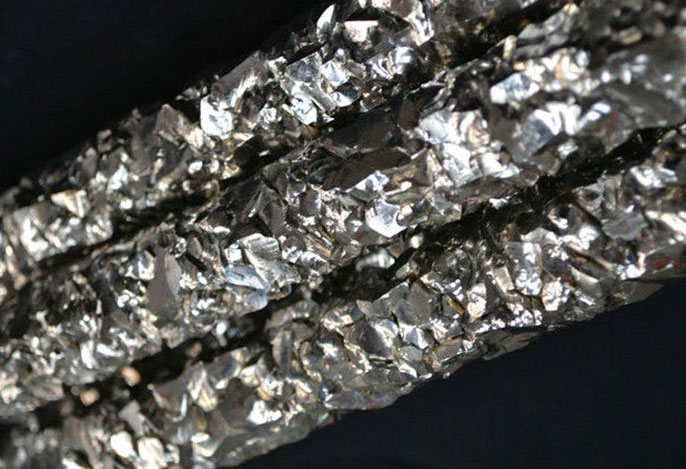 Livermore scientists, in collaboration with university partners are studying ways to harvest rare isotopes, including a radioactive isotope of the element zirconium.

The team’s initial harvesting experiment at NSCL yielded a single, purified, irreplaceable 88Zr target for subsequent cross-section experiments. “Typically, at least 1017 atoms are required to create a target that is sufficient for cross-section measurements,” says Scielzo. “With stable isotopes, gathering this amount is trivial, but with radioactive isotopes it becomes much harder to amass enough atoms with sufficient purity.” With only one chance available at NSCL to conduct cross-section measurements on their harvested 88Zr target, Scielzo and his team turned to the University of Alabama at Birmingham (UAB) to produce practice samples for preliminary tests.

Former Livermore postdoctoral researcher Jennifer Shusterman, played a central role in the project’s success by preparing and purifying the samples before and after the tests. (Shusterman is now an assistant professor at Hunter College in New York.) At the UAB Cyclotron Facility, targets were produced by bombarding a high-purity yttrium target with protons. Extensive chemical separation processes and analysis of the irradiated target followed to ensure the purity of the final 88Zr samples, which were then shipped to the University of Missouri’s Research Reactor (MURR).

Zirconium-88 has a well-defined gamma-ray signature, which appears at an energy of 393 kiloelectronvolts (keV) following its decay. When 88Zr absorbs another neutron, it becomes zirconium-89 (89Zr), which has its own gamma-ray signature at 909 keV following decay. The distinction between the two signatures makes the neutron-capture transition straightforward to measure. At MURR, the purified samples were bathed in a huge number of low-energy thermal neutrons, which are especially suited for the 88Zr to 89Zr transition. The samples were irradiated for two days, then prepared and shipped to Lawrence Livermore for analysis.

The team expected to record a tiny fraction of the 88Zr atoms transforming into 89Zr using gamma-ray spectroscopy techniques, and then refine their measurements in preparation for the upcoming experiment at NSCL. Based on calculations, Scielzo anticipated the cross section to be about 10 barns—the unit that measures how many atoms undergo neutron capture—so that only about 1 out of every 10,000 88Zr atoms should be transmuted. Instead, after 48 hours inside MURR, the decay counting back in Livermore seemed to indicate that the 88Zr decay signature had completely disappeared and had been replaced by a strong 89Zr decay signature. In other words, results seem to indicate that almost the entire sample had transformed into 89Zr. “In most experiments, we expect our predictions to be in the right ballpark,” says Scielzo. “This time, it appeared we weren’t even in the right continent.”

When it Doubt, Try, Try Again

In Livermore, nuclear physicists and radiochemists alike were skeptical of the results. “Our first response was to question what had gone wrong,” says Scielzo. “We asked ourselves whether it was possible that all the zirconium-88 leaked out somehow, or if the sample could have been contaminated by something else masquerading as zirconium-89.” The team knew they had to repeat the experiment to verify the data.

After new material was made at the UAB Cyclotron Facility, the team sent seven identical 88Zr samples back to MURR to be irradiated. The first was removed after 5 minutes, the second after 15 minutes, and the third after an hour. Four more targets were removed at intervals up to 48 hours, and all seven were immediately shipped back to Livermore to be analyzed. Since 89Zr has a half-life of only three days, any delay in shipping would compromise the sample.

Once again, analysis revealed that the gamma-ray signatures of this second group of samples showed a normal, if extraordinarily productive, progression of neutron-capture reactions transmuting 88Zr to 89Zr. The longer the sample was bombarded with neutrons, the larger the fraction of atoms that were converted. The results confirmed that the cross section was not anywhere near 10 barns, but instead 850,000 barns. Lawrence Livermore and its collaborators had stumbled upon the second-highest neutron-capture cross section ever seen. (The record holder for highest neutron-capture cross section belongs to xenon-135, a short-lived fission product that influences the performance of nuclear reactors.) Says Scielzo, “Through these tests, we confirmed that this unexpectedly high cross section was in fact the result of physics and not just some mistake we made in the experiment.” 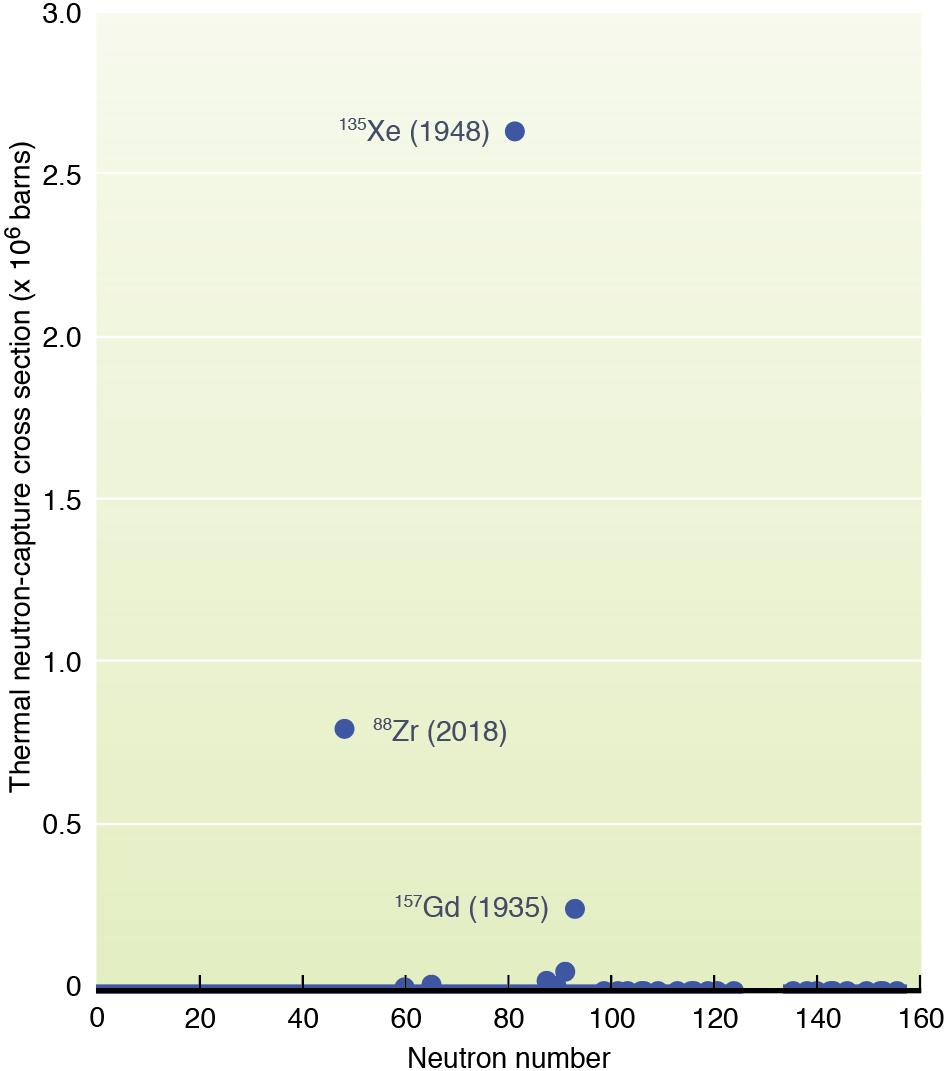 This work provides yet another example of how multidisciplinary science in action yields fruitful results. Along with Scielzo, Shusterman, and their university colleagues, other Livermore team members include nuclear chemist Dawn Shaughnessy, physicist Keenan Thomas, and nuclear physicist Anton Tonchev. “The overall collaboration between chemists and physicists was pivotal to this project,” says Scielzo. “The physicists could not have performed the chemistry work needed to prepare and isolate the 88Zr samples, and the radiochemists benefited from the experience of the physicists in measuring cross sections.”

Scielzo notes that since the two highest neutron-capture cross sections ever recorded are for radioactive isotopes, many more interesting revelations may come to light as scientists perform experiments with advanced capabilities such as FRIB. Radioactive isotopes are notoriously difficult to study, and this unexpected finding highlights how little is known about the interaction of radioactive isotopes with neutrons. “To have a cross section of this size depends upon finding an isotope with the right nuclear state at exactly the right energy,” says Scielzo. “We won the nuclear lottery with zirconium-88.”

Recently, the research team conducted its long-awaited experiment on 88Zr at NSCL and began analyzing the results. With FRIB’s imminent completion, the researchers are looking forward to the production and harvest of many exotic, radioactive isotopes and their potential in future applications. According to Scielzo, FRIB offers the opportunity to rectify the long-standing gap in understanding reactions of radioactive nuclei needed to improve our knowledge of the origins of heavy elements and to measure nuclear data required for high confidence in the safety, security, and effectiveness of the U.S. stockpile. 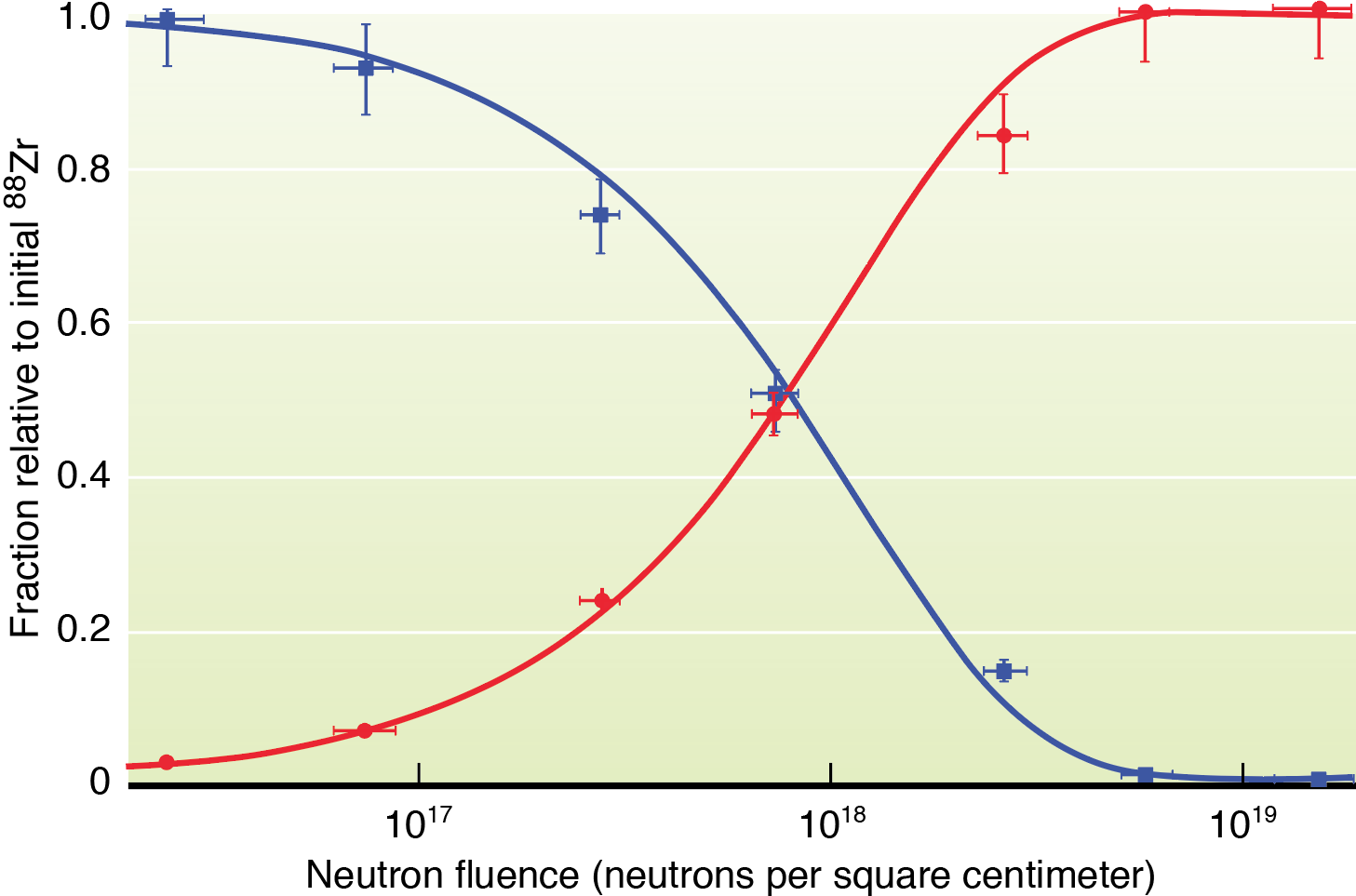 The populations of 88Zr (blue squares) and zirconium-89 (89Zr, red circles) as a function of neutron fluence—the total number of neutrons that passed through a unit area—were measured following irradiation of the initial 88Zr sample. The blue and red solid lines show the corresponding fitting curves, from which the neutron-capture cross section was determined. As indicated, with exposure to neutrons, the 88Zr atoms were rapidly transmuted to 89Zr.

The success of this team is twofold. The researchers effectively demonstrated that enough radioisotopes can be harvested from experiments to create targets for further scientific research and proved the follow-on research could yield significant dividends. Nature still has secrets to reveal, and eager scientists are looking forward to many more surprises.