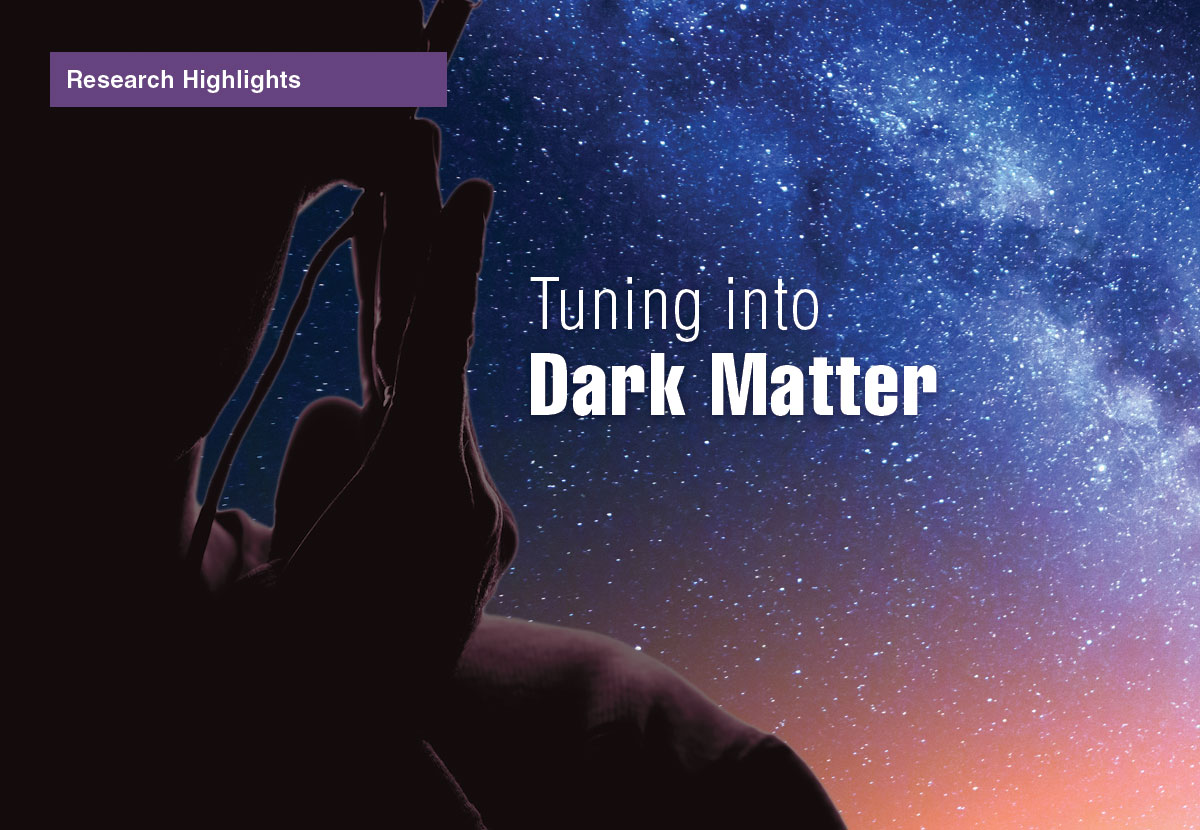 I n the 1930s, Swiss astrophysicist Fritz Zwicky posited that aninvisible substance was responsible for the unobservable mass in galaxy clusters that kept them from breaking apart. Deemed “dark matter,” this substance consists of mysterious particles that emit no light and have an unspecified form, providing scientists with the monumental challenge of proving it exists. Even now, decades after Zwicky’s discovery, astrophysicists have yet to directly observe dark matter or determine its composition.

To help solve the mystery, Lawrence Livermore researchers, in collaboration with colleagues at the University of Washington, Fermilab, Los Alamos and Pacific Northwest national laboratories, the University of Florida, Washington University in St. Louis, the University of California (UC) at Berkeley, and a few international institutions, are searching for the axion—a low-mass particle that could make up the majority of dark matter. Funded by the Department of Energy’s Office of Science, the team has developed a novel particle detector, called the Axion Dark Matter Experiment (ADMX), to identify axions’ decay into microwave-frequency photons in the presence of a strong magnetic field, thus providing a measurable signature. (See S&TR, January/February 2015, Investing in Early Career Researchers.) 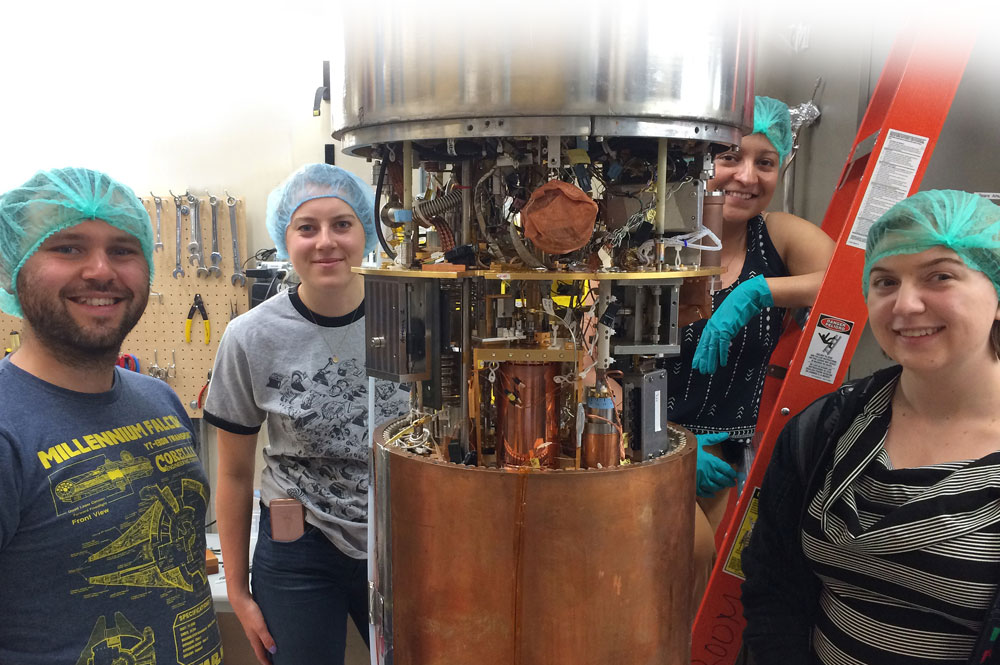 The Axion Dark Matter Experiment (ADMX) uses a haloscope that consists of a largediameter solenoid magnet with a copperplated, frequency-tunable microwave cavity at the center. Pictured with the device are team members (from left) Nathan Woollett, Jenny Smith, Rakshya Khatiwada, and Sophia Schwalbe. (Photo by George Kitrinos.)

A Whisper in a Rock Concert

Scientists hypothesized the plausible existence of the axion while trying to solve a different particle physics problem. A neutron, which is a composite particle of three quarks with positive and negative charge, should exhibit some charge separation that presents as an easily measured dipole moment. Instead, the scientists measured no dipole moment. Follow-on experiments indicated that the maximum dipole moment would be at least 10 orders of magnitude smaller than expected, leading scientists to theorize that the field of a hypothetical particle, dubbed the axion, was affecting that value. The axion’s predicted characteristics—ability to couple with photons, rare interactions with regular matter, and extremely light mass—coincidentally matched those of potential dark matter.

If axion particles decay into photons as scientists expect, the interaction would produce a tiny but detectable signal in the form of a microwave. In nature, this process would be nearly impossible to detect—the half-life of an axion would be greater than 1050 years. However, in 1983, theorist Pierre Sikivie of the University of Florida suggested an experimental method to boost the axion’s signal. The proposed axion “haloscope” uses an extremely strong magnet, essentially a dense field of photons, to stimulate the axion decay to detectable levels.

Several proof-of-concept haloscopes were built to demonstrate the technique, and the official ADMX detector was built at Lawrence Livermore in the early 1990s. ADMX consists of a large-diameter solenoid magnet with a copper-plated, frequency-tunable microwave cavity at the center. “Our technology is effectively an ultrasensitive AM radio,” says Gianpaolo Carosi, a Livermore staff physicist and co-spokesperson for the ADMX effort. “The axion signal is similar to an extremely weak radio wave. It’s so faint that it doesn’t couple to ordinary antennas, so we have to amplify the signal to hear it.”

ADMX uses an 8-tesla magnet to stimulate the decay of axions into photons. (For comparison, the Earth’s magnetic field is only 10 to 65 microteslas.) The microwave cavity contains two tuning rods. Scientists move the rods on axles from the edge of the cavity to its center so they can “tune in” to the relevant frequencies in which they believe axions exist. To ensure the fidelity of the detector, scientists periodically inject radio signals with the same expected power as the axion. The haloscope’s automatic algorithm detects the synthetic signals, which helps to calibrate the system and verify its functionality. 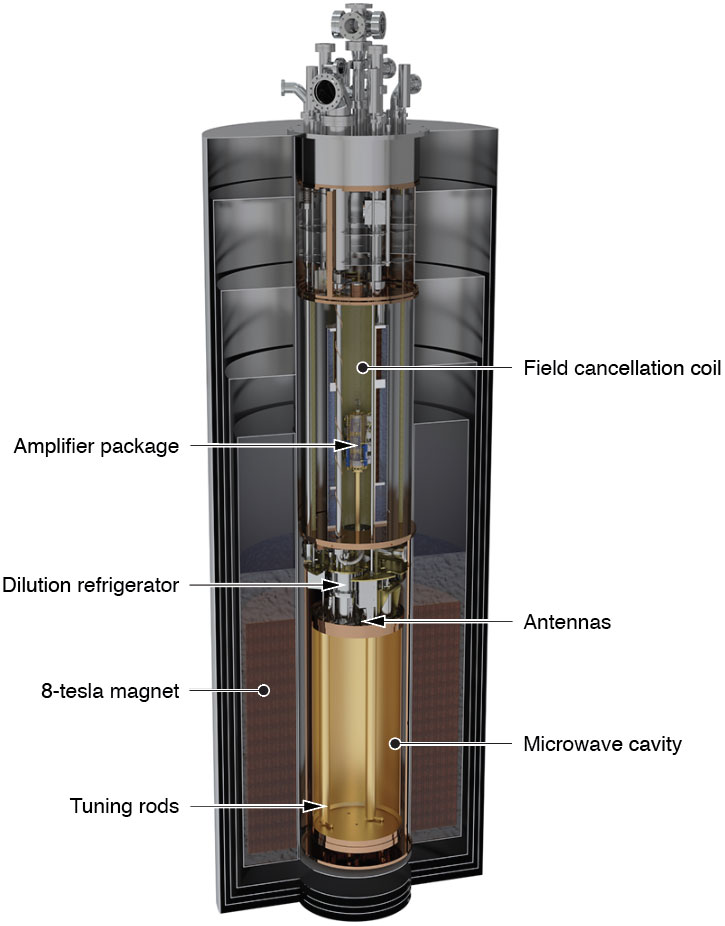 A rendering of the ADMX detector’s interior highlights its many components, which are stacked into a several-meters-long instrument. (Image courtesy of the ADMX collaboration.)

Scientists have made an educated guess about the frequency range of axions using various clues provided by astrophysics. “Observations of motion in the galaxy allow us to approximate the amount of dark matter that exists and how it is moving around in the universe. Since axions are bound in the galaxy, the width of the signal (through added kinetic energy) can’t be broader than 1 or 2 kilohertz for an axion that converts to a 1-gigahertz photon,” says Carosi. “The frequency range is based on the assumption that the axion forms the majority of dark matter. If we don’t detect the axion, then the particle is not likely the primary source.” 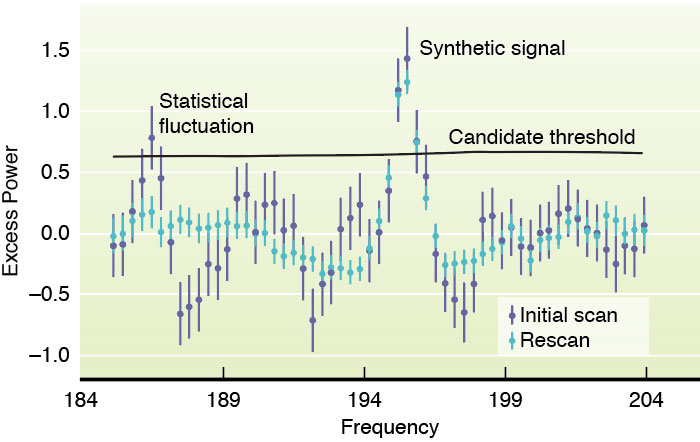 An initial scan of ADMX data (purple markers) showed two frequency regions with excess power above a set threshold, indicating potential axion candidates. A subsequent rescan (blue markers) clarified that one candidate was a statistical fluctuation, while the second candidate was the result of a purposefully injected tone acting as a synthetic axion signal.

Recent technological advances have helped the research team reach a point where finding the axion is just a matter of time. “Part of the challenge, and the reason why this experiment has taken decades to accomplish, is the instruments we use produce heat and background noise that can cover up the signal we’re trying to measure,” says Carosi. Counteracting thermal interference from the cavities is straightforward—scientists incorporated dilutional refrigerators into the system that cool it to around 100 millikelvins—but mitigating the background noise produced by the amplifiers proved a bigger challenge.

UC Berkeley professor John Clarke revolutionized the search for axions when he developed a microstrip superconducting quantum interference device (SQUID) amplifier that drastically reduced the thermal noise in the cavity. (See S&TR, December 2018, Livermore Leaps into Quantum Computing.) Previous transistor-based amplifiers only reduced the thermal noise to temperatures around 2 kelvins, but quantum amplifiers can reduce it close to the quantum limit—around 50 millikelvins at 1-gigahertz frequency. The current ADMX system uses both SQUID and Josephson parametric amplifiers to boost the signal to detectable levels. These modifications have enhanced the system’s effectiveness so that if axions are found, their signature will be unmistakable.

The team is now scanning the first frequency range (between 0.6 and 2 gigahertz), eagerly anticipating the detection of an axion. While they collect and analyze the incoming data, the researchers continue to make additional system improvements using a “sidecar” testbed cavity—an endeavor led by Livermore scientist Nathan Woollett. The sidecar is installed right above the main ADMX cavity, which allows scientists to test new technologies within the main ADMX system without affecting the experiment. Sidecar testing has resulted in multiple advances, including a piezoelectric actuator for moving the tuning rods that is simpler and more compact than its predecessor. The team is also testing a two-cavity design that would boost the detectable frequency range for the next ADMX data run, as well as other improvements such as modifying the shape of the cavity itself to enhance its resonance. 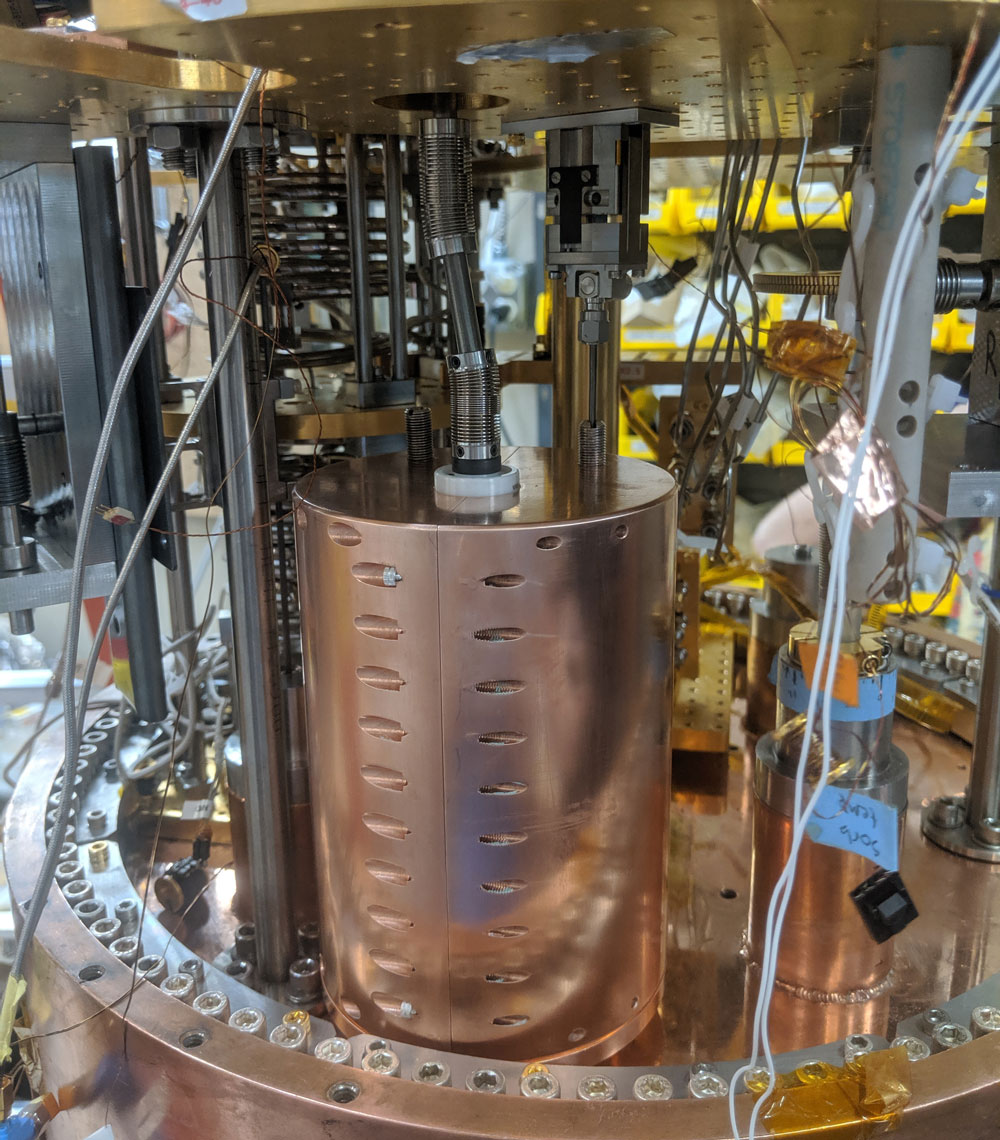 The ADMX sidecar cavity allows scientists to test improvements to the ADMX system in situ without affecting the main experiment.

Since the sidecar is connected to ADMX and runs simultaneously, it has the potential to discover new particles in a different frequency range than the main system. “The sidecar cavity is unique—although it’s not sensitive to the standard axion, it is sensitive to axion-like particles, which could provide a brand-new particle result,” says Woollett. 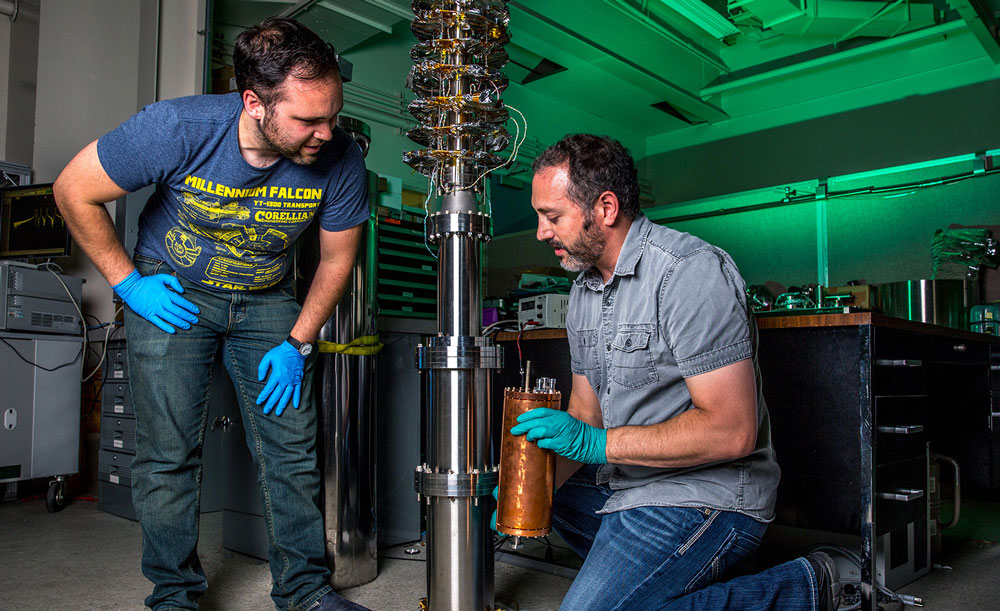 Livermore scientists Woollett and Gianpaolo Carosi work on the cryostat system in which the test microwave cavity (copper cylinder) will be placed. (Photo by George Kitrinos.)

ADMX will test millions of frequencies across multiple data runs in the coming years. If the axion is detected, this team would be the first to prove the existence of dark matter—a groundbreaking achievement—and set the stage for seemingly boundless investigations into the axion’s properties. Such an achievement would also open the door to new exploration. Carosi says, “We could learn how the galaxy is made, see which direction dark matter is going, and maybe even find useful applications for navigation…the possibilities are tremendous.”