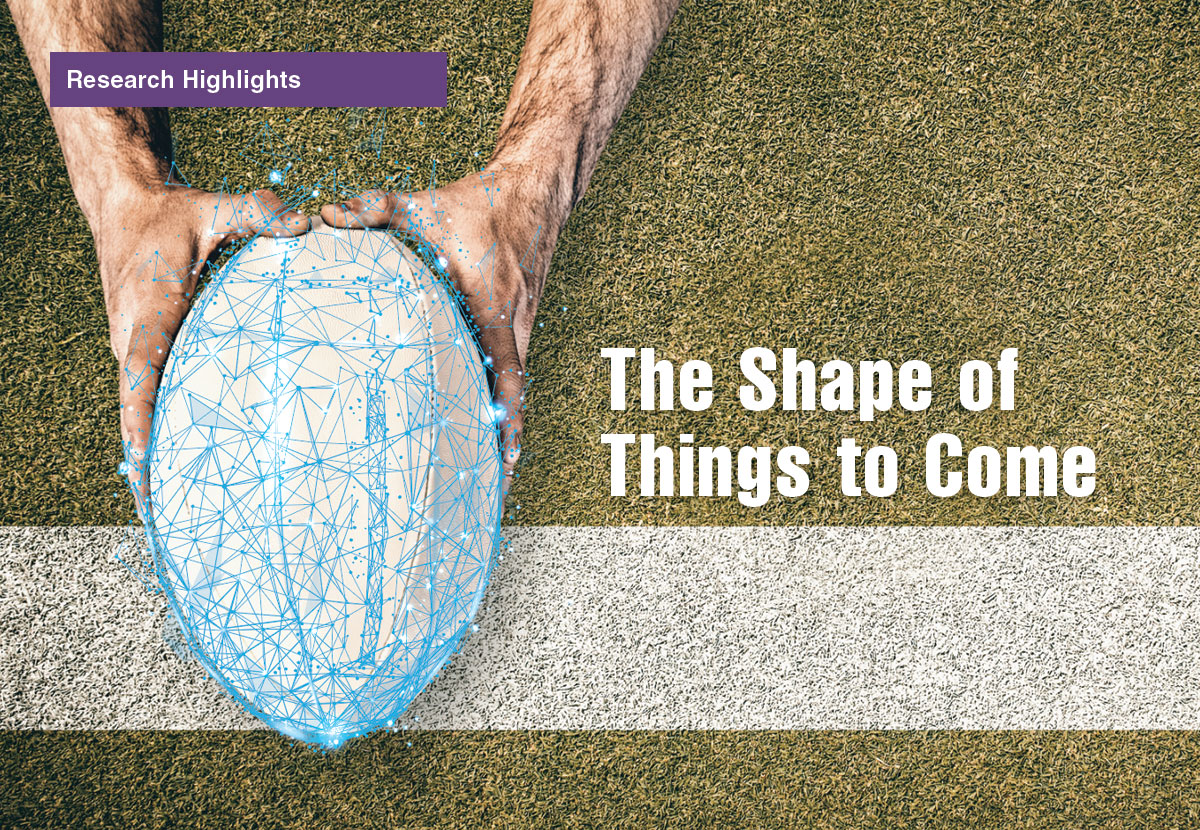 The Shape of Things to Come

In indirect-drive ICF experiments, NIF’s 192 high-power laser beams are used to heat and compress a deuterium–tritium (DT) fuel capsule seated inside a cylindrically shaped device called a hohlraum. The beams enter through holes on either end of the hohlraum, strike the cylinder’s inner walls, and generate a bath of x rays. The x rays converge symmetrically on the capsule, which implodes, heating and compressing the DT fuel into a central hot spot, wherein fusion begins.

Over the years, innovative and pioneering NIF researchers have continued to advance the ICF effort, seeking improvements in all aspects of the experiments, from target design to data acquisition and analysis. Now, scientists are turning their attention to how changes to the hohlraum could further improve target performance, sparking new optimism in efforts to create a star on Earth—an achievement that could open the door to nearly limitless energy production. 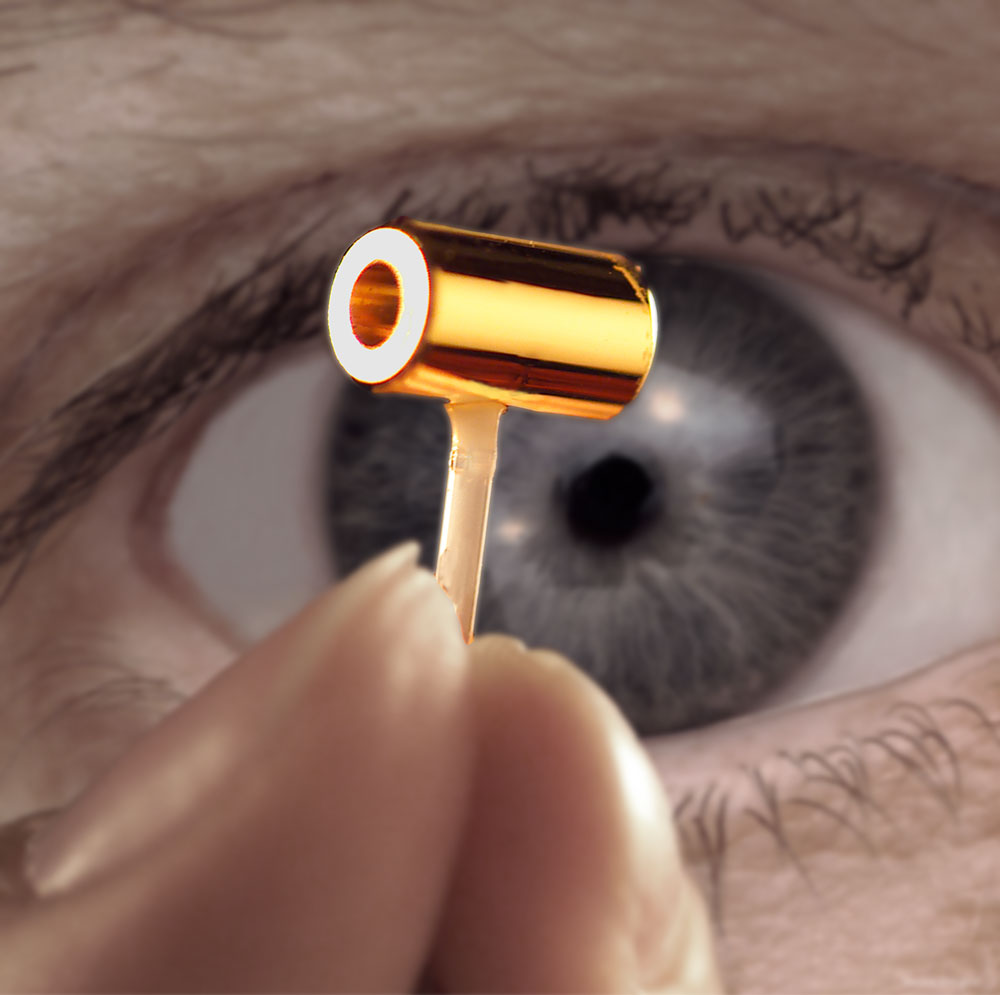 A typical hohlraum cylinder is just a few millimeters wide with laser entrance holes at either end. The deuterium–tritium fuel capsule (not shown) is seated inside the hohlraum for inertial confinement fusion (ICF) experiments at the National Ignition Facility (NIF).

During ICF experiments, fusion reactions within the hot spot produce alpha particles (helium nuclei) and neutrons. The number of neutrons generated characterizes the extent of the fusion process. For ignition, enough alpha particles must be present to initiate further fusion reactions in the hot spot and create a thermal runaway effect. Recent NIF experiments have reached the “alpha-heating regime,” in which the self-heating by fusion products dominates near the center of the fuel, with neutron yields exceeding 1 × 1016. However, yields must be higher for ignition, and the target capsule’s inefficient absorption of the x rays is a limiting factor.

Of NIF’s initial 2 megajoules of laser energy, about 1.6 megajoules are converted to x rays in the hohlraum. The capsule then absorbs only about 150 kilojoules, which is approximately 10 percent of the laser energy provided by NIF. “We lose a lot of energy in the coupling of the hohlraum x rays to the capsule,” notes Livermore physicist and hohlraum designer Peter Amendt. Increasing the energy efficiency of this coupling would benefit the central hot spot approach, in which an ignition spark initiates propagating thermonuclear burn. The energy boost would also support research on using a double-shell capsule to volumetrically ignite the whole fuel at once.

One way to improve coupling efficiency of the x rays to the capsule is to increase the capsule size. However, the capsule’s diameter, typically 2 millimeters, is constrained by the hohlraum’s usually cylindrical shape. Simply increasing the capsule’s diameter leads to an uneven distribution of x rays around it, resulting in an asymmetrical implosion that degrades the fusion process and inhibits ignition.

To increase the capsule’s size and ultimately the amount of laser energy absorbed, scientists, including Amendt, had to take an “out-of-the-box” look at the shape of the hohlraum. Four years ago, in a study funded by the Laboratory Directed Research and Development (LDRD) Program, Livermore’s Ogden Jones considered several novel hohlraum designs, including a nested spherical hohlraum or “ballraum” and a “midraum” cylinder bristling with periscope-like entry tubes for the shallow-angle laser beams. A more recent LDRD project headed by Amendt focused on two next-generation hohlraums that appeared to provide high-coupling efficiency—the rugby ball–shaped hohlraum, which is wider at the center and tapered toward both ends, and the frustraum, which looks like two identical truncated cones joined at their largest diameter.

The rugby hohlraums were implemented in studies to better understand how the outer shell of a future double-shell ignition target would behave. For these experiments, Livermore physicists Yuan Ping and Vladimir Smalyuk used a 7-millimeter-wide gold rugby hohlraum with a fuel capsule 3.5 millimeters in diameter—50 percent larger than a traditional capsule. This larger capsule held more fuel and had a greater surface area for capturing x-ray energy. The laser pulse shape used to drive the target was also slightly different. With cylindrical hohlraums, pulse shapes typically start with a few small power peaks followed by a main peak at about 10 nanoseconds to gently form and maintain a dense DT fuel layer. For the rugby hohlraum experiments, a short, high-power pulse was delivered to the capsule earlier in the implosion process, resulting in better coupling. 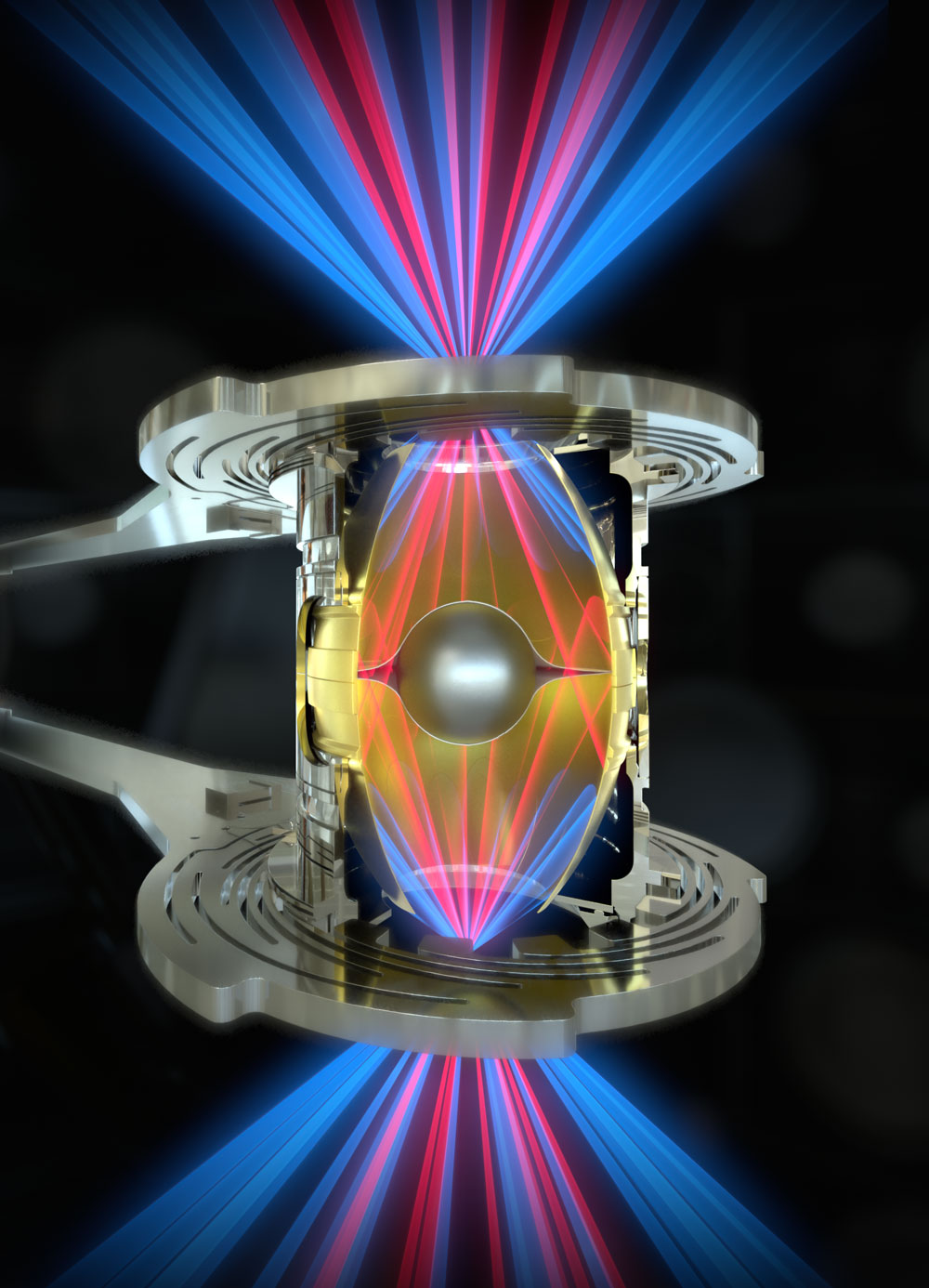 An artist’s rendering shows NIF’s 192 laser beams entering a gold-lined rugby hohlraum holding an aluminum fuel capsule. (Red and blue lines represent the inner and outer beams, respectively.) These hohlraums are wide at the center and tapered toward the ends. This shape is one of several under development for improving the energy efficiency and symmetry of ICF implosions. (Rendering by Jacob Long.)

The 1-megajoule laser shots resulted in 300 kilojoules being absorbed by the capsule—increasing the energy coupling to 30 percent. “We set a new energy coupling record for a hohlraum,” says Amendt. The team plans to step up the total amount of laser energy while determining the right combination of laser pulse shape, capsule size, and rugby hohlraum shape to achieve a symmetric implosion. Collaborating closely with Los Alamos National Laboratory scientists, the team is optimizing the energy delivery to the capsule to enable volumetrically igniting the fuel. In addition, with more energy available, defects can be better tolerated, providing more margin of error to achieve ignition.

Amendt also directs the design effort for the frustraum, a close cousin of the rugby hohlraum, with Livermore’s Steve Ross leading the experiments and Darwin Ho optimizing the capsule design. Amendt explains that the frustraum’s unusual shape has several benefits. The large central volume allows an oversize capsule to be easily fielded, promoting more x-ray absorption. The frustraum also uses smaller laser entrance holes, which reduces the ability for x rays to escape.

Another key feature is that the frustraum could generate more “specular glint” than cylindrical hohlraums. Specular glint is unabsorbed laser light that hits and reflects off the hohlraum’s inner walls at the same angle it entered the hohlraum. According to simulations, this reflected light might help with symmetry by conditioning the hohlraum plasma, allowing better propagation of laser light to the frustraum waist. Simulations calibrated to the earlier rugby-shaped hohlraum experiments suggest that the frustraum could offer effective symmetry control and sufficient drive to provide high-yield, moderate convergence implosions. For comparison, the standard convergence in a cylinder would be like squashing a basketball to the size of a pea. “With the frustraum, we may need only to shrink that basketball down to the size of a marble to achieve the same result,” explains Amendt.

Two 1.5-megajoule shots at NIF in early 2019 with 7-millimeter-diameter frustraums provided encouraging data for this design, yielding nearly 500 kilojoules of energy on target—far higher than any on-target results in the past. “We’re aiming for more efficient hohlraums,” said Amendt. “A more efficient hohlraum gives us a higher performance margin. Too little margin doesn’t give us enough leeway to handle all the aspects that can interfere with getting the maximum efficiency, such as pre-heating the fuel. With a bigger capsule, we can tolerate more pre-heat on the path to ignition.”

With the rugby hohlraum showing promise as an option for use with double-shell targets and the frustraum offering more efficiency for hot spot ignition, research on these new designs continues in earnest at NIF. Three subscale frustraum shots were completed in May 2019. During these experiments, the team met its three primary goals: achieving acceptable levels of backscattered laser light; demonstrating nearly 20 percent coupling efficiency; and developing a “peg” point for the simulation codes to predict, with improved confidence, symmetric drive conditions at full scale. 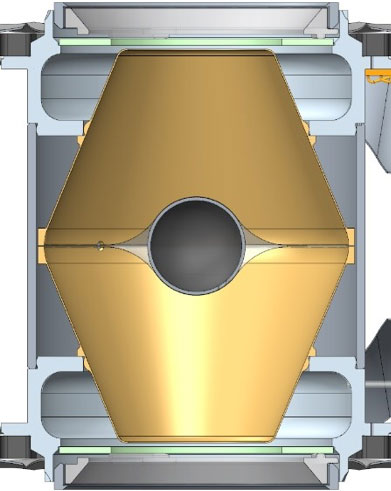 With these challenges met, a full-scale frustraum campaign is under way for the ICF Program. During this campaign, a 9.3-millimeter-diameter frustraum will be fielded with a 2.6-millimeter capsule to further refine modeling tools. Testing will address the accuracy of the models regarding key physics issues such as implosion symmetry, while planned experiments using the OMEGA laser at the University of Rochester’s Laboratory for Laser Energetics will focus on improving the basic physics understanding of specular glint in frustraums. Experiments using 3-millimeter-wide capsules in a rugby hohlraum are scheduled at NIF in 2020 to explore volume ignition in single-shell targets.

Amendt notes that these new ideas and approaches had their birth in LDRD projects. “LDRD gives us the opportunity to engage in ‘disruptive research,’ and to propose unusual ways to solve complex challenges,” he explains. “Now, we are looking at tripling the absorbed energy and tripling the performance margins. This increased performance margin will give us room to accommodate tiny target imperfections and our imperfect knowledge of the microphysics involved.” With a 300⁠-⁠percent leap in both energy absorption and performance margin, Amendt adds that the 2⁠-⁠megajoule NIF facility can provide capabilities that had previously required 6 megajoules, at no extra cost. He states, “The benefits are so great, we are determined to give this effort our best shot.”