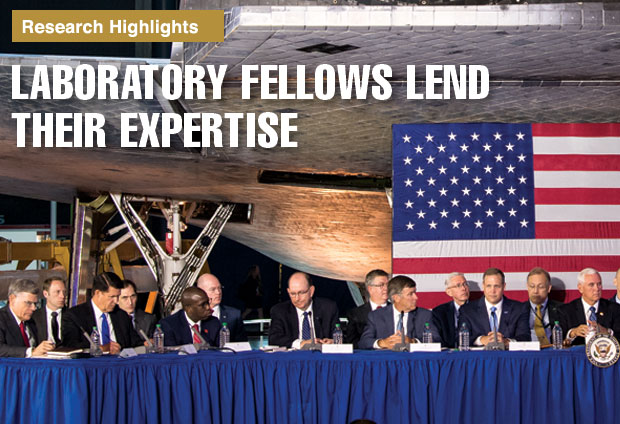 Livermore’s Aaron Miles (second from left), who serves in the White House’s Office of Science and Technology Policy, sits on the panel at a meeting of the National Space Council in August 2019. (Image courtesy of NASA/Aubrey Gemignani.)

Almost since the Laboratory’s beginning, Lawrence Livermore employees have provided technical expertise to government agencies and other institutions as part of temporary off‑site assignments. Now, Livermore’s Office of Defense Coordination (ODC) has formalized this effort into the Offsite Fellows Program (OFP) to help efficiently recruit and support Laboratory staff in these roles. “The program helps develop future leaders of the Laboratory,” says OFP manager Ric Schumacher. “They grow and learn by meeting the Laboratory’s customers face-to-face.”

Off-site fellows serve in such institutions as the Departments of Energy (DOE), State, and Defense (DOD), DOE’s National Nuclear Security Administration (NNSA), the White House, and in Congressional committees. “The purpose of the program is to help align the Laboratory’s strategic priorities to those of our funding agencies, to formulate relationships outside Lawrence Livermore, and to develop our staff,” says Deborah W. May, who serves as chair of the Offsite Assignment Board. 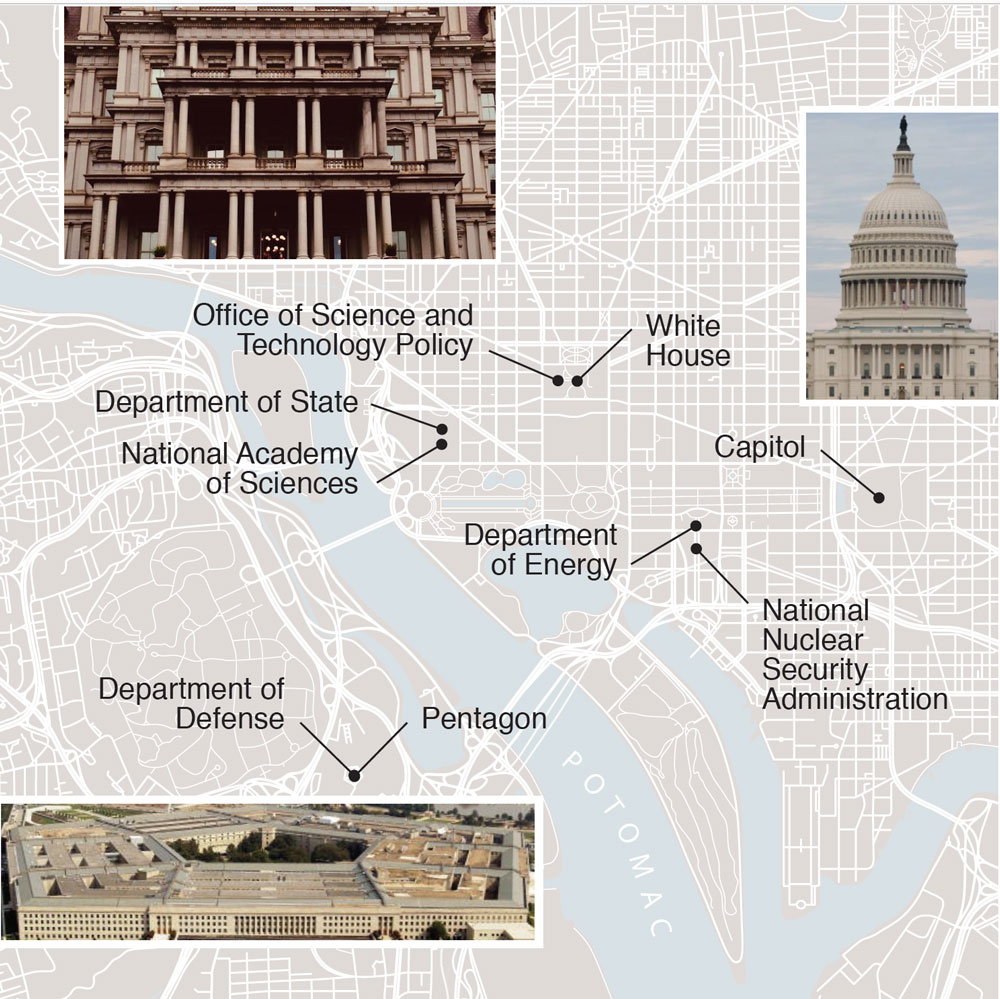 Off-site fellows serve in various institutions in Washington, DC, including the White House, Pentagon, and National Nuclear Security Administration (NNSA), among others.

Fellows are assigned to their positions either through Intergovernmental Personnel Act (IPA) agreements or as detailees. Employees who have IPA agreements remain Lawrence Livermore paid employees and are permitted to speak and act on behalf of the U.S. government. However, in these roles, personnel cannot act as advocates for the Laboratory. Detailees, on the other hand, are considered Lawrence Livermore representatives in the organizations they join. They cannot act as federal employees, but they provide technical advice as well as connections to Laboratory expertise. The program considers two to four years an ideal assignment length but does accommodate the growing need for briefer terms. For employees with young families, for example, short-term positions can also be developed.

Arriving at the White House’s Office of Science and Technology Policy (OSTP) in June 2012, Livermore’s Cindy Atkins-Duffin quickly became immersed in several matters of national concern. As an IPA employee at OSTP, Atkins-Duffin lent her expertise to decision makers as they developed policy responses to complex scientific and technical issues. For example, at the request of then-OSTP Director John Holdren, Atkins-Duffin convened an interagency task force that examined the overall response to the Fukushima Daiichi Nuclear Power Plant accident, which had taken place the previous year, and developed a protocol for addressing potential similar incidents in the future.

Over her two and a half years in OSTP’s National Security and International Affairs division, Atkins-Duffin also participated in a government–industry working group on medical isotope production and contributed to whole-of-government meetings evaluating the use of chemical weapons in Syria. Her technical advice influenced presidential directives on such issues as chemical facility safety and security. Since her return to Livermore in 2015, Atkins-Duffin has served as the principal deputy associate director for the Global Security Principal Directorate. Of her time in Washington, DC, she says, “I call it my science sabbatical. It was a fantastic experience. Personnel in these off-site assignments can see how government works, how science informs policy, and what the possibilities are, as well as the limitations.”

Today, Livermore provides technical expertise to OSTP via Aaron Miles, who through an IPA agreement serves as the principal assistant director for National Security and International Affairs, a one-year renewable position. “OSTP provides advice to the president and senior White House staff on policy matters with a significant technical element,” he says. “We participate in formulating national science and technology policy, and we coordinate across federal departments and agencies.”

In this role, Miles helps address challenges at the intersection of national security and science and technology—for example, the security implications of artificial intelligence, quantum information science, synthetic biology, and unmanned autonomous vehicles. Miles explains that staff members contribute to the process by applying their analytical skills and scientific rigor to policy considerations and processes. Miles notes that the work “gives me insight into how the federal government operates. I have learned how to express technical issues to decision makers.”

In 2018, Ashley Bahney spent six months as a detailee in DOD’s Office of Nuclear and Missile Defense Policy supporting the draft process for the 2018 Nuclear Posture Review (NPR)—a position previously filled by Miles. When Miles left to join OSTP, Bahney stepped in to continue the Laboratory’s support of completing the NPR process, which helps determine the role of the U.S. nuclear stockpile in the nation’s security strategy. NPRs are comprehensive reviews of U.S. nuclear weapons policy that have been conducted by each presidential administration since the time of President Bill Clinton. “The Nuclear Posture Review underpins much of what we do at Livermore, as well as my work,” says Bahney. “My experience at DOD was extremely valuable. It helped me understand the needs of our sponsors; the importance of Livermore’s contributions in Washington, DC; and how to better support the federal government’s national security strategy.” 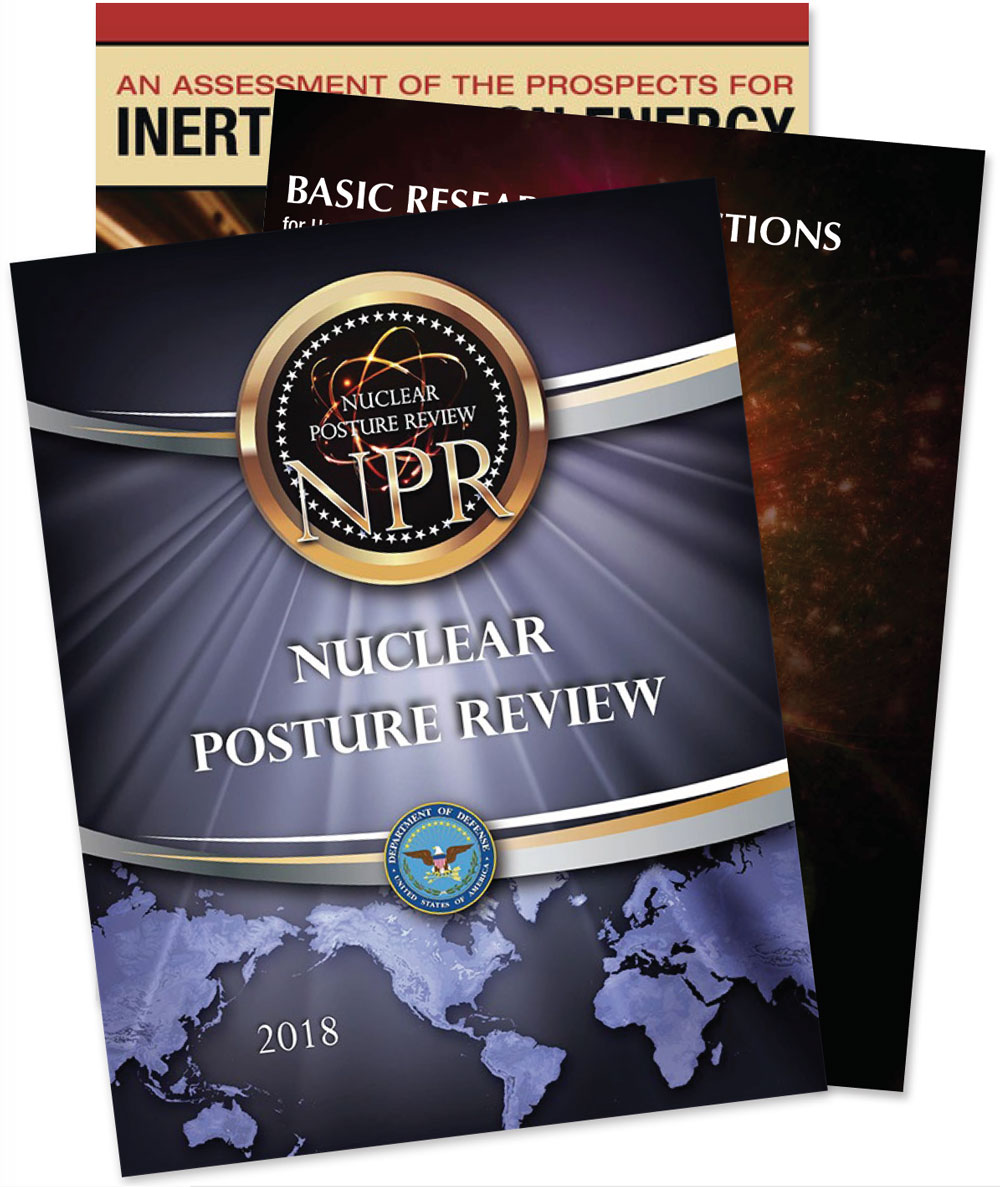 During their off-site assignments, Livermore personnel have contributed to various federal reports that help inform decision makers about technical issues related to policy.

At NNSA, Livermore’s Joseph Wasem took a three-month assignment during the start-up of the Stockpile Responsiveness Program, which was mandated by Congress to develop concepts for nuclear weapons systems anticipating future needs, and to help train a new generation of nuclear stockpile experts. Wasem found himself in demand to help others understand technological capabilities, review implementation plans, and convene workshops examining such issues as the survivability of the nuclear stockpile. Says Wasem, “The benefit to NNSA was having someone on hand who works with those technologies every day to explain technical issues.”

The Laboratory benefits from its returning off-site fellows because they bring knowledge about how to provide better value to its agency sponsors and stakeholders, as well as a wealth of connections. “I strongly believe that the off-site fellows are an increasingly important part of the Laboratory’s leadership cadre,” says Kim Budil, principal associate director for the Laboratory’s Weapons and Complex Integration (WCI) Principal Directorate. “We need people who understand how the government works, and our off-site fellows have great insight into this process.” 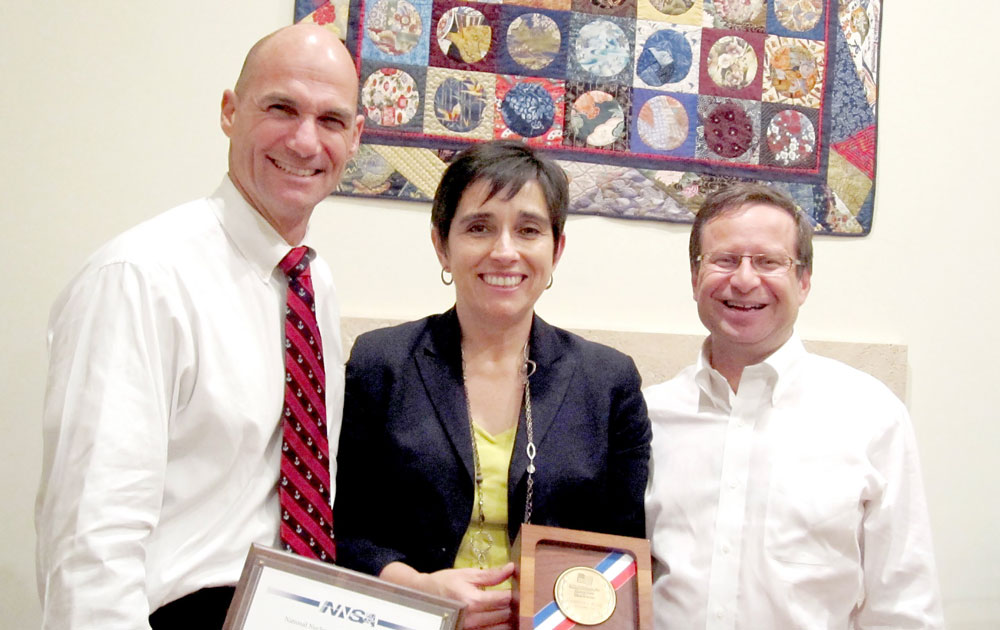 While on assignment with NNSA, Kim Budil (center) received the NNSA Administrator’s Award for Excellence medal from then NNSA Administrator Tom D’Agostino (left) and Department of Energy Under Secretary for Science Steve Koonin (right).

Budil worked in two off-site positions in Washington, DC. She was a detailee in NNSA’s Office of Defense Programs, where she led a government and multilaboratory task force to study how the aging of plutonium pits used in the nuclear stockpile was affecting its viability. As a detailee at DOE’s Office of the Under Secretary for Science, her technical advice informed plans for modernizing the nuclear stockpile, as well as a National Academy of Sciences study on the future of inertial confinement fusion.

When it comes to their terms in off-site assignments, many IPA personnel and detailees recall them as positive experiences that provide many benefits. For Brad Wallin, now the program director for Weapons Physics and Design in WCI, his two-year assignment at DOE headquarters allowed him to oversee a program on the dynamic behavior of materials relevant to the stockpile. “This experience provided insight into the scale and complexity of the nuclear enterprise,” says Wallin. “I met with many people at other government agencies and laboratories.” He adds, “Although my assignment was 10 years ago, I still work with people I met during that time. I am more effective in my current role because of that network.”

These assignments are also dynamic. Craig Wuest, who leads the ODC’s Systems Analysis Group, says, “People might be shocked to find out the extremely fast-paced nature of these off-site positions.” Wuest spent three years as special scientific advisor to DOD’s assistant secretary of defense for Nuclear, Chemical, and Biological Defense Programs.

“I strongly urge Livermore staff who are interested in off-site positions to seek out these opportunities,” says Budil. “They are fun, and they allow people to operate at a larger scale and scope than what is typically available at the Laboratory—it stretches employees’ skills and helps them understand the agencies the Laboratory supports.”