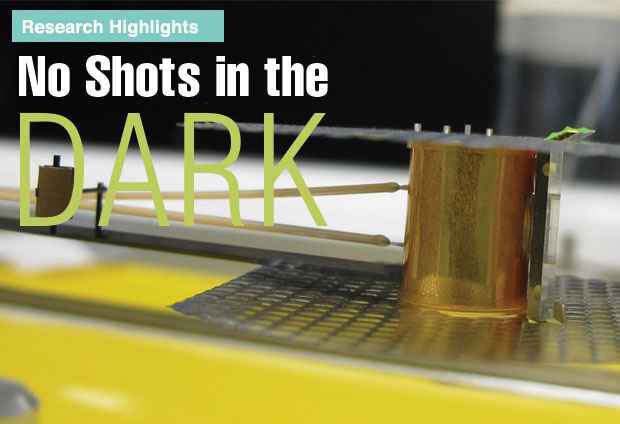 No Shots in the Dark

During experiments at the National Ignition Facility (NIF), 192 laser beams converge onto a tiny target at the center of the 10-meter-diameter, spherical target chamber in support of stockpile stewardship and fusion-ignition physics. Livermore scientists use the data from these experiments to certify the safety and security of the nation’s nuclear stockpile and make progress toward achieving fusion ignition and energy gain. With NIF, researchers can also explore the physics of material conditions at the centers of gas giant planets and stars, as well as other extreme environments.

Researchers conduct approximately 400 shots a year at NIF. The facility relies on a small army of personnel to keep it operational 24 hours a day nearly year round. One of the many critical teams is the Debris and Shrapnel Working Group (DSWG). Its mission is to evaluate risks to NIF equipment from target debris and shrapnel produced during experiments. Through computer modeling, risk assessment analysis, and experience, the team helps ensure that debris and shrapnel generated by laser shots does not damage optics, diagnostics, or other components that are expensive and difficult to replace.

DSWG is one of three groups within TaLIS (Target–Laser Interaction Sphere), an umbrella group led by Dean LaTray whose purpose is assessing the potential damage to NIF from the interaction of the laser with the target. A second group within TaLIS examines the danger posed by laser–plasma interactions, which can cause laser light to pass back through the beamlines, damaging mirrors and laser glass. A third group performs configuration reviews, examining the interface between laser light, targets, diagnostics, and the rest of the target chamber. “The service TaLIS provides is unique because NIF is unique,” says LaTray. “We offer capabilities that no other facility can provide.”

Debris and shrapnel risks stem from three sources: x-ray loads emitted from the target when hit by the laser, debris wind (vaporized material, low-density particles, or molten spray traveling at high velocity), and unvaporized target components. In the first case, laser energy heats up the target and the emitted x rays deposit energy onto diagnostics that cause materials on exposed surfaces to ablate—generating a damage-inducing pressure pulse. Debris wind poses a risk as a distributed, blast-like pressure wave. These two sources primarily threaten diagnostics in close proximity to the targets. Finally, when deposited laser energy is not sufficient to fully vaporize the target, chunks of molten or solid material driven at up to 10 kilometers per second can impact target chamber components, including optics and diagnostics.

To mitigate these risks, DSWG runs computer simulations of shots to model the deposition of the laser energy and the subsequent response of targets and diagnostics using several Livermore-developed programs, including ARES (for laser–matter interaction and radiation hydrodynamics) and ALE3D, Dyna3D, or LS-DYNA (for shrapnel impact and structural deformation). The models follow the evolution in time as far forward as possible to identify and characterize the risks. “We protect the facility and facilitate the science,” says DSWG leader Nathan Masters. “We ensure minimal risk to the facility. Our work is successful when nobody at NIF hears about us.”

Although experimental teams may only need data from the first 20 to 50 nanoseconds (ns) of a shot, Masters’s group tries to model the effects up to several microseconds and then extrapolate where the energy and debris are directed. Based on the simulation results and previous experience with similar experiments, Masters and the other members of his group, Rosita Cheung, Michelle Oliveira, Andrew Thurber, and Jae Chung, determine whether the damage risk is significant. If so, the group recommends changes to the experimental design that will reduce risk to acceptable levels. In the more than 10 years since the effort began, the team has analyzed hundreds of NIF experiments. “Through a combination of empirical and quantitative assessment,” says Dan Kalantar, target area senior scientist and advisor to the group, “we can say whether a configuration is safe based on our experience and our evaluation of risks.”

An early experiment to develop a platform for testing the effects of x rays on materials provides an example of DSWG’s utility. The x-ray source application (XRSA) test cassette was designed as a platform for mounting test samples needed in experiments that expose materials to x rays. Such experiments would allow researchers to study, for example, the effects of radiation damage on materials, or radiation-induced ablation. The original design of the cassette featured several sample holders (paddles) mounted in a circular pattern. The cassette was positioned by one of NIF’s diagnostic instrument manipulators, or DIMs, with the samples facing the x-ray source—a laser‑driven target. Filters in front of the samples ensured that the appropriate x-ray spectrum was delivered to the samples for each experiment. However, with this initial XRSA design, the intense x-ray loads generated during the tests caused the filters to fail, resulting in sample damage. DSWG simulations of the experimental setup led to a redesign of the sample cassette. The re-engineered platform included a thin, tilted prefilter that could absorb soft x-ray energy and be vaporized. Debris from these sacrificial filters would then blow off away from the samples—effectively decoupling the potentially damaging portion of the x-ray load and ensuring survival of the remaining filters and samples. The change resulted in the platform performing without fail in 4 shots involving 60 samples. This design has been leveraged in other diagnostics to allow for thinner filters than otherwise possible.

However, frequently DSWG only has time to model the initial experimental setup and the modified experiment once, generating a comparison by which to evaluate the risk. The change in conditions between the two simulations provides valuable information about how to reduce risk during the actual shot. Determining how closely the simulation will match reality requires DSWG’s experience in interpreting the results. 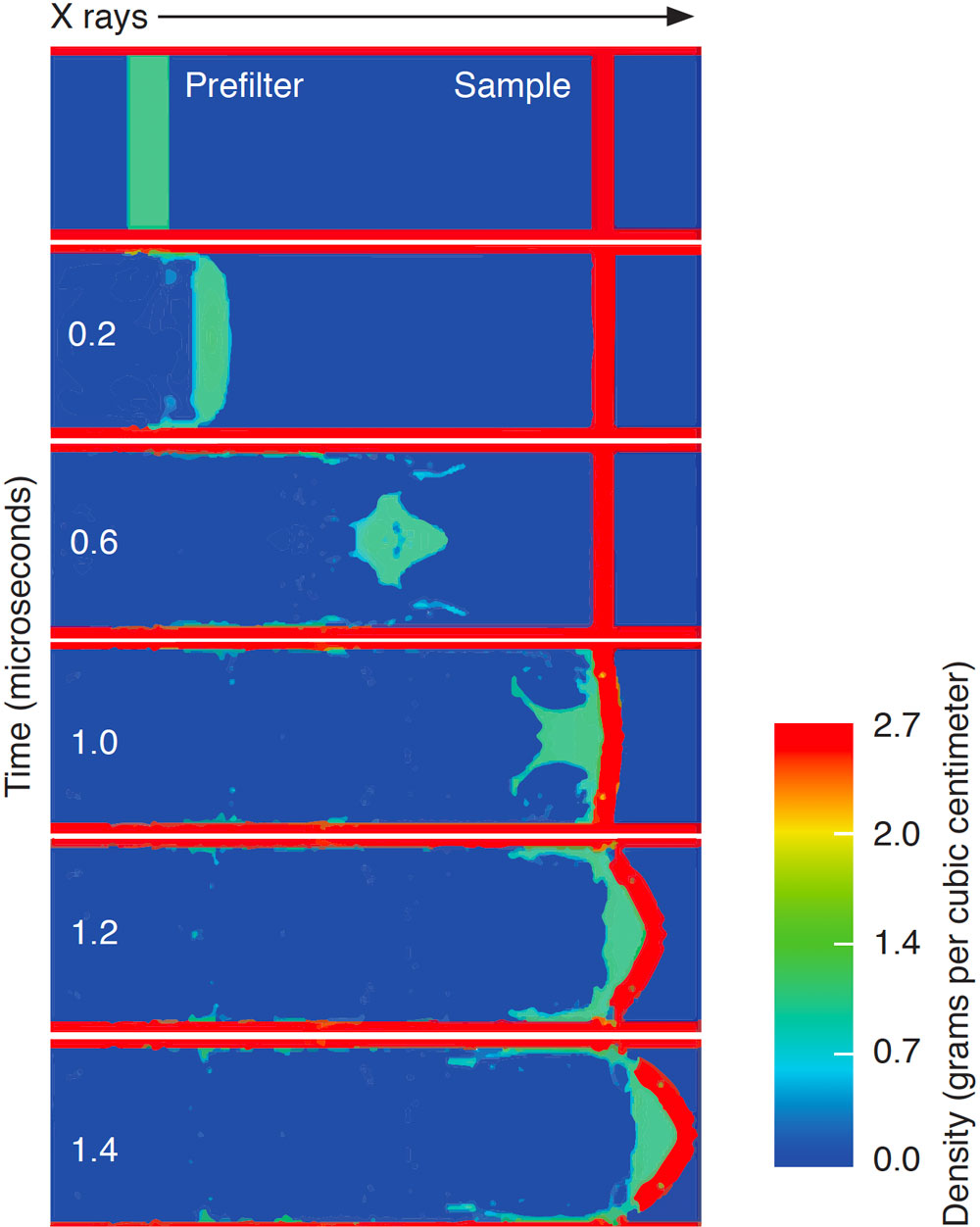 Simulations run by DSWG show how the filters in the initial XRSA design failed, resulting in soft x-ray–induced ablation of the samples.

When a new shot’s configurations and target design are similar to a previous experiment, additional simulations may not be necessary, and the experiment can be certified as meeting minimum risk expectancy. However, modifications to experimental setups, including targets, diagnostic participation or positioning, or different laser energies, require that DSWG take a closer look. “We’ll recommend changes to shielding—we can propose thicker filtration, for instance, or modifications to the diagnostic itself,” says Thurber. “If optics are at risk, we might ask the experimental team to change something in the experiment. Depending on the nature of the target, for example, we may ask them to turn off specific beams and close off the final optics assemblies from the chamber. Directional risks to the optics require a special solution.”

The campaign, or series of experiments, called Material Strength Tantalum Rayleigh–Taylor (MatStrTaRT) offers a case in point. The purpose of the campaign was to observe the growth of Rayleigh–Taylor (RT) instabilities in highly compressed materials, providing data for evaluating material strengths under these conditions. During an MatStrTaRT experiment, a laser-driven holhraum (a cylindrical container holding the target) produces x rays that partially ablate the sample assembly, compressing the sample and generating RT instabilities. The x-ray foil backlighter illuminates the growing instabilities, which are recorded on x-ray-sensitive image plates in the High Energy Imaging Diagnostic (HEIDI). A 1-millimeter-thick gold shield placed on the side of the target was designed to block x-ray emissions from the holhraum that could overwhelm the image.

The High Energy Imaging Diagnostic (HEIDI), which collects x rays generated by a backlighter foil on an x-ray-sensitive image plate, is used to obtain shot data. (inset) Craters and debris, including fragments of the gold shield, can be seen embedded on the HEIDI nosecap aperture after an MatStrTaRT experiment. (Original HEIDI rendering courtesy of Maryum Ahmed.)

For the campaign, DSWG simulated the response of the thin-walled 13-millimeter-long target made of gold and epoxy—including the 1-millimeter-thick shield—to an 800-kilojoule laser pulse. The group’s model, run with Livermore’s ARES code, predicted that solid and molten debris from the gold shields would be driven by the target toward NIF’s optics at velocities—about 2 kilometers per second—fast enough to cause significant damage. Working with the experimental team, DSWG devised a solution using smaller shields on the target in combination with a smaller rectangular aperture at the front of HEIDI. Simulations indicated that these new shields would melt more completely, allowing little or no debris to be driven toward the optics. The group’s efforts have been successful. Although MatStrTaRT targets still produce significant shrapnel, after the target modifications, little is directed toward the optics. Only a single disposable debris shield has been damaged in nearly 40 shots related to MatStrTaRT. 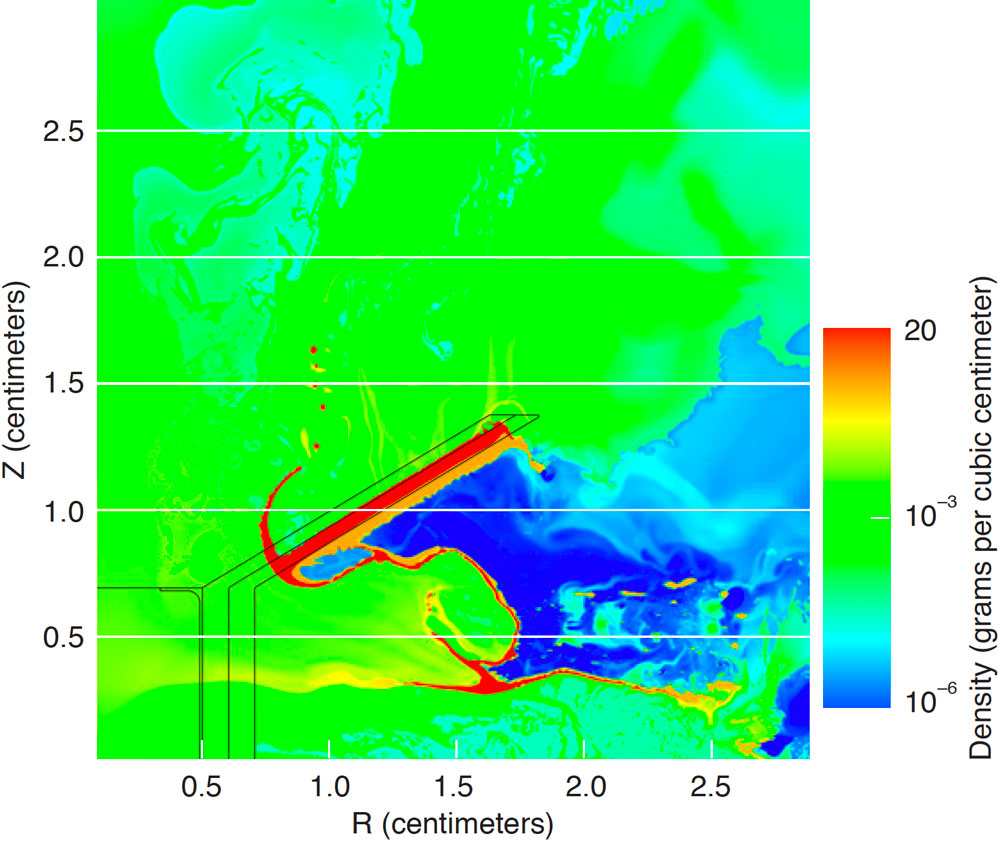 A density plot from the ARES simulation at 5.6 microseconds shows low-density blow-off and displacement of the MatStrTaRT target and large gold shield (red), driven by x-ray ablation, from their initial position (black lines). The large shield's velocity and mass could have resulted in significant damage to NIF optics.

With the high yearly shot rate at NIF and the increased complexity of experiments, DSWG and their TaLIS colleagues have more work than ever. “Shots used to be fairly routine,” says Oliveira, who coordinates DSWG’s activities. “Within the last two years, more changes have been made to shots, targets, and diagnostics than before, all of which affect the risk assessment. Shot complexity has definitely increased.”

The changes have motivated the DSWG to recommend design alterations earlier in the process. Oliveira explains, “Now, we may work with engineering teams months in advance as they design new diagnostics to better protect the instruments from damage.” Keeping damage from delaying NIF’s work has made DSWG essential to its success—even if the group’s own success means their NIF colleagues rarely hear about them.