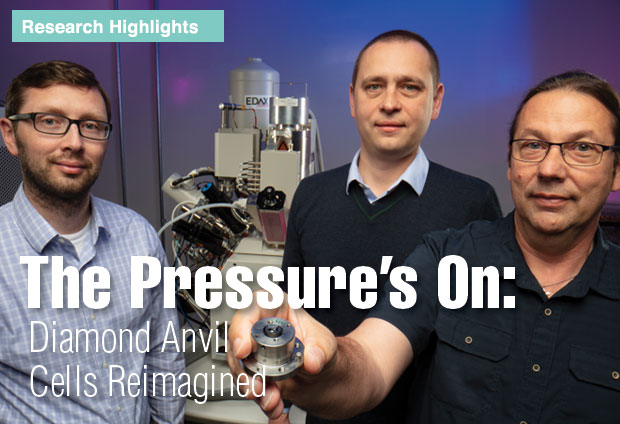 When it comes to subjecting materials to extreme pressures, scientists have several tools at their disposal, including gas guns, pulsed-power machines, and lasers. At Livermore’s National Ignition Facility (NIF), for instance, intense, precisely timed and shaped laser pulses are used to shock samples hard and fast, driving materials to high temperatures and pressures. (See S&TR, December 2016, Laser Experiments Illuminate the Cosmos.) When scientists want to more slowly “squeeze” materials, they turn to diamonds to apply the pressure.

Unlike shock techniques, diamond anvil cells (DACs) act as small, mechanical presses that gradually produce ultrahigh pressure environments. Developed about 60 years ago, conventional DACs routinely subject materials to pressures of approximately 300 gigapascals (GPa)—60 GPa less than the pressure found at the center of the Earth. (For comparison, the atmospheric pressure at sea level is about 1/10,000th of 1 GPa.)

Recently, a team of Lawrence Livermore experts led by physicist Zsolt Jenei developed a new diamond anvil design that can reliably squeeze materials to pressures greater than 500 GPa. Such pressures are within a stone’s throw of those in the cores of giant icy planets, such as Neptune. Experiments using this toroidal (donut-shaped) design are yielding data of interest to astrophysicists. The data also serve to refine the supercomputer codes that drive increasingly accurate simulations of stockpile weapons’ performance. 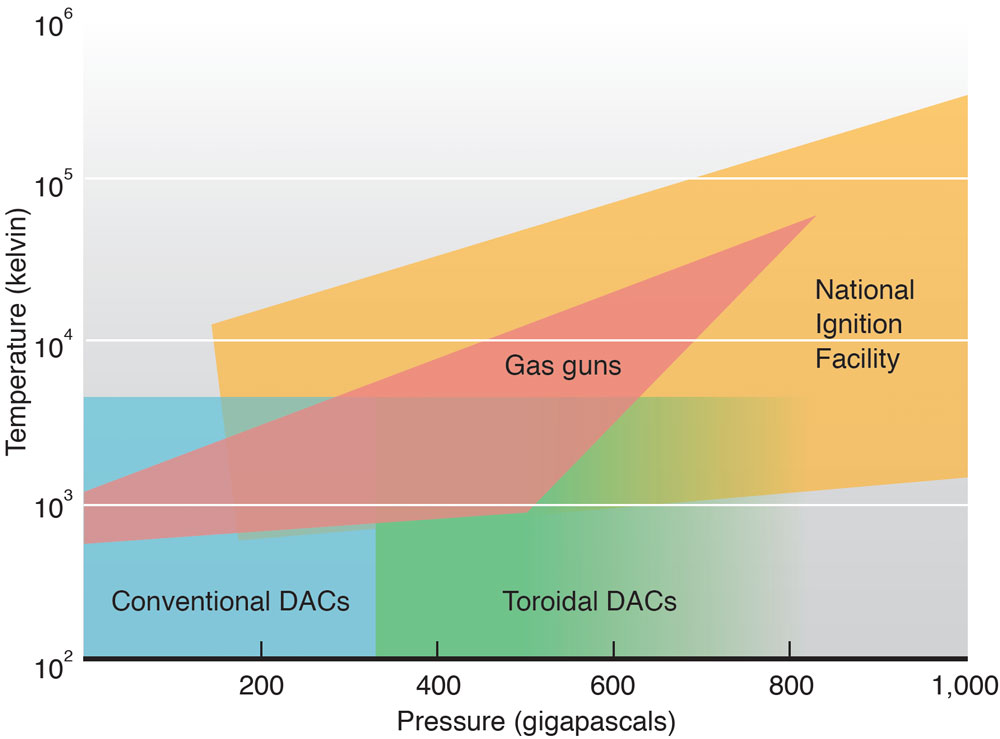 Scientists use different experimental techniques to investigate how materials react to changes in pressure and temperature. The increased pressure range generated by DACs provides valuable data for planetary and stockpile scientists.

DAC anvils are created from opposing pairs of flawless, polished, single-crystal diamonds. The hardest known solid, a diamond can withstand ultrahigh pressures and is also transparent to diagnostic radiation, such as x rays and visible light. In experiments, a pair of flat diamond anvil tips (typically 30 micrometers wide), called culets, contains a microgram sample of a material held within a metal gasket. The cell increases the force on the back of the diamond anvils in small, controlled increments, pushing the culets together until they seal, and squeezing the sample into a smaller and smaller volume. Under such extreme pressures, the structure of a material as well as its electrical and magnetic properties can change, sometimes drastically. (See S&TR, December 2004, Putting the Squeeze on Materials.)

Livermore postdoctoral physicist Earl O’Bannon notes that the technique is powerful because it allows researchers to slowly increase the pressure on a material and take numerous measurements along the way. The resultant pressure–volume curves are used to define the equation of state (EOS) for the sample material. EOS data describe the relationship between the thermodynamic conditions of pressure, density, and temperature, and under what set of these conditions the material changes from one phase (solid, liquid, or gas) to another. This information is used to help refine computational models and validate calculations. 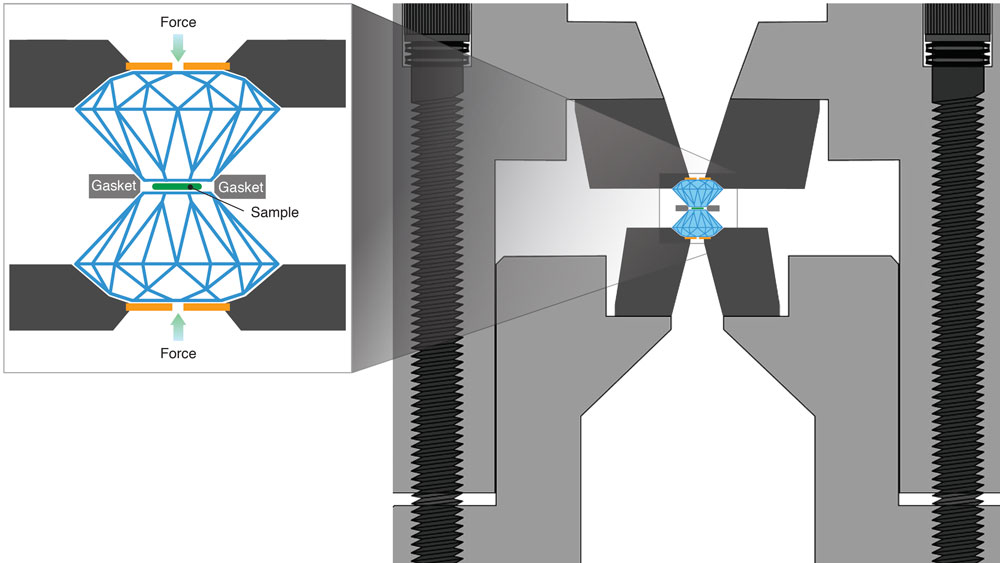 DACs are created from opposing pairs of flawless, polished, single-crystal diamonds. Each pair of flat diamond anvil tips, called culets, contains a microgram sample held within a metal gasket. The cell increases the force on the back of the diamond anvils in small, controlled increments, pushing the culets together until they seal, and squeezing the sample into a smaller and smaller volume.

In 2016, Jenei was funded through the Laboratory Directed Research and Development (LDRD) Program to conduct a feasibility study to explore a new toroidal DAC design that could achieve higher pressures. The team succeeded in expanding the pressure range by modifying the shape of the diamond face to form a culet approximately 9 micrometers wide atop an elevated column. The column is surrounded by a circular torus (or depression), with a flat shoulder ringing the torus. The result resembles a tiny flat-topped tower surrounded by a circular moat. Jenei explains, “We arrived at this configuration after two years of work, reviewing and varying many design parameters, such as the diameter of the culet, the radius and depth of the torus, and the height of the flat shoulder outside the torus.”

One of the advantages of this design is that it overcomes the sample-containment problem that is encountered with small-culet conventional DACs. Jenei explains, “One of the goals of DAC design has been to make an ever-smaller culet. The smaller the culet, the higher the pressure one can obtain by applying the same amount of force. However, for traditional DAC designs, at pressures above 400 GPa with culets less than 20 micrometers in diameter, the gasket flows away, leading to sample-containment issues. Our design solves this problem. In a toroidal DAC, when the metal gasket starts to flow, the extruded material is trapped in the torus, keeping the central part of the gasket—and the sample—in place.”

To create a pair of toroidal diamond anvils, Jenei begins with two single-crystal diamonds. Using software he developed specifically for this task, Jenei generates a three-dimensional model of the final shape and dimensions for each gem. These models, which show the amount and shape of the material to be removed for each diamond, are translated into bitmaps. At Livermore’s focused ion-beam (FIB) facility, microbeam specialist Nick Teslich imports these bitmaps to use as patterns for FIB milling the toroidal surface for each diamond anvil. Once milled to specification, the diamond anvils are pressed into a thin metal foil to make a form for the gasket. Teslich’s challenge is to then mill a hole or pore for holding the sample in the exact center of the gasket. Such pores generally measure about 4 micrometers in diameter and 4 to 10 micrometers in depth.

An added bonus for the development team is that toroidal DACs can be prepared and loaded using the same process as conventional DACs. O’Bannon says, “This versatility allows us to use the current infrastructure of a typical DAC laboratory for our design, which is a big plus.” 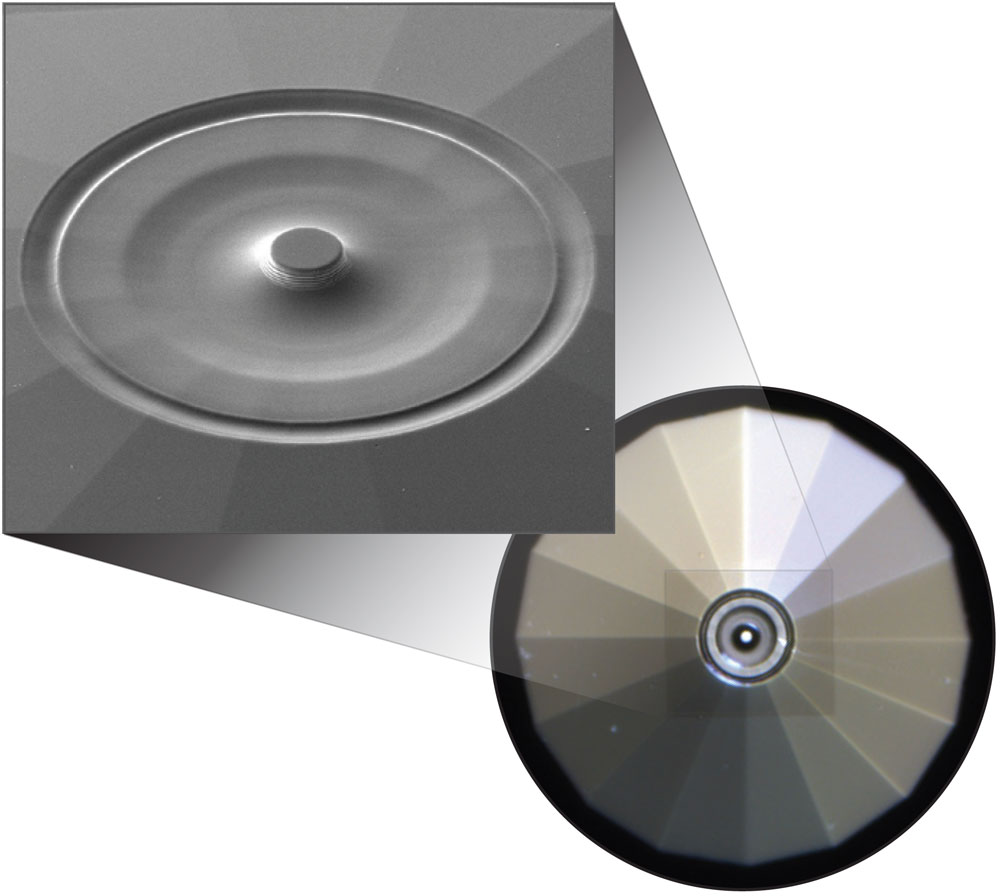 Unlike conventional DACs that have a flat diamond anvil tip, toroidal diamond anvils have a 9-micrometer wide culet atop an elevated column. (inset) A scanning electron microscopy image shows a closeup of the culet, torus (or depression), and outer shoulder.

Taking DACs to the Experimental Table

With a working design in hand, the team moved on to the experimental stage, taking measurements of various metals under extreme pressure conditions at room temperature. Experiments are carried out using the High-Pressure Collaboration Access Team beamline at Argonne National Laboratory’s Advanced Photon Source. X-ray diffraction patterns are collected at room temperature over the course of several experimental runs using x-ray beams of 30 kiloelectronvolts with exposures between 4 and 8 seconds. These diffraction patterns reveal the internal structures of crystalline samples, as well as phase-transition pressures, and ultimately, their EOS at constant temperatures.

One of the most important outcomes from this work has been the ability to generate the room-temperature compression curve for materials of interest. O’Bannon explains, “The curve is used as a base point for computer models. The data we gain from this technique can be used to validate and calibrate models to predict materials’ properties at other temperatures and pressures.” A future step for toroidal DAC experiments, notes Jenei, is to generate compression curves for materials using higher temperatures.

Early experiments on the metal rhenium, which served as both the gasket material and sample, resulted in a series of record-breaking results for single-crystal diamond anvils. Subsequently, the team has begun exploring the material behaviors of transition metals and other metals that are commonly used as pressure markers—gold, copper, and platinum, for example. In recent DAC experiments, they successfully compressed seven different metals beyond 400 GPa and routinely achieved pressures between 425 to 500 GPa. Their results show good agreement with previous data obtained from conventional DACs at lower pressures.

Looking to the future, William Evans, division leader for Physics in Livermore’s Physical and Life Sciences Directorate, says, “As Dr. Jenei and his team continue to advance sample-loading techniques for this toroidal anvil approach, the study of material properties in the hundreds of gigapascals pressure regime is sure to identify new high-pressure phases and equations of state for materials. Such findings will have the potential to increase our understanding of planetary interiors and high-pressure science.” O’Bannon adds, “This new take on an established technique has opened the door to exploring molecular solids, such as water, and other planetary ices at pressures more than 500 GPa with x-ray and optical techniques. Reimagining DACs is a step in the right direction.”