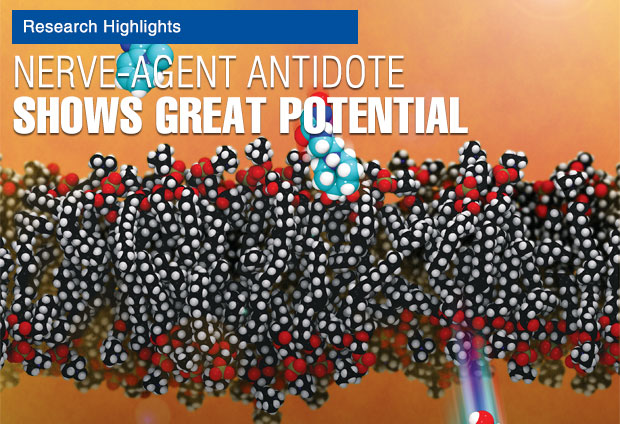 A model of the blood–brain barrier shows the permeability of three different compounds: 2-PAM (top left), RS194B (center), and LLNL-02 (lower right). Of the three compounds, only LLNL-02 successfully permeates the membrane.

In the late 1930s, German scientists developing pesticides accidentally discovered a substance that not only effectively killed insects, but inadvertently also affected humans. Named “tabun,” this substance, an organophosphate, would eventually be considered the first synthesized nerve agent. In subsequent studies, it proved lethal to animal test subjects—causing death within 20 minutes or less.

Nerve agents were formally banned by the Chemical Weapons Convention in 1997, but their illicit use has been detected as recently as 2018. To counteract the effects of nerve agents, military forces administer an antidote-injection device known as DuoDote. Similar to the way an epinephrine pen introduces adrenaline to the body, DuoDote simultaneously injects 2-PAM, a drug designed to restore the body’s nerve function, and atropine, a medication that minimizes the symptoms of nerve-agent poisoning. The 2-PAM drug successfully reverses the effect of the nerve agent on the body’s peripheral nervous system (PNS), but its chemical composition inhibits it from protecting the central nervous system (CNS), specifically the brain. Alarmingly, nerve agents reach the brain rapidly and have long-lasting effects.

A significant challenge for researchers developing nerve-agent antidotes is creating a drug that simultaneously protects both biological systems. Such a drug must be able to cross the semipermeable, protective blood–brain barrier (BBB), which separates the brain’s blood supply from the CNS extracellular fluid. In a government-funded effort, scientists at Lawrence Livermore’s Forensic Science Center (FSC) and Biosecurity Center (BSC) have formulated molecule LLNL-02, the first molecule capable of this dual protection.

Nerve agents work by interrupting the activities of neurotransmitters in the body. For example, when a human attempts to lift an arm, the neurotransmitter acetylcholine (ACh) present within PNS transmits a signal to the corresponding muscle receptor to trigger that movement. Afterwards, an enzyme known as acetylcholinesterase (AChE) arrives to remove the ACh molecule. Without AChE, ACh molecules build up and cause uncontrolled muscle contractions, spasms, and eventually death. Within CNS, excess ACh degrades neural functions, resulting in conditions such as memory loss.

Nerve agents wreak havoc on the body by deactivating the AChE “cleanup” enzyme. The body is affected almost immediately, and an antidote must be administered within two minutes to halt the agent’s physical effects on PNS. However, since 2-PAM cannot penetrate BBB, victims often suffer long-term neurological damage. The BBB membrane comprises a complex lipid bilayer, made up of fatty acid molecules and export proteins, which prevent lipophilic molecules from diffusing across BBB. These export proteins act like gatekeepers for the brain, catching any foreign substances and ejecting them back into the body’s systemic circulation. In addition, BBB contains tight cell junctions that hinder even small molecules, foreign or not, from permeating the membrane. Thus, an effective nerve-agent antidote must be able to confer PNS protection while simultaneously penetrating CNS to reactivate AChE.

The Path to Antidote Development

Scientists at Lawrence Livermore turned to supercomputers to help tackle the antidote challenge. Timothy Carpenter, a scientist in the Laboratory’s Biochemical and Biophysical Systems Group, developed a BBB computer model to simulate the effectiveness of potential antidotes prior to their creation. He explains, “Our organic chemist couldn’t afford to waste time making compounds that were not going to work, so we vetted compounds computationally first.”

Carpenter and the team used a barrier-crossing compound identified in a study from the University of California at San Diego to inform multiple simulations of potential antidotes. “Essentially, I input the drug molecules into the model and observe their interaction. I do not direct them at all—their movement is informed by physics.” The team’s focus is two-fold: screening millions of drug activities (a task performed by Livermore scientist Brian Bennion) to see if the antidote counters the nerve agent and assessing the drug’s effectiveness at crossing BBB.

Each potential drug requires hundreds of simulations, and each simulation involves 5 quadrillion equations. Remarkably, the Laboratory’s supercomputers can model a potential compound’s effectiveness in a couple of days, whereas a laptop would take a couple of years to complete the same task. In tandem with computational efforts, lead chemist and project principal investigator Carlos Valdez synthesizes preliminary compounds to build the simulation library. Valdez tests these compounds for BBB permeability and feeds them (successful or not) into the library as a way of both validating simulation results and establishing a baseline of compound effectiveness. 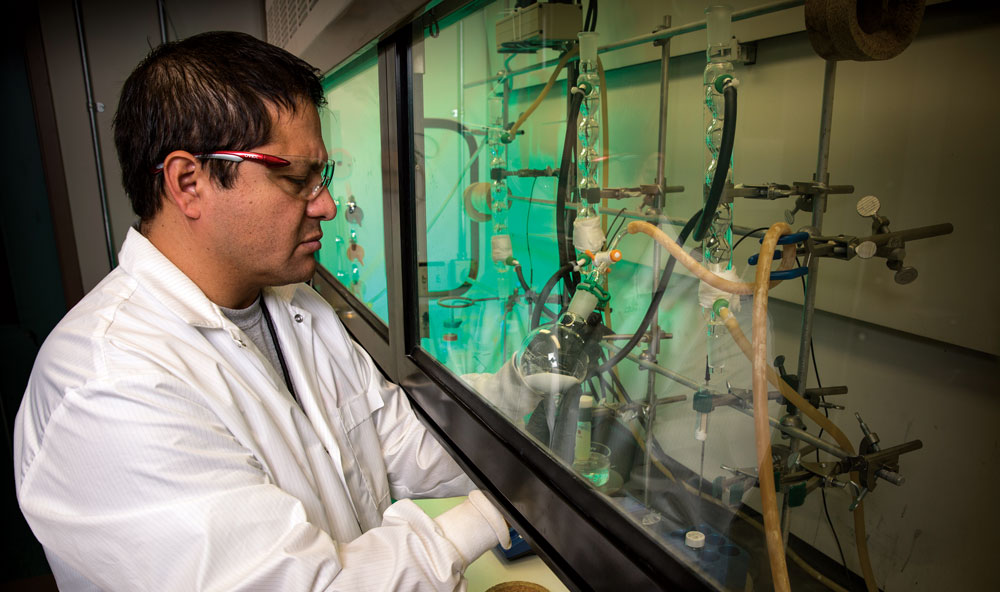 The most successful compounds are iterated and eventually synthesized for thorough in vitro testing. Valdez explains, “Our biochemist Nicholas Be screens synthesized compounds in a lipid-bilayer assay that strongly mimics the blood–brain barrier. Scientists have the extremely difficult task of balancing the molecule’s overall lipid content with its activity, as well as making sure the molecule is not intercepted by one of the blood–brain barrier’s export proteins. The assays are set up to test these qualities.” Adds Valdez, “Size is important here. Small molecules have a much better chance of crossing cell boundaries and reaching their targets than do large molecules.” Critical factors such as the administration method and the commercial availability of materials used in the compound are also considered.

In addition to validating permeability and reactivity characteristics, Valdez helps determine if a molecule would be toxic to humans. In partnership with Livermore colleagues, scientists at the United States Army Medical Research Institute of Chemical Defense run in vitro assays on liver cells to assess potential toxicity, and whether a compound blocks critical ion channels—those involved in heart function, for example. Says Carpenter, “The team’s extensive modeling, synthesis, and testing efforts confirmed the potential of LLNL-02, a small molecule. Although LLNL-02 is slightly less active than 2-PAM, it has a much higher effectiveness because 20 times more of it penetrates the blood–brain barrier.” All LLNL-02 toxicology results came back clear, allowing the team to move into the final stage of antidote development—in vivo animal testing.

Livermore biomedical staff scientists Heather Enright and Mike Malfatti led the in vivo animal studies and tested the molecule’s pharmacokinetics. Says Malfatti, “During in vivo testing, we look at how the compound is metabolized and excreted. We also look at whether it gets through the blood–brain barrier, if it’s toxic, and if it eliminates at a good rate.”

During tests, animal subjects are given a dose of the antidote, which is tagged with carbon-14. At predetermined time intervals, tissues from various parts of the subject are collected and quantified using accelerator mass spectrometry (AMS)—a technique that separates carbon-14 from other carbon isotopes in the body. (See S&TR, December 2012, Faster Analysis from Biological Accelerator Mass Spectrometry.) “The extreme sensitivity of AMS to detect carbon-14 allows us to identify the antidote in tissues at very low levels with high accuracy. With this technique, we can determine where the chemical goes and how it’s metabolized,” says Malfatti. 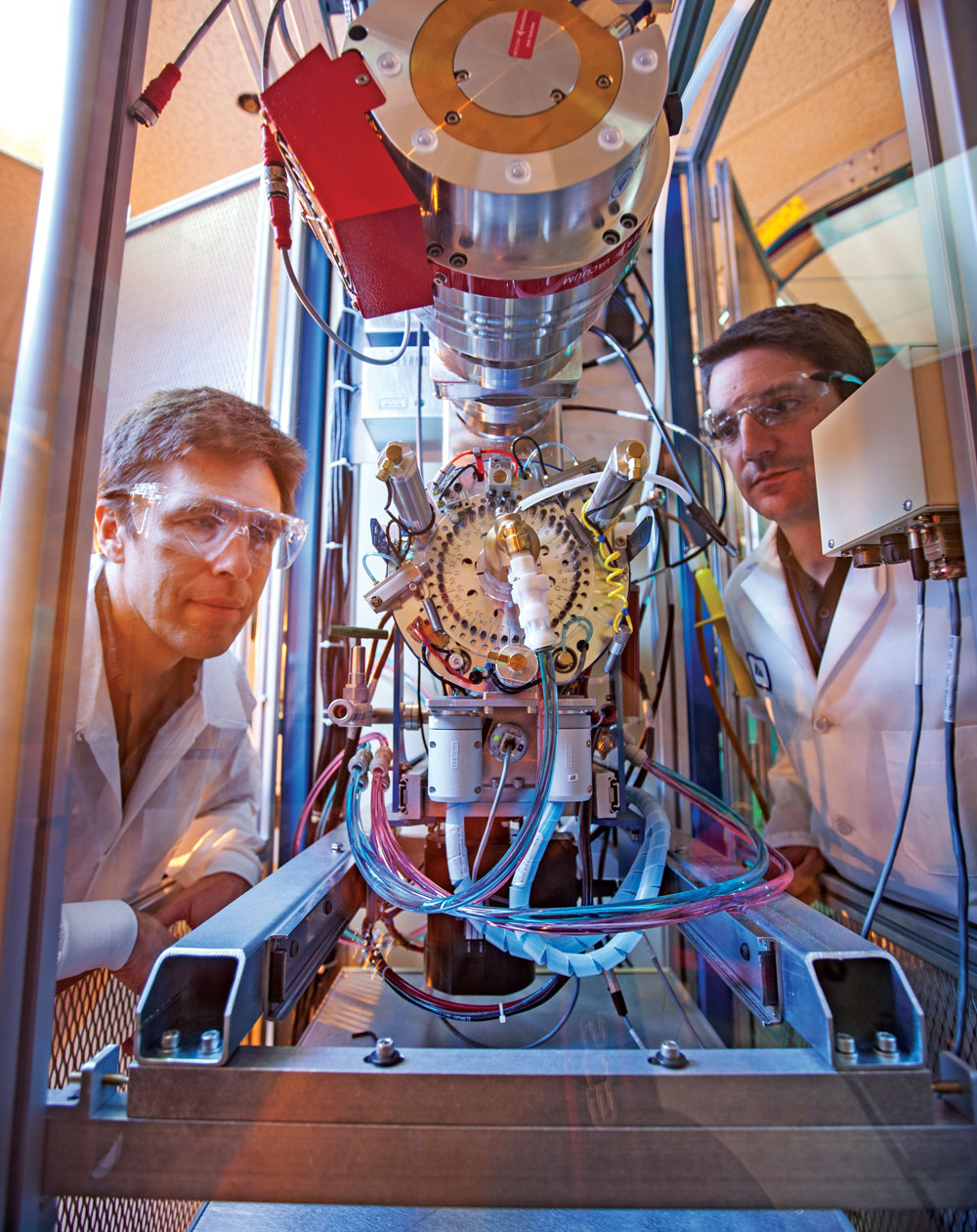 In the next stage of in vivo tests, the scientists administer a nerve agent (in this case, sarin) to the subject, followed by the antidote approximately a minute later—a process that replicates how an antidote would typically be administered in the field. The scientists look for overall survivability and then, within an eight-hour window, they look at the enzymes present in the blood and the brain. “Our primary goal is survivability,” explains Enright. “Then, we evaluate whether the antidote is reaching the brain quickly enough to mitigate the negative effects of a nerve agent and whether it reactivates the enzyme. If these initial tests are promising, we’ll move onto additional testing to evaluate toxicity and dose refinement,” says Enright. Initial in vivo test results for LLNL-02 have been positive, demonstrating that the molecule reaches the brain within five minutes of administration and provides test subjects with a 100 percent survivability rate.

Journey to Field Use

The combined scientific capabilities provided by Lawrence Livermore’s supercomputers, AMS instrument, and in vivo testing resources uniquely equip researchers to conduct work relevant to antidote development. Notably, Livermore is the only institution other than the Army cleared to use actual nerve agents during testing. “The ability to use real nerve agents in conjunction with computational simulations and AMS analysis has been incredibly valuable for this effort,” says Valdez. In fact, similar techniques are now being applied to other Livermore research endeavors.

The next step for the team, which also includes Edward Kuhn, Victoria Lao, Saphon Hok, and Tuan Nguyen, is continued testing and refinement of the LLNL-02 antidote and identifying a second potential candidate molecule. The team ultimately hopes to get LLNL-02 approved by the Federal Drug Administration (FDA), which would be a first for the Laboratory. “Drug approval by the FDA is a long and arduous process,” says Valdez. “It would be a significant, and potentially life-saving, accomplishment.”