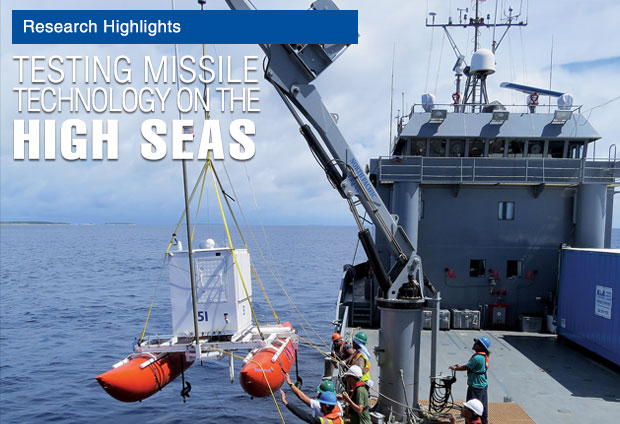 Making a high arc southwest over the Pacific Ocean, a Minuteman III test missile with no nuclear materials aboard aims at a point just offshore of a small island in the Kwajalein Atoll. Launched from Vandenberg Air Force Base on the California coast, the warhead detonates just above the water. A little more than a dozen rafts packed with diagnostic instrumentation are waiting in a scattered array around the target area.

Measuring crucial impact parameters, these rafts form the core of the LLNL (Lawrence Livermore National Laboratory) Independent Diagnostic Scoring System (LIDSS). Designed, built, and deployed by a Livermore engineering team, LIDSS is unique in the flight-testing community—assisting the U.S. Air Force and Navy in evaluating the accuracy of intercontinental ballistic missiles (ICBMs) and other conventional delivery systems that are crucial to maintaining a viable U.S. deterrent.

Lawrence Livermore’s foremost responsibility is to ensure the safety, security, and effectiveness of the nation’s nuclear arsenal. LIDSS helps the Laboratory fulfill this mission, as the collected data are provided to the Department of Defense (DOD) for validating that the missiles carrying the warheads perform to expectations. “Imagine building a car and parking it in a garage for 30 years and then suddenly needing to drive it across the country,” says Livermore mechanical engineer Steven A. Jensen. “The question is ‘will it work?’ We help provide the answer.”

A Test of a Stockpile Element

Jensen is the leader of Livermore’s Flight Test Group, better known to its DOD customers as the LIDSS team. “Every year, warheads and missiles are randomly pulled from the stockpile as part of system surveillance. The special nuclear material is removed from the warheads and then they are reassembled for flight tests,” says Jensen. “We work with the Air Force and Navy to test them. The Air Force, for example, fires three to four ICBMs per year from Vandenberg toward the Marshall Islands. The surveillance program ensures that the systems function as designed and arrive at the designated target area as expected.” The Livermore group also works with the Air Force to score cruise missile tests at the Dugway Proving Grounds in Utah. (Cruise missiles fly close to the ground at relatively low constant speeds, while ICBMs such as the Minuteman missile are designed to fly to long-distance targets.) Since 1990, the Flight Test Group has participated in more than 60 missions.

Back in the early days, ICBM tests targeted points on land, and rafts were not needed. Eventually, the targets were relocated to water entry points, and the need for autonomous rafts to carry the diagnostics was born. In addition, LIDSS allowed the Air Force to vary the distance the missiles traveled and adjust the reentry parameters. 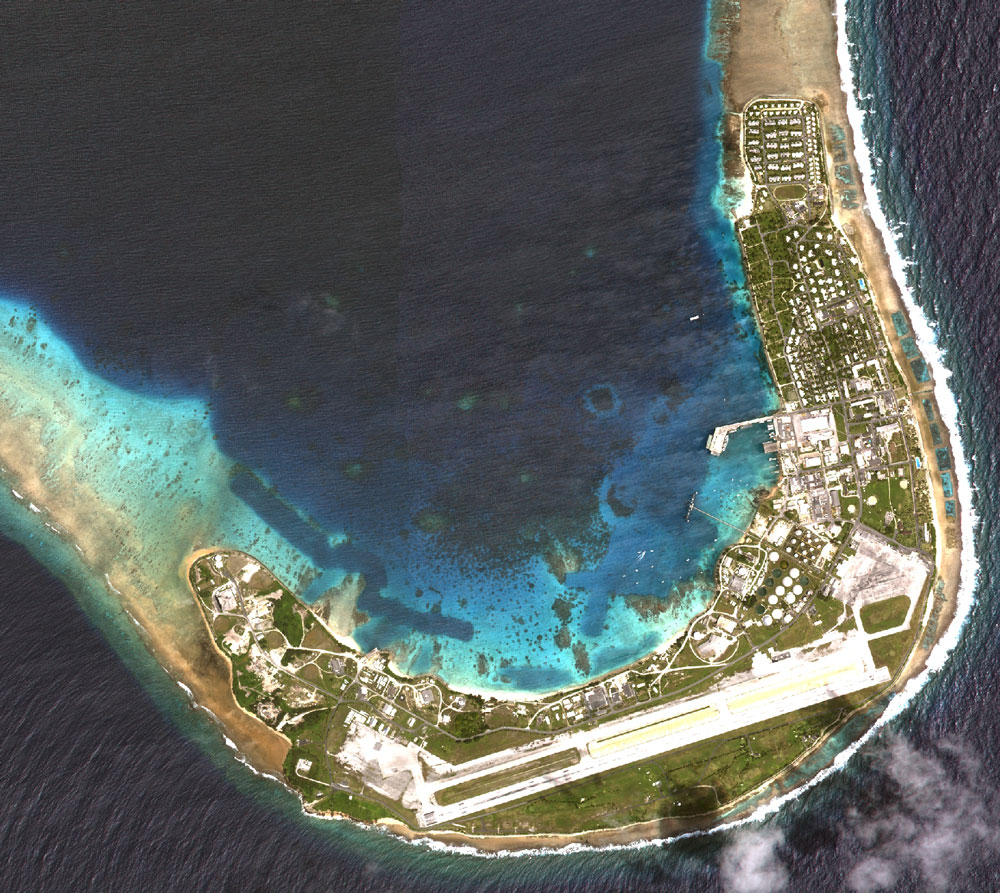 Kwajalein Island, which is part of the Kwajalein Atoll in the Republic of the Marshall Islands, is home to U.S. Army Garrison Kwajalein Atoll and the Ronald Reagan Ballistic Missile Defense Test Site. (Image courtesy of USGS.)

In a typical test, a Minuteman III missile travels more than 7,700 kilometers toward the island of Illeginni in the Kwajalein Atoll. As the last of three stages drops off during the missile’s trajectory, only the missile bus, carrying the warhead, is left. By design, the warhead spins up after release from the bus and heats up as it enters the atmosphere. Most often the warhead is designed to detonate its high explosives just before it enters the water.

Prior to detonation, LIDSS rafts capture images that aid in assessing such parameters as the warhead height of burst, reentry angle, location relative to target, and other performance criteria. The rafts are outfitted with equipment such as high-speed, streak, and high-definition video cameras, as well as hydrophones, microphones, and telemetry equipment that record key information about the overall performance. LIDSS rafts maintain their position in the water thanks to a global positioning system–based control setup developed by members of the team.

Within two hours of reentry, the Livermore team can provide its DOD customers with a preliminary score of the missile–warhead performance and accuracy. The team then retrieves the rafts, takes the data back to Lawrence Livermore, and provides a more detailed report in the following weeks. Although the performance score was once measured in terms of how close the warhead landed to its target, today it consists of various performance indicators from different LIDSS instruments. Says Jensen, “The ‘independent’ in the LIDSS name stands for the fact that different types of measurements provide an independent check on scoring accuracy and build a more robust picture of a system’s performance.” 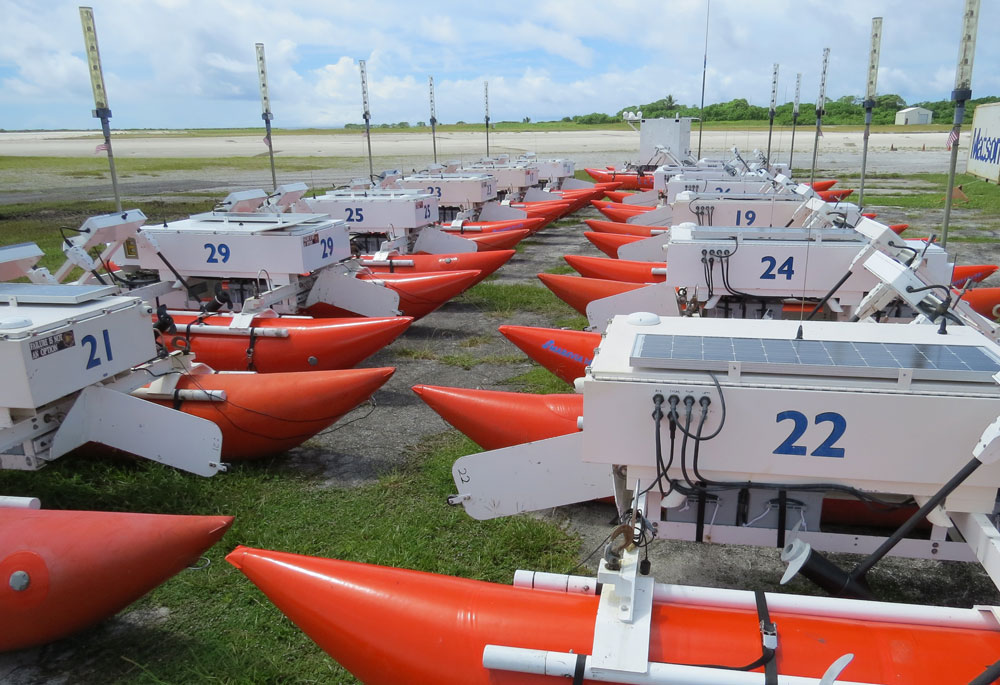 The LIDSS rafts at Kwajalein Island await transport to the area where they will gather data during the next test of a Minuteman III missile.

Life on a Remote, Tropical Island

Three or four times a year, Jensen and other members of his group spend 48 hours traveling to the Kwajalein Atoll, one of the largest coral reef atolls in the world. Part of the Republic of the Marshall Islands (RMI) in Micronesia, Kwajalein Island within the atoll is home to U.S. Army Garrison Kwajalein Atoll and the Ronald Reagan Ballistic Missile Defense Test Site. The island base, leased from the RMI government, is populated by more than 1,200 U.S. military staff and contractors. A crescent-shaped reef about 2.5 square kilometers in area, Kwajalein Island is home to a complete community with housing, a post office, a bank, and a modest grocery store, but not much else. “You can bike from one end of the island to the other in about 15 minutes,” says Jensen. Biking and walking are the island’s primary modes of travel.

A Livermore team deployment to Kwajalein Island usually lasts 18 to 20 days. Setting up a test requires 7 to 10 days, a process that includes preparing the test equipment, evaluating the rafts, and loading them aboard the United States Army Vessel (USAV) Great Bridge, an Army landing craft used to transport cargo around the atoll. “Significant planning goes into these tests—for example, where to place the rafts, the diagnostic setup, and camera coverage. Extensive preparation is done before leaving on the mission and for setting up all the mission logistics,” says Jensen.

USAV Great Bridge, with several Livermore team members aboard, sails to ocean test sites near the island of Illeginni, which is about 48 kilometers from Kwajalein Island. The ship lays out the LIDSS rafts at the test-site location and then sails at least 16 kilometers away to a safe position during vehicle reentry.

Many things can happen during the setup for a test beyond uncooperative equipment, including weather delays. During a 2015 mission targeted to an area of open ocean far from any land (referred to as broad ocean area or BOA), the Navy mobile instrumentation ship, tasked with delivering the LIDSS rafts, encountered a tropical storm on the way to the test site and then had to ride out a super typhoon on the way back. Delays can also happen when civilian ships, such as fishing vessels, pass too close to the reentry point for their safety, necessitating a hold on the test until they leave the area.

Eventually, a missile flies, measurements are taken, and the USAV Great Bridge sails back into the area to collect the rafts. The conclusion phase lasts three or four days while equipment is disassembled and stored before the team flies home. Livermore team members can be aboard the vessel during these BOA missions for as long as two weeks. 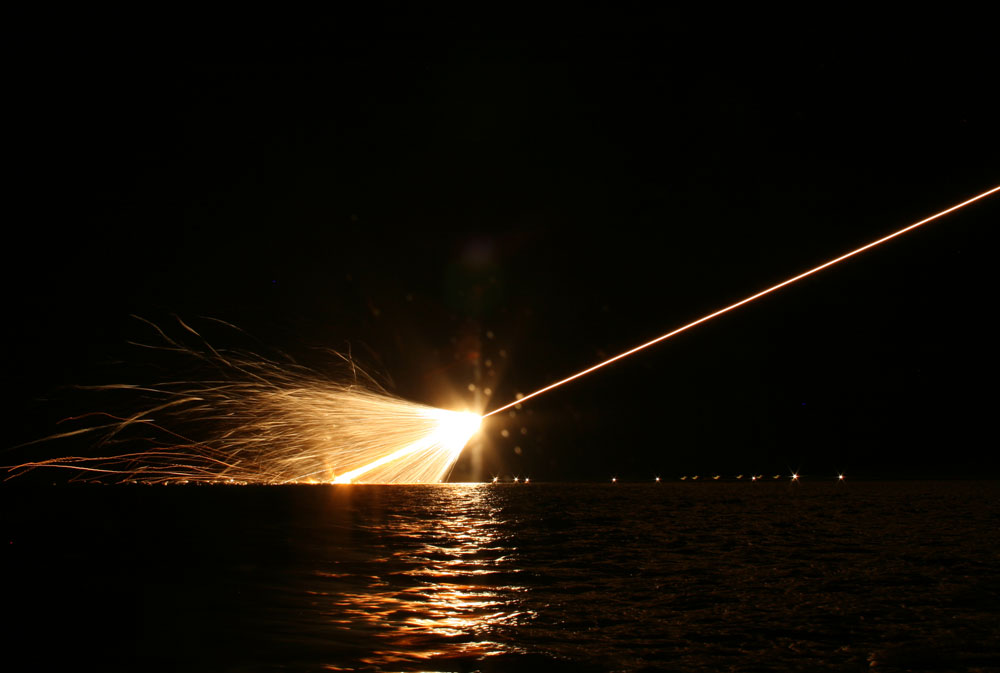 The reentry of a Minuteman III missile without its nuclear package—launched from Vandenberg Air Force Base in California—occurs near Illeginni Island in the Kwajalein Atoll.

As DOD begins to develop hypersonic delivery systems for conventional weapons, the demand for LIDSS continues to increase. “Originally, we developed this capability primarily to support the nation’s nuclear weapons community,” says Jensen. “However, our capabilities also cater well to the conventional side.” Over the next several years, the Flight Test Group, currently about a dozen members in size, will grow to meet the needs of its customers.

Jensen and his colleagues are also working to add new technologies to LIDSS. For example, the team is looking to expand LIDSS diagnostic vehicles to include drones, which are smaller, nimbler, and more cost-effective than the rafts. These devices would be used to augment the existing raft fleet on key missions. Jensen says, “The rafts provide a nice platform from which to field diagnostics. We are always looking to leverage current technology to provide even more data for our customers.”