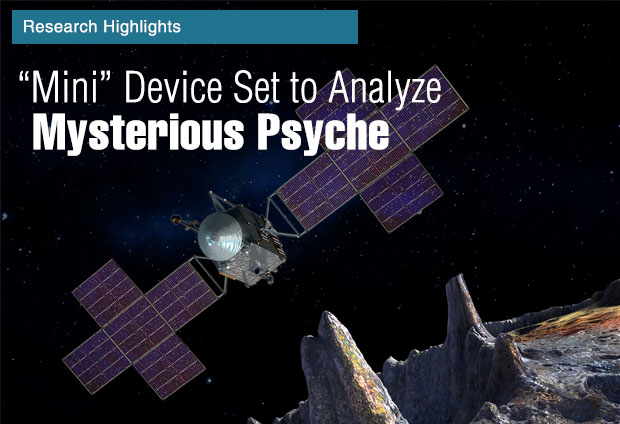 The Psyche mission will allow scientists to observe, for the first time, a planetary body made of metal rather than rock or ice. (Image courtesy of NASA's Jet Propulsion Laboratory.)

A few hundred million kilometers from the Sun orbits a large, metal mass that may answer the age-old question of how planetary bodies formed. The mass is the 16-Psyche asteroid, named in 1852 after the Greek goddess of the soul and its recognition as the 16th asteroid discovered in space. Psyche resides in the asteroid belt between Mars and Jupiter, and unlike typical asteroids that are composed of rocky materials, Psyche appears to be metal—mostly iron and some nickel.

Scientists are eager to explore the asteroid because its unique metal exterior suggests something phenomenal. “Theoretically, the best explanation for a 200-kilometer iron ball to be floating around in space is that it could be the remnant core of an early planet,” explains Livermore physicist Morgan Burks. As part of a NASA Discovery Program mission, Burks is leading a team to develop an instrument for analyzing Psyche’s composition. “Exploration of Psyche may increase our understanding of the hidden, inaccessible cores of Earth, Mars, Mercury, and Venus,” says Burks. The research could also provide insight into how a planet’s layers, such as crusts and cores, separate. 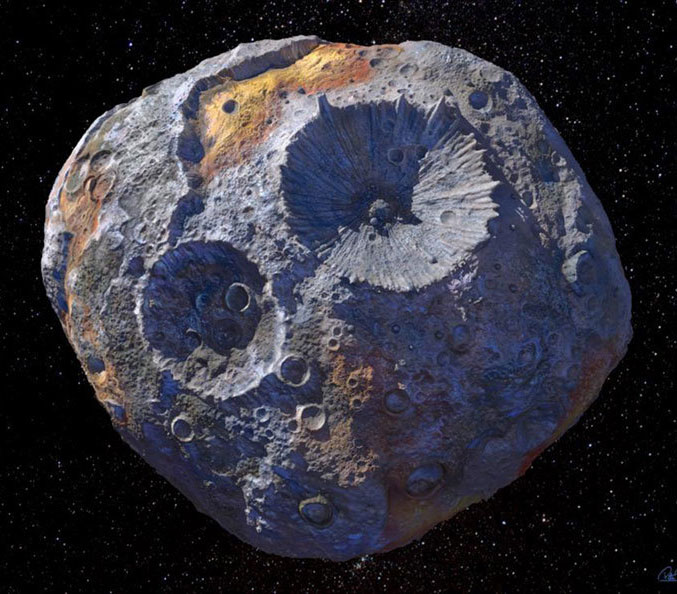 Psyche is hypothesized to be an exposed planetary core containing iron, nickel, and other metallic elements. (Image courtesy of NASA's Jet Propulsion Laboratory.)

The Psyche mission, which includes project lead organization Arizona State University, NASA’s Jet Propulsion Laboratory, and the Johns Hopkins Applied Physics Laboratory, marks the first time scientists will explore a “world made of metal,” rather than ice or rock. Livermore scientists are designing and building a gamma-ray spectrometer, called GeMini-Plus—one of several key instruments that together will help determine the asteroid’s elemental makeup as well as its gravitational field, magnetic field, and geological features. GeMini-Plus will be combined with a neutron spectrometer developed by Johns Hopkins to characterize the asteroid. “Psyche’s surface releases a large number of gamma rays that are induced by cosmic-ray bombardment,” says Burks. “Each element gives off a unique gamma-ray signature. By measuring the energy of the gamma rays with high resolution, we could determine the composition of the asteroid’s surface.” GeMini-Plus will be the second gamma-ray spectrometer designed and built by the Laboratory for space exploration within the past 15 years.

Origins of a Novel Spectrometer

The original GeMini, developed by Burks, uses a germanium detector (hence the “Ge” in GeMini) to identify and analyze gamma rays emitted by radioactive materials for determining their elemental and isotopic composition. (See S&TR, Gamma-Ray Spectroscopy in the Palm of Your Hand.) Compared to other substances that can be used to detect gamma rays, germanium offers the best resolution. However, in the past, this resolution came at a cost, because the germanium must be cooled to extremely low temperatures (around ‑200°C) using liquid nitrogen. “Although liquid nitrogen is readily available in a laboratory environment such as at Lawrence Livermore, the substance is impractical or even impossible to obtain in the field, especially in an emergency situation,” says Burks.

To overcome this challenge, Livermore scientists combined an innovative ultraminiature cooling system (hence the “Mini” in GeMini) with an infrared shielding mechanism. This mechanically cooled system, the first of many innovations that culminated in the advanced detector, does not require liquid nitrogen and is both fieldable and highly effective. Other features include rugged construction, low power consumption, automated operation, and small size—characteristics that are needed for both handheld devices and space applications. Burks says, “A synergy exists between the gamma-ray spectrometer we send to space and an instrument we use to try to prevent radioactive material from being smuggled into the country.”

GeMini’s predecessor was successfully tested in space in 2004, when NASA launched the MESSENGER spacecraft to Mercury. MESSENGER’s goal was to characterize Mercury’s surface and answer key questions about the solar system’s second-densest planet. A first of its kind, the Livermore-developed gamma-ray spectrometer had to be rugged to survive the extremely high temperatures at its destination, among other requirements. The mission produced new insights about Mercury, such as its naturally occurring radioisotopes and extensive volcanic activity. Burks transitioned the gamma-ray spectrometer on MESSENGER to the commercially fieldable GeMini for national security applications and, more recently, the GeMini-Plus. 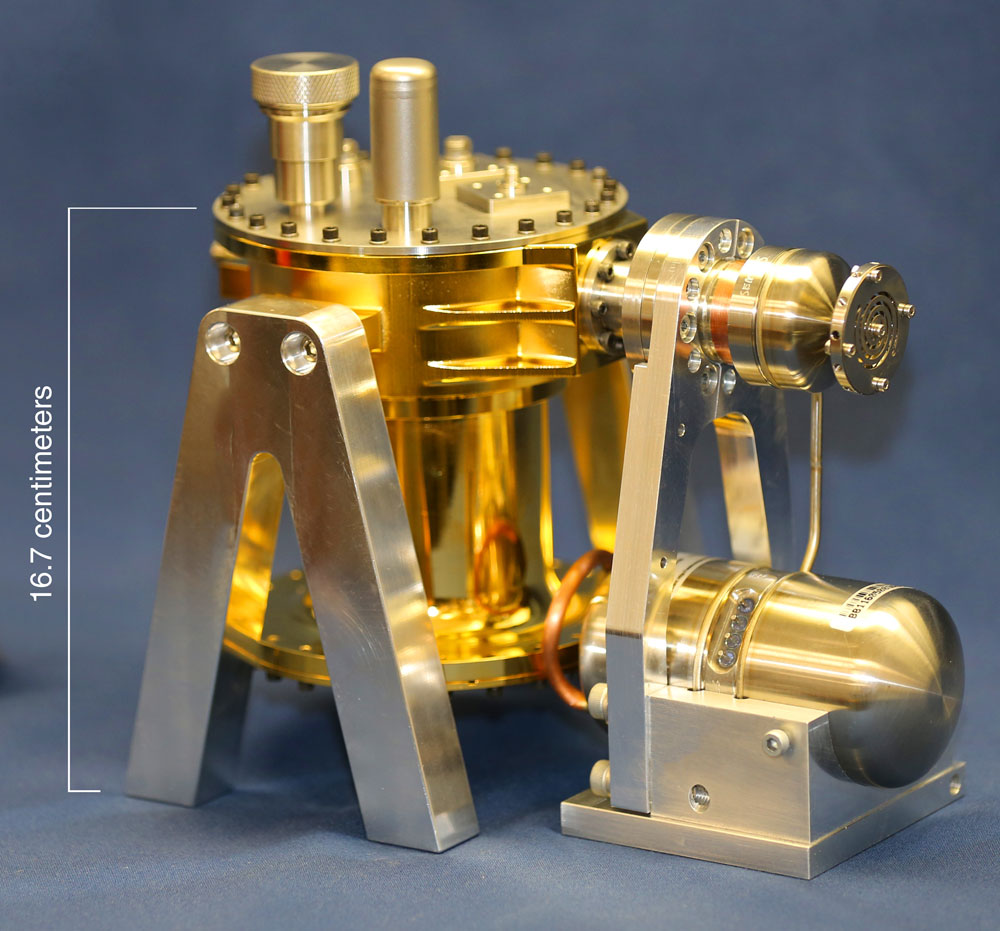 GeMini-Plus is an improved, simplified, and more rugged version of the original GeMini gamma-ray spectrometer. The enhancements make the device more versatile than its predecessor.

Although the gamma-ray spectrometer onboard MESSENGER had to be optimized for Mercury’s harsh environment, the same requirements were not necessary when planning a visit to Psyche. The asteroid’s location much farther from the Sun freed scientists from the stringent thermal-shielding requirements of the previous mission. “Compared to its predecessors, GeMini-Plus has an improved, simplified, and more rugged design, allowing for greater versatility,” says Burks.

Once in space, GeMini-Plus will measure gamma rays emitted from the surface of Psyche as a result of cosmic-ray bombardment. The gamma rays will interact with the germanium inside the detector, liberating electrons in proportion to the gamma rays’ energy. GeMini‑Plus will collect the emitted electrons using an electric field applied to the germanium, and the data will be sent for analysis via specialized electronics to scientists on Earth, who will use the information to identify the material emitting the gamma rays. 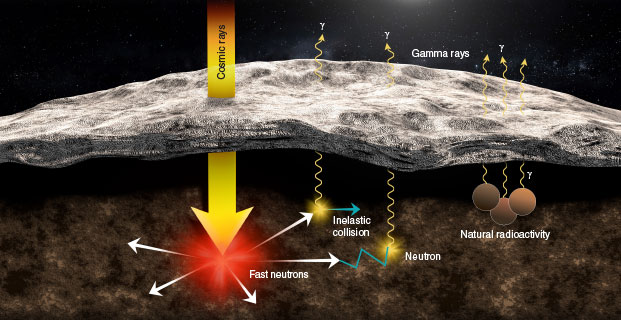 When high-energy, cosmic rays bombard the surface of Psyche, gamma rays are emitted from the asteroid through processes such as inelastic collision and neutron capture. GeMini-Plus will measure the energy of the gamma rays with high resolution, helping scientists to identify the asteroid's composition. (Rendering by Veronica Chen.)

The Psyche mission will launch in 2022, with a projected arrival to the asteroid in 2026. To ensure GeMini-Plus is ready for the long trip, Livermore scientists will conduct various quality assurance tests: vibration testing to check the device’s ability to survive a rocket launch that generates 35 G (gravitational forces), thermal testing to validate that it can operate in a range of temperatures, and performance testing to check its resolution. Livermore will then release the detector to Johns Hopkins researchers for integration with spacecraft flight electronics, after which it will be sent to NASA for further testing. Says Burks, “Designing an instrument for a deep-space mission requires incredible attention to detail. The instrument will be hundreds of millions of kilometers away when it is turned on, and it must work. Unlike a terrestrial instrument, we have no way to repair the hardware in space.”

Coincidentally, the Psyche spacecraft will arrive at the asteroid at approximately the same time as another planned NASA spacecraft utilizing GeMini-Plus—one that is part of a 2024 mission to the moons of Mars. The goal of the mission is to gather information about the moons’ surfaces and how they originated, but with an exciting addition. The Mars probe will procure a sample from one of the moons that will be brought back to Earth for analysis.

According to NASA scientists, the Psyche mission “offers a unique window into the violent history of collisions and accretion that created terrestrial planets.” As it happens, Lawrence Livermore’s expertise in gamma-ray spectroscopy offers a valuable capability for looking through that window. Livermore is currently the only laboratory that can obtain the necessary high-resolution data with such a low-mass, low-power device. “The technologies we are developing have a wide range of applications on Earth and in space,” says Burks. “Devices produced for basic science research can also be applied to important national security applications. In turn, the national security advances we achieve help us further basic science.”

From the gamma-ray spectrometer for MESSENGER, to GeMini, and finally GeMini-Plus, gamma-ray detection technology has given a boost to national security and made charting new territories possible. With its launch on the horizon, the Psyche spacecraft, incorporating GeMini-Plus, will provide a closer look at a remarkable planetary body and its origins, helping scientists to potentially solve some of the biggest mysteries about the formation of planets in our universe.