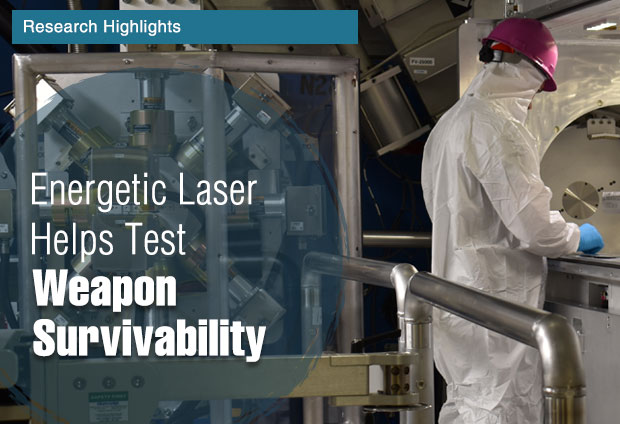 A technician at the National Ignition Facility (NIF) prepares to load a sample into a specialized holder that will extend into the 10-meter-diameter target chamber for testing. (Photo by Brent Blue.)

Established after the halt of underground nuclear testing, the Stockpile Stewardship Program is a critical element of the National Nuclear Security Administration’s mission to ensure the safety, security, and effectiveness of the U.S. nuclear deterrent. As part of this program, scientists are tasked with guaranteeing nuclear weapons’ survivability—that is, ability to function—under hostile conditions, such as those that could result from a pre-emptive strike by an adversary, or when a conventional war may be fought in a nuclear environment.

In the absence of nuclear testing, high-energy-density (HED) facilities, such as Lawrence Livermore’s National Ignition Facility (NIF), have become a key tool for testing the survivability of nuclear weapon components. NIF allows researchers to subject nonnuclear parts, such as electronics and other materials, from weapon systems to intense radiation from x rays and neutrons and to probe material properties at extreme pressures and temperatures—conditions that mimic what systems may face in a real-world nuclear environment. Brent Blue, the National Security Applications program manager at NIF, says, “Survivability is a chess game. The moves an opponent will make are unknown as are their capabilities. Trying to predict what an adversary might do now, let alone 30, 40, or 50 years out, during the lifetimes of these systems, is incredibly challenging. An effective survivability strategy requires one to account for myriad possible ‘what-if’ scenarios both now and in the future.”

Blue is part of a team at NIF that is implementing innovative methods for improving survivability experiments. For example, new target designs are serving as more intense sources of neutrons and x rays for maximizing the energy fluence through a test sample. In addition, specialized systems have been implemented for fielding samples closer to radiation sources, and novel diagnostics are recording essential data for determining how test materials are affected. These capabilities are providing new insights into weapon systems’ durability and are also enhancing several national security programs.

After a nuclear blast, an enormous flux of high-energy neutrons and x rays are emitted by the fusion reaction. NIF enables researchers to recreate this environment in a laboratory setting. “NIF is the most energetic laser in the world, which makes it capable of generating exceedingly bright sources of x rays. NIF is also the only facility that can generate intense sources of 14 megaelectronvolt (MeV) neutrons, which are characteristic of deuterium and tritium fusion,” says Blue. The 14 MeV neutrons penetrate deep into materials and deposit large amounts of energy that heat materials throughout. X rays, on the other hand, are used to rapidly heat the surface of a test material, generating a shock wave that travels through to the rear of the sample.

The effects of neutrons and x rays on weapon components are studied in separate experiments that use different types of targets. This approach allows the source of either product to be optimized for generating the maximum fluence—that is, the number of neutrons or x rays flowing through a sample per unit area.

In neutron-generating experiments, scientists use direct-drive targets—tiny plastic spheres ranging in size from 2 to 4 millimeters that contain room temperature deuterium–tritium gas. NIF’s powerful laser beams are focused directly onto the target to “drive” the fusion reaction by rapidly heating the capsule’s outer surface. Compared to other experiments that use an indirect means of heating the capsule, direct-drive targets are easier to field and can be positioned closer to a test sample, which allows higher fluence levels to be achieved.

Direct-drive targets are gas-filled capsules ranging in size from 2 to 4 millimeters that contain room temperature deuterium and tritium. When heated by the laser, these capsules generate powerful 14-megaelectronvolt neutrons for survivability experiments. (Photo courtesy of General Atomics.)

Targets used as x-ray sources are typically low-mass, thin-walled gas pipes containing materials that give off specific x-ray energies. “When the laser heats a target material, the x-ray energies emitted from the source are dependent upon what atomic element was used to make it,” says Blue. For example, krypton gas predominantly gives off x rays at 13 kiloelectronvolts (keV). Argon and xenon generate x rays in the 4 to 5 keV range, and silver rises to approximately 22 keV. Researchers step through experiments with different x-ray energies to systematically evaluate x-ray effects on a sample. Together, data gathered from both neutron and x-ray experiments provide researchers with a comprehensive look at how weapon components may respond within an intensely radiative environment. 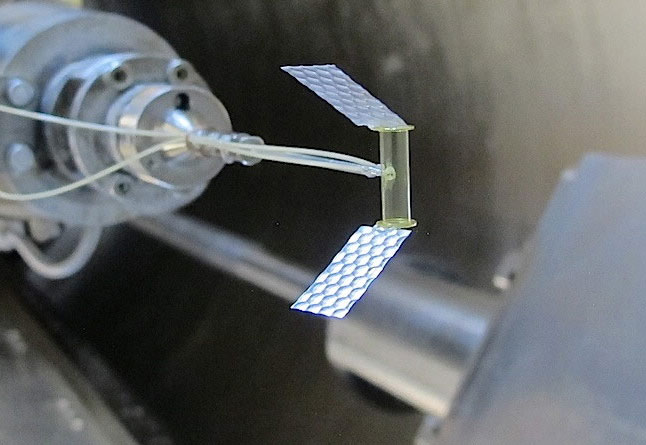 A thin-walled gas pipe positioned at the end of a target positioner is used as a source for high-energy x rays.

Inside NIF, a wide range of diagnostics is used to measure and record experimental data. Blue and a team of NIF physicists and engineers recently added to the suite of instruments when they developed and implemented the Sentinel diagnostic—so named because of its resemblance to the squid-like “search-and-destroy” machines in the “Matrix” films. “To obtain the measurements we needed, we had to make a new diagnostic,” says Blue, who along with the team, designed, built, and deployed the tool in just three months.

Sentinel is a 16-channel line-of-sight x-ray spectrometer mounted in a diagnostic instrument manipulator (DIM) on the equator of the NIF target chamber. (A DIM is a two-stage telescoping system for positioning a diagnostic package within the target chamber and enables diagnostics to be exchanged for different experiments.) The instrument works in conjunction with the Dante diagnostics—two broadband, time-resolved x-ray spectrometers that measure the x-ray flux emitted by the target. Throughout an experiment, Sentinel measures x-ray output at the target’s equator, while the Dante systems are permanently located off the equator toward the target chamber’s north and south poles. X-ray diodes within the detectors determine the x-ray yield from the targets, and each diode is filtered to record the x-ray power in a specific part of the spectrum. 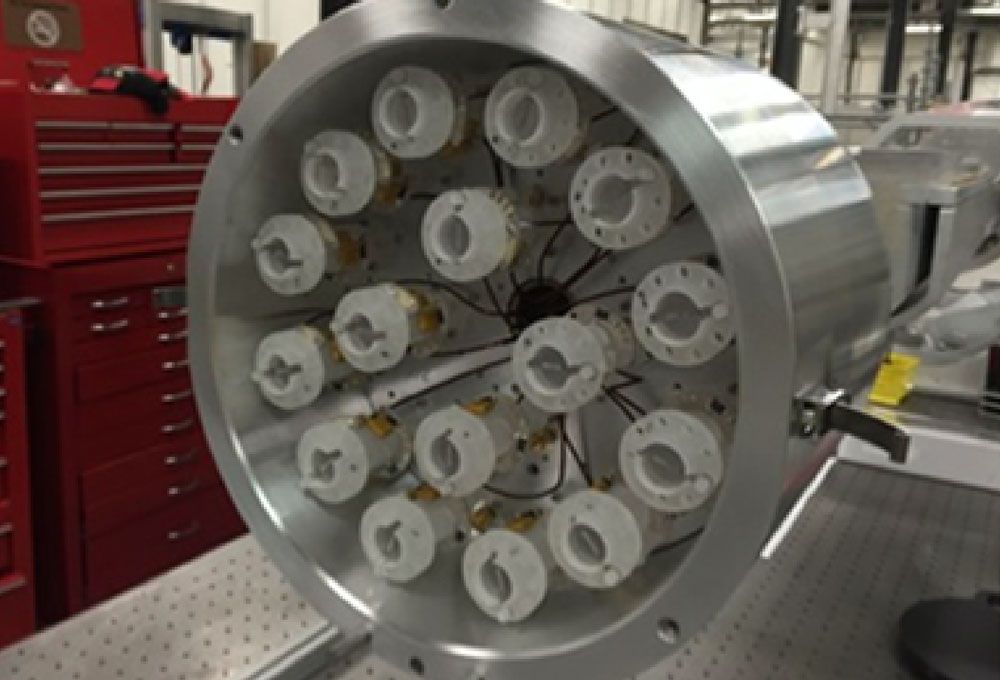 The Sentinel diagnostic is a 16-channel line-of-sight x-ray spectrometer mounted in a diagnostic instrument manipulator (DIM). During an experiment, it measures x-ray output from a source at the target's equator.

When fielding an experiment, test samples are placed in the XTRRA (x-ray transport and radiation response analysis) diagnostic assembly, which can carry up to six exposed samples in a single shot. XTRRA is attached to the “snout” of a target and instrument manipulator (TANDM)—a combination diagnostic inserter and target positioner. The snout is the end of the instrument positioned closest to the source. Behind each sample is a stress gauge and an interferometer that help determine peak stress and ablation pressure in the material generated by the x rays produced during the shot. The assembly also contains three calorimeters that measure the total x-ray energy.

Sample positioning within the NIF target chamber is always a tradeoff. Samples close to the source receive a larger dose of radiation and must be smaller in size to ensure even irradiation. Moving the sample farther away allows for more uniformity but sacrifices fluence. Unlike typical fusion and HED experiments that have timescales of interest in the nanosecond (billionths of a second) range, for survivability experiments, scientists are concerned with timescales 1,000 to 1,000,000 times longer. As a result, data are recorded just before the laser is fired to a second or more after, allowing for observations of the materials as they heat up and cool down.

Target area operators remove the XTRRA (x-ray transport and radiation response analysis) diagnostic assembly from a DIM following an experiment. The six areas where samples can be loaded are shown in the center of the assembly. (Photo by J.P. Javier and Juan Soto.)

Although survivability experiments subject samples to exceedingly high neutron and x-ray yields, precautions are taken to ensure the samples remain intact. “The very nature of weapons’ survivability is ensuring that the systems still function long after the engagement,” says Blue. “Similarly, in experiments, we do not want the test samples destroyed. Rather, the samples are recovered for post-test analysis.” Once a sample is retrieved, its strength and deformation can be evaluated, and researchers can inspect cross sections of the samples for microstructural changes. 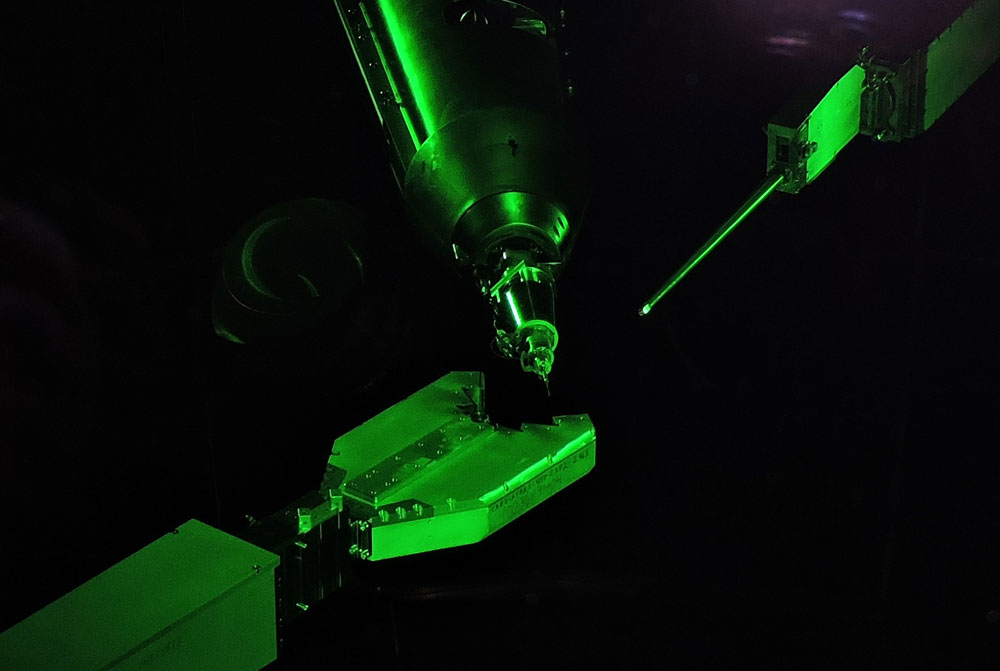 This setup for a survivability experiment inside the NIF target chamber shows the XTRRA diagnostic assembly containing the samples (bottom), the target positioner (top center), and a time-resolved x-ray spectrometer for recording data (top right). (Photo by Dan Linehan.)

Experimental and post-testing data also serve as critical input for computational models that are used to evaluate, validate, and visualize what happens during a test. The test–model cycle continues as additional tests are conducted, and thus more data become available. “Computer models are always approximations, but what we want to know is how good the answers are and whether they are good enough,” says Blue. “Experimental facilities, such as NIF, allow us to test the models and push them beyond their limits. Learning comes from achieving a slightly different answer and then figuring out the reason behind it.” Soon Blue will have plenty more data with which to push those models. In 2015, nearly 20 NIF shots were dedicated to survivability, while in 2019, that number will almost triple to 59 planned shots.

As the nation’s stockpile continues to age, survivability testing will remain a key component for stockpile stewardship to ensure that these decades-old components and systems will remain safe, reliable, and effective. “To provide a credible strategic deterrent, nuclear weapons and delivery systems must be survivable against current and future offensive and defensive threats,” says Blue. “Survivability and HED science are vitally important to national security.”