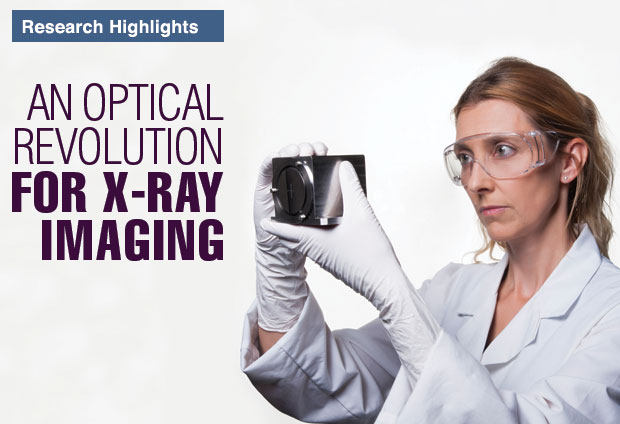 An Optical Revolution for X-Ray Imaging

Weighing nearly 4 kilograms, the first portable digital camera was built in 1975 and offered photographers the ability to capture black-and-white images with a resolution of .01 megapixels. Today, technological advancements have made it possible for people to carry much smaller, lighter, and significantly higher resolution cameras in their pockets (a standard smartphone camera is 8 megapixels). Such a remarkable jump in capability is what scientists at Livermore are aiming to achieve for x-ray imaging. 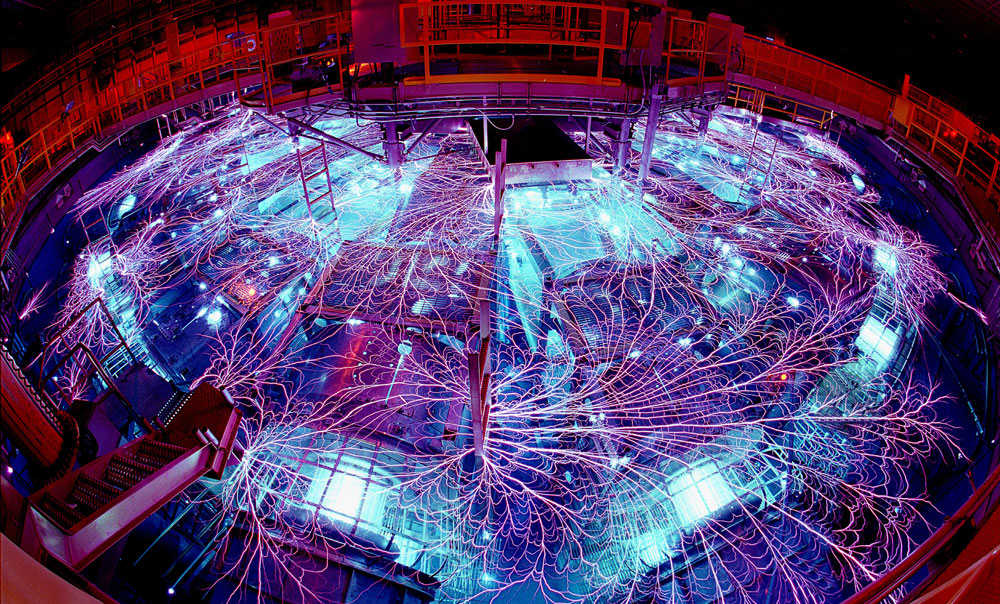 Wolter optics were first developed by the German physicist Hans Wolter in the mid-20th century. Characterized by two conical grazing incidence mirrors, the optics reflect x rays at shallow angles, allowing the image of an object under observation to be focused as a sharp image onto a detector. Originally designed for implementation in x-ray microscopes, the optics were ultimately realized in a more accessible telescope design for applications in astronomy. However, recent advances in fabrication techniques have allowed the optic to be adapted for microscopes as Wolter initially intended.

Wolter’s innovation—joining together two mirror surfaces with different curvatures—makes the optic’s field of view considerably wider and also suppresses several intrinsic optical effects that degrade the image quality, allowing for a larger margin of error when pointing at an object. Says Vogel, “The Wolter setup provides a sharp image even if the source is not located right on the system’s optical axis.” Out of three potential Wolter designs (called Wolter types I, II, and III), scientists have primarily used Wolter type I, which has properties similar to a thin lens. With this design, multiple mirrors could be “nested” inside one another, similar to a Russian matryoshka doll, to increase the reflective surface area of the optic. This design is also the most suitable for use in the Z machine.

This diagram shows the Wolter microscope fielded on the Z machine. (inset) The optic consists of hyperboloidal and ellipsoidal mirrors that enable a wider field of view and help focus the x rays onto an image plane. Multilayer coatings on the mirrors' surfaces improve their performance.

During previous experiments using the Z machine, a traditional time-integrated pinhole camera funneled x rays through a tiny aperture to create two-dimensional (2D) images of the x-ray sources under investigation. However, these images were usually low-resolution approximations, inhibiting scientists’ ability to capture key details from the tests. When developing the Wolter microscope, Vogel’s team first had to ensure that the optical requirements determined by Sandia scientists were met. For example, spatial resolution had to be better than 100 micrometers over a field of view that is 5 by 5 by 5 millimeters cubed. Other considerations included the spectral response of the optic and its efficiency, which was tailored to the photon energies present in the experiment. Space constraints within the facility were also a factor. Using these criteria, the team defined the conic parameters of the optic to achieve the desired field of view, spatial resolution, and energy response, and then created hyperboloidal and ellipsoidal mirrors with those parameters using replication—a fabrication technology advanced by NASA MSFC.

Although the geometric design of the Wolter optic largely determines its spatial resolution and field of view, spectral response and throughput (the number of photons that pass through it) can be enhanced by depositing multilayer coatings onto the mirrors’ surfaces. “The resolution of traditional pinholes can be improved by making them smaller, but that means fewer photons can pass through the aperture,” says Vogel. “Wolter optics decouple these two quantities.”

To increase the throughput and tailor the energy response to experimental needs, scientists deposit alternating thin layers of high-mass (reflector) and low-mass (spacer) materials onto a mirror to enhance its reflectivity. Vogel explains, “Essentially, x rays are not reflected with normal mirrors, and metallic coatings do not work well at energies greater than approximately 10–12 kiloelectronvolts. Multilayers enhance reflection using constructive interference, allowing more reflectivity at higher energies.” Vogel and the Livermore team ultimately decided on multilayers made of tungsten and silicon based on the materials’ well-studied properties.

The multilayers can also be customized for an experiment to study a particular energy range. “You can apply the multilayer coating to the Wolter optic to control the photon energy spectrum under examination,” says Louisa Pickworth, leader of the X-ray Measurement and Diagnostic Science group at Livermore’s National Ignition Facility (NIF). “The result is an energy-banded image—similar to a color-coded filter—rather than a broad range of spectral content,” she explains.

A key innovation for this project was developing a method for depositing the multilayer film onto the inner surface of the small-sized optic needed for the Z machine. The Harvard-Smithsonian Center solved this problem by innovating an indirect coating technique. Rather than replicating a mirror shell directly on a mandrel and then coating it—the standard process for larger optics—the new process coats the mandrel with the multilayer first, and then the optic shell is electroformed on top. The mandrel, with optic shell and multilayer in place, is then placed into a cold bath, wherein the shell and the multilayer are released together from the mandrel as a result of thermal expansion. Using this technique, the team could create an optic with the right amount of reflectivity.

Initial tests at Sandia's Z machine have shown that the spatial resolution of x-ray images achieved with the Wolter microscope (left) is significantly better than that produced using a traditional pinhole camera (right).

The calibration process verifies that an optic works as expected and allows scientists to characterize its performance. During this time, scientists study the system’s spatial resolution and throughput, as well as determine the ideal distance from the source to the optic and the detector.

At Livermore, scientists created a calibration system in which the Wolter optic, an x-ray point source, and a charge-coupled-device (CCD) camera are placed on stages inside a lead-lined box. Each element can be precisely aligned and adjusted as needed. During calibration tests, the CCD camera records 2D images, while a spectrometer measures the energy and number of x rays produced. The x-ray source is moved around to sample different points in the optic’s field of view, and scientists use both the CCD images and spectrometer output to evaluate the Wolter optic’s performance. “We want to sample the most points possible with a known x-ray source to produce a map of the optic’s performance over its field of view,” says Livermore x-ray physicist Bernie Kozioziemski, lead designer of the calibration system. “We are essentially simulating the source for the Z machine.”

Sandia scientists use the calibration information to precisely position the optic within the full instrument system they designed and built for experiments on the Z machine. Initial tests have demonstrated x-ray results that surpass the performance of conventional diagnostics at the high energies studied. The next iteration of the Wolter optic is expected to achieve resolutions down to the desired 100 micrometers. 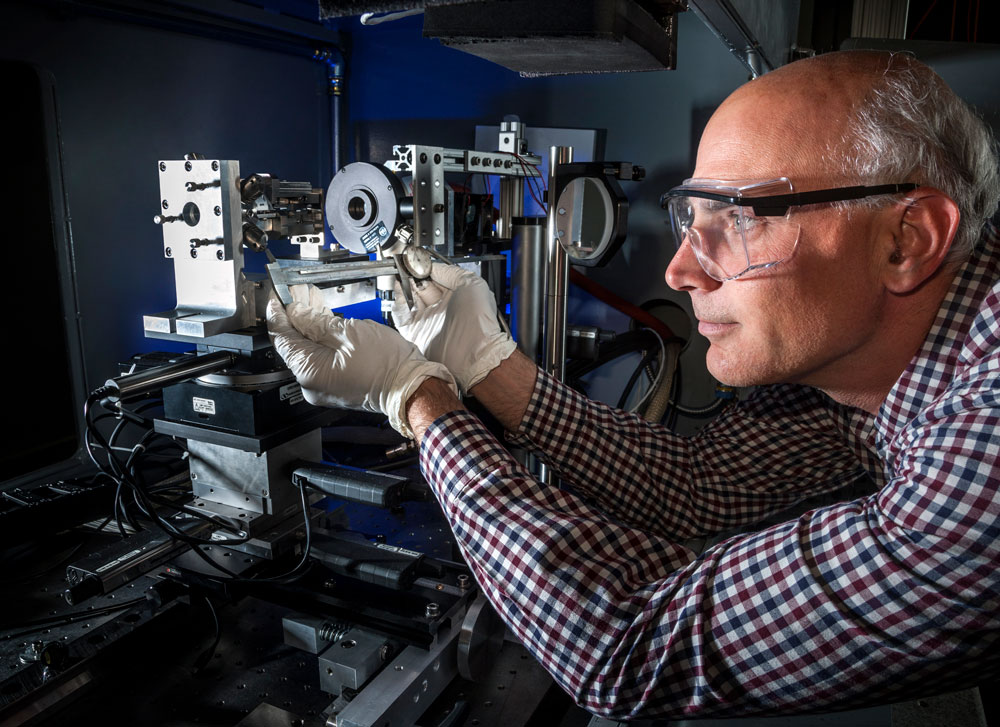 Laboratory physicist Bernie Kozioziemski sets up the Livermore-developed calibration system for testing the performance of the Wolter microscope. During tests, a charge-coupled-device camera records two-dimensional images, while a spectrometer measures the energy and number of x rays produced. (Photo by Randy Wong.)

Vogel and the team eventually plan to integrate the Wolter optic into NIF, where the imaging specifications are much more stringent—better than 5 micrometers. “A challenge at NIF is detecting hard x rays greater than 50 kiloelectronvolts,” says Pickworth. “Hard x rays tend not to interact with detectors—so many photons must be collected to sense them. We can improve detectors by either making them more sensitive or by channeling more photons their way with more efficient imaging systems.” The first reflective optics developed for NIF (a Kirkpatrick–Baez microscope) can achieve a spatial resolution better than 5 micrometers, but this system collects fewer photons than a Wolter system would, limiting the highest energies it can view to approximately 13 kiloelectronvolts.

With a Wolter microscope, NIF could achieve the large collection efficiency and spatial resolution needed to image hard x rays. Pickworth says, “The ability to look at hard x rays would open experimental schemes that are inaccessible today. This capability could also be coupled with more advanced detector technology under development.” The team’s efforts for adapting the Wolter microscope to NIF include further fine-tuning the optic fabrication method and the multilayer coating. Pickworth emphasizes the importance of the optic for NIF in a way that only a scientist can. She says, “It will be a transformative technology.”