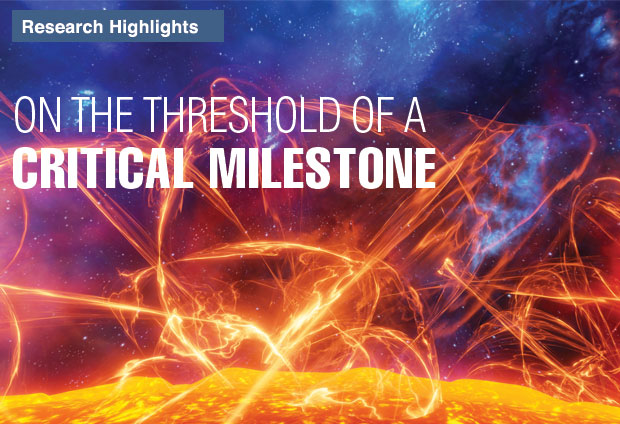 On the Threshold of a Critical Milestone

The 192-beam National Ignition Facility (NIF), the world’s largest and most energetic laser, supports the National Nuclear Security Administration’s Stockpile Stewardship Program and is a powerhouse for a broad range of scientific research. For decades, scientists have pursued inertial confinement fusion (ICF) as a means for achieving ignition—a fusion process by which self-heating generates more fusion heating than is lost to all cooling processes in the target’s fusion fuel. Recent experiments at NIF have shown that the “burning plasma” stage needed to reach this challenging goal may be within reach.

In ICF experiments, a deuterium–tritium (DT) fuel capsule is seated inside a gold or depleted uranium hohlraum, a cylindrically shaped device with open ends. NIF’s laser light striking the hohlraum walls generates a bath of x rays that causes the capsule to implode, heating and compressing the DT fuel into a central hot spot. Fusion reactions within the hotspot produce an alpha particle (helium nucleus) and a neutron. The number of neutrons generated characterizes the extent of the fusion process. For ignition to occur, enough alpha particles must be present to generate the heat needed to initiate further fusion reactions in the hot spot, creating a thermal runaway effect.

As part of a successful experimental campaign that took place over several months in 2017 and 2018, scientists at NIF successively produced record numbers of fusion neutrons. One of the experiments, conducted in August 2017, delivered 1.9 × 1016 neutrons—the highest yield to that point—and generated about 53 kilojoules (kJ) of energy (nearly double the previous performance). A subsequent shot in January 2018 further increased the output, producing 2.0 × 1016 neutrons and 55 kJ of energy.

The shots used an experimental platform aimed at controlling implosion asymmetries and hydrodynamic instabilities, thereby increasing the transfer of energy from the implosion to the DT fuel. Performance of the fuel capsules has improved to such a degree that scientists may be able to create a reaction in which the alpha energy deposited in the hot spot is the dominant source of heating the implosion—known as the “burning plasma” stage. Omar Hurricane, chief scientist for Livermore’s ICF program, says, “The people in magnetic fusion research have been working towards this achievement for 50 years.” 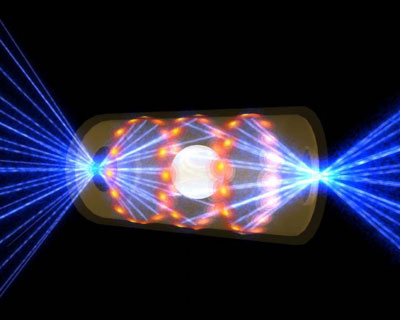 During inertial confinement fusion (ICF) experiments, laser light entering through either end of a hohlraum strikes the cylinder's walls and generates a bath of x rays that causes the target capsule to implode. Recent experiments feature target capsules made of high-density carbon (HDC) and a thin layer of deuterium–tritium (DT) fuel located just inside the outer shell.

The highly successful experimental campaign incorporated a number of promising features, including a shortened laser pulse for initiating the reaction, an improved fuel capsule material, modifications to the fill tube (used to transfer the DT fuel to the capsule), and a lower concentration of helium gas within the hohlraum (for controlling the plasma expansion). These changes enhanced the delivery of laser energy to the fuel capsule with better implosion symmetry and unprecedented implosion velocities, resulting in record pressures and temperatures, as well as neutron yields.

According to Hurricane, the experiments demonstrated that increasing the fusion fuel’s adiabat—that is, resistance to compression—yields a more controlled implosion that is closer to the calculations obtained from supercomputer simulations. However, the lack of compression was more than offset by higher implosion velocity—400 to 430 kilometers per second. “Increasing implosion velocity proved more important than changes to lower the adiabat, as codes had predicted,” says Hurricane. NIF physicist Cliff Thomas says, “Historically, we aimed for low adiabat to preserve the compressibility of the fuel, but the experimental data suggest that velocity provides the highest return on investment.” Thomas also notes that with greater laser energy, velocities of 500 to 550 kilometers per second are possible, but the implosion might then become unstable.

At the start of NIF ICF experiments in 2010, researchers adopted a “low-foot” laser pulse to try to obtain maximum compression. However, the low-foot pulse made the implosion more susceptible to instabilities that decreased neutron yield. Experiments beginning in 2013 used a high-foot laser pulse to create more stable implosions. (See S&TR, June 2014, A Significant Achievement on the Path to Ignition.) The high-foot pulse lasted 15 nanoseconds (instead of the 20 nanoseconds used in low-foot shots) and featured three main shocks instead of four. It also used a higher power initial pulse, called the “picket,” and a lower peak power, creating a stronger first shock in the foot, or trough period, of the pulse (hence the name high-foot pulse). These experiments proved more forgiving of imperfections in the fuel capsule and less susceptible to implosion instabilities that decrease fusion reactions. The result was improved understanding of implosion physics and important progress in addressing Rayleigh–Taylor instabilities that can tear apart material interfaces. 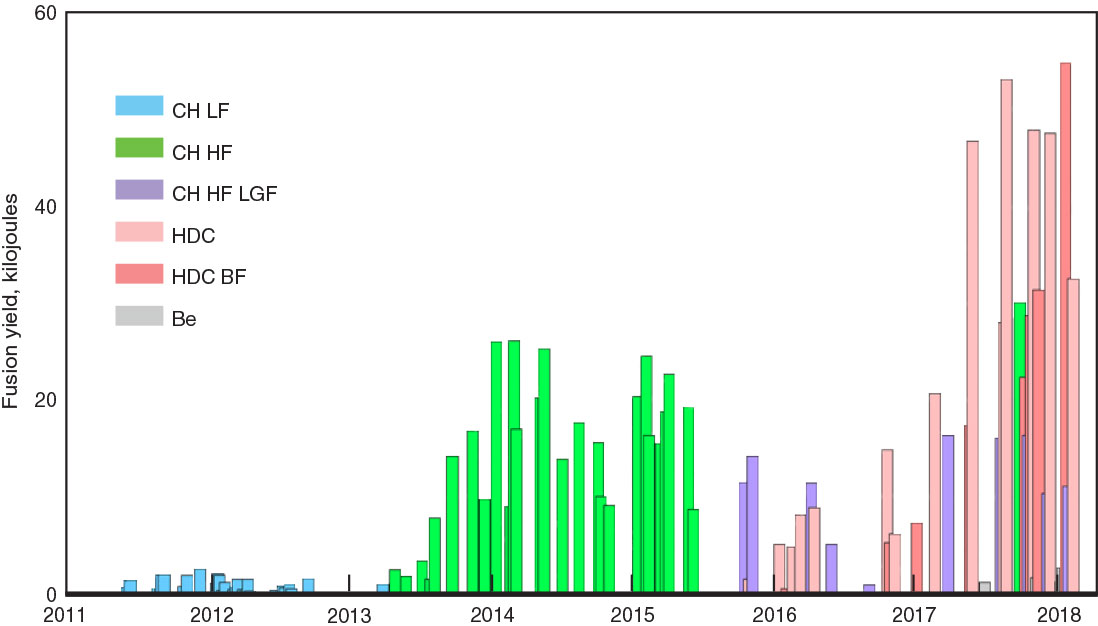 The ICF experimental campaign, which has included the low-foot (LF), high-foot (HF), big-foot (BF), and low gas-fill (LGF) platforms, has made steady progress by addressing challenges systematically. The recent record neutron yields stem from the use of HDC capsules rather than plastic (CH) or beryllium (Be), a shortened laser pulse, a lower concentration of helium gas fill, and a thinner fill tube, as well as enhanced understanding of the implosion process.

Applying this knowledge to the more recent ICF experiments, the research team fired a three-shock laser pulse (less than half the duration of pulses used in the high-foot campaign) lasting about 7 nanoseconds at the target. The precisely timed series of shocks propagated through the fuel capsule as it imploded. Some experiments adopted a strong initial shock, deemed the big-foot pulse, to drive a high-velocity implosion. A somewhat different strategy, called the HDC low gas-fill platform, used a more traditional pulse shape, similar to that implemented in the high-foot experimental series.

The 2017 experiments used an ultrathin, roughly 2-millimeter-diameter, high-density carbon (HDC) capsule that contained a thin layer of DT fuel located just inside the outer shell. HDC, or diamond, has a higher density than the plastic and beryllium shells previously used in ICF experiments. HDC allows for a shorter pulse that still reaches the same kinetic energy. “Material properties matter,” says Hurricane. “Diamond is the highest ablation pressure capsule material that we can make at this time and offers the best chance to control symmetry.” HDC capsules are currently produced by Diamond Materials in Germany and then shipped to General Atomics in San Diego, California, for additional work before being forwarded to Lawrence Livermore for final preparations.

Changes to the helium gas concentration inside the hohlraum also contributed to the success of the neutron-producing experiments. During the high-foot campaign, helium gas was used to slow the expansion of plasma from the hohlraums’s wall that interferes with the laser beams and contributes to implosion asymmetry. However, the high gas concentration increased laser–plasma instabilities (LPI), which induced time-varying asymmetries. Sharply lowering the helium gas concentration reduced LPI, increasing the conversion efficiency from laser energy to x rays by 20 to 25 percent. The change also improved the symmetry of the x rays driving the capsule inward. 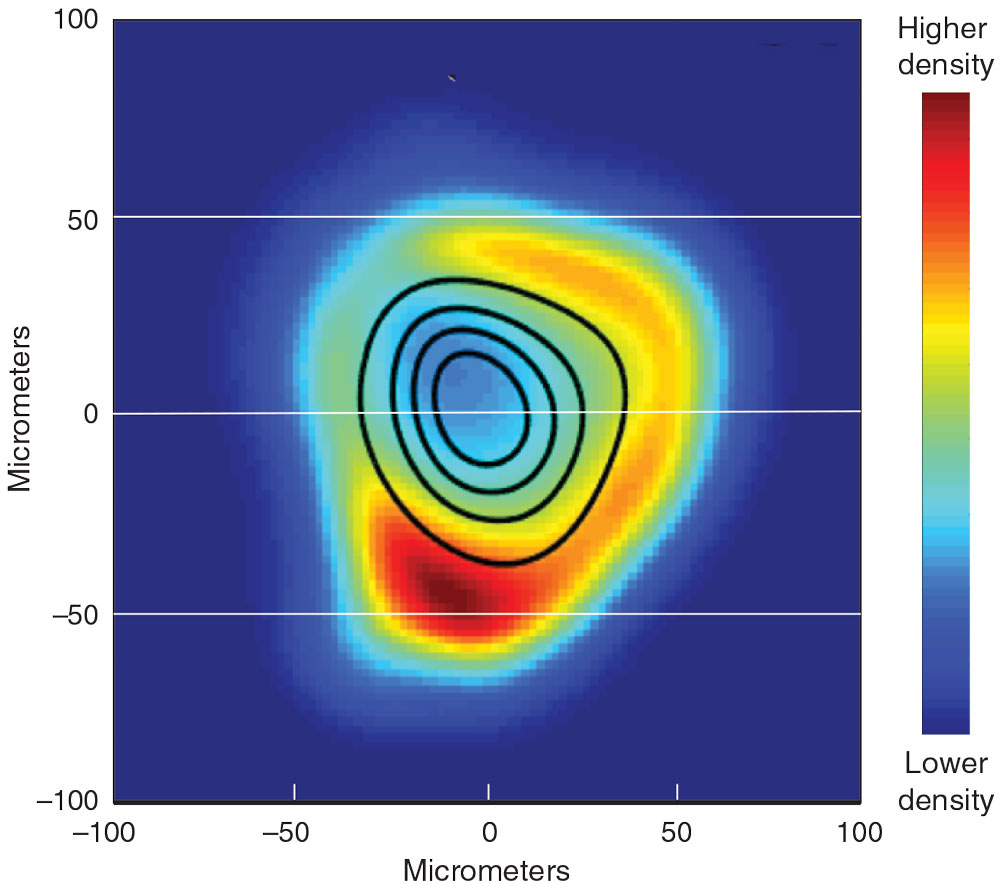 Data analysis of scattered neutrons in the hot spot of an ICF experiment yield images similar to this one. This image shows data from the January 2018 ICF experiment that produced a record 2.0 × 1016 neutrons and 55 kilojoules of energy. Color gradient indicates the level of neutron scattering.

To ultimately achieve ignition, NIF’s ICF team has made great progress in identifying performance-degrading factors and is developing the tools to mitigate them. For example, the diameter of the fill tube has been decreased from 10 to 5 micrometers to help reduce perturbations. “Our focus has been on systematically identifying limiting factors and then exploring ways to overcome them,” says Hurricane. “We are making important progress.”

Major scientific breakthroughs often stem from perseverance and building on discoveries made through the investigative process. NIF physicist Laura Berzak Hopkins says, “We have learned an incredible amount and are translating that knowledge into increased capsule performance. ICF experiments are a balance of different factors, but we have many ‘knobs’ we can turn for adjusting symmetry, and we have made substantial progress.”

Only a limited number of ICF shots are available annually, yet experimenters can run hundreds of simulations on the Laboratory’s family of powerful supercomputers to complement the tests. These simulations are continually refined as new experimental data are acquired.

For the upcoming experimental campaign, researchers are adopting many of the strategies that made the record-breaking 2017 experiments so successful. One focus is exploring the advantage offered by larger fuel capsules, which absorb more x-ray energy, allowing them to concentrate more energy into the hot spot and generate more fusion reactions. The 2017 experimental campaign used capsules with radii about 8 to 12 percent larger than their predecessors. Future experiments will feature fuel capsules with 25 percent larger radii. 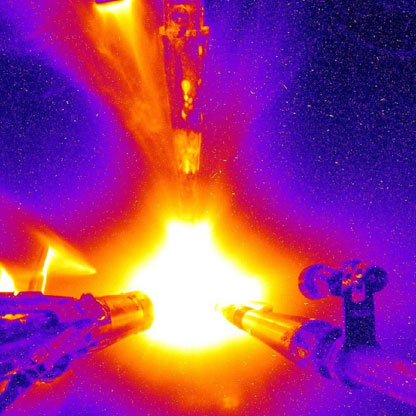 This colorized image shows the ICF program's first layered DT fusion implosion using the big-foot pulse strategy in a subscale HDC ablator. The big-foot platform uses a shortened three-shock pulse and a thinner DT ice layer that puts the fuel and the diamond ablator on a higher adiabat (resistance to compression) than previous designs.

The team is also investigating new hohlraum shapes. For example, researchers are studying the potential of an I-Raum, whose design features outward pockets to counteract the effect of hohlraum walls interacting with the incoming laser beams. In addition, they are testing alternatives to the ultrathin membranes that suspend the fuel capsule inside the hohlraum as well as shrinking the size of the fill tube even more to further improve implosion symmetry.

“Our focus has been on identifying and then overcoming limitations to chart the path forward toward ignition,” says Hurricane. “For a burning plasma, we need about 70 kilojoules and we now have 55 kilojoules. Six years ago, we attained only 2 kilojoules.” As researchers work to achieve a key milestone, they continue to obtain a deeper understanding of what is required for ignition, one of the most challenging scientific goals of the past 50 years.