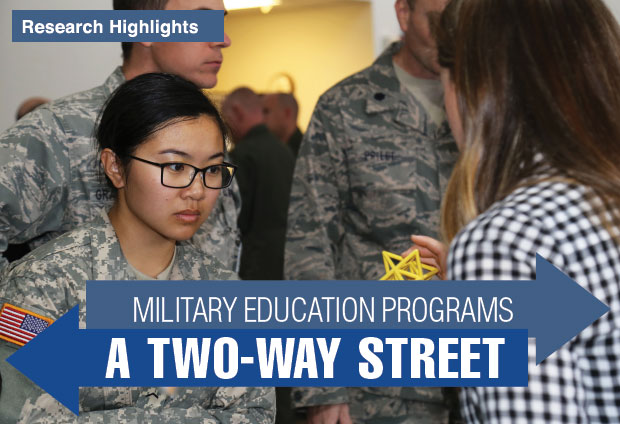 Lawrence Livermore’s connection with the U.S. military goes back to its very inception. Shortly after its founding in 1952, the Laboratory began hosting officers from the branches of the Armed Services with nuclear warfighting responsibilities (Army, Navy, and Air Force). These officers came to the Laboratory as military research associates, and their assignments lasted 2.5 years, on average. Over the course of the program, which the Department of Defense (DOD) concluded at the end of the Cold War, approximately 350 officers completed tours of duty in various scientific and engineering assignments.

Military education and outreach made a resurgence in the late 1990s, when Livermore human resources specialist Barry Goldman helped institute the Military Academic Research Associates program, with the mission of funding cadets and midshipmen from the service academies. In the same timeframe, the Laboratory implemented Reserve Officers Training Corps (ROTC) internships, wherein cadets and midshipmen are recruited nationally and brought on as summer hires for 12 weeks. The Newly Commissioned Officer program also offers three- to nine-month appointments for second lieutenants, as they await their first military assignments.

Today, new links continue to be forged through these and other military education and outreach programs offered by the Laboratory’s Office of Defense Coordination (ODC), which provides a unified point-of-contact to DOD. Annually, as part of the Air Force Fellows program, up to four participants come to the Laboratory for one year to familiarize themselves with Lawrence Livermore and the National Nuclear Security Administration (NNSA) and exchange ideas with Laboratory scientists. This exchange helps direct Livermore’s research efforts to be more applicable “in the field” and provides the fellows with insights into diverse national security issues.

The Air Force Fellows program dates back to 2004, when the military branch became concerned over the loss of nuclear expertise among its officers. At that time, Air Force Brigadier General Bob Smolen reached out to Livermore’s George Sakaldasis, a retired Air Force colonel then in the National Security Office, and together they established the fellows program. Holly Franz, who oversees military education programs for ODC, says, “The fellows act as translators from scientists to operators and back. They help ensure that the capabilities delivered by the Laboratory meet operational needs in the field.”

Fellows provide critical operational insight into various national defense research efforts, ensuring key emerging technologies are provided to the warfighter. Their input and participation in programmatic activities reinforces the Laboratory’s commitment to strengthening national security through research, development, and application of world-class science and technology. Fellows arrive for their yearlong stints in August. Their assignments begin with a week-long nuclear expertise course, a visit to the Nevada National Security Site, and the “Survey of Weapons Development and Technology” course offered by Sandia National Laboratories in Livermore, California. “The fellows get credit for intermediate development courses, just as if they were attending the Air Command and Staff College,” explains Sakaldasis, who now assists the ODC director, Chuck Lutes, on military affairs. 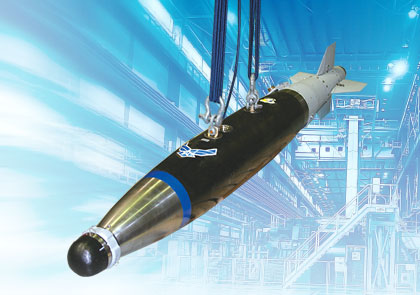 The BLU-129B warhead was developed at Livermore for the U.S. Air Force. The highly effective, low-collateral-damage munition allows troops to maneuver in tight, often densely populated areas while minimizing inadvertent casualties or destruction of infrastructure.

Over the years, the fellows have contributed to a range of Laboratory initiatives and programs, including counterproliferation, advanced conventional weapons, and life-extension programs (LEPs). “We provide them with assignments in their areas of expertise and interest that support Air Force missions,” says Franz. The Laboratory looks for officers with proficiency in technologies such as radar, photonics, laser systems, and software that focuses on modernization and optimization of the stockpile as well as cyber-warfare and technologies related to nuclear command, control, and communication.

A Breadth of Experience

Majors Chris Coleman and Andrew Paulsen, both B-52 weapons officers from the Air Force Global Strike Command, were fellows from 2017 to 2018. They found their time at Livermore to be educational and eye-opening. Paulsen says, “Instead of focusing on a single project, I chose to spend most of my fellowship interacting with different individuals in as many areas as I could. Taking this approach allowed me to build a foundation for a spectrum of projects ranging from conventional low-collateral-damage weapons, advancements in additive manufacturing, ongoing projects within the nuclear enterprise, and more.” Coleman adds, “To be honest, I was largely an active sponge during my time at Livermore, trying to understand and experience as much as I could in that year.” He was initially drawn to the weapons program, with distinct interests in warhead survivability and LEPs. “However, what really made my experience valuable was the flexibility provided by the ODC program,” he says.

Through Coleman’s initial contact, he met others who worked in multiple or branching programs ranging from high-powered computing applications, conventional weapons design, advanced manufacturing, and the Laboratory’s intelligence program. “Although I am sure I did not even scratch the surface of Lawrence Livermore’s capabilities, the breadth of experience I was given during my limited time at the site demonstrated to me the tremendous scope of the Stockpile Stewardship Program and how Livermore capitalizes on the science and technologies that result from the program to provide potential cost-effective modernization technologies relevant to both civilian and military applications,” he says. Coleman also worked with Paulsen and Livermore’s Matthew Weingart in ongoing efforts to educate the warfighter on the capabilities of the Livermore-designed, low-collateral-damage BLU-129B munition and to expand current DOD modeling and simulation capabilities regarding the weapon. (See S&TR, March 2013, Advanced Engineering Delivers More Exact Weapons Performance.)

For this program year, the Laboratory is hosting Major Daniel Gebhardt, Major Bryan Kelly, Major Michael C. Valdivia, and Air Force civilian Cara Jones. Kelly, working alongside members of Livermore’s science and technology community, is eager to learn about the various key emerging technologies at Livermore and to share his DOD perspective, where applicable. “I am researching the role of testing in aircraft software development,” he explains. “As such, I converse weekly with Livermore’s software development teams to further my knowledge of modern test tools and where they best fit into various aircraft software development frameworks.” He also wants to learn more about the Laboratory’s light-field directing array technology and ultimately contribute to its test planning. 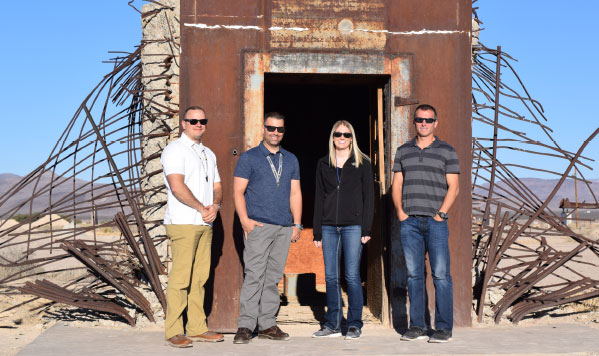 Air Force Fellows (from left to right) Major Daniel Gebhardt, Major Michael Valdivia, civilian Cara Jones, and Major Bryan Kelly spent a week at the Nevada National Security Site as part of their Laboratory assignment. The building in the background is a bank vault (designed by the Mosler Safe Company). The vault was constructed for the Priscilla test, conducted in June 1957.

Jones anticipates broadening her knowledge on the science and technology aspects of the nuclear enterprise and ultimately returning to the Air Force with a deeper understanding of, and appreciation for, how the Laboratory contributes to nuclear deterrence. She adds, “I am excited to provide an Air Force perspective and contribute to Laboratory projects.” Jones, Gebhardt, and Valdivia are working on a joint project to explore the progression of the nuclear weapons testing program from its earliest post–World War II origins to the present, from a scientific and geopolitical perspective. The goal is to gain insights from the past into what the next possible “abrupt change” might be that could trigger a shift in how the nation’s stockpile readiness is evaluated.

Laboratory support for military education and active duty personnel continues to expand, notes Franz. For instance, the Laboratory offers a monthly NNSA Nuclear Enterprise course for the professional development programs given to personnel in the 20th Air Force ICBM (intercontinental ballistic missile) Center of Excellence and the 8th Air Force. This 3-day course is attended by 10 to 20 senior enlisted personnel and junior to mid-level officers. ODC also hosts students from the Naval Postgraduate School (NPS) in Monterey, California, who come to Livermore to perform research. In addition, the Laboratory sponsors an annual ROTC Day, which is an opportunity for ROTC cadets, midshipmen, and cadre to learn about Laboratory programs supporting DOD, the military, and national security. 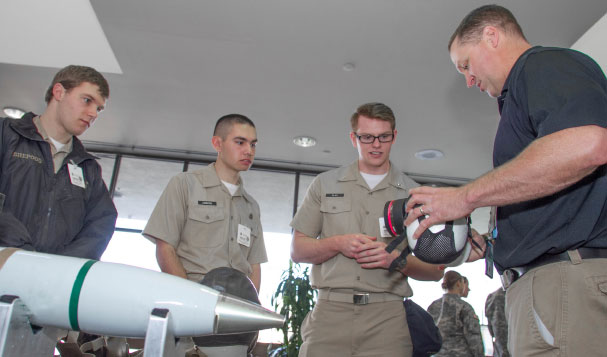 The annual Reserve Officers Training Corps (ROTC) Day is sponsored by Livermore's Office of Defense Coordination and the Strategic Human Resources Management Directorate. During the event, attendees learn about the Laboratory as well as internship and career opportunities offered through the ROTC internship program and the Newly Commissioned Officer program. (Photo by Julie Russell.)

Lawrence Livermore recognizes the importance of education and supporting current and future military leaders as they advance throughout their careers. Toward this goal, the Laboratory takes steps to understand trends in science and technology as it applies to the institution’s national security missions, and makes connections, fosters relationships, and enhances communication between members of the armed forces and Laboratory staff. Notes Major Paulsen, “One of the most valuable aspects of my time at Livermore was the interactions and relationships I formed throughout the year. The chance to work alongside many of the Laboratory’s experts was a tremendous opportunity that helped shape my own perspectives and understanding of some of the most difficult national security problems the nation faces today.”