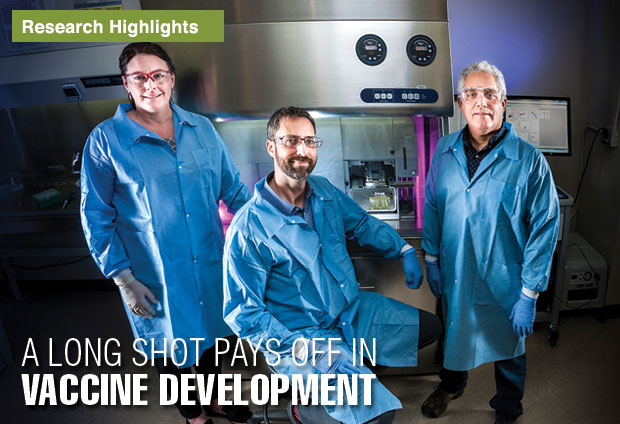 Lawrence Livermore biologists (from left) Amy Rasley, Nicholas Fischer, and Matthew Coleman pose in front of a flow cytometer. Using this system, the team performs multicolor flow cytometry and high-throughput cell sorting to interrogate immune cell populations of interest. Their aim is to understand the mechanisms by which their vaccine formulation protects against Francisella tularensis, the bacterium that causes tularemia. (Photo by Randy Wong.)

A Long Shot Pays Off in Vaccine Development

Vaccines teach the immune system to fight disease by mimicking what the body would encounter during a natural infection. The immune system’s response to a live bacteria or virus is similar to its reaction to the attenuated (weakened) or inactivated (dead) version of a pathogen used in a vaccine. After vaccination, reexposure to the live microbe causes the body’s immune system to “recall” the prior reaction, stopping the infection more quickly than it would have without the initial encounter. This immunological memory is the basis for vaccine-mediated protection.

Many licensed vaccines use attenuated viruses or bacteria, which stimulate a strong response and confer robust immunity, but these types of vaccines have some drawbacks. Individuals with immune deficiencies may be unable to receive them safely. Furthermore, the attenuated microbe, once inside the human body, could mutate into a more virulent form—although this scenario is unlikely. In addition, live vaccines must be stored at low temperatures and therefore may be impractical for areas with limited refrigeration, such as war zones and developing regions. Inactivated vaccines, on the other hand, cannot mutate, are safe for nearly everyone, and can often be transported without refrigeration. Unfortunately, most inactivated vaccines, which provoke a weaker immune response than do live vaccines, may require booster shots to maintain immunity and so may provide only partial protection against exposure.

A different type of vaccine—one that uses components of a pathogen rather than the whole organism—could offer the best of both worlds. Subunit vaccines incorporate only those parts of a disease-causing microbe that best activate the body’s immune system against the pathogen—namely, uniquely identifiable marker molecules called antigens. The potential advantages of such a vaccine are substantial—less variability between doses, fewer adverse or unintended reactions, and more freedom to formulate the vaccine for optimal immune response. Of course, subunit vaccines present their own challenges for researchers, particularly in identifying the right antigen formula to protect against a pathogen and finding the most efficient and effective method of delivery.

As part of efforts to defend soldiers and first responders against bioterrorism and biowarfare, Lawrence Livermore researchers have made exciting breakthroughs in subunit vaccine research. In vivo rodent studies, for instance, have shown that Livermore’s nanoparticle delivery platform increases the efficacy of subunit vaccines, making the approach viable for a range of bacterial and viral threats. More recently, with support from the Laboratory Directed Research and Development Program and the Defense Threat Reduction Agency, a team of Laboratory scientists and their academic collaborators became the first to demonstrate a subunit vaccine capable of providing 100 percent protection in test animals against Francisella tularensis, the pathogen that causes the dangerous disease tularemia. 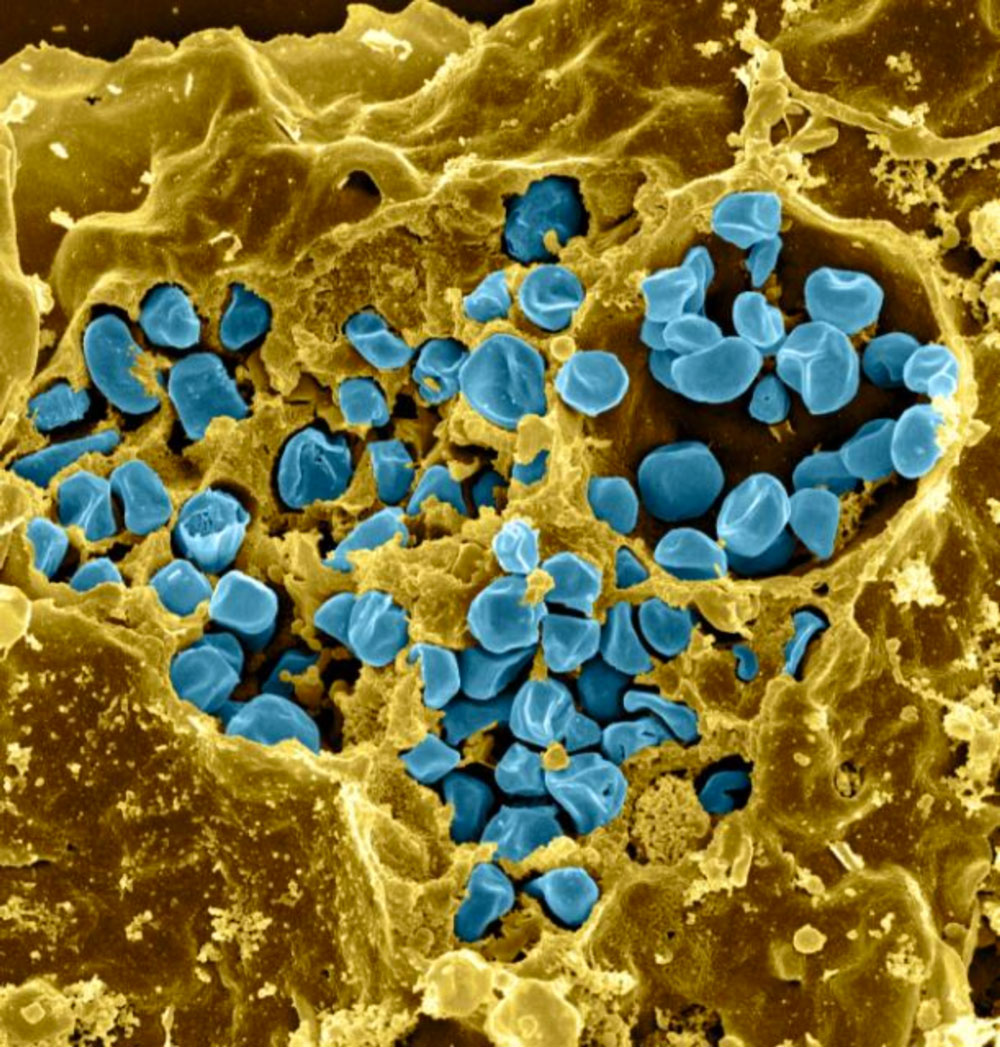 For the past eight years, Laboratory researchers have been developing and refining a platform for drug and subunit vaccine delivery based on tiny, disk-shaped structures called nanolipoproteins (NLPs). These closely resemble the good and bad cholesterol particles that move fats through the bloodstream and thus are unlikely to be flagged by the immune system as a foreign invader. Tests in mice and rats indicate that when antigens and other vaccine elements are attached to NLPs through a relatively simple process, the resulting vaccine elicits a stronger and more targeted immune response than when the components are administered separately. (See S&TR, September 2012, Building New Vaccines for the 21st Century.) In a collaborative effort, Livermore scientists have worked with numerous universities and companies to develop this approach.

“Subunit vaccines commonly consist of proteins from the pathogen of interest and molecules called adjuvants that further stimulate host immune response, together with materials to effectively deliver them in vivo,” explains biologist Nicholas Fischer. “With the NLP platform, we can combine all these components in a single vehicle, so that all the pieces are delivered to every cell that internalizes the NLPs, all at the same time.” He adds that NLPs, which range between 8 and 25 nanometers in diameter, are the perfect size to take advantage of natural paths into cells, particularly immune cells relevant to vaccine delivery. Moreover, the researchers have shown that NLP subunit vaccines can be freeze dried, stored for months at room temperature, and rehydrated without losing their potency.

Nanolipoprotein particles (NLPs) are produced by mixing scaffold proteins and lipids with a surfactant. When the surfactant is removed through dialysis, the proteins and lipids self-assemble into a disklike structure. The resulting NLP provides a platform for attaching other molecules to produce a potent, safe, and targeted vaccine.

So far the biggest test of the team’s promising NLP platform has been the development of a subunit vaccine for F. tularensis, one of the most infectious bacterial pathogens in existence. (See S&TR, July/August 2010, Insight into a Deadly Disease.) F. tularensis can infect an extremely broad range of hosts—more than 200 different animal species—and has a high mortality rate even at very low infectious doses—as few as 10 organisms. This rare but reemerging pathogen is most often spread by insect bites or inhaling contaminated particles but is also considered a potential bioterrorism agent. Despite decades of intensive research, no vaccine approved for widespread use yet exists. Leading live-vaccine candidates not only have significant side effects but also pose a substantial mutation risk because of their reliance on an attenuated bacterium with just a single genetic modification.

Vaccine development is rarely quick or easy, but the path to success for a F. tularensis vaccine has been strewn with a greater-than-usual number of obstacles. Research on such biothreat agents requires advanced containment facilities, of which a limited number exist. Furthermore, past studies have lacked standardization in such areas as the species and genetic strain of the test animal and the bacterial strain used, making it difficult for researchers to compare with and build on previous findings. For example, mice have been used extensively to study immune response to F. tularensis but are not an optimal choice because of their high susceptibility to all strains, even those that do not cause illness in humans. Researchers now use a type of rat for such studies that better mimics human vulnerability to the pathogen.

According to Amy Rasley, Livermore biomedical scientist and F. tularensis vaccine development project lead, the biggest challenge is that biologists only partially understand the specific immune responses that a successful vaccine should provoke to this complex organism. She explains, “Most routine childhood vaccines focus on generating antibody responses. Past research suggests that antibody production is essential but not sufficient for protection against tularemia. Success rates for any vaccine drop when multiple immune responses are needed to combat the pathogen.” Given the relative rarity of the illness in humans and the incomplete understanding of what constitutes a protective immune response, vaccine researchers must rely on rigorous experimentation and iteration, as well as patience.

Settling on the Right Combination

The initial Livermore approach was relatively simple. Building on previous F. tularensis studies, researchers created an NLP-based vaccine formula and used it to inoculate rodents. A few weeks later, the animals were exposed to a highly virulent, aerosolized form of F. tularensis to assess the degree of protection—whether the animals became ill, whether ailing animals recovered or died, and what the death rate was. Over a four-year period, the team tested dozens of antigen–adjuvant combinations, concentrations, delivery routes, and dosing schedules but never achieved more than 20 percent protection. “It was heartbreaking,” confesses Rasley. “Something is definitely unique about F. tularensis that makes vaccine development exceedingly difficult.”

However, a breakthrough came after Rasley and colleagues partnered with researchers at the University of New Mexico who were studying some of the same vaccine ingredients as the Livermore team for a different vaccine platform, one based on attenuated Listeria monocytogenes bacteria. Combining data from both teams led to the development of a multiple-antigen vaccine capable of stimulating strong antibody and T cell responses. The two teams found that using a combination of antigen types was critical—single antigens alone afforded only partial protection. Indeed, when Livermore researchers incorporated multiple antigens along with a promising adjuvant into their NLP platform, 100 percent protection against tularemia was achieved. 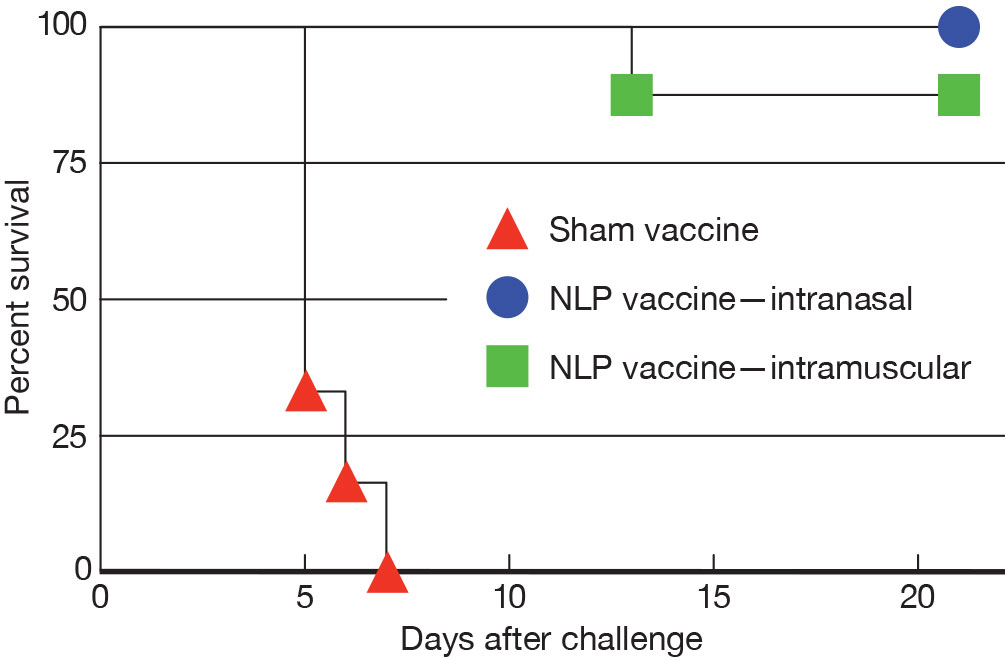 Test results indicate the efficacy of a tularemia subunit vaccine formula based on the NLP vaccine delivery platform. Up to 100 percent of vaccinated rats survived a bacterial challenge, depending on delivery method, as compared with the 0 percent survival rate of unvaccinated rats.

Interestingly, the team found that the survival rate was influenced by the vaccination route. All rats vaccinated through the nose survived, whereas only 90 percent of those vaccinated through muscle tissue did. Rasley speculates that generating a robust immune response in the lungs, as nasal delivery does, must be particularly important in combating tularemia. Rats vaccinated nasally also had less severe disease symptoms than their intramuscularly vaccinated cohorts.

From What to Why

After identifying an effective vaccine, the team set out to understand why the formula works—a challenging investigation made somewhat easier by the subunit vaccine’s relative simplicity and strict standardization. Fischer explains, “Determining what protects the host in a vaccine based on a whole, attenuated bacterium can be difficult because of the hundreds of synergistic components involved. In contrast, our formulation has only three components, so we can sort out the protection mechanism systematically. Once we understand the mechanism, we can see why it’s working and identify correlates.”

Correlates are additional standards by which the researchers can determine whether the vaccinated animals are protected, beyond simply testing whether the animal survives exposure. Identifying these correlates will be crucial for subsequent evaluations of how effective these vaccines are in other animal species, as well as in humans. Determining the protection mechanisms and correlates will occupy the next three to five years, according to Rasley. “We have a lot of important science to do,” she states. The team is also reaching out to companies that specialize in producing vaccines at scale in accordance with reliable manufacturing processes. Although the Laboratory will not be commercially releasing the vaccine, demonstrating viable manufacturing at scale is another key step on the long path to vaccine approval and distribution—and the ultimate goal of robust protection against a dangerous pathogen.