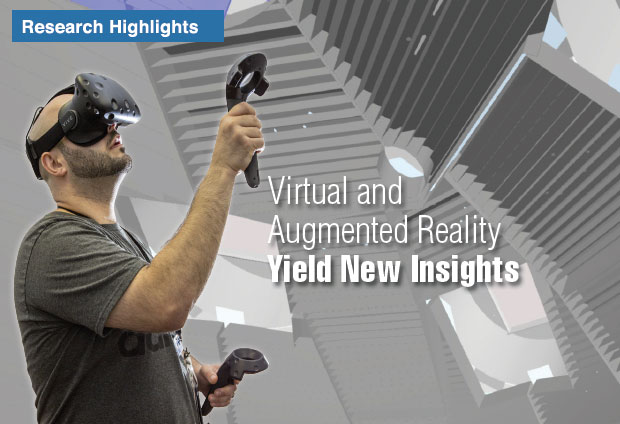 The 192 laser beams of the massive National Ignition Facility (NIF) converge at the center of its giant, spherical target chamber through 48 symmetrically distributed portholes. Interspersed among these portholes is an array of other ports used for equipment with functions ranging from holding and positioning fusion targets to detecting what happens after the targets are hit by the laser beams. Although the target chamber is 10 meters in diameter—the size of a small hot air balloon—gaining access to its outer wall proves challenging because of ever-increasing congestion. A majority of the nearly 200 ports are already in use, leaving only a small fraction unclaimed and unobstructed. As the variety of experiments running on NIF increases, so does the demand placed on this limited and valuable real estate.

Now, leading-edge simulation technologies are helping researchers go beyond reality to help answer the question of exactly what is possible at NIF. Considering the facility’s enormous complexity and demanding requirements—as well as the power and energy involved with experiments and the potential hazards that must be safely contained­­—methods that more effectively answer this question also help NIF achieve its myriad operational goals.

Bruno Van Wonterghem, NIF’s operations manager, must ensure the facility is up and running around the clock for current users and is well prepared for future experiments and improvements. He explains, “As we fill up seemingly every cubic centimeter of space around the target chamber, it gets harder and harder to determine exactly where new equipment will go and how we will operate and maintain it all. Turning to virtual and augmented reality to evaluate scenarios ahead of time gives us insight that we never had before.” These two approaches differ in that virtual reality (VR) is a completely immersive experience in which everything the user sees is simulated, similar to playing a videogame. In contrast, augmented reality (AR) superimposes computerized images over the user’s real-life field of view. Besides using VR and AR for practical engineering and mechanical applications to maintain and expand operations, NIF also uses these computerized visualization tools to give hands-on, realistic experiences that connect people to a realm that is ordinarily out of reach.

In a building separate from the NIF facility, a technician stands alone in a room tethered to a wire dangling from the ceiling. A virtual representation of a 14-kilogram, louvred panel drifts in front of him. Wearing VR goggles and clutching hand-held controllers, he explores part of one of the largest and most complex virtual environments in the world. The panel represents part of the segmented stainless-steel wall that lines the inside of the NIF target chamber, providing a protective barrier against the shrapnel and debris generated when NIF’s laser beams blow apart experimental targets. The panel also absorbs stray laser light, preventing reflections from entering the beamlines and damaging components. 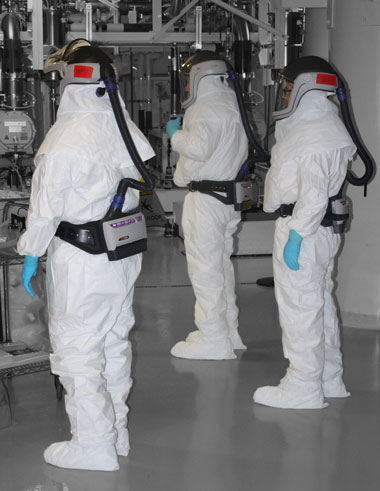 Before entering the hazardous environment inside the target chamber to replace panels, technicians have already trained with VR to familiarize themselves with the replacement procedure. (Photo by Dan Linehan.)

To accommodate new equipment for additional experiments, panels that completely cover inactive ports are being replaced with those containing cutouts to allow access into the target chamber. These covered ports were once considered excess inventory but are now a valuable commodity. In his VR world, the technician grabs and repositions the new panel to fit it into the wall similar to a giant jigsaw puzzle piece. VR training allows him to practice this challenging replacement procedure without having to wear the usual two layers of protective hazmat suits, fully enclosed helmet, and respirator. Normally, the work requires him to spend many hours at a time suspended high above the target chamber floor, in close confinement in a hazardous environment, and tasked with potentially risky mechanical activities. Virtual training reduces risks.

Typically, a user inside NIF’s VR world can freely move around side-to-side and up-and-down inside and outside of the target chamber as if the laws of gravity did not exist. For this particular training exercise, mechanical designer Paul Bloom, who maintains the NIF VR model for the Virtual Immersion Engineering (VIE) group, programmed a simulation to closely match the actual sequence of replacement. “The user can look in all directions while the simulation is running and also pause the sequence to manipulate parts as if they were actually being handled,” says Bloom. “However, for this application, the user is anchored in space and cannot freely walk around.” This limitation is in place because movement is similarly restricted in the real world. Two technicians performing actual panel replacements will work side-​by-side inside a small safety cage attached to a lift that elevates them more than 12 meters above the target chamber’s basement floor. Using VR training gives the technicians a feel for being inside the target chamber by providing realistic familiarization and a sense of situational awareness that translates directly to the real world.

NIF technicians are not the only ones gaining valuable understanding by using VR to experience the inside of the target chamber. The technology also benefits the wide range of visitors who flock to NIF each year for one of hundreds of hour-long tours. These visits expose thousands of people to NIF’s NASA-like mission control room, the master oscillator room—the source of laser light—and one of the two gigantic laser bays, where the laser light is split into 192 beams and magnified in energy by a factor of 4 quadrillion. Having doubled for the starship Enterprise’s warp core in the movie Star Trek Into Darkness, the target chamber steals the show, but for tour participants it can still be as elusive as a cloaked Klingon vessel. NIF is a working research facility, where experiments take precedent over visitors. Consequently, over half of all NIF tours are prevented from seeing the target chamber while it is sealed off during operation. 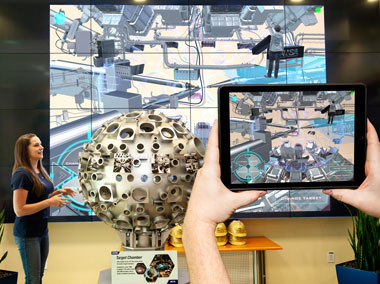 A computer tablet transforms a scale model of NIF’s target chamber into augmented reality (AR) and VR views, which are also displayed on a giant video wall inside NIF’s lobby. (Image by Mark Meamber.)

In 2015, Pam Spears, supervisor in the Technical Information Department (TID), and her team were first exposed to the VR possibilities of Bloom’s decade-long three-dimensional (3D) visualization work. Just prior to this, the team had also attended an AR demonstration by 3D animators in TID’s Visualization group during a student outreach event. These two meetings inspired Spears’s team to develop an AR–VR tool for NIF tours with the help of the TID Visualization and NIF VIE groups. “If you cannot see the target chamber for yourself during a tour, then AR and VR offer the next best thing. In some cases, it’s even better,” states Spears. “The tool allows people to quickly understand the excitement, science, tiny details, and sheer magnitude of what’s happening at NIF.”

Inspired by TID’s AR–VR tool, Bloom saw how AR could help find ports for new equipment by looking at the problem in reverse. He realized that with an understanding of actual space constraints around available ports, equipment designs could be tested on the target chamber before any physical pieces were assembled. This goal was achieved this year with AR converted from computer-assisted design (CAD) drawings. Describing the challenges of conversion, TID 3D animator Adam Connell says, “We’re interested in the outer surfaces because the objects are large, complex, and must be viewable from a distance. For instance, with the AR–VR tool in NIF’s lobby, CAD drawings give us the shape and scale but also much more detail than we need. For the images to appear realistic without looking jittery, we have to remove all excess geometry and then run smoothing algorithms.”

After such initial simplifications, yielding believable AR then requires adding detail. Jake Long, a TID 3D animator who provided the finishing touches, says, “We want to match the actual properties of the object to make it look photo realistic, including textures and lighting. The more such detail we add, the more the objects look as if they are really there.” 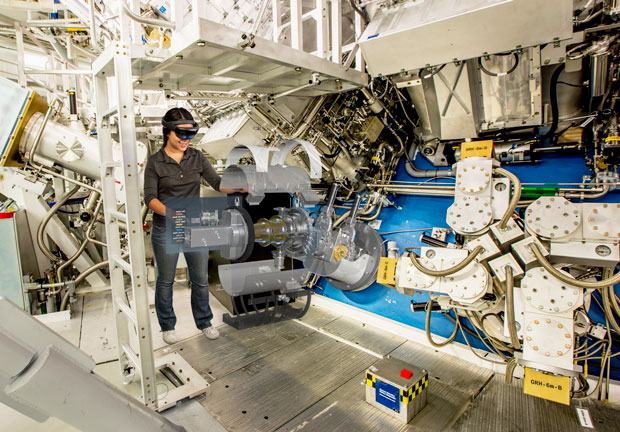 A composite image shows the exploded view that mechanical engineer Samantha Clements sees of a diagnostic (gray) that, in photo-realistic AR, is attached to an unclaimed port on NIF’s target chamber wall. (Image by Jason Laurea and Brian Chavez.)

With AR goggles containing a computer and multiple cameras, an engineer can walk around inspecting equipment clearances from every angle. The equipment is visualized by AR and attached to a port with the help of technicians using VR. Similarly, NIF visitors can use both AR and VR to gain a better understanding of how the pieces all fit together. As additional needs and applications arise, the mixture of AR and VR will continue inspiring advancements and yielding new insights.